On September 8th, the Mayor rolled out the city’s Pathways Home plan to address the homeless crisis. It’s almost five months later, and last week the Council got its first status update on how things are coming along.

Short answer: they’ve been doing a lot of talking with their partners and with the public, they’ve made a few decisions, but very little has happened that actually makes things better for homeless people in our city.

The Council was briefed by Jason Johnson, Deputy Director of HSD, along with two “strategic advisors” on HSD’s payroll: Dusty Olson and Sola Plumacher. They were joined by Kira Zylstra, Assistant Director of All Home, and Chloe Gale who co-directs the REACH program, the city’s contracted provider of outreach services. 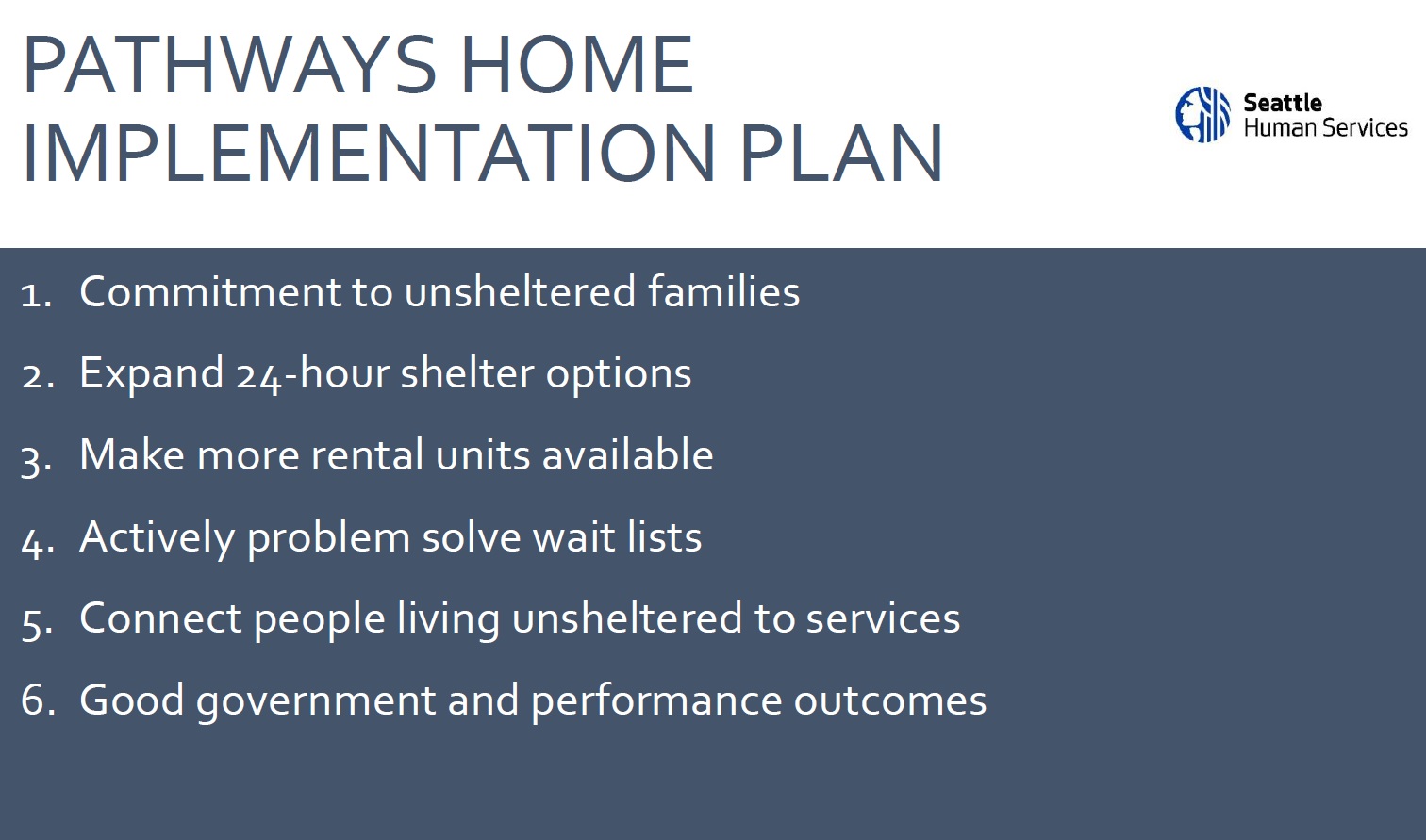 Quite frankly, there hasn’t been much substantive progress on any of them; much of the last five months has been spent in “public engagement” and in negotiating terms with partner organizations and providers. 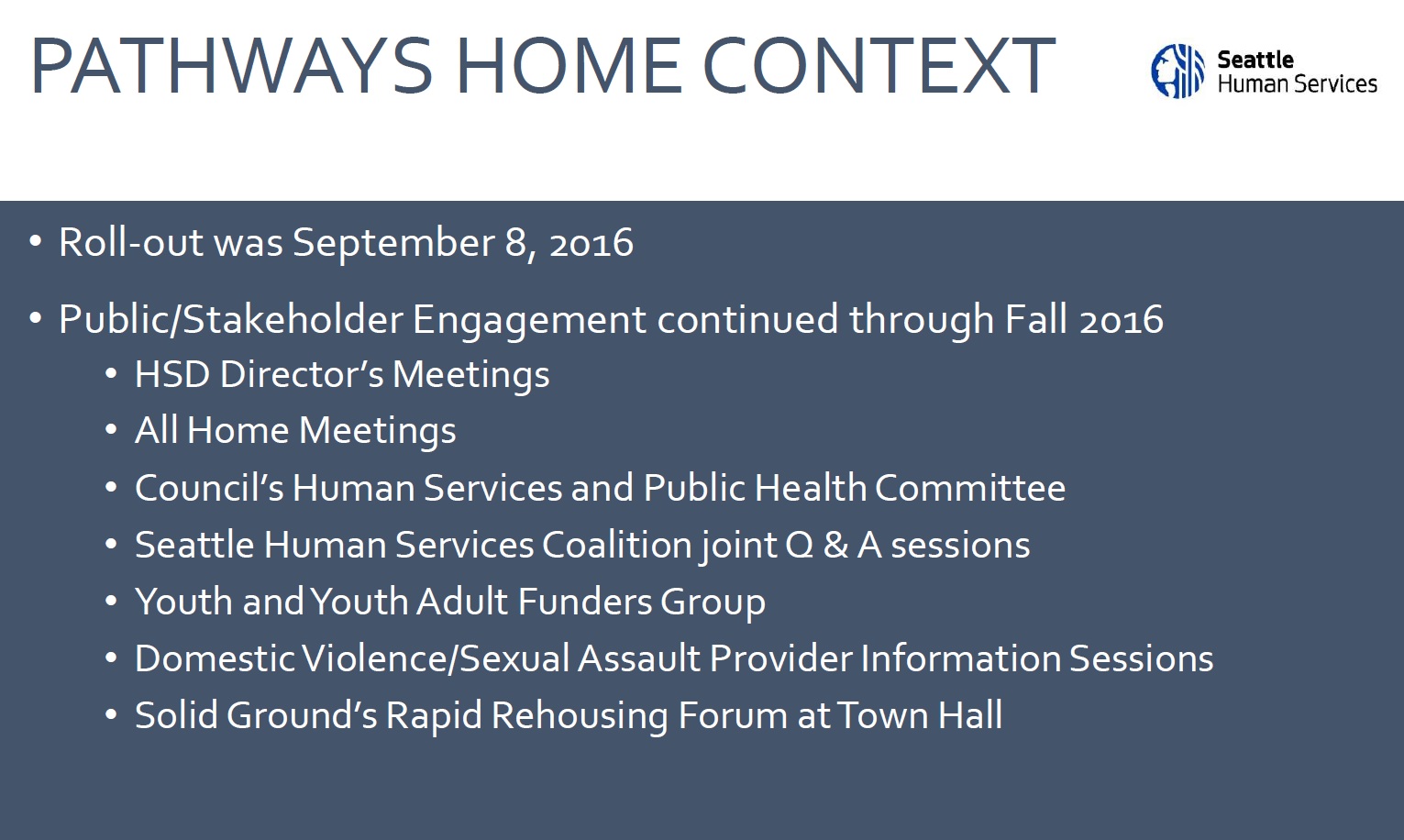 On the “commitment to unsheltered families:”

In September, they said, they had 500 families on their queue for housing. Today, the number in their queue is more than double that. HSD doesn’t attribute that to an increase in homelessness; rather, they believe they are doing a better job of identifying unsheltered families out there. Still, it also speaks to the fact that they aren’t making much progress in moving families off the list and into housing.

They claim to have many things “underway,” including a recommended change that prioritizes families with a child under one year old higher than those with older children. They also still plan to stand up a “family impact team” (an item on the original September rollout plan) that will focus specifically on matching homeless families to housing and services through a “by-name list.” They are also trying to fix some of the bureaucratic hangups, such as making sure that existing shelters don’t have unused capacity, and changing their protocols so that the most vulnerable families have access to rapid rehousing resources as well as permanent supportive housing (many don’t qualify for the latter, but that’s the default resource offered to those categorized as most vulnerable).

Progress on 24-hour shelters is maddeningly slow. The much-hyped Navigation Center has two providers signed up to operate it, but still doesn’t have a site identified — and Johnson was unable to give any sort of timeline for when it would be identified. They are spinning up short-term coping mechanisms in the meantime, including offering the services intended to be in the Navigation Center as “pop up services” in the field. They also closed the “Bridging the Gap” RFP for innovative shelter options to submissions last week and are busy evaluating the proposals they received. In the mean time, the private sector is out-performing them: last week Mary’s Place announced that it had received $4.5 million in contributions from Starbucks, Microsoft and several other companies for new 24-hour shelter spaces.

The results so far on the effort to make more rental units available are downright depressing. The city put out an RFP for a provider to run a new Housing Resource Center to replace the current Landlord Liaison program run under contract by YMCA. The RFP failed to land a provider, and the city has gone back to the drawing board with King County, All Home and United Way to try again with the hope of having the new program up and running by July.

On the effort to “actively problem-solve the wait lists:” the intent is to have four “by-name lists” of the highest priority homeless people, with a team associated with each to work with the people on the list and match them to the best services to help them.  Three of the lists (Youth and Young Adults, Long-term Shelter Stayers, and Families) are “underway,” meaning that HSD is having ongoing talks with its partners and providers on the proper “frameworks” and priorities. The fourth, the “unsheltered,” hasn’t even started yet.

“Connecting unsheltered people to services” basically comes down to “outreach.” Outreach in Seattle and King County has been a mess, with multiple providers — all with different levels of training, different priorities, serving different but overlapping subgroups, with different knowledge of and connections to housing, treatment and other services, and with inconsistent data collection practices and use of the county’s HMIS system to records and share data about the people they interact with. The big effort this past fall was to convene a summit, co-organized by HSD, REACH and All Home to standardize outreach: assessing and defining it, developing a standard of practice for all outreach providers, and developing tools for coordination of care — especially Coordinated Entry: the process through which homeless people enter the system, receive a personalized assessment of their needs, and are referred to a set of services that best match them. The report of this summit has been published. 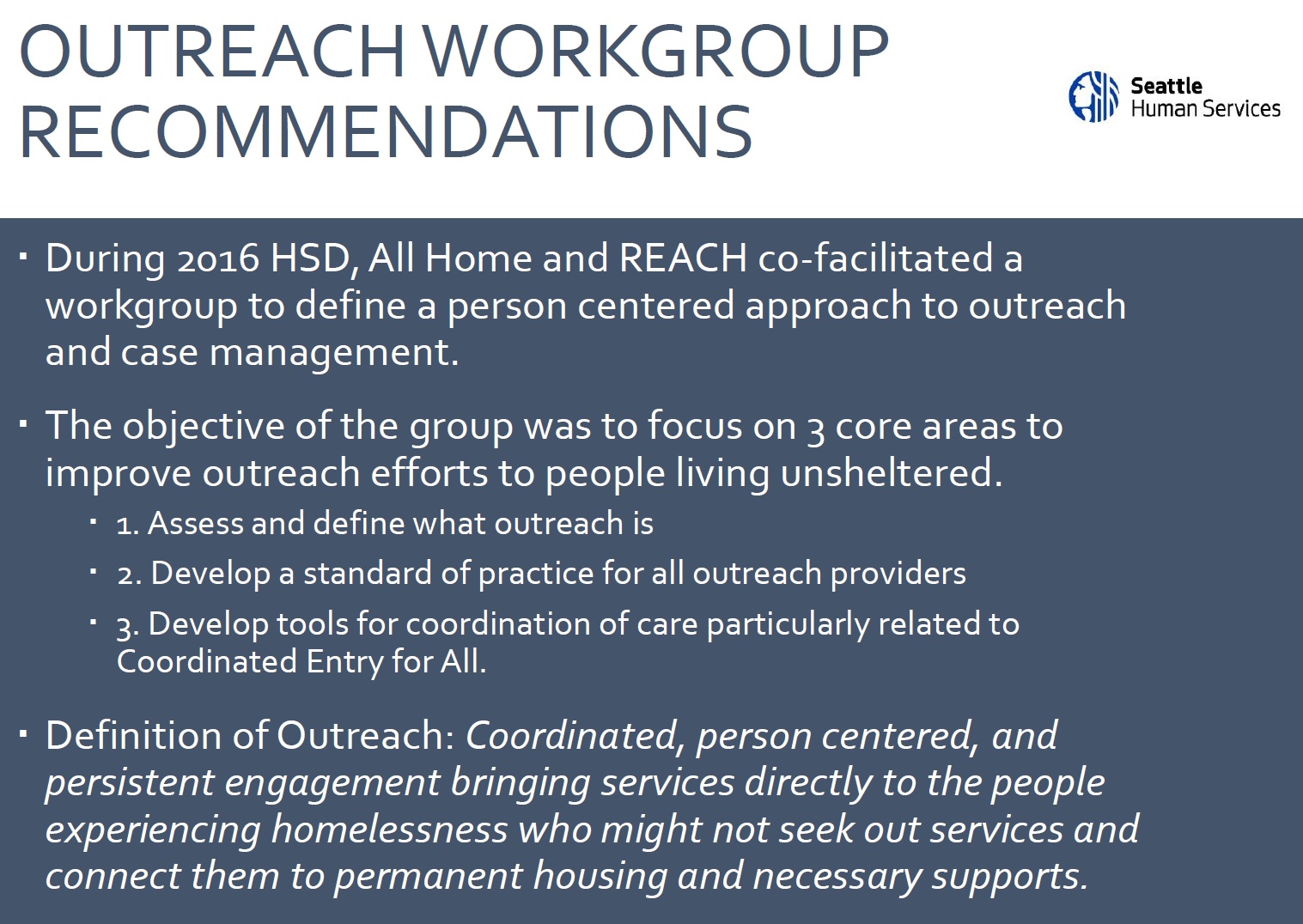 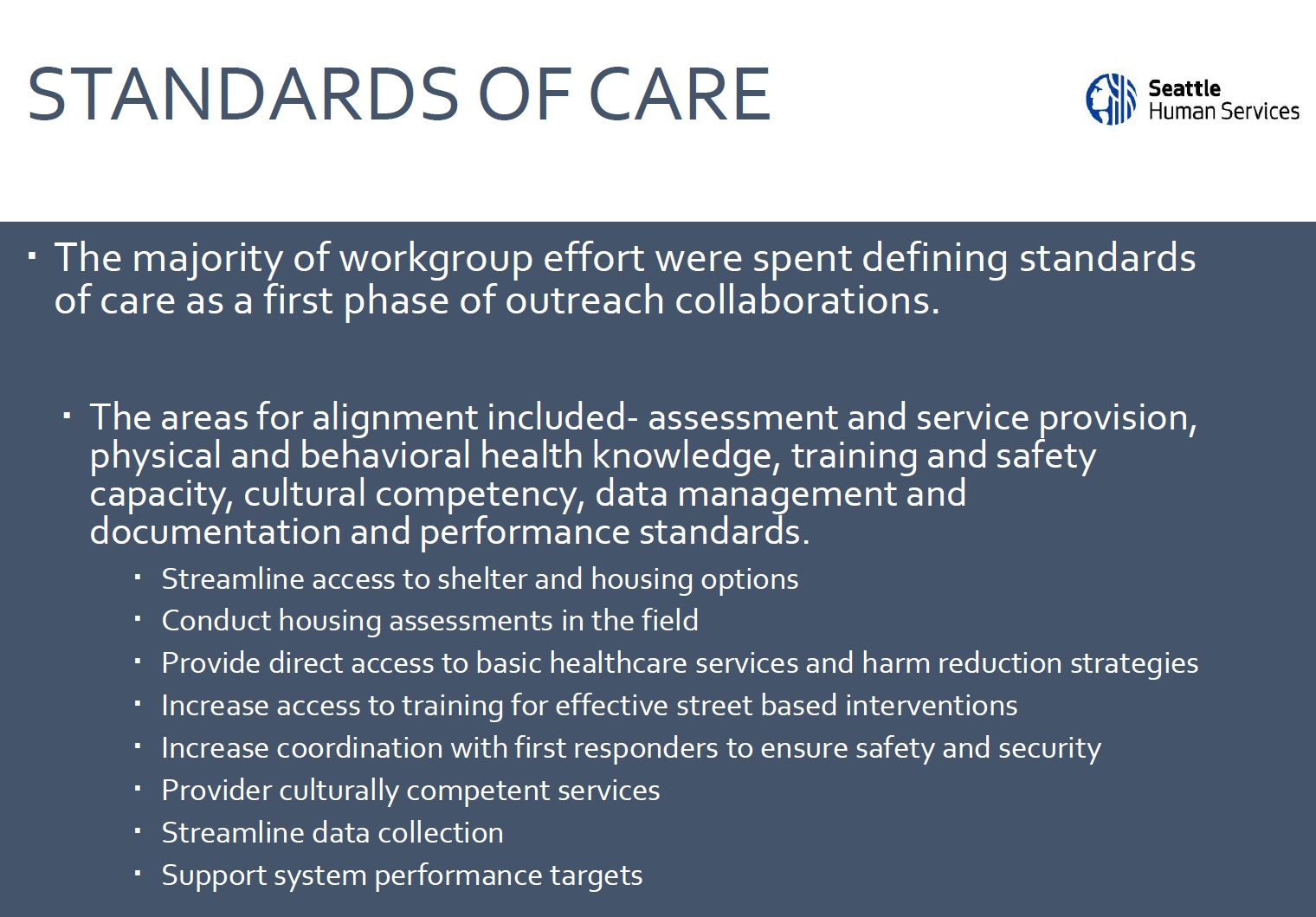 Last fall in the budget deliberations, the City Council put a proviso in place that froze funds for outreach contracts until a standard for outreach was agreed upon; HSD believes they have now met that requirement and are asking the Council to lift the proviso. Council member Bagshaw agreed, and committed to moving forward legislation to do that. So at least this is some progress, even if it took months.

The Coordinated Entry system is still not up and running for everyone, but HSD and All Home hope to have it in place by mid-February so all providers can be using it. 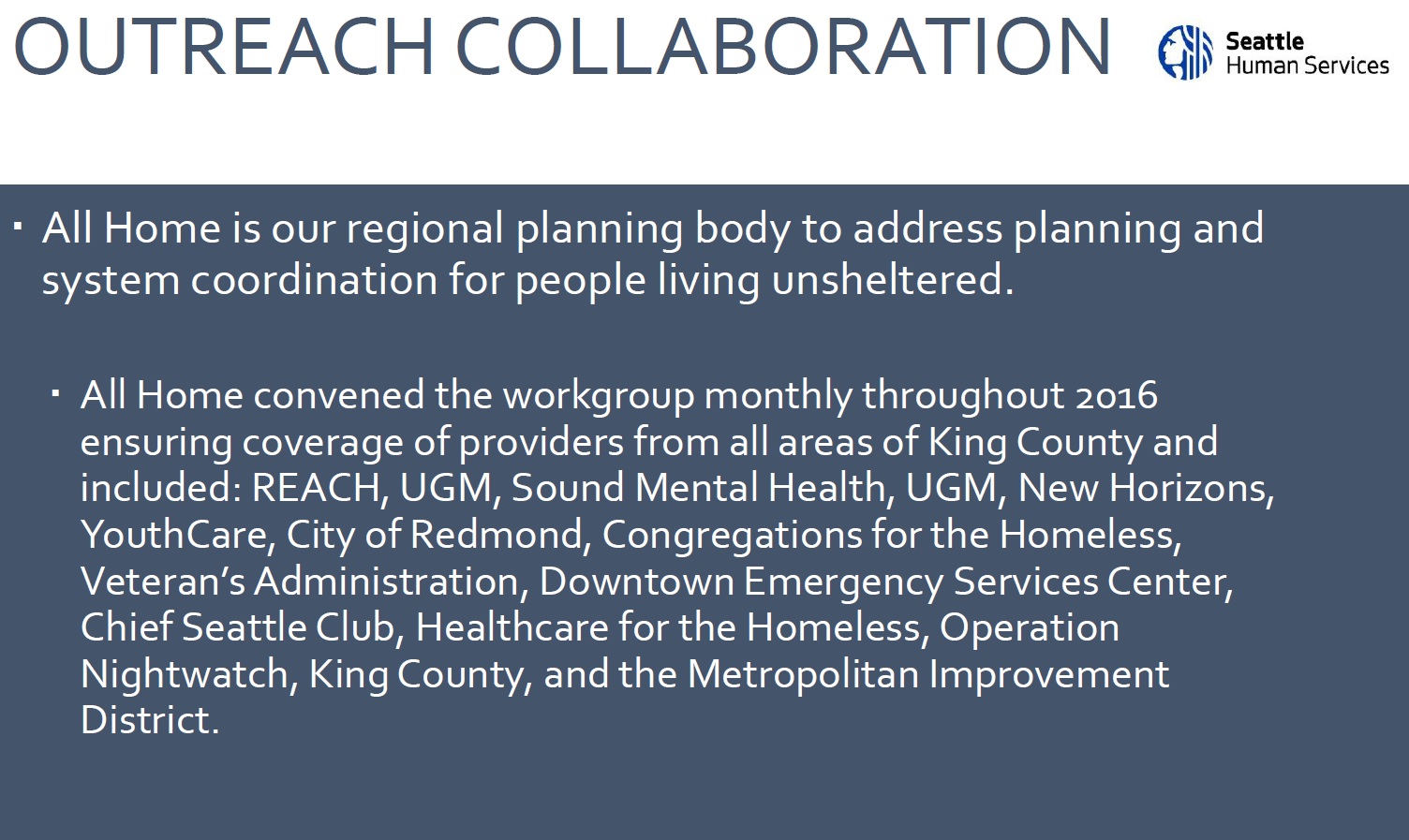 On “Good Governance and Performance Outcomes,” HSD said that they have come to agreement with King County and All Home on common system wide performance standards, which are integrated into all new contracts in 2017 for measurement and monitoring.  HSD is also developing a “performance dashboard” in partnership with the City Budget Office’s performance management team.

To sum up: there has been a lot of talking across organizations, and a few important issues have been sorted out. But to date, what’s happening on the street is still what was happening on the street back in September. Coordinated Entry still isn’t in place, outreach is still inconsistent, many providers aren’t collecting and sharing data, the Navigation Center is a month past its scheduled open date with no new target date and no site, the by-name lists don’t exist, the Housing Resource Center is no closer to opening, and HSD still can’t publish meaningful performance metrics on what’s happening today. HSD and All Home are optimistic that the situation will change in the next few months, but they are still scrambling to put many of the supporting pieces in place first, and they are far away from being able to accurately measure what’s happening — and not happening.

And, of course, no one is being held accountable for the fact that this is going so poorly. HSD Director Catherine Lester continues to show up to City Council meetings and give nearly content-free reports, and Baghsaw and her colleagues on the Council let her get away with it again and again. With so many “strategic advisors” on her staff, you’d think one of them would be telling her to start showing some results for the homeless people in our city.