Wednesday morning, the City Council had its first committee hearing on the proposed police accountability legislation. It gave a good preview of some important debates we’ll get to see in the weeks to come.

Here’s my previous post on the legislation submitted to the Council by the Mayor’s Office.

Some of the key issues raised in the Council discussion:

District representation on the CPC. The CPC is intended to have 15 members: 5 appointed by the Mayor, 5 by the City Council, and 5 by the CPC itself to help it to shape its diversity, areas of expertise, and geographic representation.  But Council member Juarez, ever the champion for District 5, was concerned that with seven Council districts, there’s an obvious mismatch that might leave some Council districts under-represented (or unrepresented) while others are over-represented. She didn’t find much explicit support for enforcing representation from all seven districts (there are five police precincts, however) though it was pointed out that the legislation calls for the Council, Mayor, and CPC to consult and coordinate with each other in appointing CPC members.

Budgets. The current CPC has suggested that the budgets for the OPA, OIG and CPC should be set at a fixed percentage of the Seattle Police Department’s budget. There is a certain logic to this: one can assume that oversight work will grow and shrink with the size of the overall department. But the key underlying rationale is that fixing it at a percentage, rather than forcing each of the offices to put forth a detailed budget proposal that could be re-written by the Mayor and/or Council in the annual budget process, de-politicizes the process — an important principle for an organization that is explicitly chartered to criticize those in power. CPC members were looking for assurances that police accountability can’t be de-prioritized by a future mayor and/or City Council, though frankly no such assurances can be made: even if the budget is set as a percentage, that rule can be rewritten by the Council at any time.

There are a handful of existing precedents of departments and programs with guaranteed, formulaic budgets:

The CPC tried to make the case that the OPA/OIG/CPC functions were unique in their role of criticizing people in power, but there are actually several existing city functions with similar functions: the Municipal Court, the City Auditor, the Hearing Examiner, and the Seattle Ethics and Elections Commission. That will give the Council several data points for comparison on how budgets should best be established.  The Mayor has said that he would prefer to have the OPA, OIG and CPC submit budget requests every year, but the Council will likely have the final word. Council member Gonzalez, who chairs the committee shepherding the legislation through, is holding a companion bill with the Mayor’s budget plan for the groups until after the policy decisions are made.

Whether the CPC should hire and fire its own Executive Director. The Mayor’s proposal says that the CPC’s Executive Director is appointed by the Mayor and confirmed by the City Council. The current CPC pointed out that its members are all volunteers with day jobs, and they rely heavily on the Executive Director to get work done. Judge Robart approved two options: either the Mayor’s plan, or having the CPC hire and fire its own. There seemed to be some sympathy for the CPC’s view among the Council members; Council member Burgess pointed out that the Seattle Ethics and Election Commission hires its own staff, and that has worked out well for them.

Whether the CPC should have its own legal counsel. Giving it separate legal counsel ensures its independence and minimizes conflicts.

Ensuring CPC diversity. The aforementioned district representation issue is just one dimension of diversity, but filling just 15 positions to represent all of Seattle — particularly the groups that are often the subject of biased policing and other inappropriate police conduct —  will be difficult.

Creating a mechanism to ensure public education and community input. The CPC is intended to be the voice of the residents of Seattle in the accountability process, but it only works if there is a useful, effective, and well-understood conduit of information from the public into the CPC, and if people feel safe bringing information to the CPC. That will take community outreach to educate residents and ongoing efforts to gather community input. Doing so takes time, effort, staff and money. Council President Bruce Harrell called out in particular the need to bring youth voices into the conversation.

No doubt other issues will be raised as well throughout the legislative process (including whether sword officers will sit on the CPC, whether the CPC reviews the Inspector General’s performance, whether there should be a discipline matrix, and more broadly using preference points in hiring sworn officers), but the ones already surfaced will already lead to some robust conversations in the weeks to come. Here’s what we can expect at future GESCNA committee meetings: 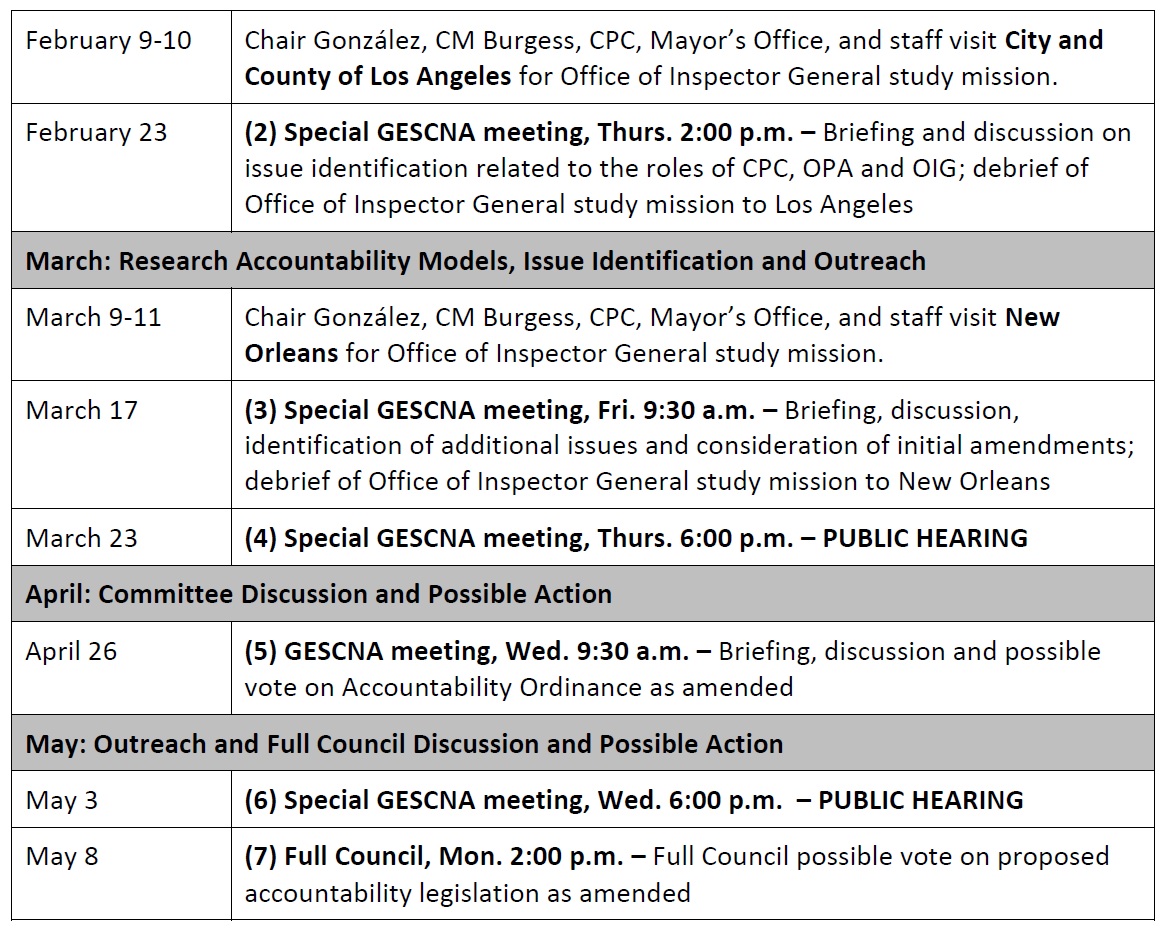 Here’s the Council memo that lays out the next few months’ work on the legislation, as well as presentations from the Mayor’s office and the current CPC on the legislation itself. You can watch Wednesday morning’s meeting here.