Last week the Council got an update from the Office of the Waterfront (OOW) on the waterfront reconstruction mega-project’s 2016 progress and the work plan for 2017. 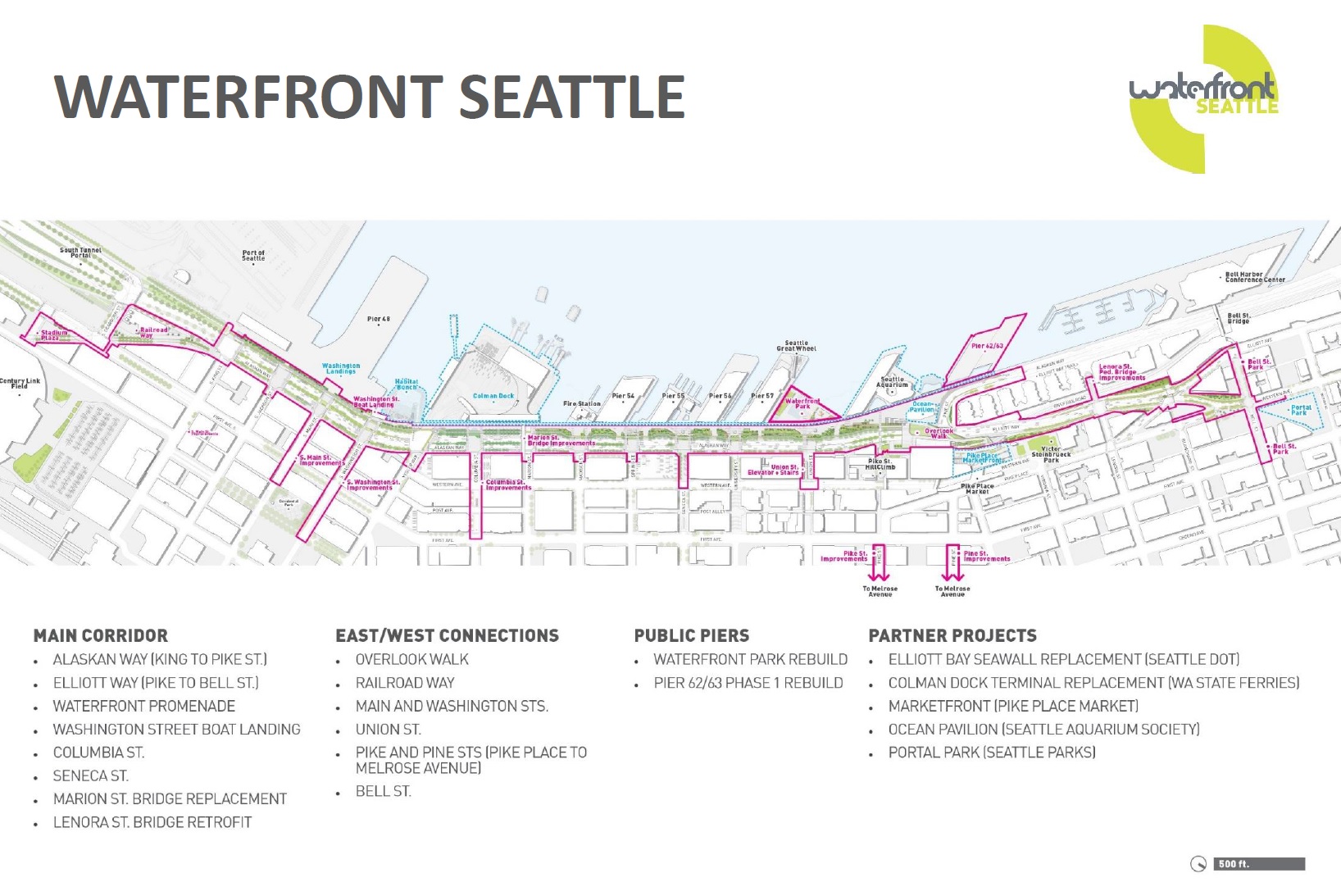 You can call it a mega project (I did), but it’s really a conglomeration of a lot of smaller projects, all on their own timeline. The OOW divides them up into four buckets:

The breakdown of Bertha, the SR99 tunnel digging machine, pushed back the completion of the tunnel and the subsequent removal of the Alaskan Way Viaduct. And since many of the pieces of the waterfront project can’t be started until the old Viaduct is gone, much of the project slipped out as well. But now that Bertha is almost done (knock on wood), the tunnel is scheduled to open in early 2019 and the viaduct demolition will commence immediately after that. That gives them a much better idea as to when waterfront construction can begin in earnest. In the meantime, the seawall replacement is nearly complete, and construction on Colman Dock begins later this year.

A lot happened in 2016. The main corridor design is now 60% complete, including moving utility service equipment and cabling as necessary to facilitate further excavation and construction work. The city also got agreement in principle with WSDOT to fund the final design and a $190 million funding commitment for street construction for everything except the Marion Street bridge (that is still under separate negotiation). They have also established a sequencing plan for the various phases of construction. The city finished the final EIS for Alaskan Way, the Promenade and the Overlook Walk.

A lot of work was also done on waterfront park and public space. Through an expanded partnership with the Friends of the Waterfront, the Pier 62/63 rebuild design was completed and the Council authorized construction funding with an $8 million contribution from the Friends. They also helped the OOW with outreach to the community and a plan for programming and maintenance of the waterfront park spaces. Through this process they discovered firsthand the benefits of having a community partner like the Friends of the Waterfront who can help to bridge between the city bureaucracy and citizens to avoid an adversarial situation when the city asks for public comment on its plans.  The Friends helped to set up community events such as concerts that became opportunities to ask attendees for input; it’s a model that worked well for them’ 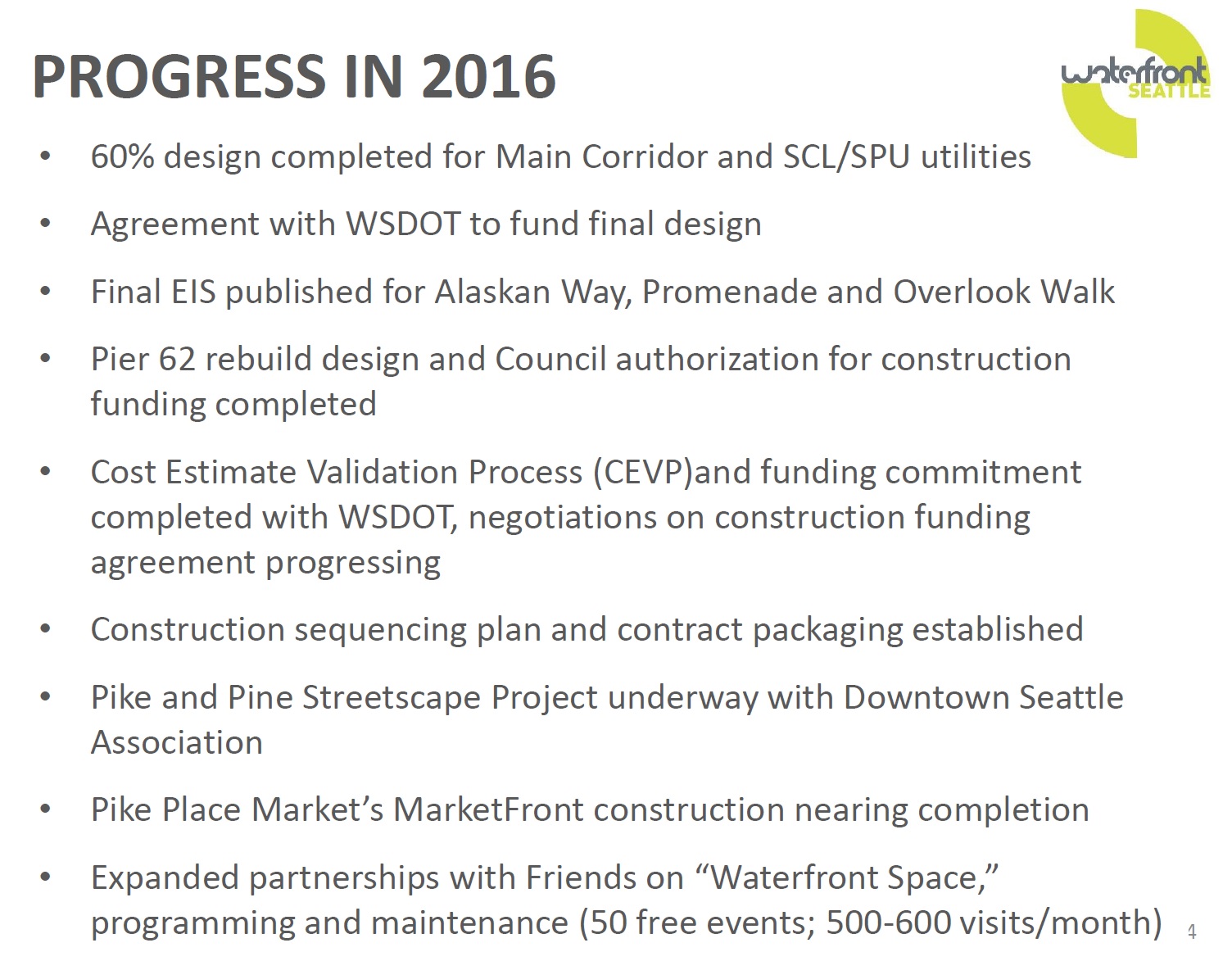 Looking forward to 2017, there is still much work to be done. The city hopes to finalize the funding terms with WSDOT by April. This year it will also be conducting outreach around the proposed Local Improvement District as a mechanism for raising $200 million for the waterfront improvement project (Friend of the Waterfront has committed to raising another $100 million as well). 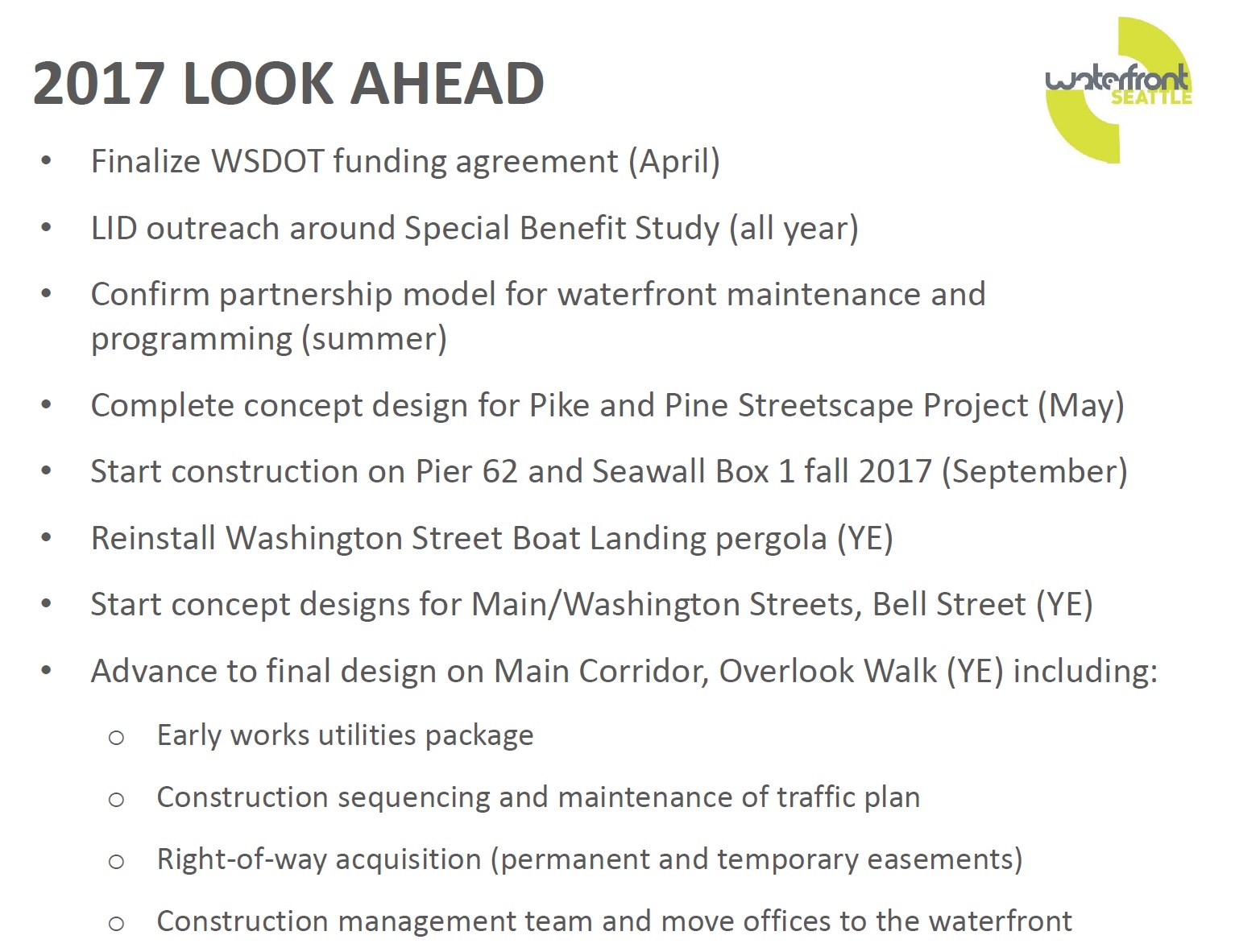 The OOW hopes to break ground on the Pier 62 reconstruction this fall, and by the end of the year they would like to have the main corridor design complete.

Beyond 2017, the OOW plans to move their offices down to the waterfront so they can be more directly engaged in the project. Some early waterfront work begins in 2018, but it really picks up steam as the viaduct removal completes. The waterfront work should wrap up in 2023.

Some issues still remain, not the least of which is the gap between the switchover to the tunnel for SR99 and the completion of the new Alaskan Way and Elliot Way open in early 2022. That leaves a couple of years (until roughly 2021) with some major traffic impacts along the waterfront surface streets. 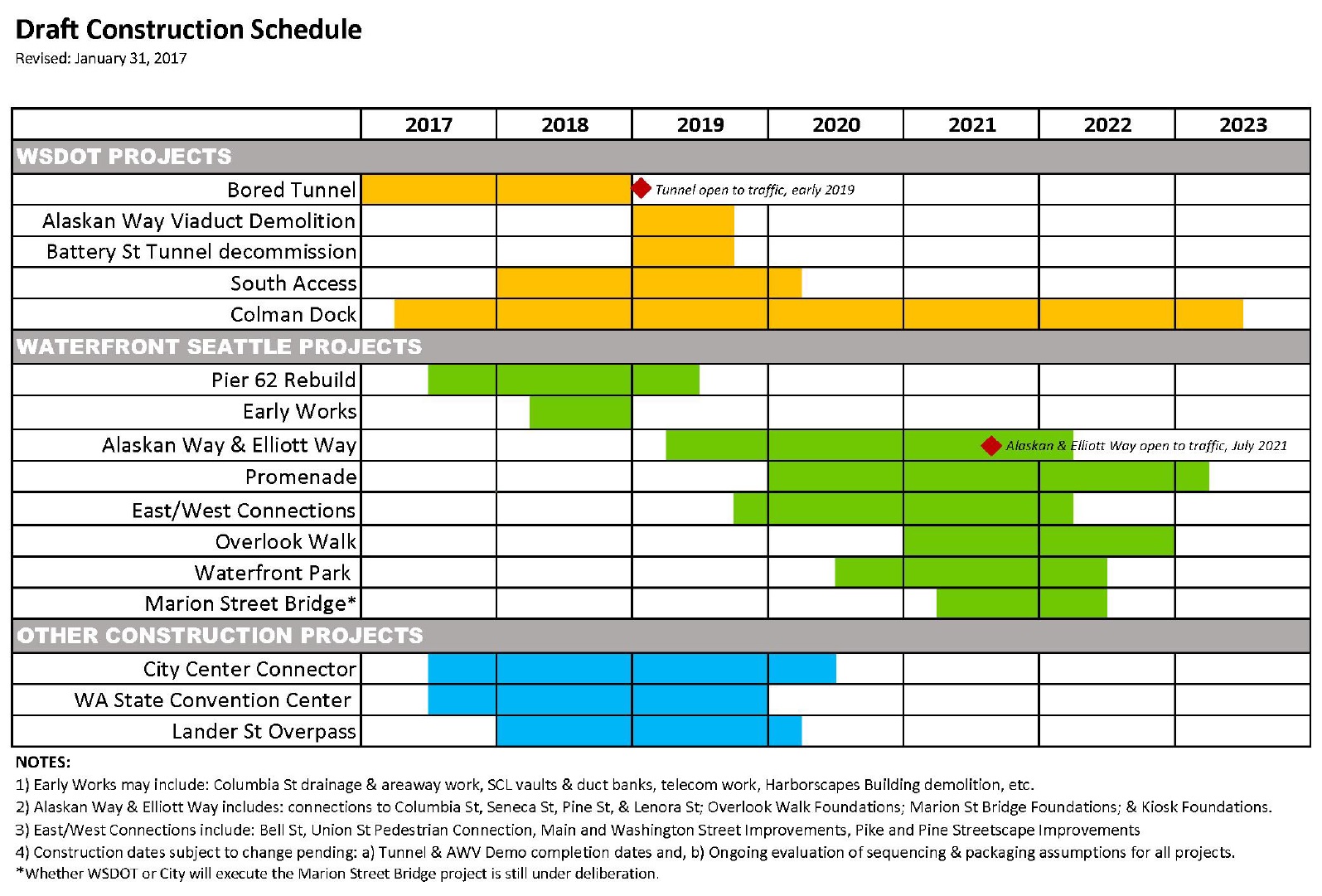 The Office of the Waterfront gave the Council fair warning of three items that will come before it over the course of 2017: