Last Thursday, Council member Lorena Gonzalez held a special meeting of her committee to continue the progress on the proposed police accountability legislation.

For background, here’s my previous post on the legislation)

Prior to the meeting, Gonzalez distributed to her Council colleagues a memo that details the schedule for the legislation over the next two months, including two rounds of issue discussions and proposed amendments. Some of the better-known issues have already been scheduled for discussion at specific meetings. 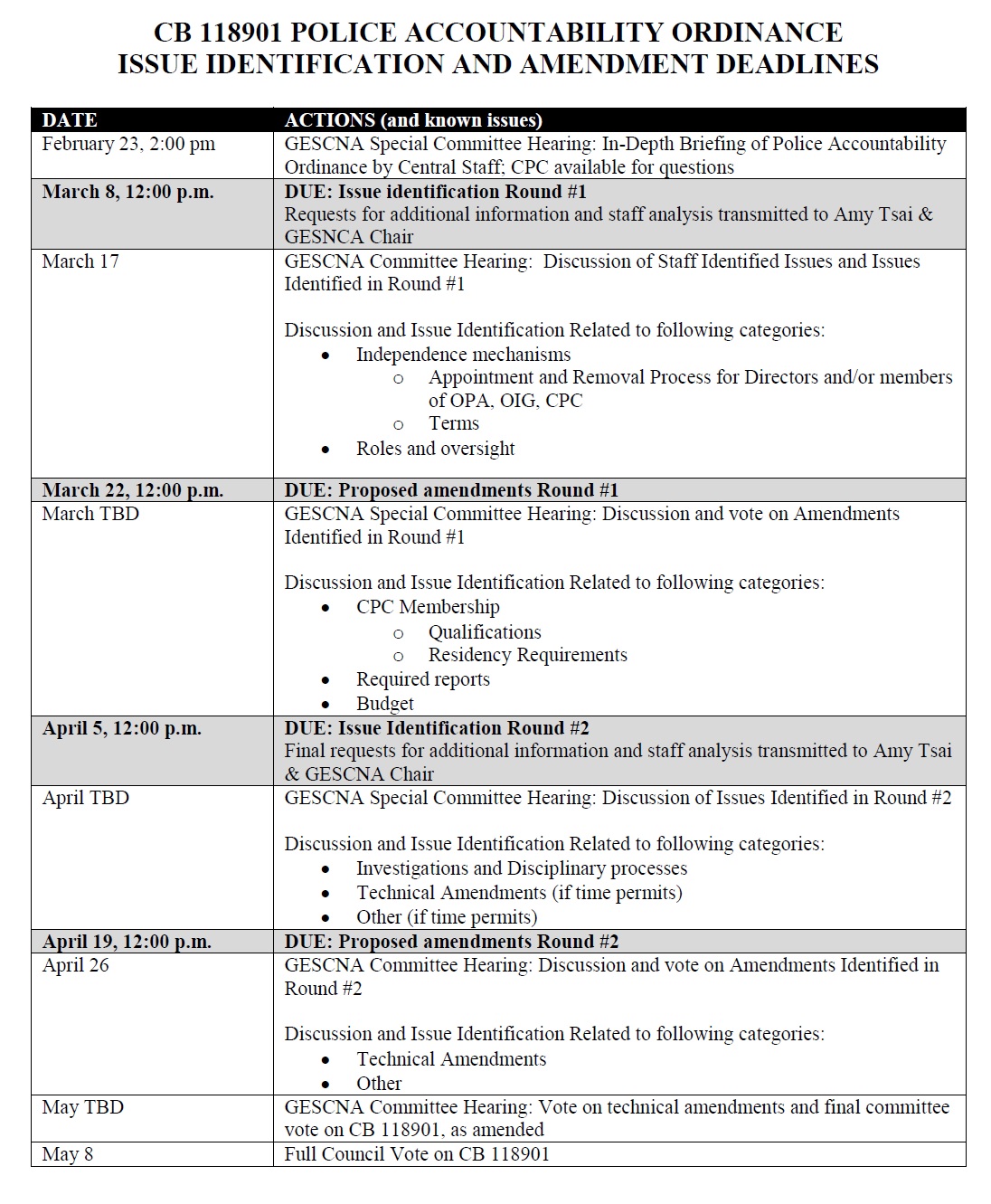 She also distributed a handy infographic that lays out the timeline for when each of the three groups (the OPA, the OIG, and the CPC) had required reports or meetings with the other groups or with other stakeholders such as the City Council.

In what was easily the most interesting part of the meeting, Council Central Staff member Amy Tsai, Gonzalez, and Council member Burgess also gave a report on their study trip to Los Angeles to learn about the police accountability system in place there. By their telling, it was largely a set of lessons in what not to do when setting up an accountability structure.

The LA system was set up in the wake of the Rodney King incident to ensure that the LAPD had civilian oversight. In their system, the center of power is the 5-person LA Board of Police Commissioners. The LAPC essentially functions as the head of the LAPD: it hires their Inspector General and has a central role in hiring and firing the Chief of Police. Commissioners are appointed by the Mayor and confirmed by the City Council (who has never rejected a candidate for LAPC), and serve for fixed terms. However, when they are sworn in they also tender a written letter of resignation to the Mayor, and by tradition when a new Mayor takes office four of the five commissioners resign and are replaced by the Mayor. So while on the surface it looks like there is independence, in practice the Commissioners serve at the pleasure (and whim) of the Mayor, and the Chief of Police and Inspector General serve at the pleasure of the LAPC.

The lack of true independence is reflected in a belief by some LA community members that their voices are not being heard by the LAPC. This is also partly because with only five members it’s difficult for the LAPC to represent the wide diversity of people in Los Angeles. But it’s also about small things, such as the fact that the LAPC and its meetings are physically housed in LAPD building space, a place that many community members don’t feel comfortable entering to meet with the LAPC.

Another problem with the LAPC is that it serves a quasi-judicial role, adjudicating cases of use of force by police officers. That means that the Mayor and City Council are looking for people who are neutral to serve on the LAPC, not people who are strong advocates for particular communities. And they heard complaints that interdependence of functions across groups has led to much finger-pointing and slowed down progress. Finally, it was noted that hiring civilian investigators has turned out to be problematic without opportunities for advancement.

After the LA discussion, Tsai walked the Council through an 18-page index (starting on page 13) of the 91-page bill, laying out all of its constituent parts, and noted some themes from the bill that are echoed in the study trips they have completed to-date:

Tsai noted that one of the main forms of checks and balances in the proposed system is forced transparency and visibility, through scheduled reports to the City Council as well as to the other oversight groups in the accountability system.

Gonzalez emphasized the importance of getting the timelines right for investigations. Currently, she said, sometimes police misconduct occurs but the officer can’t be disciplined because the collective bargaining agreement enforces a 180-day limit from the start of an investigation to notifying the officer of the result; the new legislation places the 180 day limit on just the investigation, so that delays in recommending discipline and notifying the employee won’t cause SPD to miss a deadline.

Other issues will surely be raised by Council members along the way to a final ordinance. Gonzalez has asked her colleagues to communicate their initial issues to her and Tsai by March 8th so that they have time to study them before the next committee discussion on March 17th.