This morning the proposed upzone to downtown and South Lake Union moved one big step closer to a final vote by the Council.

The Planning, Land Use and Zoning Committee considered nine amendments, adopted five, and asked Council staff to continue working on the other four. Then they voted unanimously (Council members Johnson, O’Brien and Herbold) to move the bill out of committee and on to a full Council vote on April 10.

The adopted amendments are mostly nibbling around the edges:

The items still under development include:

A common complaint on this upzone proposal in public comment sessions  — including this morning’s  — is that the required percentage of units set aside for affordable housing seems very low (2-6%). Many see this as a giveaway to big developers. Despite this issue coming up frequently, the Council and the city staff have done a poor job of explaining why the number is so low, for example compared to the University District rezone.

State law says that the city can’t simply require a developer to set aside (or pay for) affordable housing; something of approximately equal value must be given to them in return. That’s where the upzone comes in: developers get additional building capacity (height, floor area, or both) in return for the affordable housing set-asides or the payment in lieu of that. Here’s the map of the U District upzone: you’ll notice that development capacity goes up significantly, in some cases more than triple what it was before. (note: this is the near-final map; some things got adjusted a bit at the end) 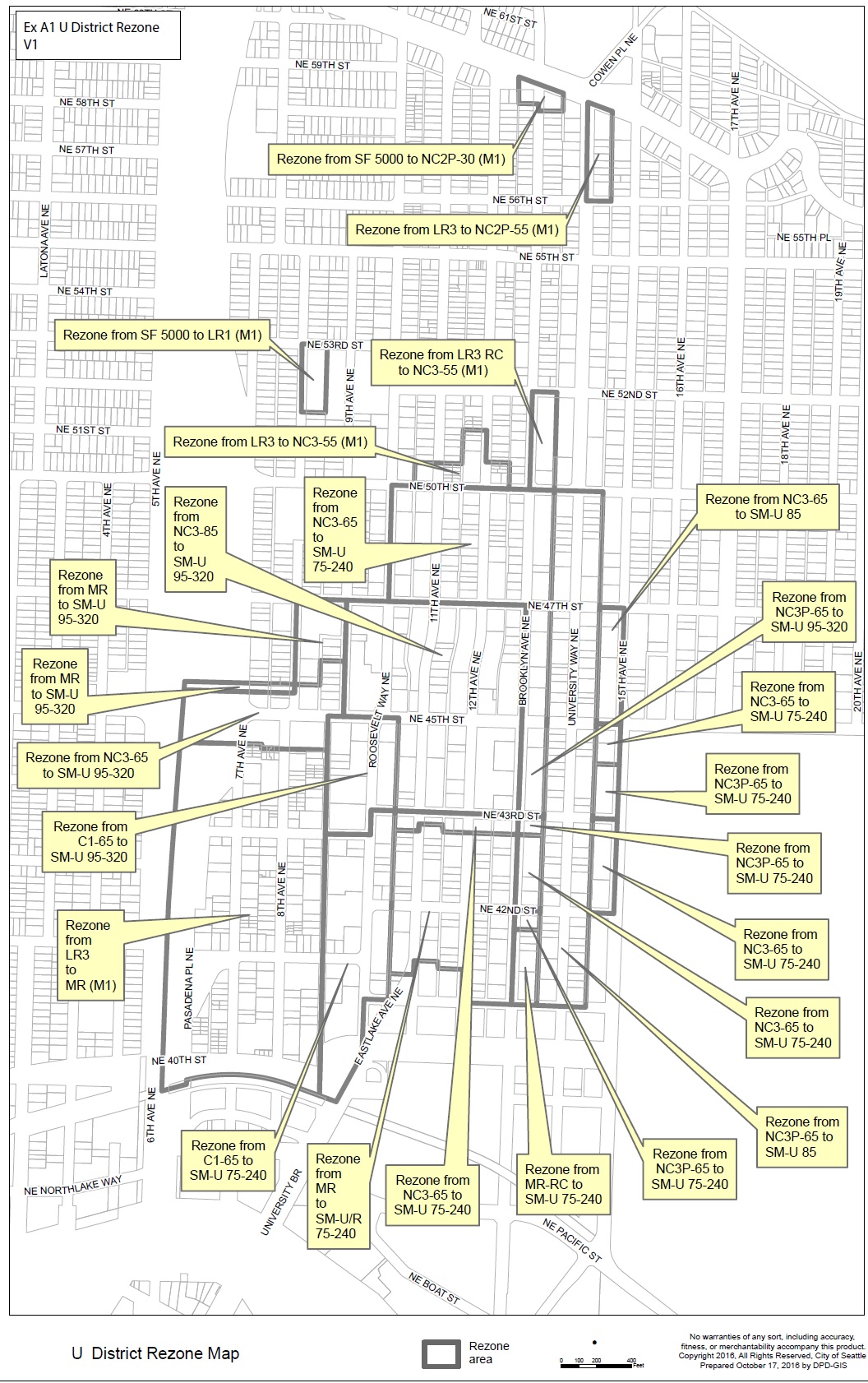 Compare that with the Downtown/SLU proposal map. 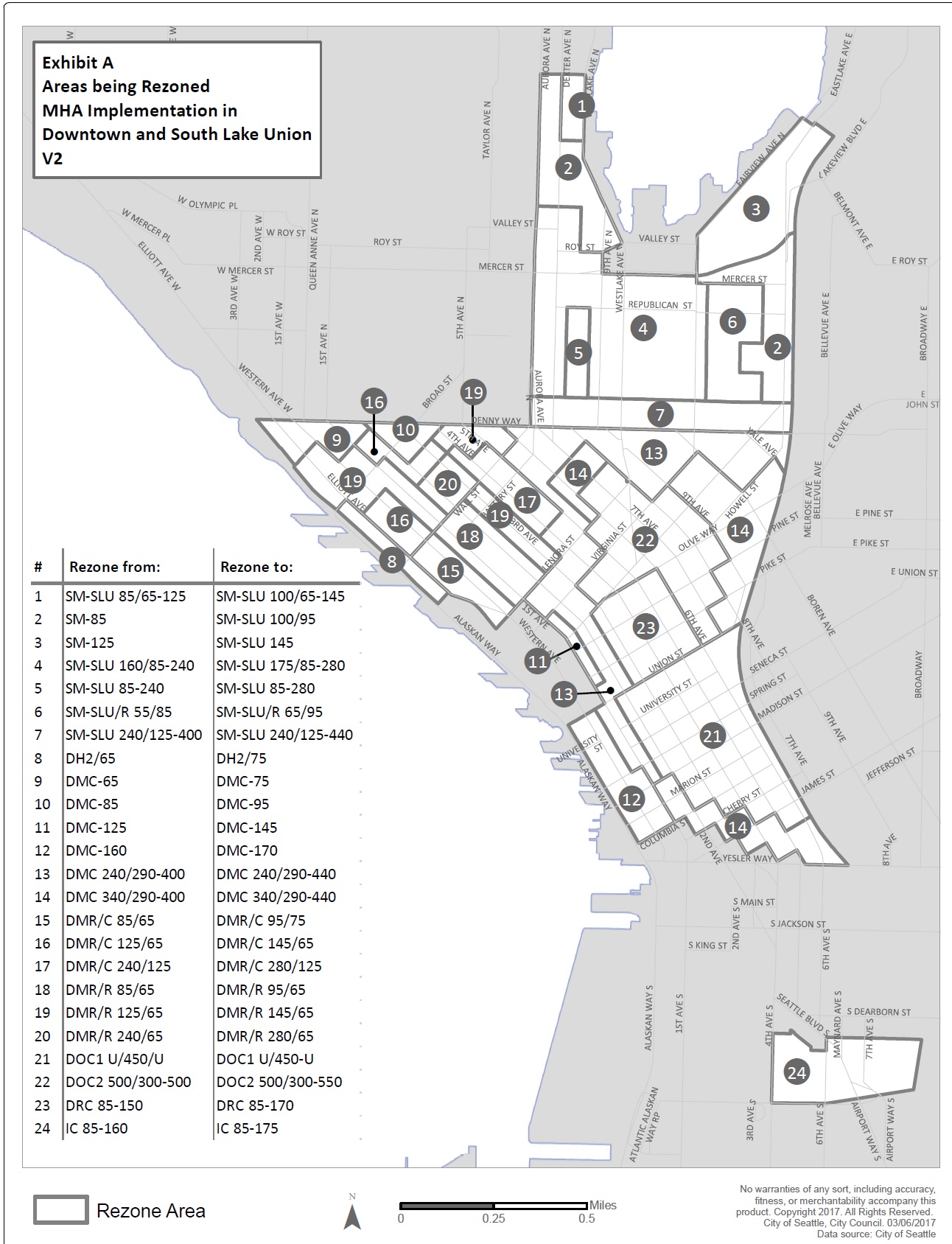 The vast majority of increases are in the range of 10-15%, because the old zoning already allowed for significant development capacity. The city is limited in the amount of additional capacity it can grant, because there was already so much before. But the MHA requirement is defined in terms of a percentage of the units in the entire building, not just the additional part granted by the upzone, and in a large building even a small percentage can be a lot of units. So the low MHA percentage comes from a combination of the upzone granting a relatively small increase, and the buildings themselves being so large. On top of that, highrise construction is more expensive, so the cost of realizing that additional capacity is higher for developers — even if it doesn’t necessarily translate into higher prices for the units built.

It’s interesting that this upzone is going much faster than the U District. That’s partly because it’s less contentious. But it’s also because of an intentional effort by Council member Rob Johnson, chair of the PLUZ committee, to rush it. That invites comparisons to Council member Kshama Sawant’s rush to get her move-in fee legislation passed last fall. In both cases there were a number of outstanding issues at the time the bill was voted out of committee, with a hope that the remaining issues could be worked out and amendments adopted in full Council before the final vote.

Unlike Sawant’s bill, however, the open issues were all discussed in committee this morning and the Council members present (Johnson, Herbold and O’Brien) all came to consensus on what the amendments should do, leaving them mostly to wordsmithing. So the final version of the amendments won’t get a thorough discussion in committee, as they ideally should, but the Council members would argue that they shouldn’t need it. The open issues for Sawant’s bill didn’t have nearly that level of agreement, and needed further discussion in committee (which they eventually got when the Council referred the bill back to committee to finish the job).

Johnson’s rationale for rushing the legislative process is that there are currently 40 to 50 active development projects that have already been permitted that he would like to see opt into the MHA program to potentially generate tens of millions of dollars in affordable housing. The sooner the MHA upzone is in place, the better the chance that some of those projects will opt in. Johnson also noted this morning that he hears from the development community a belief that the current building boom is nearing its end, adding to the urgency to draw as many of the existing projects into the MHA program as possible.

Ironically, Johnson ended the discussion by thanking his colleagues for indulging in full discussions of each of the proposed amendments in an open meeting where the public can witness the conversation. While they certainly had a discussion of each, four of the amendments will now see their first public discussion on their written form only a few minutes before the final vote on the bill. What Johnson did was better than nothing (and better than Sawant), but it’s not ideal. It points to how messy the legislative process is in practice, and the tradeoffs that legislators are forced to make to balance competing interests.

The amendments adopted today require updating the official title of the bill; that means it must be re-introduced in next week’s Introduction and Referral Calendar, delaying the final vote. Johnson said this morning that he expects the full Council to vote on it on April 10th.