This afternoon the City Council voted unanimously to rezone the downtown and South Lake Union areas of the city, granting additional zoning capacity in exchange for affordable housing. Most of the discussion was around one controversial amendment.

For background, here’s my preview email from last night.

Three of the four eleventh-hour amendments passed into law; the exception was Council member Herbold’s attempt to increase the affordable housing performance and payment requirements to a flat 5% of units for performance or $14.75 per square foot for the payment-in-lieu alternative. The original bill sets performance at 2.1% – 5.1% depending on the zoning change, or $5.50 to $13.00 payment.

There was a long public-comment session today, with many residents speaking about the bill — and many arguing passionately either for or against Herbold’s amendment. Many of those arguing for it said that 2.1% was simply too low and a “giveaway” to rich developers. Unfortunately, many seemed to be of the belief that the MHA performance requirement was predominantly set at 2% across the regions of the city being rezoned. Let’s look at that.

There are 24 zoning categories being rezoned. The performance and payment requirements are customized for each one, based upon how much the development capacity is increasing compared to what it used to be, with a few getting additional tweaking for policy reasons. 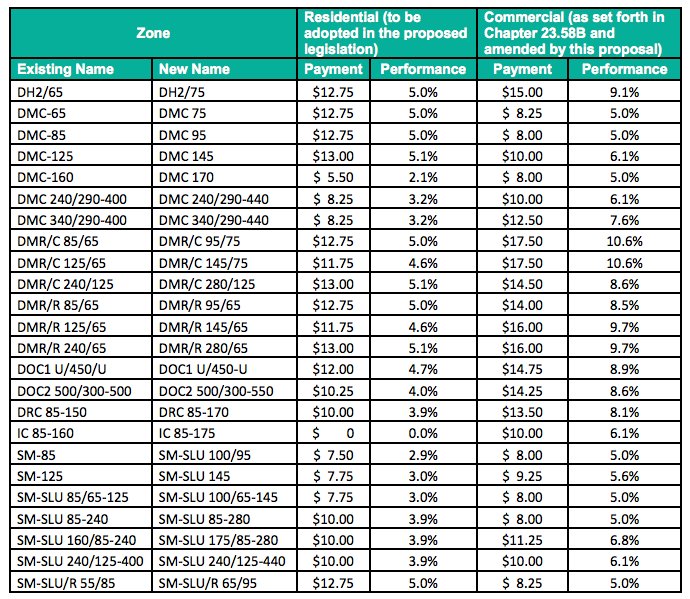 This table, however, doesn’t give you a good idea as to how much area each zone covers. Here’s the city’s zoning map, which I color-coded based on the residential MHA performance requirement (click to expand). The three red areas are the only ones with performance requirements under 3%. Orange is 3.0 – 3.9, yellow is 4.0 – 4.9, and green is 5.0 and over. 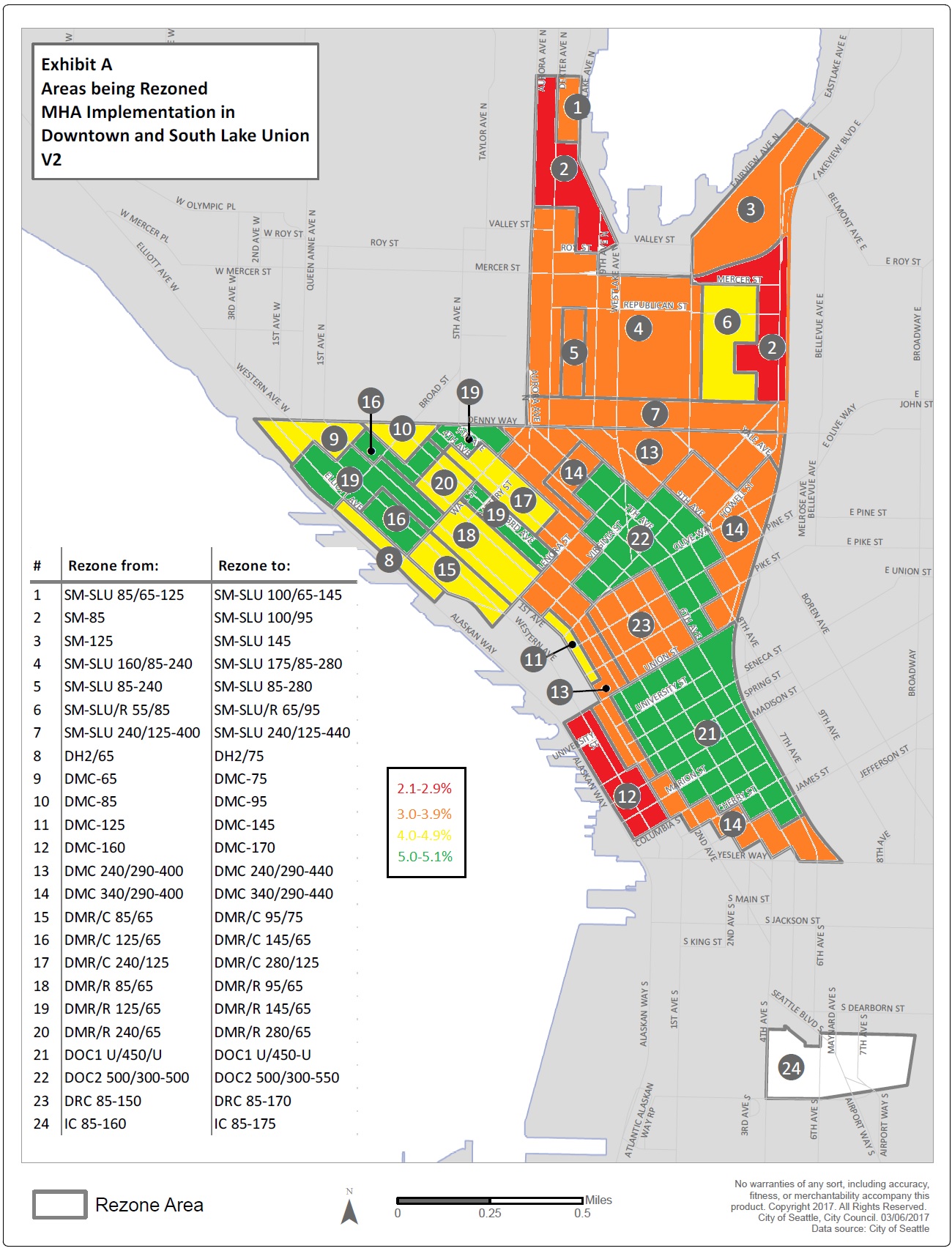 Things we learn from this map:

As Councilmember Johnson explained, there are three reasons for SLU and residential parts of downtown to be in the lower range:

Herbold’s supporters also argued that other cities such as New York and San Francisco have set requirements much higher than Seattle. Johnson countered that neither city has created a program as broad as Seattle’s MHA, which will eventually cover the entire city and all residential and commercial development. He also pointed out that San Francisco’s 25% requirement in some areas of the city has, by most measures, created a strong disincentive to development there.

In the end, most Council members agreed with Johnson. Herbold’s amendment failed by a 2-7 vote, with Council member Sawant the only one joining Herbold in voting “yes.” Before the vote, Sawant accused Johnson of “voodoo economics” in suggesting that there might be negative consequences to raising the performance and payment levels. Ironically, she made these comments just after Johnson praised Herbold for her thoughtful analysis and for conducting a policy debate free of personal attacks.

After that was sorted out, the amended bill passed 9-0.

As an aside, some of the opponents of the MHA upzone argued that the city would take the MHA payments from downtown and SLU and use them to create affordable housing in other, cheaper parts of the city. Herbold circulated a map, created by city staff, showing where affordable housing has been already created using funds generated by the existing Incentive Zoning program. It clearly shows affordable housing created all over the city, including Belltown and downtown — though not so much in South Lake Union.

Now that downtown and South Lake Union are done, Chinatown and the International District are next up.

Here’s Johnson’s statement on the passing of today’s bill.