This morning the City Council had its first discussion of the two proposals submitted last week for redevelopment of Key Arena. That was fairly straightforward. The bigger issue for them was how little involvement they would have in the decision-making process until the very end.

Executive branch staff representing the Office of Economic Development, Seattle Center, and the City Budget Office walked through for the Council the two proposals received and the process and timeline for evaluating them and arriving at a decision.

They outlined seven objectives for the RFP, which will also serve as the (unweighted) criteria by which the proposals are evaluated:

A. Provide a world-class civic arena  to attract and present music, entertainment, and sports events, potentially including NBA and NHL events, to Seattle and the region.

B. Provide for Project design and Arena operations in a manner that integrates with and enhances connections to Uptown and adjoining neighborhoods and aligns with the Urban Design Framework.

C. Provide for design, permitting, development, demolition (if applicable), and construction of the Arena with minimal City financial participation.

D. Provide for the continuous, successful, sustainable operation of the Arena as a world-class civic venue with minimal City financial participation.

E. Provide for mitigation of transportation impacts due to Project construction and Arena operations.

F. Provide Project construction and Arena operations in a manner that is equitable for workers and consistent with the City’s Race and Social Justice Initiative.

G. Provide for Project design and Arena operational integration with Seattle Center, contributing positively to the vibrancy of Seattle Center.

They also prepared a side-by-side comparison of the basic information as presented in the executive overviews of the AEG and OVG proposals: 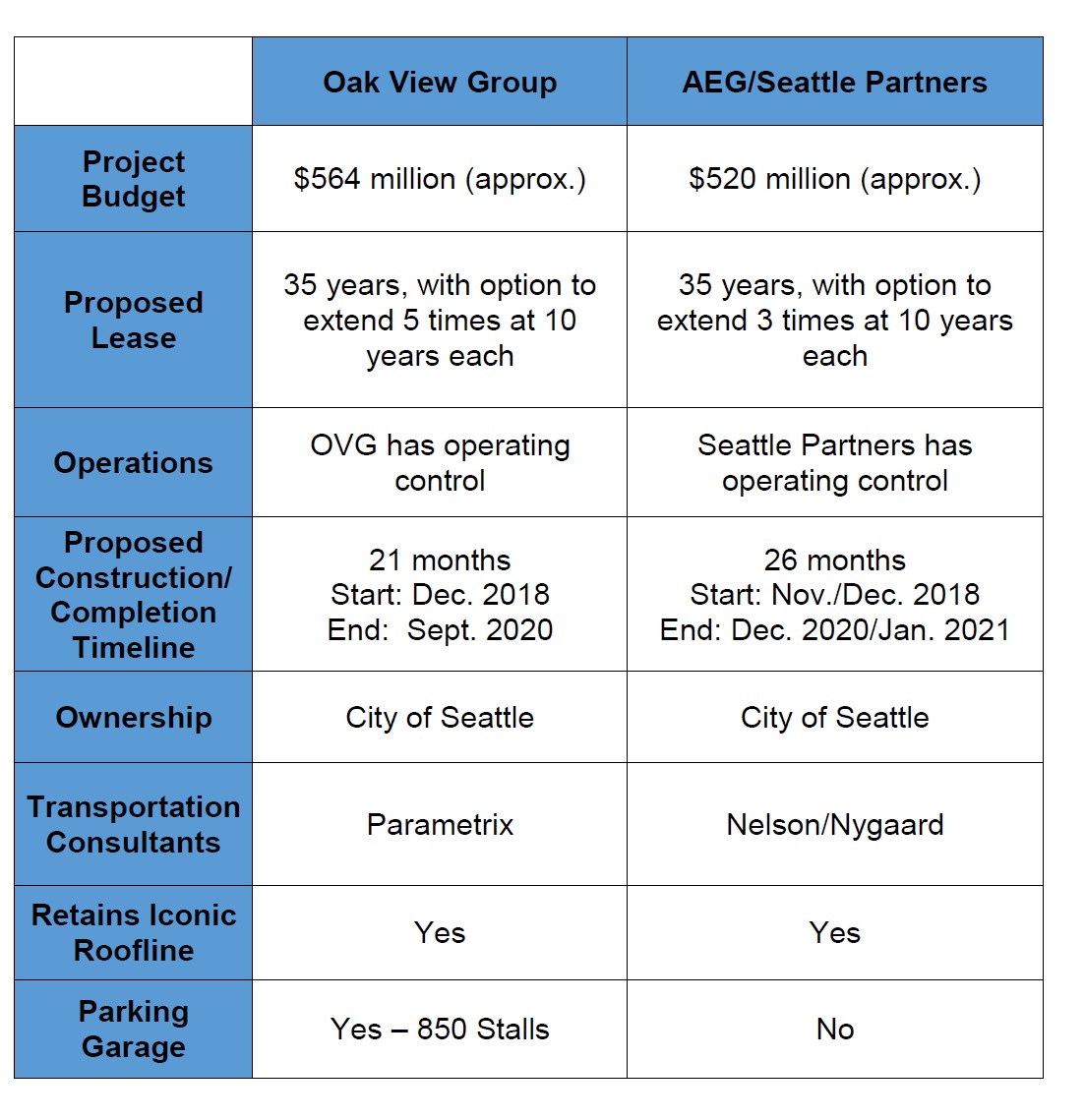 Brian Surratt of the Office of Economic Development (who is leading the Key Arena RFP process) said that they represent “two serious proposals.”

The one additional point of comparison was of the financing structure for the two agreements: OVG’s proposal asserts that it will be entirely privately financed, while AEG’s asks for a provision similar to what was in the original SODO Arena MOU: the city would issue bonds that AEG would repay directly. Both proposals made vague references to their desire to have the city reinvest any additional revenues beyond what it is currently deriving from Key Arena (potentially admissions tax, parking revenues, B&O tax and leasehold excise tax) back into the facility for ongoing improvements. City Budget Director Ben Noble thought that wasn’t unreasonable, given that it’s understood you don’t build an arena once; you are continually building and rebuilding it to keep it state-of-the-art.

The full proposals have not been made public, nor have they been shared with the City Council. City staff said that they intend to do that after April 26th when the city has its first meeting with the Community Advisory Panel and the two companies have a chance to deliver their pitches.

The staff summarized the process and timeline for moving forward: 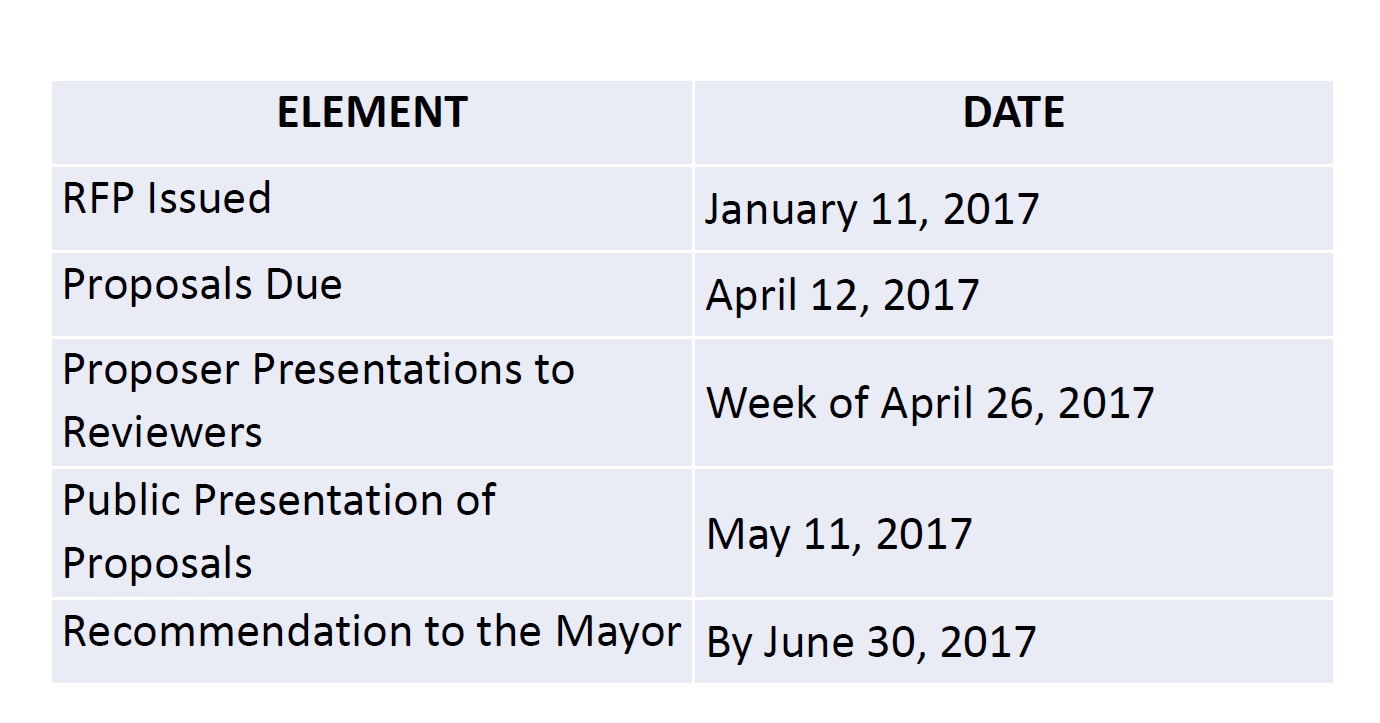 The Community Advisory Panel is scheduled to meet four times in the coming months. The first meeting is on April 26th, when they will hear the proposals; that meeting is not open to the public. The executive team will also be meeting and deliberating, using the input it receives from the advisory panel. Six different city staff teams will evaluate the proposals from different perspectives:

They expect to deliver a recommendation to the Mayor by June 30th. Before it is brought to the Council, they will negotiate an MOU with the winning proposer (if there is one; they reserve the right to reject all proposals).

Council President Harrell, cognizant of the need to “bring the public along,” pushed on how much of the process would be open for public scrutiny, including the executive team’s deliberations and paperwork. The tentative answer was that executive branch meetings and documents would be private until after the process concluded. Staff did note that a public open house with the two proposers is scheduled for May 11.

But many of the Council members objected to being left out of the process themselves until the very end when they are asked to ratify a proposal and MOU. Council member Burgess recalled the history of the SODO Arena MOU, which was negotiated by the executive branch then re-negotiated by the City Council when they found it unacceptable. Burgess (and other Council members) want to avoid a repeat of that by being involved much earlier in the process. The Mayor’s staff seemed less excited about the idea of having the Council deeply involved at every step.

City staff presented a “pyramid” view of the decision-making process that irked the Council members by leaving them out: 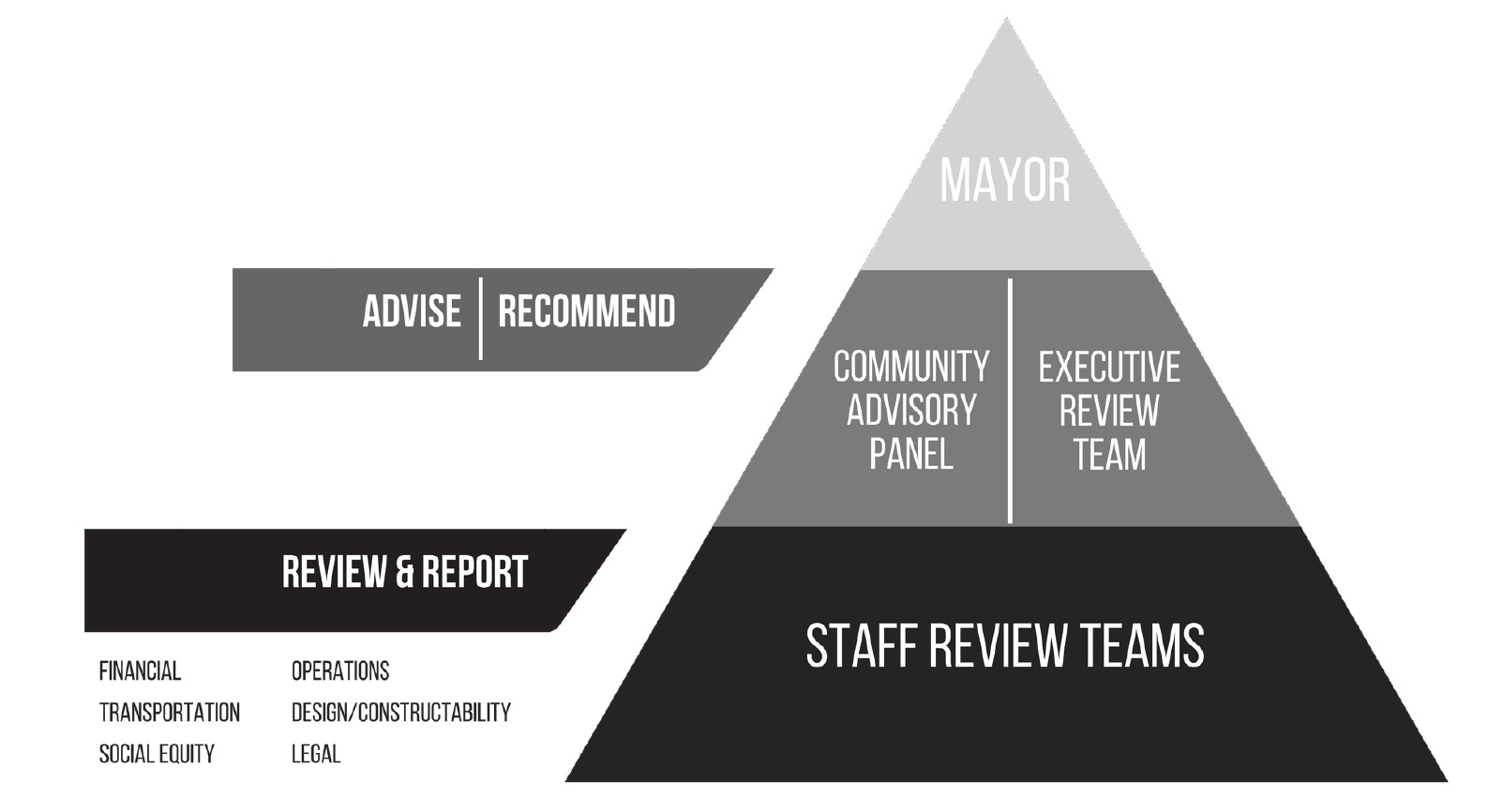 They assured Council members that they would have a role as part of the “executive review team,” and would receive regular updates and (informal) opportunities to provide input, but the Council members seemed unsatisfied with that response. Juarez insisted that at a minimum Council Central Staff member Dan Eder be allowed to attend all Community Advisory Panel meetings and the executive review team meetings (after a long pause, Surratt agreed). But several Council members pushed for a more collaborative approach to deliberation and decision-making.

There were a few mentions of the elephant standing in the middle of the room: the revised SODO Arena proposal, with its alley vacation request working its way through the approval process and eventually arriving in front of the Council as well. Every time it did come up, the discomfort around the table was palpable. Despite assertions that the SODO Arena and Key Arena proposals are on independent, parallel tracks, it’s clear that they won’t remain so for much longer. It makes no sense for two new arenas to be built in Seattle, so there is a race to the finish line for obtaining the necessary city approvals.  Johnson pointed out that the SODO Arena proposal is far ahead of Key Arena proposals in the process: it has approved designs and a final Environmental Impact Statement, while any approved Key Arena proposal would still need to run those gauntlets and survive legal challenges.

The request for public financing could be a deal-breaker for the AEG proposal. But on the other hand, the OVG proposal  seems nearly bulletproof: it doesn’t require any public funding or financing, it preserves enough of the iconic aspects of the building to withstand a “historic site” designation, and there aren’t contingencies on acquiring an NHL or NBA team beforehand. The biggest outstanding issue with the OVG bid is traffic management, an issue that the SODO Arena proposal also shares.

At a high level, the OVG and SODO Arena proposals are roughly on par with each other: other than traffic, their issues appear minor, low-risk and resolvable. If either proposal gets City Council approval first (an MOU for OVG, and an alley vacation for SODO Arena), the other one might decide to just give up. So the race is on, and that means that the Mayor’s staff and the City Council will feel pressure to expedite both approval processes. In fact, delays in either process could be fodder for a lawsuit if it causes the other proposal to be approved first. And given that it’s not in the city’s interest to approve both the SODO Arena and a Key Arena renovation, don’t be surprised if circumstances “magically” align so that they both end up in front of the Council for approval on the same day. As painful as that would be, it’s easy to argue that it’s far better for officials to make a decision on the merits as to which arena proposal is in the better interests of the city rather than letting the timing of the city’s byzantine approval processes be the deciding factor.

This could get very political in the coming months. Did I mention it’s an election year, and the mayor’s race just got very competitive?

With the Key Arena proposals in hand, and knowing the schedule for a decision by the Mayor, the big unknown at the moment is how long it will take the SODO Arena alley vacation to work its way through the system and arrive on the Council’s doorstep. As it currently stands, the Council’s Select Committee on Civic Arenas won’t meet again until July 10, when they will hear the Mayor’s decision on the Key Arena proposals. But a quick turnaround on the SODO Arena alley vacation could change that — and throw a wrench in the works.