This morning the City Council got a briefing from the City Budget Office on the national and regional economic outlook, and what it means for the city budget.  As predicted last year, things are beginning to cool off.

The predictions haven’t changed much since their last update in October. U.S. GDP is growing at an annual rate of around 2%, and Seattle is outpacing that. This is the eighth year of economic recovery, making it the third-longest in the post-WWII era, but also the slowest recovery. 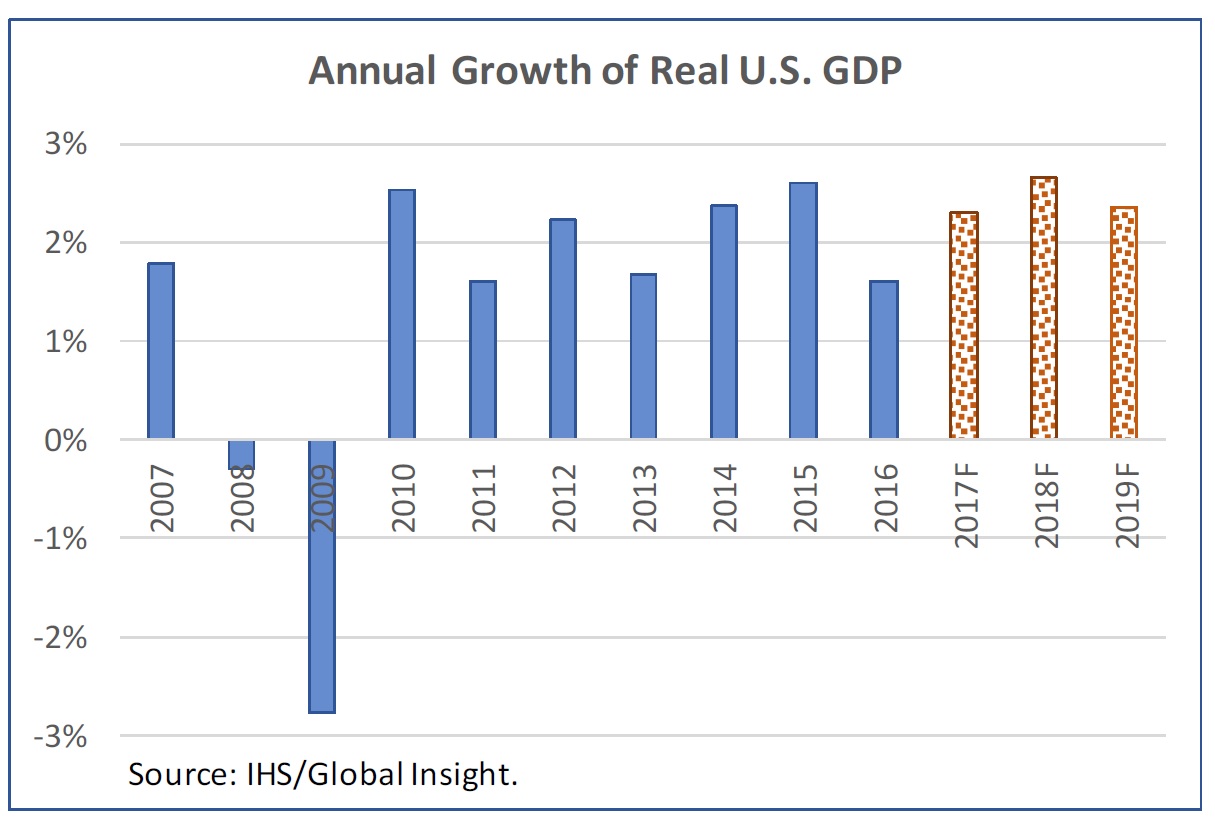 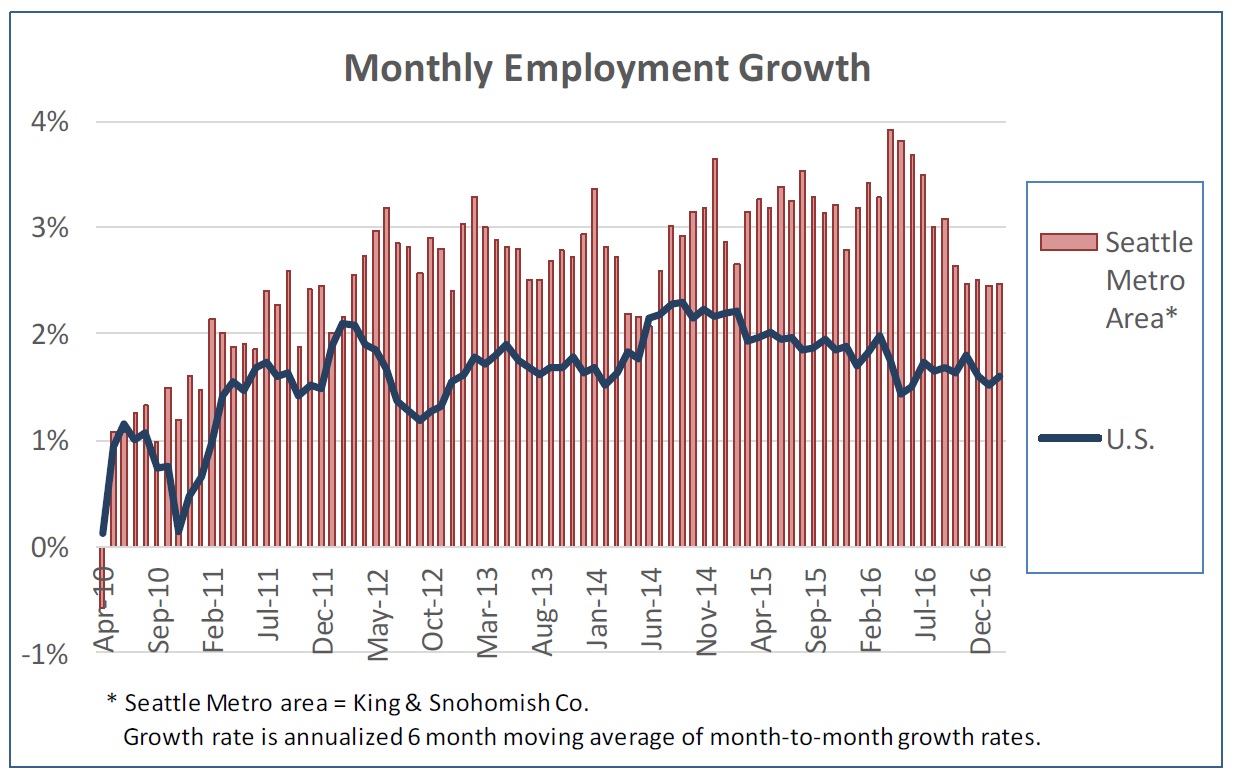 But there are three sectors driving that: aerospace, “nonstore retail,” and software. Aerospace is, of course, Boeing, which has been slowly downsizing. Amazon, on the other hand, is almost singlehandedly the “nonstore retail” sector here, and is the key driver for Seattle employment growth.  The software sector is growing as well, but it turns out that it’s being driven by a collection of startups and smaller companies, not by Microsoft. The slide below, which shows net change in employment since the start of the post-recession recovery, show the extent to which Amazon is driving local growth. 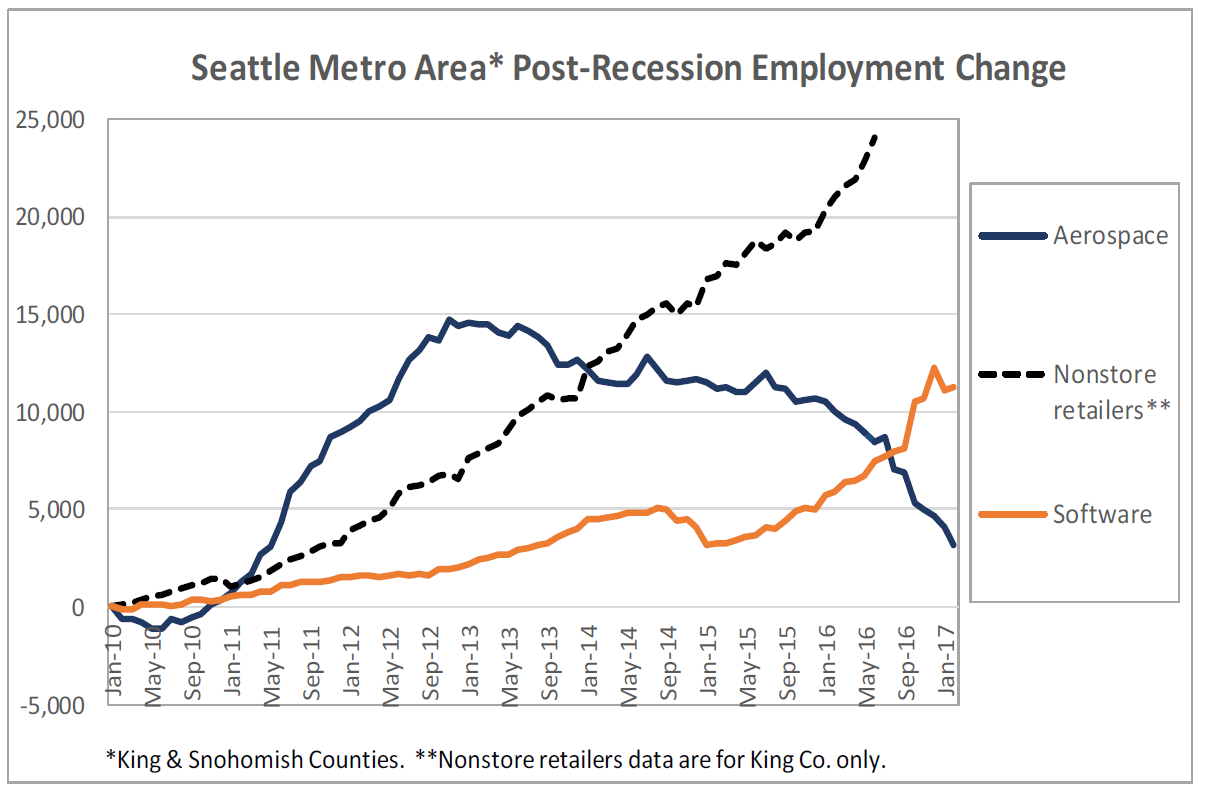 Growth is expected to cool even further in the coming years. 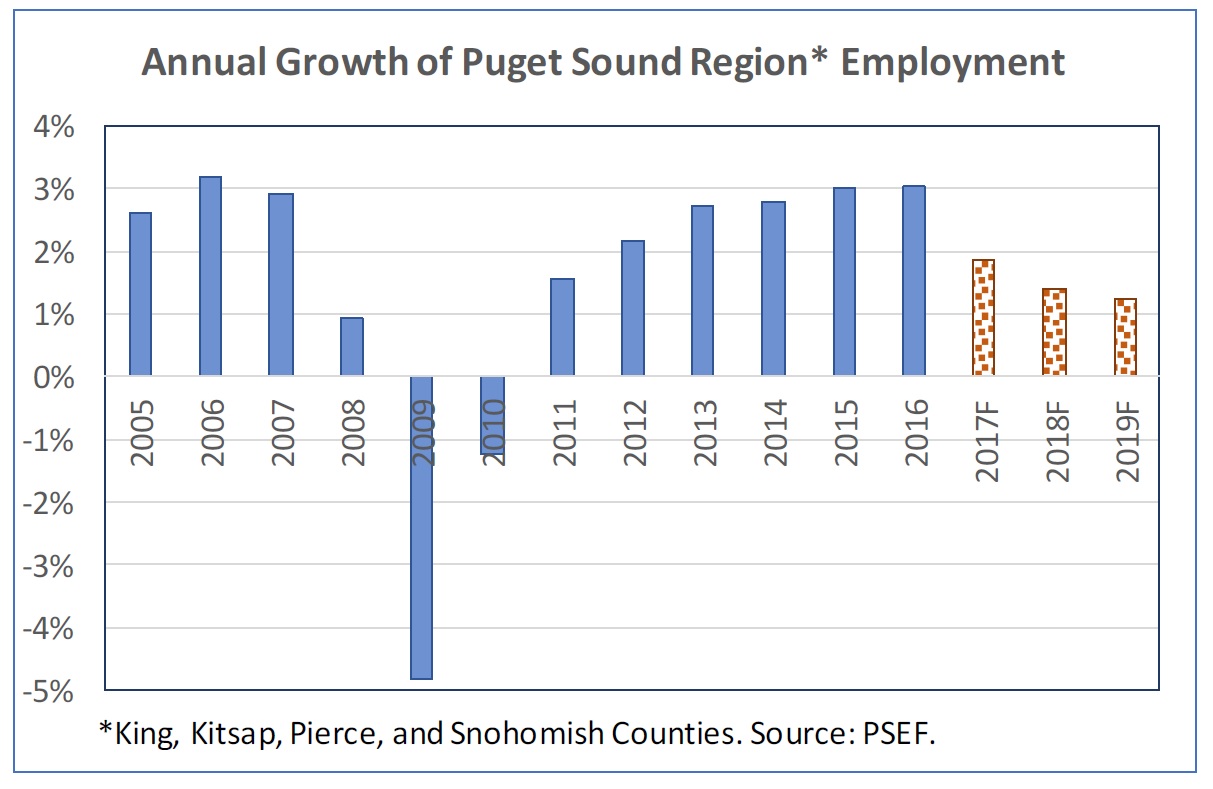 The other strength in the local economy has been, of course, construction.  There has been a massive surge in construction during the post-recession recovery. We can see that clearly in the construction permits issued and in the total taxable retail sales for construction, which according to city officials tends to lag the permits by about a year (i.e. the length of a construction project). 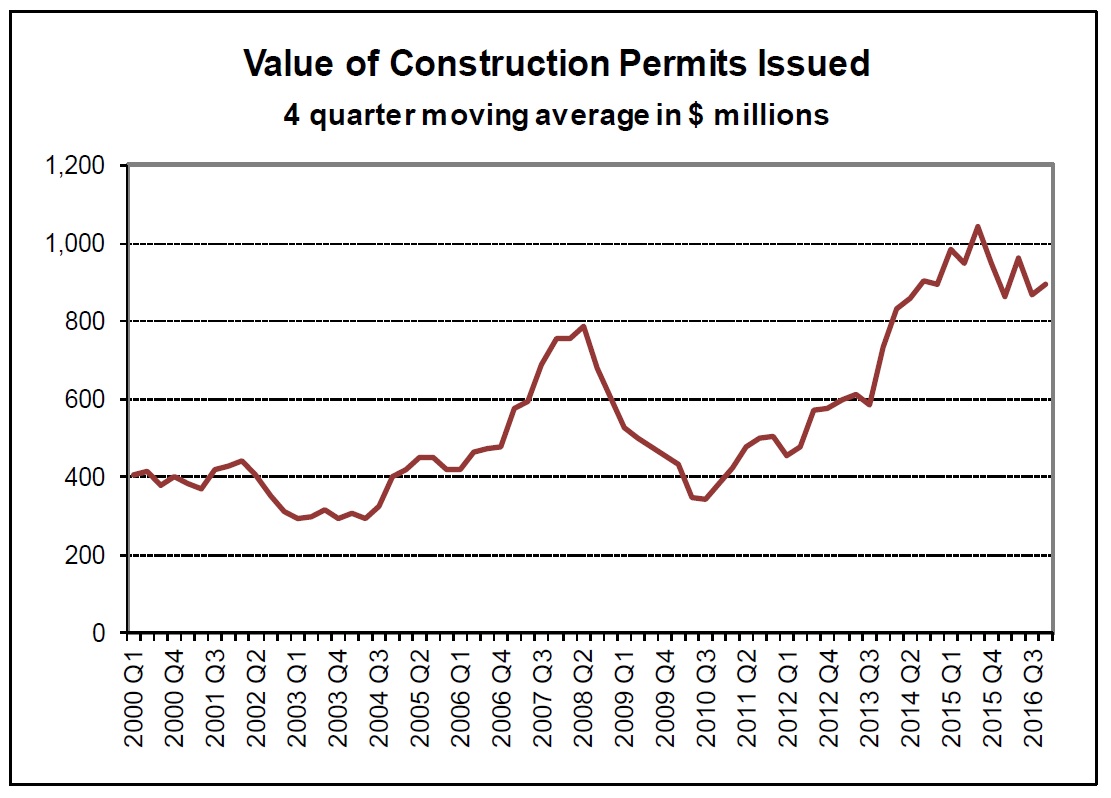 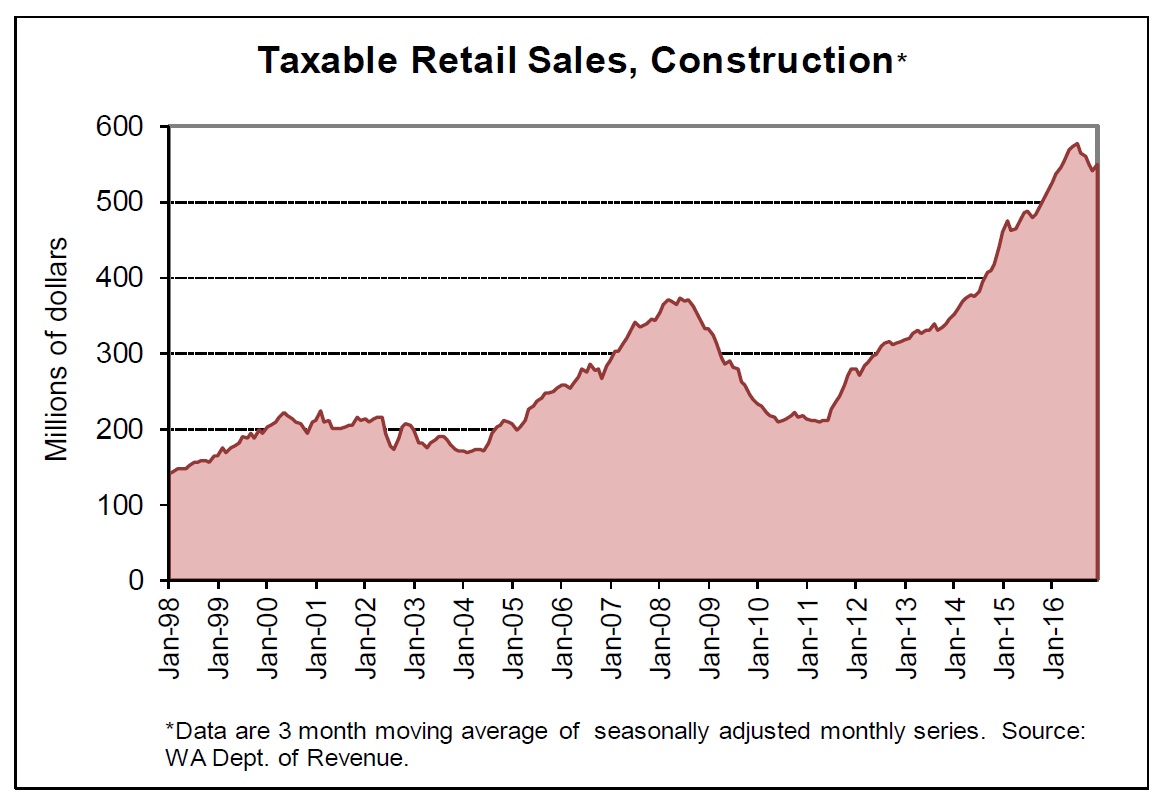 As you can see from the graphs, though, Seattle seems to have passed the peak of its construction boom. This is one of the reasons Council member Rob Johnson is pushing so hard to make the MHA rezone terms attractive enough to pending projects that they will want to opt in: if we miss the peak, then the effect of the MHA program will be substantially smaller.

What does all this mean for city revenues?  Given the long lead time on construction,  construction-based revenues (property tax, construction retail sales tax, and Real Estate Excise Tax) will continue to be strong for the next few years. 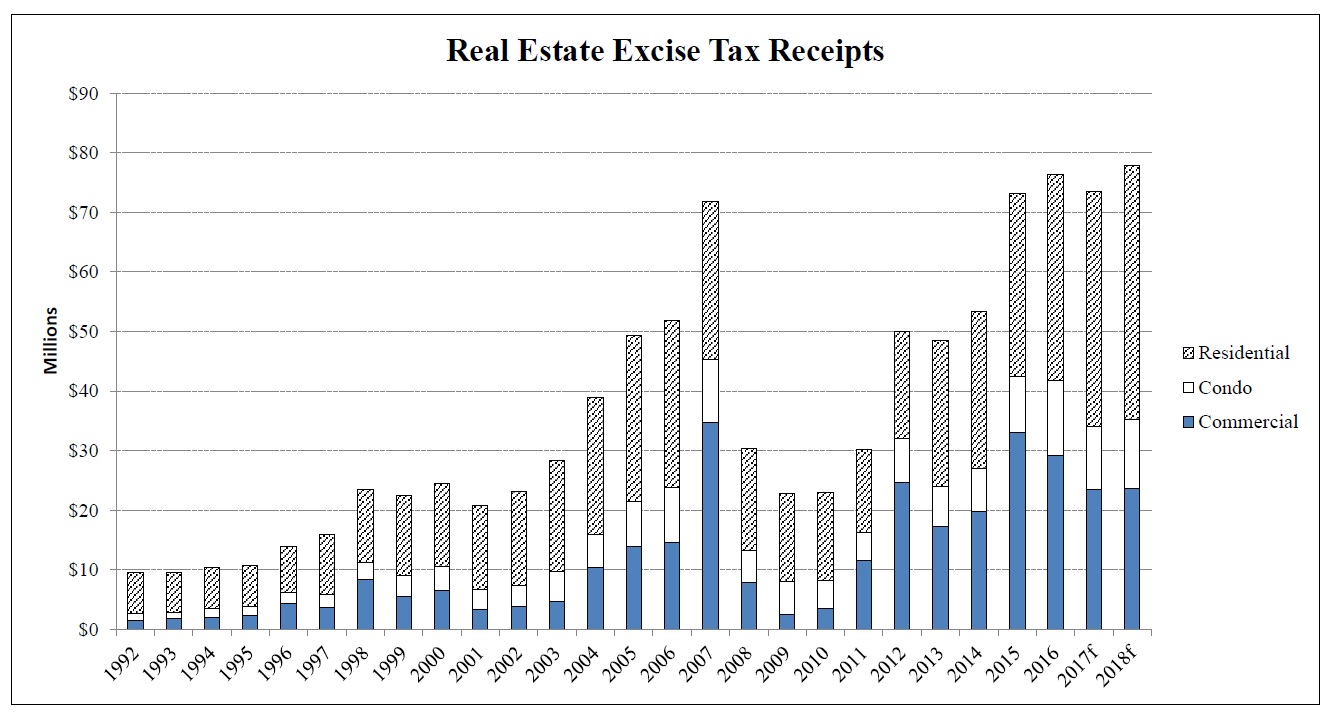 But sales and B&O tax growth will likely soften. 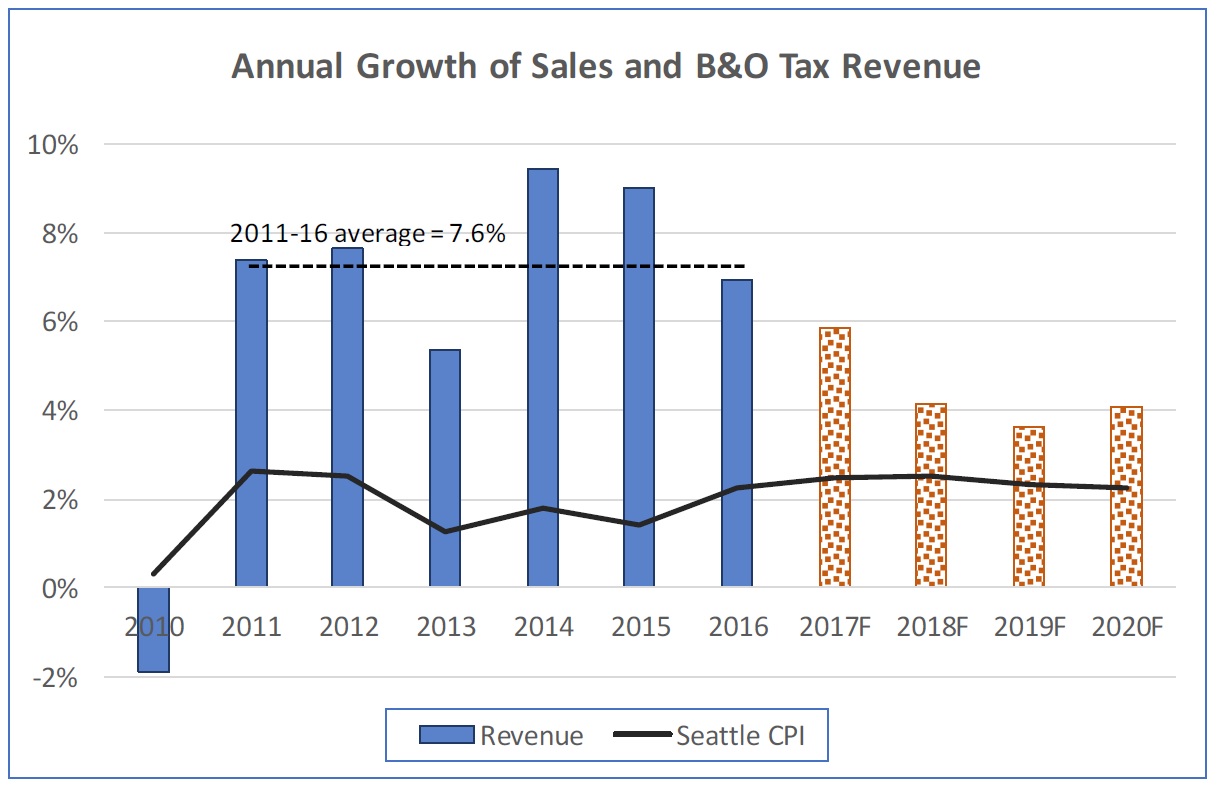 Based on these projections, the Budget Office updated its 2017 and 2018 revenue numbers:

Many of the revenue categories are up from the last estimate, particularly the ones related to property and construction. There are a few goofy things in here too:

While the extra revenues are a good thing, there are extra expenses in the budget update as well. 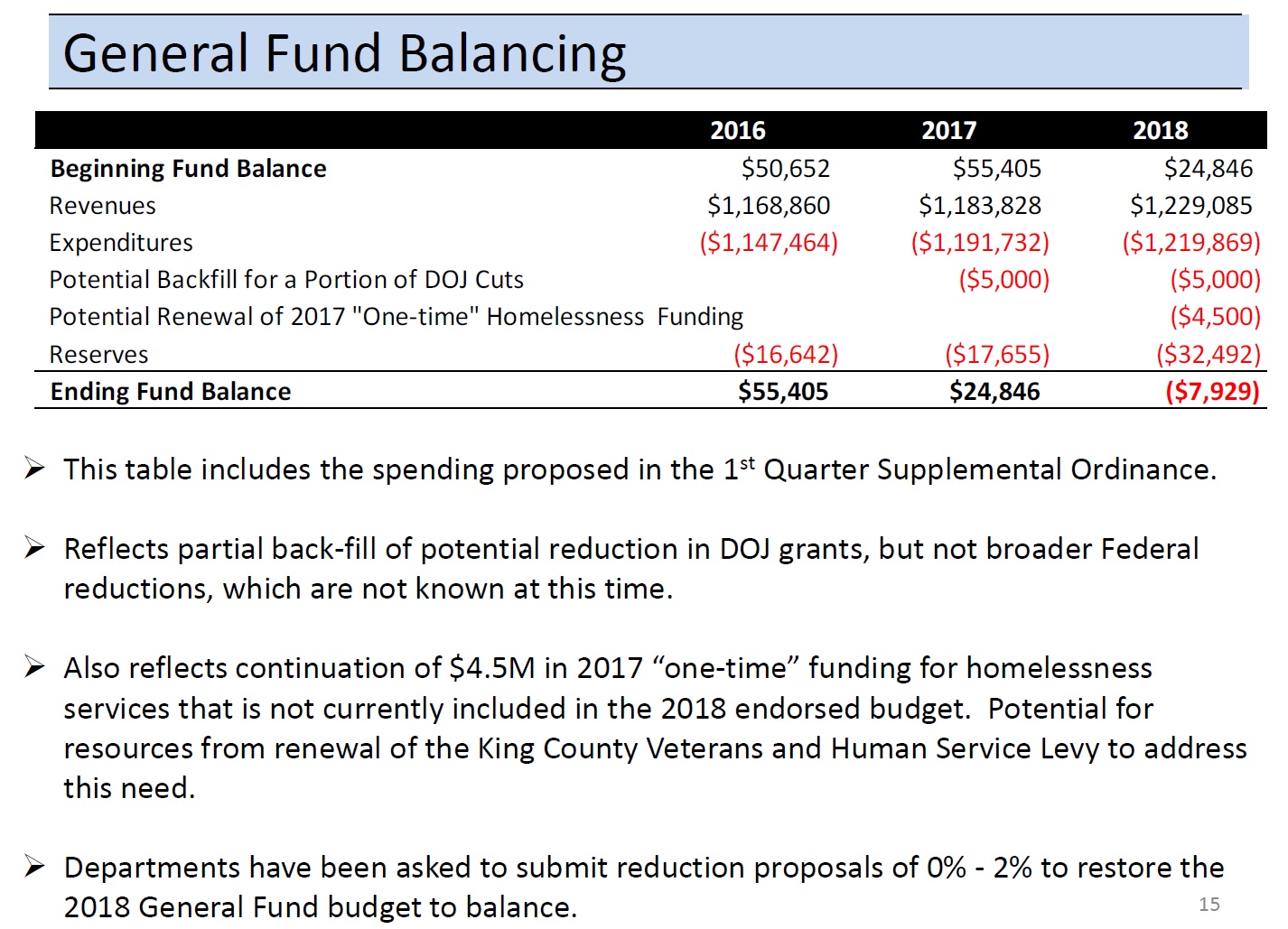 Actually, most of it isn’t really new expense yet; they are set-asides for anticipated expenses that aren’t 100% guaranteed yet. Including:

The city typically estimates revenues conservatively and underspends on expenses. In 2016, this led to ending the year with a general fund balance $5 million higher than it started, at $55 million. The plan, on paper, is to spend the $55 million balance down, plus a little bit more. If it were to happen to plan, the deficit at the end of 2018 would be $7.9 million — less than 1% of the city’s annual budget. But if revenues continue to outperform and departments continue to underspend, the deficit will likely disappear. Nevertheless, department heads have been asked to propose cuts of up to 2% of their budget in 2018 in case trimming needs to happen to balance the budget. A year ago they did the same thing, and in the end cuts weren’t necessary.

It is worrisome, if not unexpected, to see the economic trends flattening. The city budget has been using the extra revenues to fund transportation, human services, affordable housing, and other programs to address the city’s  most pressing needs. But the revenue growth will likely disappear before the problems do. The changes in the 2017 and 2018 budgets are, as Budget Committee chair Tim Burgess said today, “all very manageable.” But in 2019 and beyond, things may get much tougher. The challenge is to spend the extra revenues now to help solve problems while not getting so dependent on the higher spend rates that the city can’t cut back in a few years when it needs to balance the budget.