Recently there has been a cluster of gun-related incidents in Seattle, which have captured the attention of the media, the community, and the City Council. This morning, the Seattle Police Department briefed the Council on what they know, what they are still investigating, and how they are responding.

This morning’s presentation was made even more relevant by the fatal shooting last night at Alki Beach.

SPD’s Chris Fisher ran the Council through several charts to try to present a picture of gun violence trends in Seattle — and to dispel a few myths in the process. One common myth is that gun violence skyrockets during the summer months. Fisher showed this graph (click to expand), noting that Seattle doesn’t generally see a summer uptick. 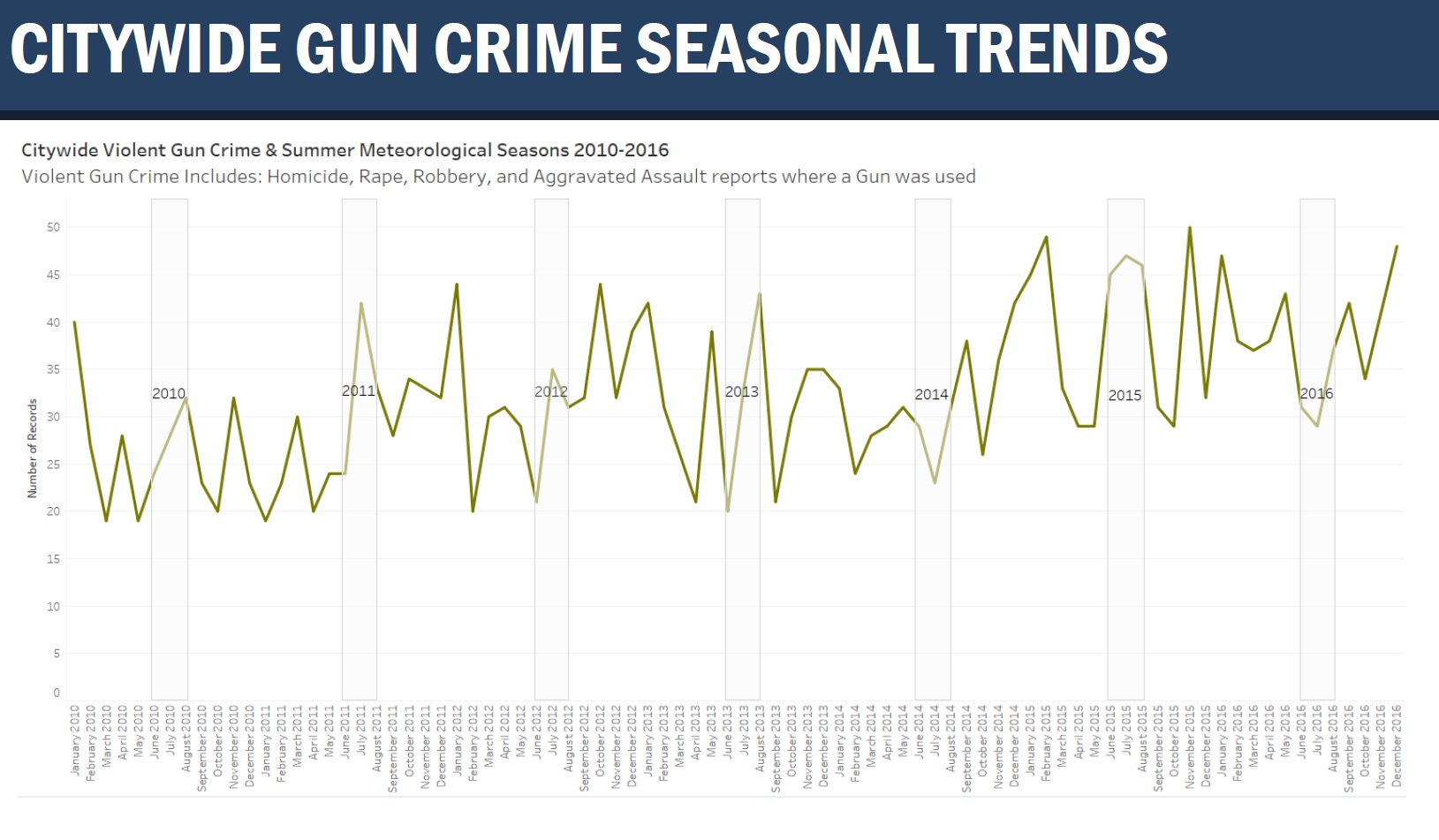 According to Fisher, research shows that seasonality in violent crime only occurs in cities in non-temperate climates, where hot weather can make people uncomfortable and agitated. Also, he noted that over the decades with the broad availability of air conditioning, seasonality has softened even in non-temperate zones. Compare that with the statistics for all calls to SPD, that clearly show summer spikes as people get out and are more active (the blue bars are the summer months). 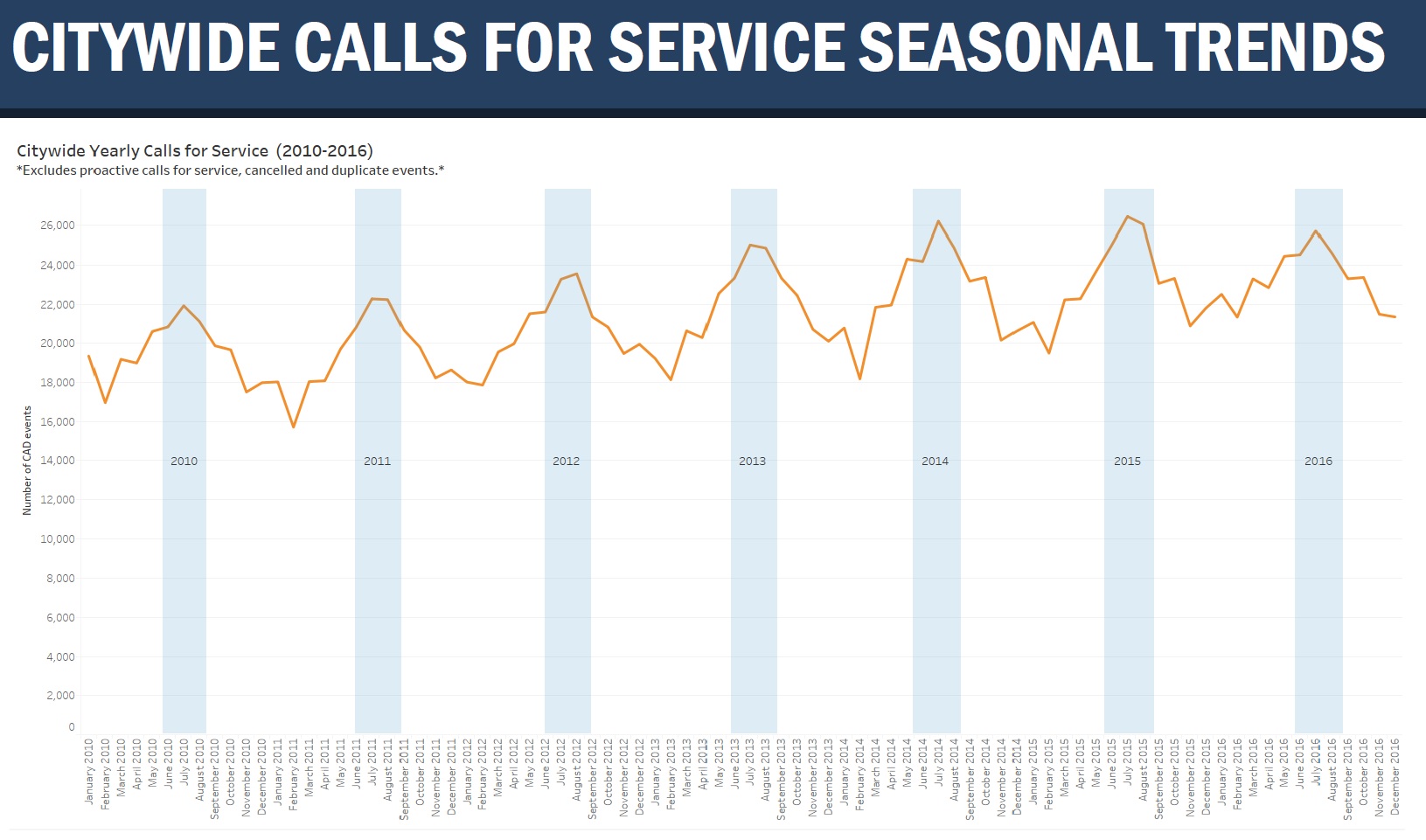 So gun violence is really an independent phenomenon in Seattle, not driven by overall activity.

If you squint at the gun-related crime numbers, you can sort of see an upward trend starting in late 2014, though the high volatility makes it challenging to understand. It should also be pointed out that overall Seattle’s gun violence level is very low, and the month-to-month numbers are low enough that one or two incidents makes a visible difference.  Still, the trend is there, and that poses many questions about what is driving it.

The Council members wanted to see the numbers broken out by police precinct, especially Council members Herbold and Gonzalez who both hail from West Seattle. Fisher provided data only for the South precinct, and his charts showed the same volatility but no clear trend. That left the Council members unsatisfied — and me too, so I dove into the data this afternoon to find out more.

If we break out the month-to-month gun crimes data by precinct, we get this: 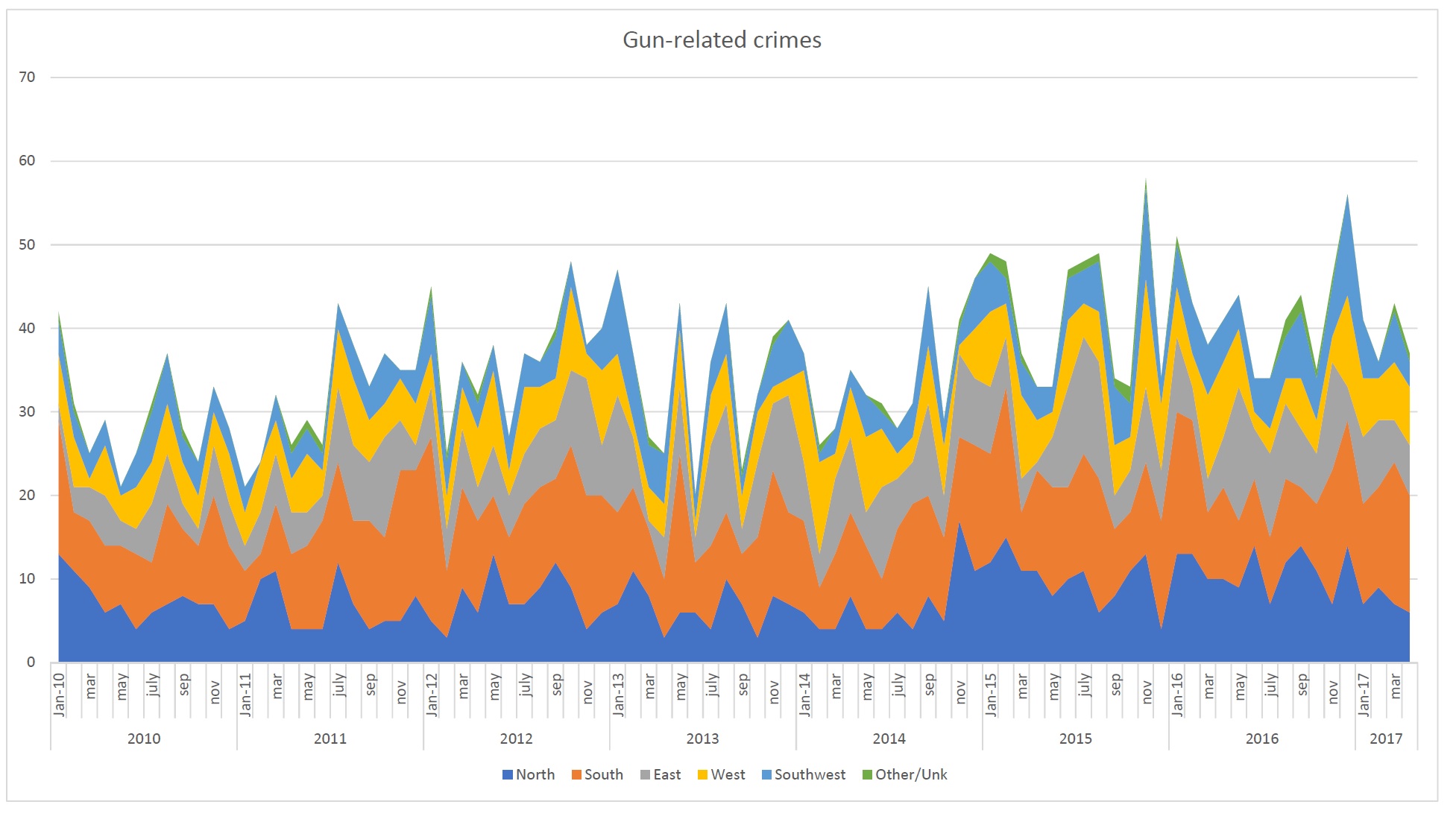 Unfortunately, the high month-to-month volatility is still masking what’s going on. So I took another shot at it, smoothing out the volatility by graphing the 6-month trailing average (i.e. the average of the prior six months, rather than just a single month). 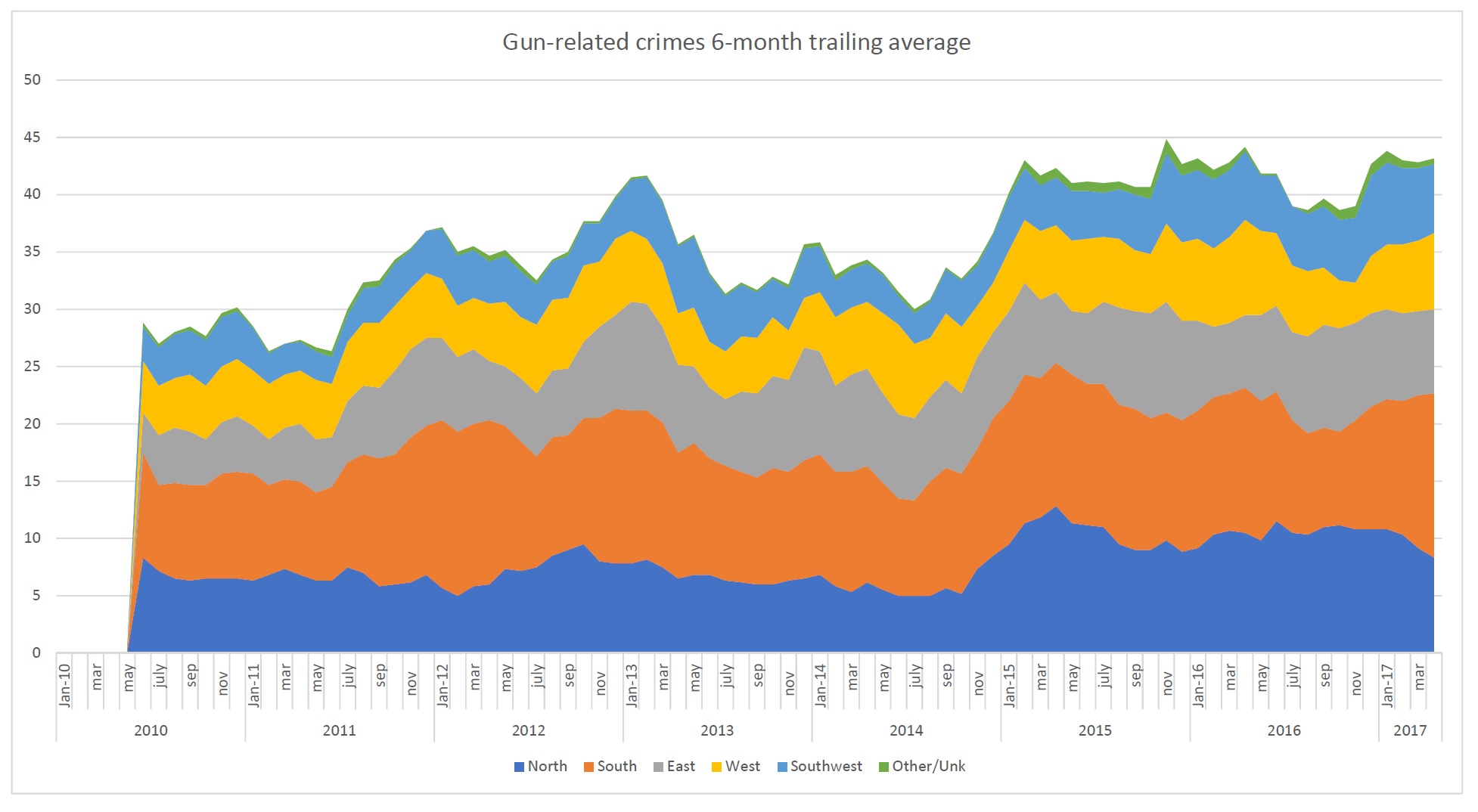 Suddenly the trends become much more clear. First, toward the end of 2014 there was a clear increase in gun-related crimes, which hit a new plateau and has been steady ever since. Second, there were increases in every precinct (including the south, despite Fisher’s claims to the contrary), but most notably in the north precinct — also spiking in late 2014 and remaining at a slightly higher level.

SPD produces a weekly “SeaStat” dashboard of data and charts on crime and police activity in the city. As of the most recent report, incidents of “shots fired” reported to the police year-to-date are running slightly ahead of last year, as are shooting incidents (the downside of trailing averages is they can hide a recently-emerging trend — though there isn’t yet enough data in 2017 to know whether it’s a trend or just normal volatility).

It’s worth emphasizing here, as it was in this morning’s Council meeting, that the numbers are not large and the increases are not dramatic; there is no sign of a major increase in gun violence in Seattle, and there is also no hard evidence of a recent uptick — the high volatility makes it feel like something has just changed, but the month-to-month numbers so far are reasonably consistent with the last 18 months. I should also emphasize that any amount of gun violence is bad; the level of gun violence in Seattle is not “acceptable” by any definition, but it’s not unusual and by national standards it’s still very low. We should be continuing to work to lower it, but there is simply no evidence of a new epidemic of gun violence here. As an aside: nationwide, the rate of gun violence has declined significantly since the early 1990’s.

One obvious question needs to be asked and answered: how much of the increase in raw numbers of gun-related crimes is simply due to Seattle’s rapid growth over the last few years? Here’s the gun-crime data compared to Seattle’s population growth since 2010. 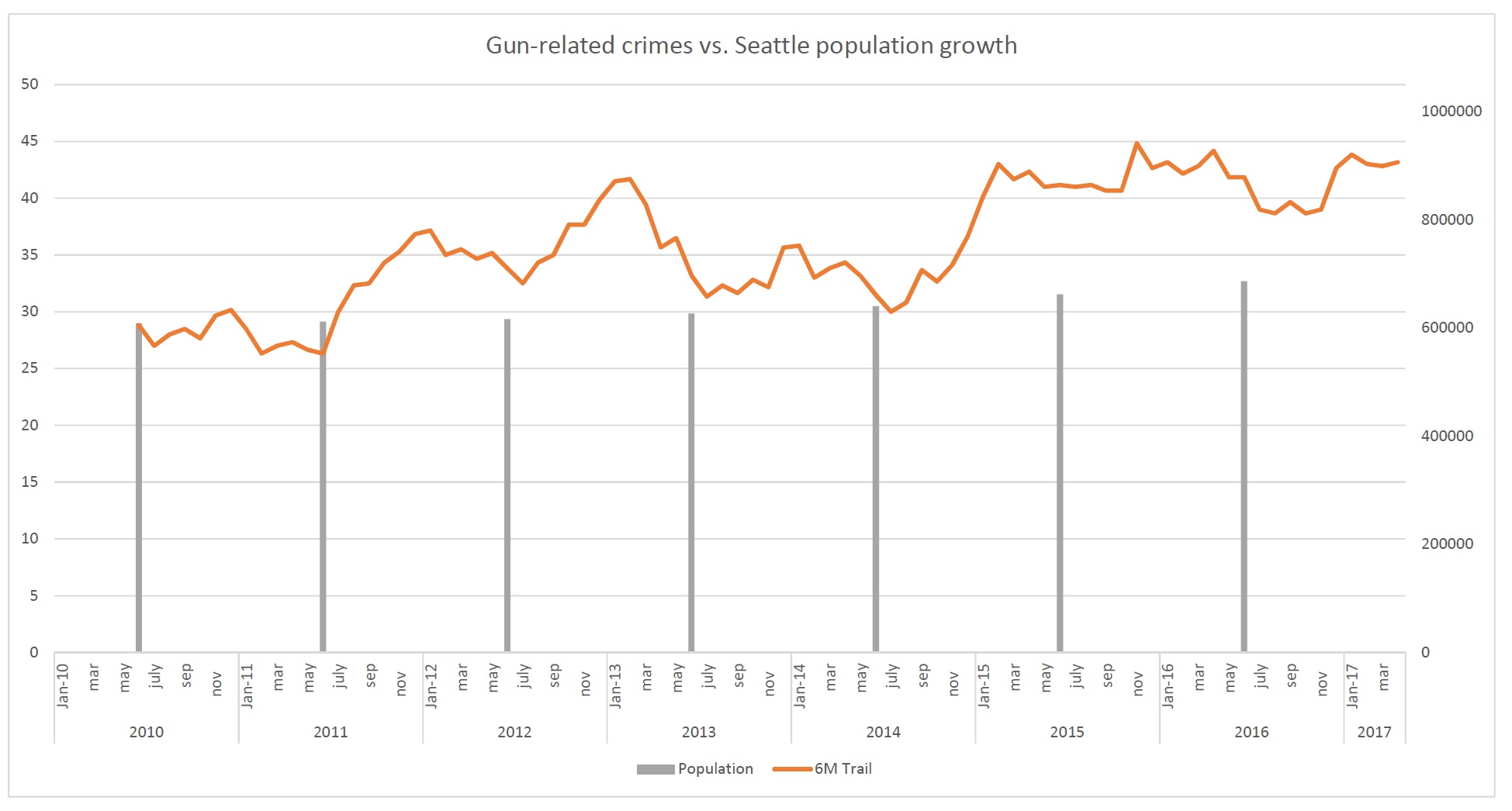 We can see there was a spike in crime in 2011 through early 2013, then it fell back down to a level proportional to overall growth. But the spike in late 2014  was a fairly significant rise over population growth, and it has remained at a higher level since then.

Another important question: why are the month-to-month numbers so volatile?  In part, as mentioned before, it’s because the numbers are so low; a single incident makes a visible difference, particularly within a precinct. But as SPD explained this morning, another part relates to the social context of shootings: the department isn’t seeing open “gang warfare” playing out on the streets of Seattle, but it is seeing follow-on shootings to settle the score by individuals (some possibly gang members) carrying a personal grudge. That leads to “clusters” of shooting incidents close in time, and often within vicinity of each other. This feeds a “cycle of violence” that perpetuates a heightened level of gun violence over the long term.

That leads to the discussion of how SPD is responding to gun-related violence. Their approach is multi-faceted, starting with community engagement. They are partnering with community groups, community leaders, and clergy to discuss community-based and community-led interventions to break the “cycle of violence” by implementing programs such as the Comprehensive Gang Model. SPD recognizes that simply arresting kids and throwing them in jail is not an effective solution since there is an enormous body of research showing that jail breeds violent offenders rather than rehabilitating them (and disproportionately impacts people of color). 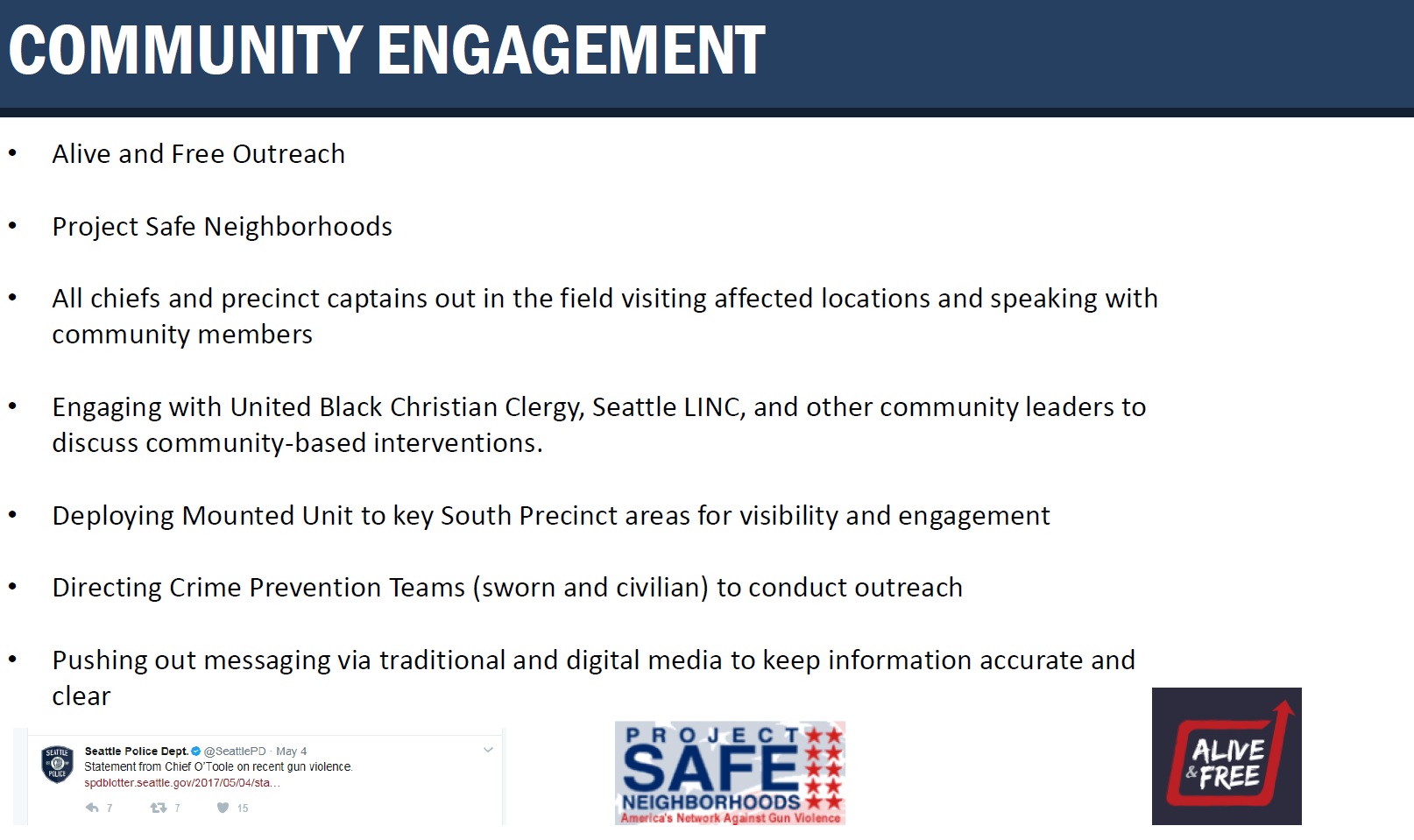 That said, SPD recognizes research that shows that chronic violent gun offenders have a disproportionate impact, so they are working to identify and prosecute them to get them off the streets — and hopefully into an intervention that will push them in a more positive direction. 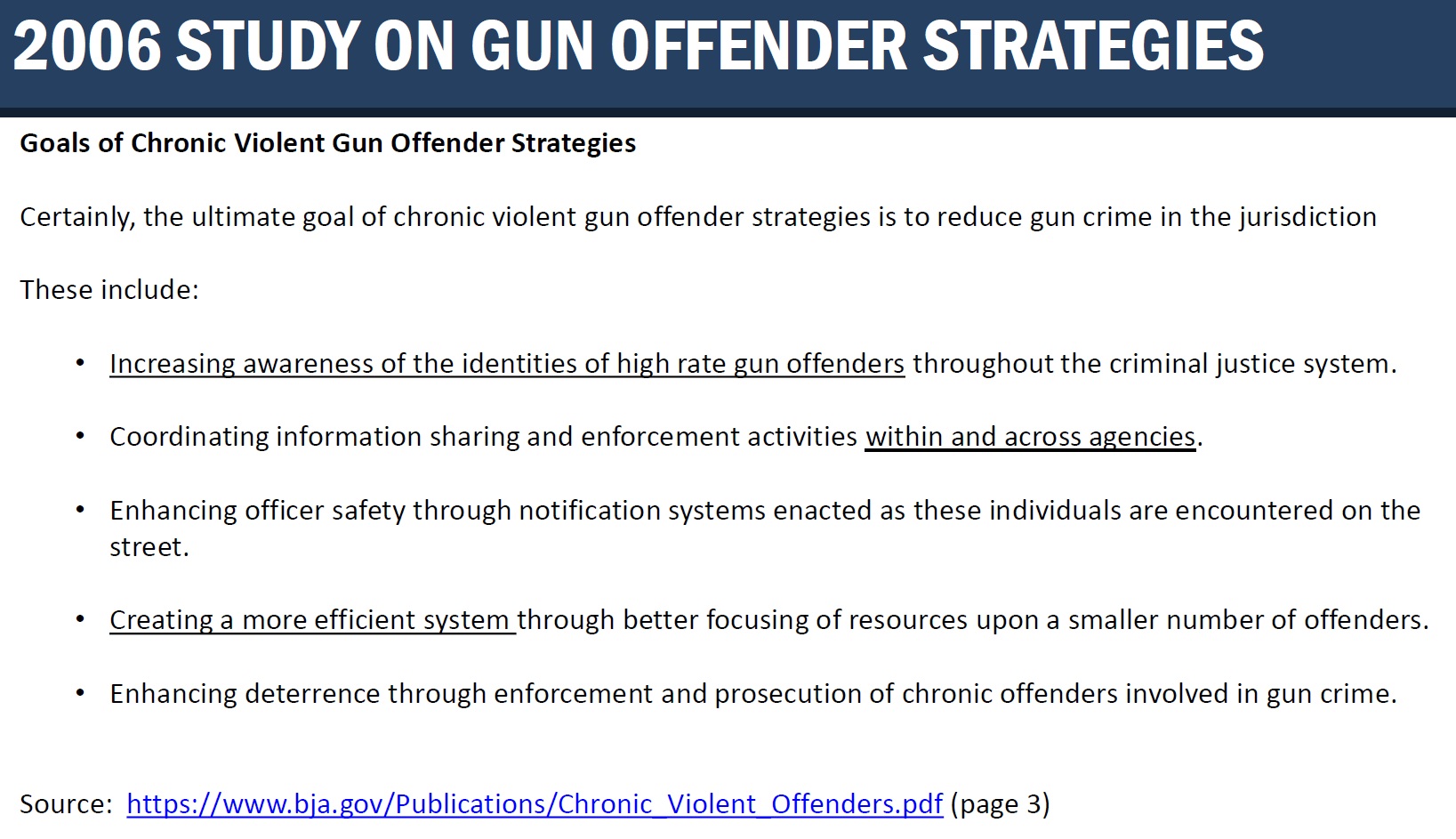 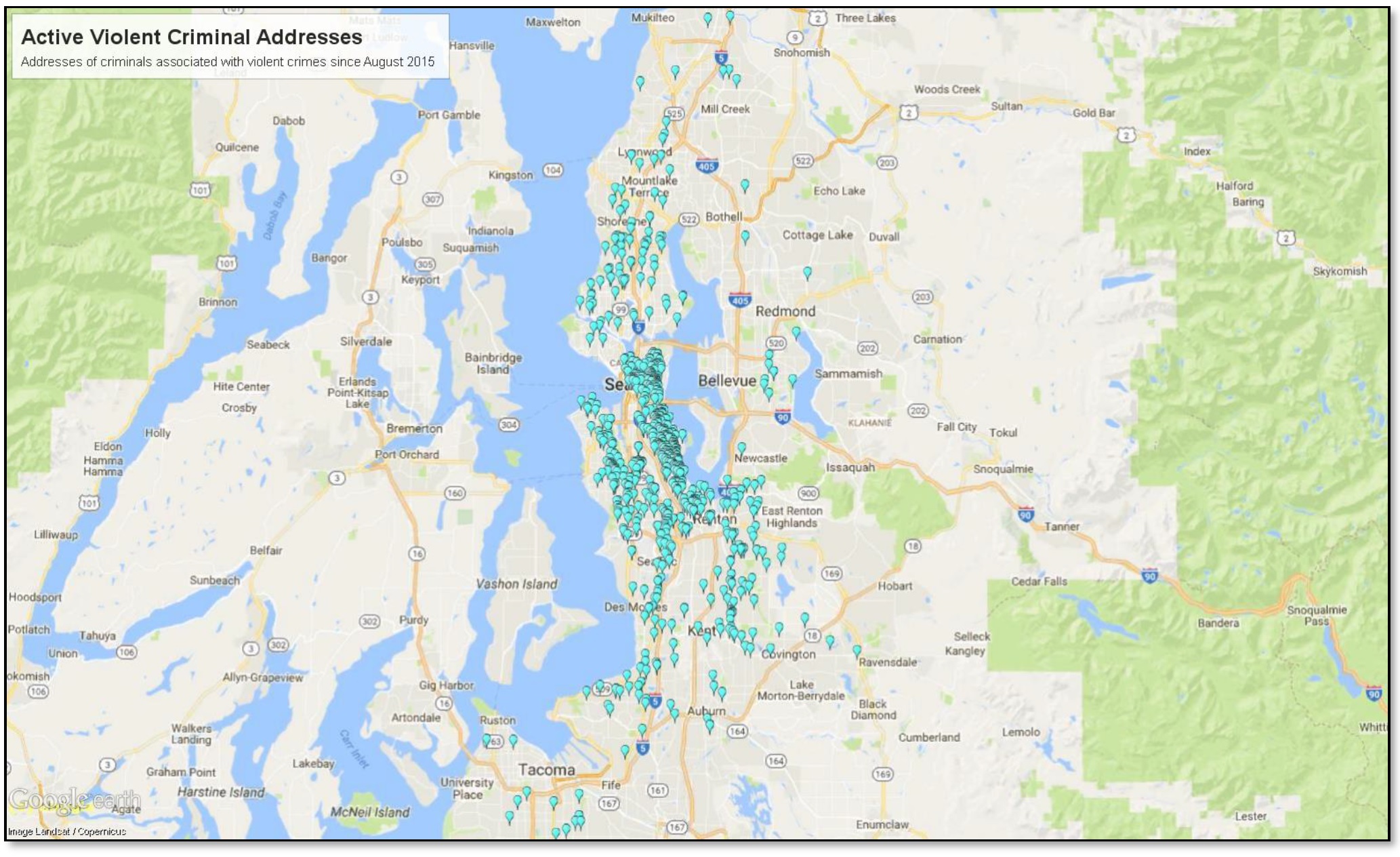 To that end, SPD is partnering with other law enforcement agencies in the region to share information and collaborate on investigations and enforcement activities. 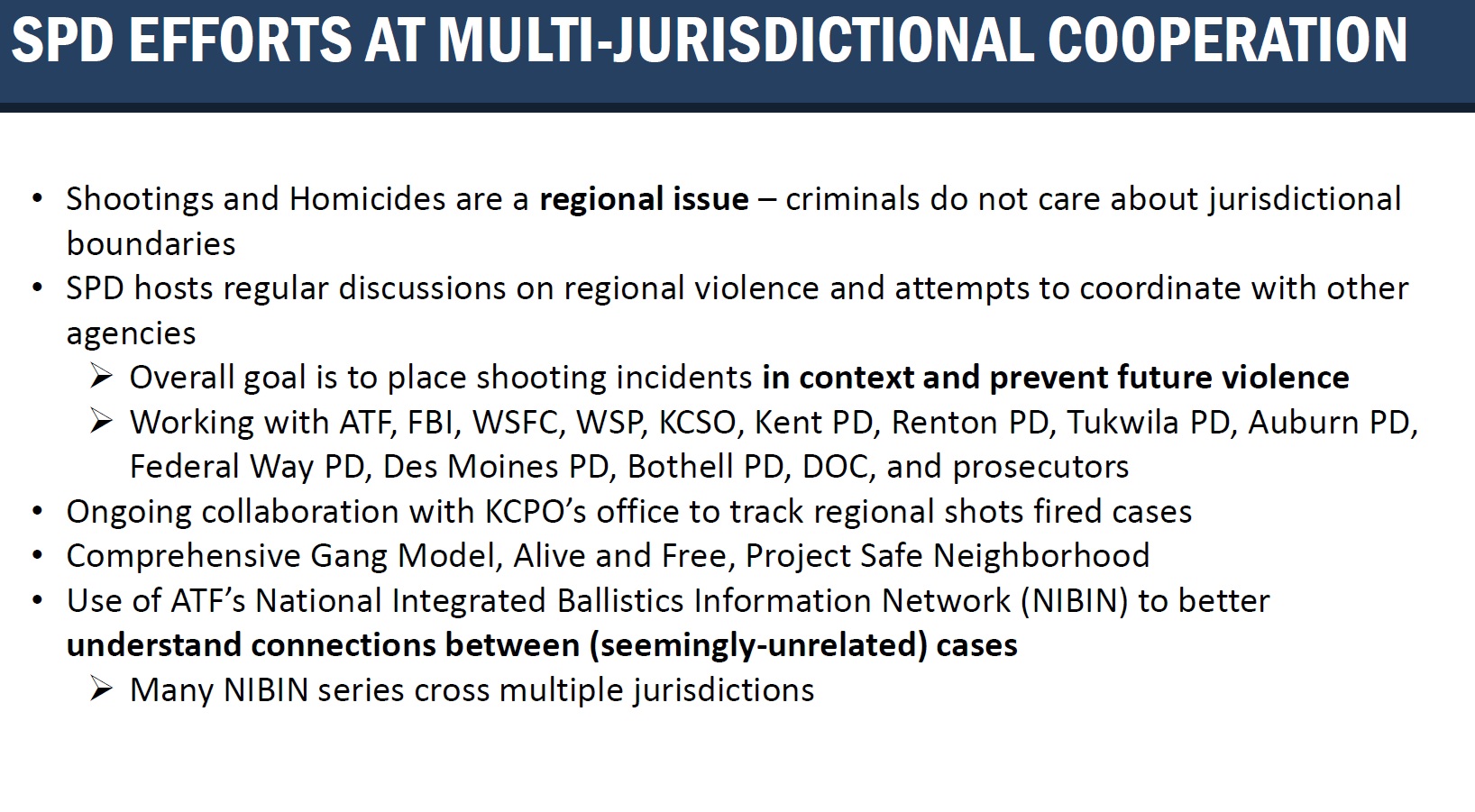 As for the Alki shooting last night, as of today it is still an active investigation. But to minimize the risk of follow-on incidents, SPD plans to have an increased presence at least for the next several days — and if Council member Herbold has her way, throughout the summer. That will likely mean a public meeting with the community, increased patrols along the beach (including bike patrols), and potentially one of SPD’s “Mobile Precinct” trailers which helps officers to spend more of their time in the neighborhood and on the beat rather than back at the precinct station.

I am left with one nagging question: what happened at the end of 2014 that caused gun violence to increase in Seattle? It turns out Seattle wasn’t alone; there was a nationwide spike in homicides in large cities — and most of them far more dramatic increases than Seattle’s. The DOJ researched the trend, with many possible explanations but no clear conclusion. Chicago saw a big uptick in its already high numbers in early 2016, and theories abound as to its cause as well. SPD shouldn’t let this question go; understanding what caused the numbers to go up will likely be critical to making them go back down — and stay down. 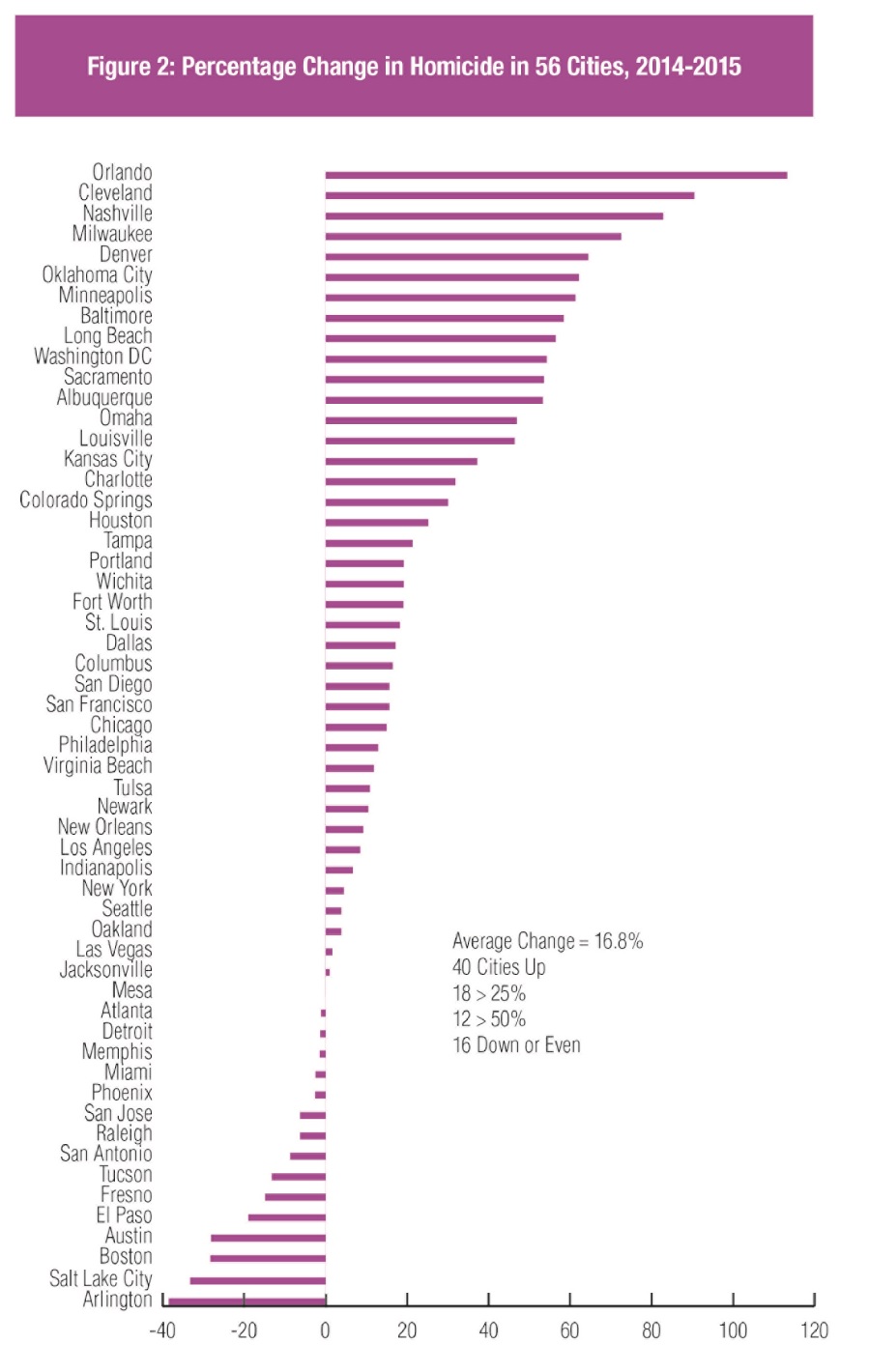 Credit to the Seattle Police Department for making so much of their data open to the public. Check out their crime dashboard, where you can dive into the crime statistics yourself.

You can watch this morning’s briefing here.

Researching and writing pieces like this take an enormous amount of work. If you enjoy this and other SCC Insight content, please consider making a contribution to support my work on my Patreon site.