This afternoon, Mayor Ed Murray held a press conference to announce that he has selected Oak View Group (OVG) for the renovation and future operation of Key Arena at Seattle Center, based on their proposal. 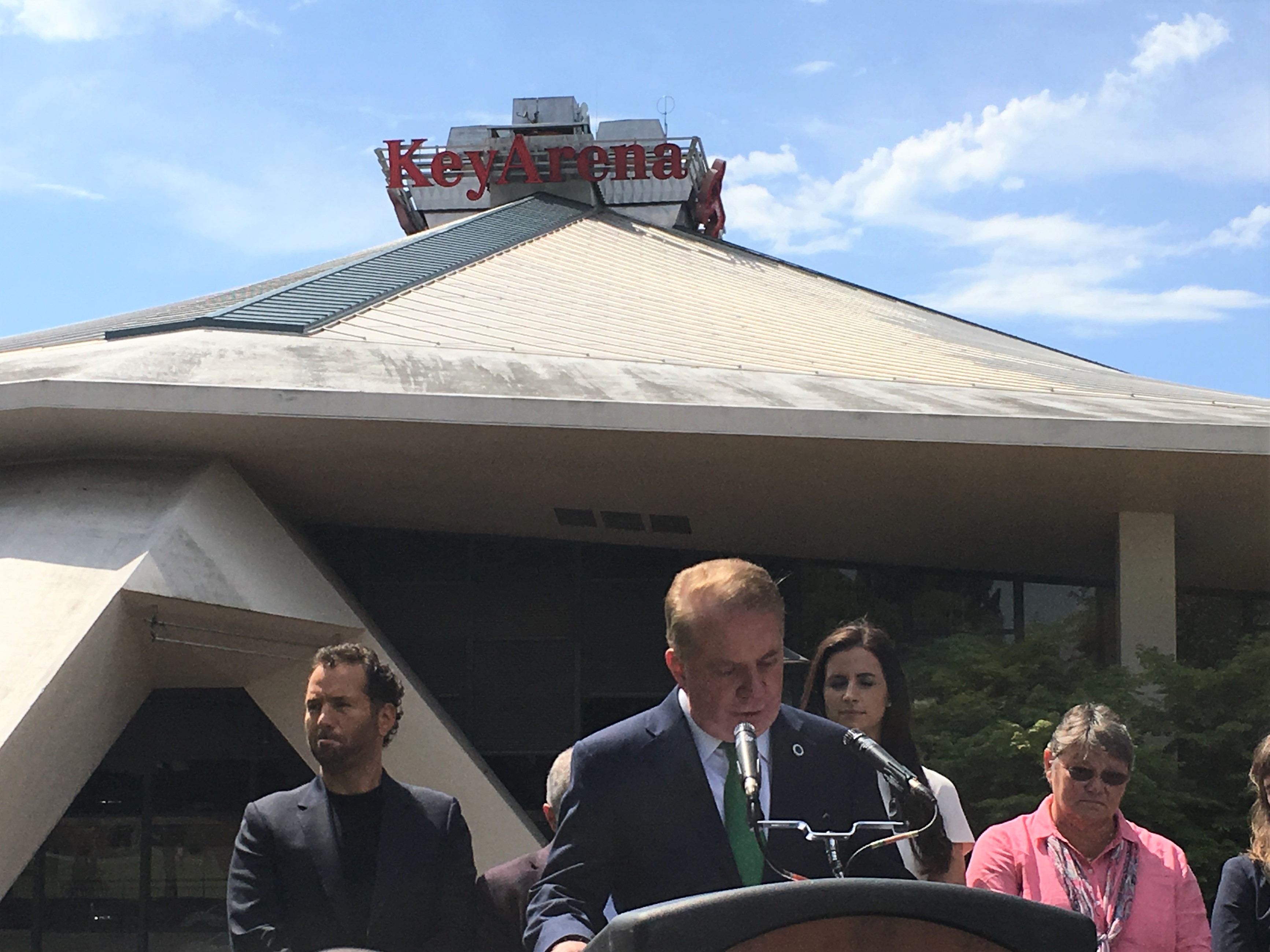 The RFP process got awkward last weekend when the only other bidder, AEG, withdrew its proposal and voiced complaints about how the city was handling the RFP process. Murray said today that he had already made his decision last Friday, before the AEG bid was withdrawn.

The Mayor said that there were three reasons he chose OVG’s proposal over AEG:

The final reports of the Community Advisory Panel and the city’s own internal review teams support those reasons. 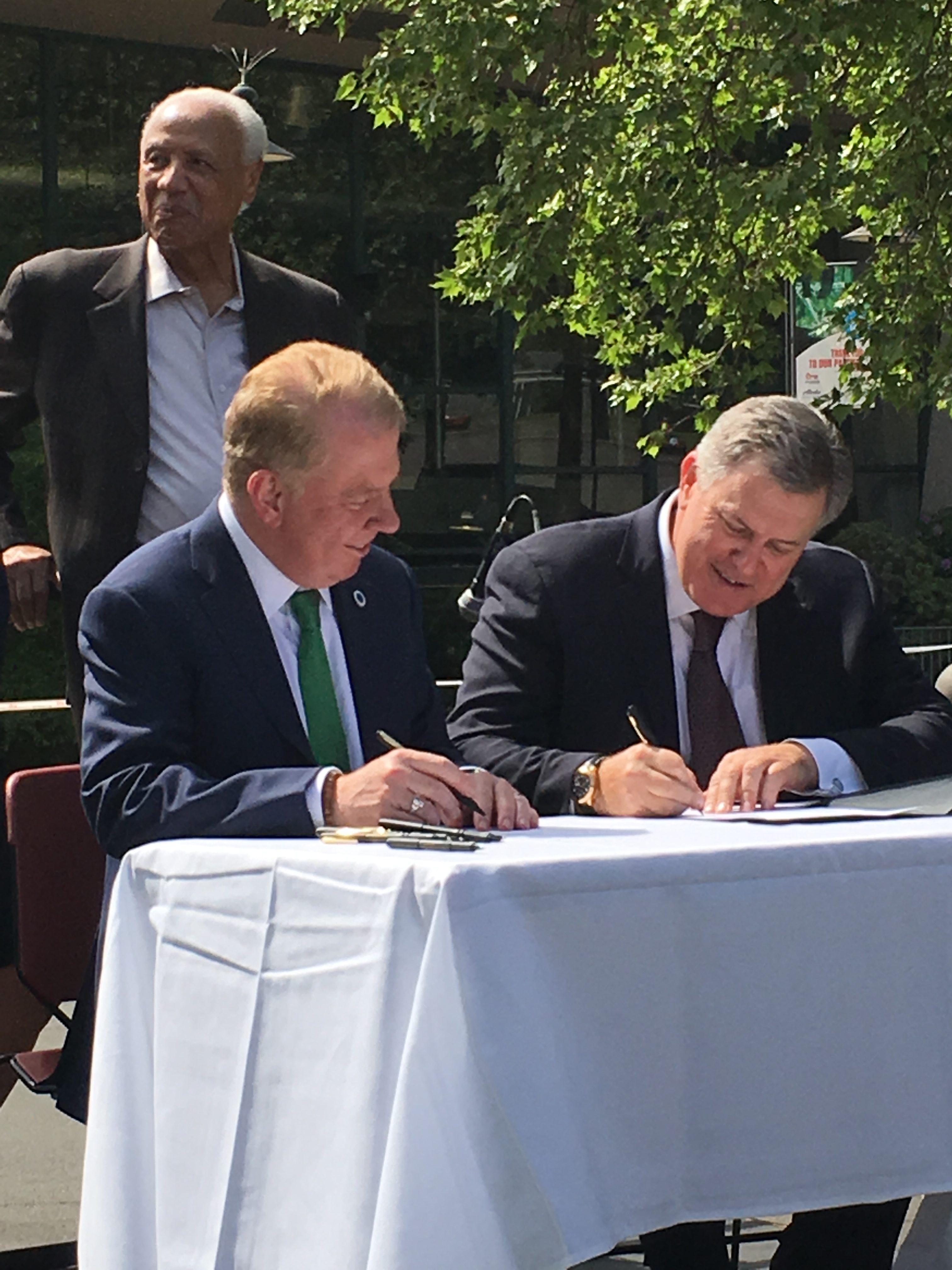 Murray and OVG CEO Tim Leiwecke signed a letter  today that commits them to work on a binding MOU for the redevelopment and operation of Key Arena, with a target to have that MOU completed by the end of the year (when Murray leaves office).  Murray noted that there were four things he thought still needed to be negotiated in the MOU that either modify or go beyond what is in OVG’s proposal:

Four executives from the OVG partnership spoke during the press conference: OVG CEO Tim Leiwecke, OVG Co-founder and head of MSG Entertainment  Irving Azoff (who also managed the Eagles), Live Nation CEO Michael Rapino, and OVG President of Business Development Francesca Leiwecke-Bodie. They stressed several points about their plan for Key Arena and how they planned to move forward.

First and foremost, they emphasized that they wanted to make Key Arena a world-class site for both sports and music. They noted that there were 25 concerts at Key Arena last year, which puts it near the bottom of the list of major music venues in North America — at a time when bands are touring more than ever and cities across the globe are building new music venues. They also highlighted that the ability to play back-to-back world-class venues in Seattle and Vancouver increases the attraction for artists to play here — and that Pearl Jam wants to be the first band to play in the renovated Key Arena. OVG’s goal is to make Key Arena one of the top ten performance arenas in North America. Likewise, they wanted to make it in the upper half of the NBA and NHL for revenue streams. 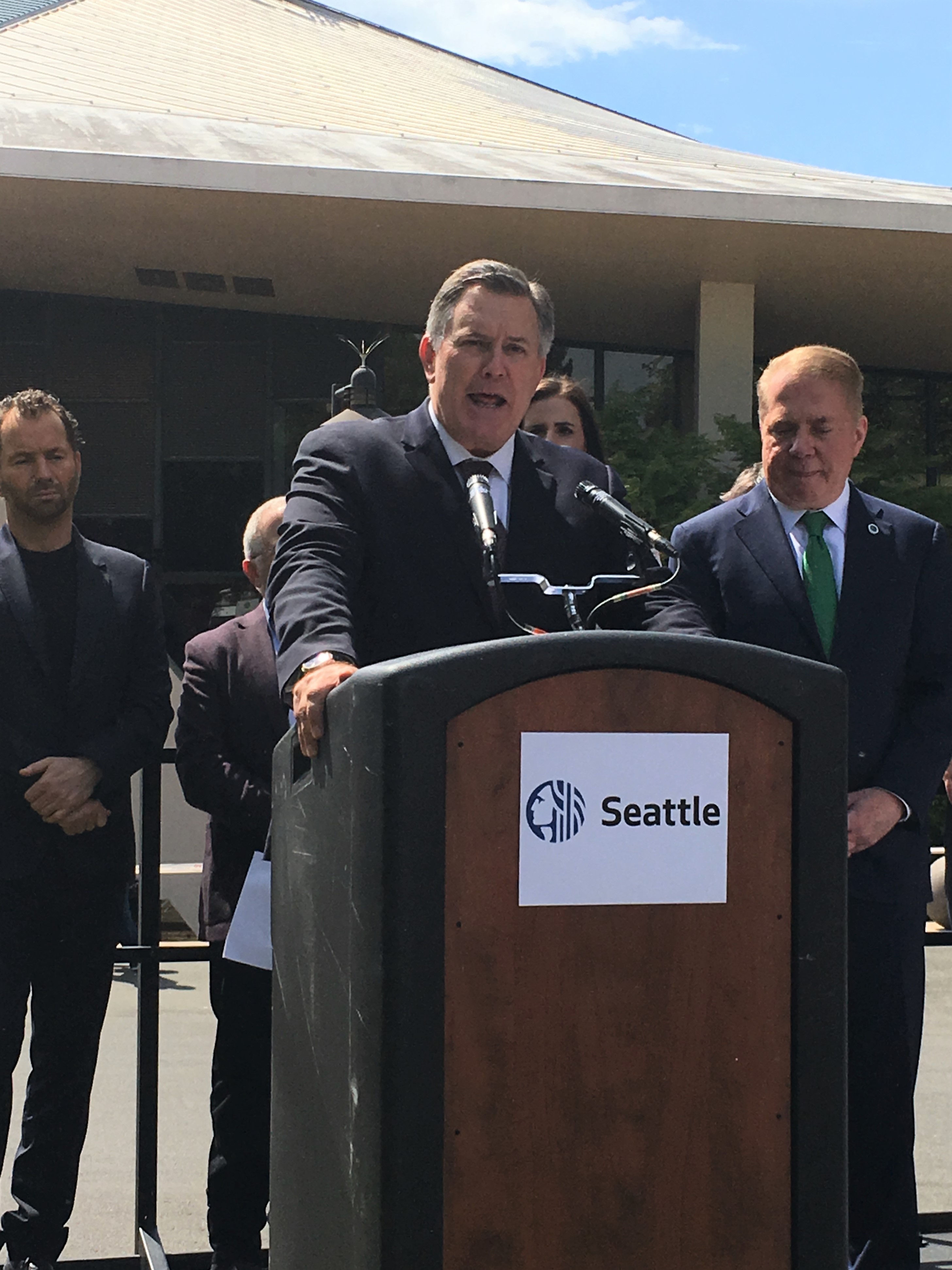 They also had some honest words about the likelihood of getting the Sonics back here as well as attracting an NHL franchise. They were quite blunt that the NBA is not expanding and the short-term prospects for relocating another NBA team here is low; they have spoken with the NBA commissioner and board, and understand that the NBA’s current business model (heavily based on TV broadcasts) is working for them and unlikely to change in the near future. But the NHL is a different story, and their primary goal right now is to get an NHL team here. The OVG team already has connections to the NHL: their concessions partner is Delaware North, whose chariman Jeremy Jacobs owns the Boston Bruins and serves as the Chairman of the NHL Board of Governors. Leiwecke himself previously served on the NHL executive committee and has been president of the Toronto Maple Leafs and the Los Angeles Kings. And today they announced that they are bringing on two additional partners: David Bonderman, part-owner of the Boston Celtics, and producer Jerry Bruckheimer. Both Bonderman and Bruckheimer have been trying to get NHL teams for several years. Clearly OVG is doing everything they can to get an NHL team to play in Key Arena as soon as possible. They also believe that the best argument for getting an NBA team in the future is to already have the arena built and an NHL team in place and thriving.

That brings us to the awkward fifth wheel in this relationship: Chris Hansen and his proposal for a SODO Arena. Hansen has an MOU with the city still in place for building the SOD Arena, but there are two roadblocks in his way. First, the MOU requires him to lock down an NBA team by November of this year. Second, his proposed arena plan requires a street vacation, which the City Council has rejected once, Hansen re-submitted under different terms, and is working its way through the approval process again.

Up until today, Murray has been noncommittal as to which arena plan he preferred. That all changed this afternoon, when the Mayor made clear that he wanted the OVG renovation of Key Arena to be the plan that goes forward. The press release from the Mayor’s office speaks to the ongoing legal requirement the city has to honor its MOU with Hansen while it moves forward with OVG:

While this process focused on the possible redevelopment of KeyArena, the City continues to honor its MOU with the group led by Chris Hansen, which continues into December of this year. Today’s announcement underscores the interest in building a world-class arena in Seattle, offering the City an option should the Hansen group fail to secure an NBA team, and helps address the future of the City-owned KeyArena.

The Mayor is deeply skeptical that Hansen will land an NBA team by November, and he is right to be skeptical. Even if the NBA were expanding and/or allowing existing teams to relocate — which they are not — now the OVG partnership, with its deep connections to professional sports leagues and their political machinations, is in direct and unfettered competition with Hansen for any opportunity that arises to get an NBA team here. And OVG is in many ways much better positioned to win that competition — or at least to block Hansen from landing a team before his November deadline.  Murray and the city government can simply sit in the bleachers and watch while keeping its hands clean.

The pending street vacation request is awkward, though. At this point, the city would love to see it go away, but it needs to act in good faith to process it in order to meet its commitments under the MOU with Hansen. While the City Council could simply reject it again, Murray’s administration is stuck: they recommended it for approval the fist time, and Hansen re-submitted it in a form which make it even more attractive to both the city and the Council. They will be hard-pressed to come up with grounds to reject it this time, and at some point they will need to forward it on to the City Council — though so far they have not indicated any timeline for doing so. This raises two questions: first, can they plausibly stall until after November, at which point the MOU expires along with the city’s commitment to Hansen? Second, isn’t this just a game given that Hansen has almost no chance of acquiring an NBA team this year?

In any event, this is all bad news for Hansen. Murray wants his SODO Arena proposal to go away and will do the absolute minimum legally required to move it forward. OVG and its partners have largely foreclosed Hansen’s ability to attract either an NBA or an NHL team. And his time is quickly running out.  Leiwecke threw him a bone today, offering to bring him in as a partner in acquiring an NBA team with OVG to play in Key Arena. At this point, that might be Hansen’s best option, and he could still make a bundle by redeveloping all of the real estate he has accumulated in SODO.

With the signing of the letter today between the city and OVG, the Key Arena renovation moves on to the next stage. They hope to complete and sign a binding agreement by the end of December (conveniently after Hansen’s MOU expires); that agreement will then need to come before the City Council for its approval. Then Leiwecke said that he expects it will take about a year to design and negotiate with the city the final design for the renovation and the plans for all the ancillary activities that are part of the larger proposal. Construction could start as soon as January 2019, but Leiwecke noted today that the city is currently committed to hosting an NCAA tournament at Key Arena in early 2019 and that might delay groundbreaking until March.

Of course, that assumes that the city and OVG reach agreement on the all the details this year. That is not necessarily a sure bet. The city’s review of OVG’s proposal found issues with their financial plan, and in particular with their optimistic revenue projections. That will make the negotiations even more difficult over the city’s obligation to reinvest tax revenues as well as who controls revenues from the Seattle Center parking garages. Today everyone was all smiles, but if either side can’t make the numbers work, they may choose to walk away. On top of that, the City Council may not like the agreement that the Mayor’s team negotiates; that happened with the SODO Arena MOU, and the Council re-negotiated the agreement with Hansen. Several Council members have already told the Mayor’s staff that this time they wish to be involved throughout the negotiation process.

But if everything comes together, Seattle Center could have a new world-class arena, under a historic roof, by the middle of 2021 — with more concerts, an NHL team in place, and strong prospects for bringing back the Sonics in the future.

According to a spokesperson for the City Council, its Select Committee on Arenas will meet on July 10th to be briefed on the agreement with OVG.