The City Council will get a briefing Monday morning on a new study by researchers at U.C. Berkeley on the effects on the local food services industry of Seattle’s phasing-in of a $15 minimum wage.

Before we dive in to the details, there are some important caveats: 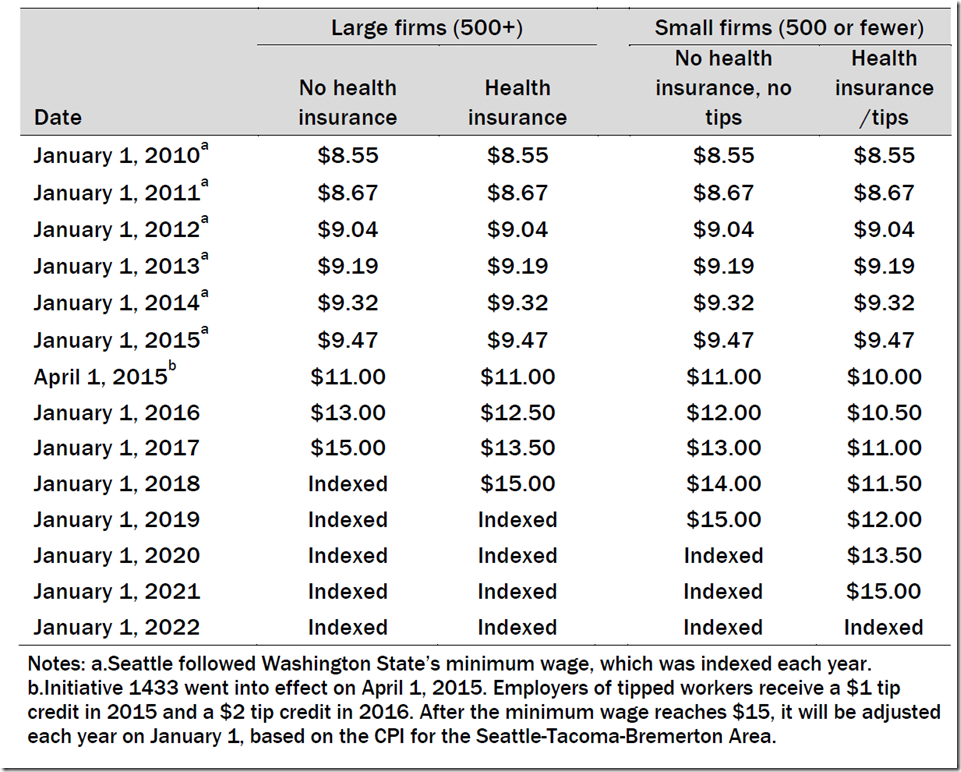 So now that we have a point of comparison, we can ask the big questions:

Did wages go up? You can see from the above graphs that yes, they did go up, in some cases dramatically. For full-service restaurants, however, which are most likely to allow employees to receive tips, the increase wasn’t nearly as much.

Did the increase in wages depress employment in the sector? This is the case where the contrafactual is the most useful, since Seattle has continued to see explosive growth over the past two years. The contrafactual gives us a rough estimate as to how much employment growth we would have seen without the minimum wage in place. It looks like Seattle’s employment, while more volatile than “synthetic Seattle”,” gives about the same end result, perhaps suggesting that the steps up in the minimum wage might be causing small shocks to the system that settle out over time. But as of March 2016, there is no sign that the increases in minimum wage are depressing employment in the food services sector over the long term.

There are two more related caveats worth discussing: first, since the data only goes through the first quarter of 2016, three months after the step up to $13, we can’t draw conclusions about the long-term effects of a $13 minimum wage. Second, since at every step so far there have been multiple rates simultaneously for different businesses within each subsector, we can’t draw definitive conclusions about whether the highest rate in effect at any point along the ramp-up has a “threshold effect” at or above which things change. We can pretty definitely say $10/hour wasn’t a threshold because as of January 1, 2015 all food service businesses were paying at least that much and no effects were seen in the following 15 months. And we can probably say that $11/hour wasn’t a threshold either, since most businesses went to $11/hour at that time. And there simply isn’t data to support any conclusions above $11 at this point.

Many other questions need to be looked at as well. For example: did the number of new restaurant openings decline, or the number of closed restaurants increase? Did restaurants shift their policies on tips or offering healthcare as the minimum wage took effect?

As of a year ago, the sky wasn’t falling. We’ll learn more as economists continue to study the rollout of Seattle’s minimum wage. In the meantime, take comfort in the knowledge that the city will continue to keep economics researchers gainfully employed as this plays out over the next several years.