At the request of Council member Lisa Herbold, the Office of the City Auditor has generated a comprehensive plan for information-gathering and evaluation of the city’s Navigation Team.

The Auditor’s report isn’t the evaluation itself, rather it’s a set of recommendations on what should be evaluated and what data should be collected in that process in order to understand the impact that the Navigation Team is having.

The Auditor began the process by reviewing the Theory of Change for the Navigation Team, which it includes in Appendix B of its report. A Theory of Change is an organization’s statement of the things that will be different if it is successful in its work, and the steps it intends to take to achieve that difference.

The goal of the Navigation Team is to provide outreach to people living unsheltered that is efficient and effective at moving people out of hazardous conditions and onto a path toward, health, stability and permanent housing.

In truth, though, the Navigation Team’s mission is broader, and inherently conflicted. As FAS Director Fred Podesta describes in his letter in response to the Auditor’s report (attached as Appendix C),

The team offers outreach and safe alternatives to the occupants of the most hazardous unauthorized encampments in the City, requires occupants to move and abates the hazardous conditions.

Beyond doing outreach, the Navigation Team also prioritizes and coordinates cleanups of unsanctioned homeless encampments. The process by which it prioritizes and schedules cleanups is opaque, though it involves not only consideration of the safety and well-being of encampment residents but also more general public health and safety concerns as well as the complaints registered by Seattle residents (which are tracked in a database). This raises a number of questions about how the Navigation Team balances those competing priorities as it does its work. More to the point, it shows that the Navigation Team’s work is not accurately represented by its own Theory of Change.

In reviewing the Navigation Team’s Theory of Change and the work of similar outreach teams in other cities, the Auditor raised several questions that should be answered in evaluations and reports, in three overarching themes:

Some of the specific questions they raise include:

These questions are on top of the ones raised by the recent report from the Office of Civil Rights on the city’s homeless encampment removals. That report raised important questions about the Nav Team’s ability to carry out its mission now that the shelter alternatives it has been most successful in offering are all full, and about the lack of follow-up and data collection on outcomes for the people relocated from an encampment. But most important, it pointed to the lack of transparency in how the Navigation Team is prioritizing encampments for removal.

The Auditor’s Report lays out an aggressive schedule for reports in the first half of 2018: 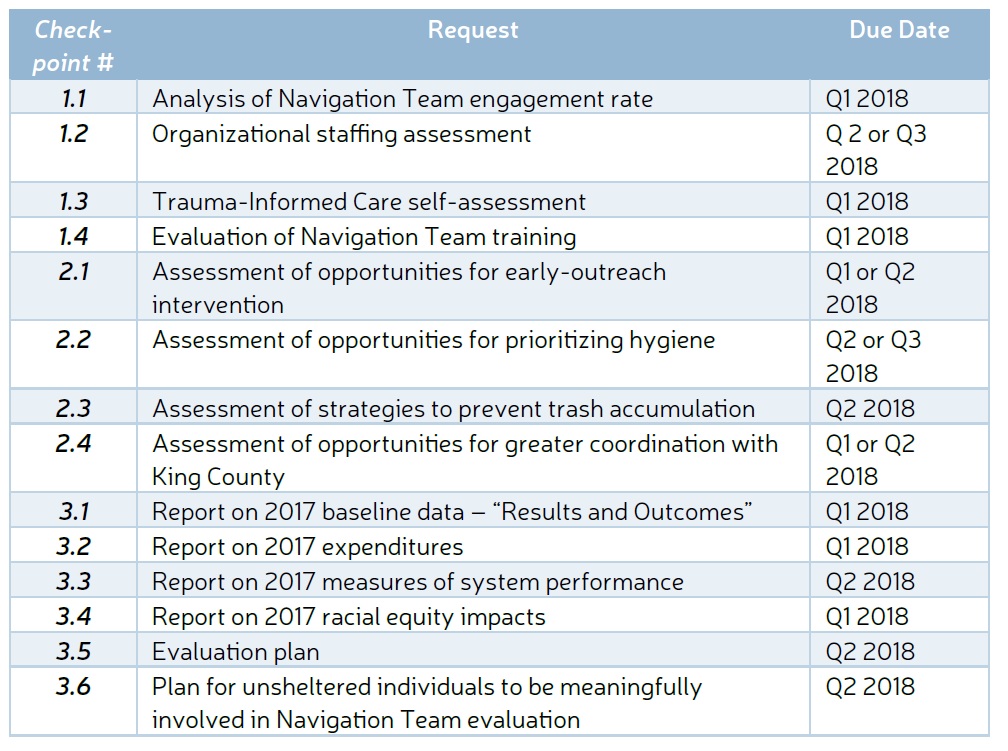 Podesta has agreed to this schedule, though he objects to its focus on the outreach elements of the Navigation Team’s work (despite the fact that the team’s own Theory of Change centers on outreach).

After careful review, we are very concerned that the reporting plan focused only on outreach elements of the Navigation Team, without the context of eliminating hazards and the opportunity for individual change created by closing an encampment to abate those hazards. None the less, we are committed to improving the Navigation Team and will provide the reports identified in this plan.

Podesta also raises the concern that the reporting work will mean less time for the team doing actual outreach in the field.

If delivered as recommended, these reports will provide new and interesting insights into how the Navigation Team is working and hopefully how it may be improved. And no doubt it will lead to some difficult conversations about how encampment removals are prioritized and scheduled, whether SPD’s involvement adds or detracts from the effort, and how the Navigation Team should move forward given the current constraints on alternative shelter.