While the Mayor’s Office has been moving forward with the selection process for a new Chief of Police, the Community Police Commission (CPC) has continued to scrutinize the process used to narrow the candidate list to three — and press for increased transparency.

When last we checked in at the end of May, the CPC had sent a letter to the Mayor demanding extensive records on the selection process so that the CPC could better understand how the “competitive exam” phase eliminated, which was largely hidden from view, eliminated the only woman (and a woman of color) among the five finalists.

According to CPC co-chair Isaac Ruiz, Durkan met with CPC co-chairs shortly after the announcement of the three finalists, assured them that there was no litmus test that the city needed to hire an external candidate (despite a personal recommendation from the four search committee co-chairs that it did need to), and promised that her office would deliver the requested documents to them. Ruiz said that since then CPC executive director Fe Lopez has been communicating with Durkan’s attorney, Ian Warner, about delivery of those documents, but as of earlier this week nothing had been delivered beyond those made available in the immediate aftermath of the May 25 finalist announcement. On Wednesday of this week, the CPC raised the stakes: they sent a letter to the City Council requesting that it refuse to consider the confirmation of any nomination for police chief from Durkan until the CPC receives the records it had requested and has time to review them and provide input to the Council. According to Wednesday’s letter, Warner had promised that the CPC would be receiving documents within 48 hours (i.e. by today/Friday). Also, the CPC has retained an equal employment opportunity expert, and will be asking that person to “assess any EEO or legal compliance issues in the design and execution of the search process.”  According to Ruiz, the CPC is also doing its own independent research. “The CPC is researching the candidates,” Ruiz said. “That includes visits to their cities to meet with community members. That’s a process that’s ongoing.”  Ruiz expressed concern about whether the clock was running out on the CPC’s opportunity to provide input to the Mayor, given her previously stated intention to nominate someone by the end of June. “My bigger concern is just timing. We need to get them in time to be able to do something useful with the documents.”

“For each of the candidates we are doing site visits to the cities where they have been working. And so we have teams that include members of the community, as well as members for my team, members from policing, and they’re going into these three cities. In fact right now the team’s in Pittsburgh and they’re meeting with ACLU and NAACP, groups like that, as well as business leaders, police unions, community groups, government officials, to really do a deep dive on each of these candidates to make sure that they have those kinds of ties to community, to see what kinds of reports we get back. So there will be site visits in each of the locations where those candidates have been. I was able to meet the candidates for the first time this week. I met with all three of them. I was very impressed with each of them. I look forward to getting the deeper report on them and once I get that that report I will have a formal interview with each of the candidates, and then from those three candidates select and nominate someone and the City Council will confirm.”

As to the CPC’s requests:

“Most of the records that they have asked for have been public records for a month. The day the candidates were selected they were posted online, so we will be responding to them more in-depth, but I think this process was one that actually had a broader, deeper community engagement than any police search before… We’re communicating with them. I think there’s a misunderstanding about… the records they did have, but we’ll be responding to them as quickly as we can. I think most of the records they actually have, there just was not a clear communication. I met with the chairs of the CPC shortly after the selection was made, and we walked through a number of issues as well as the request for records. So I’m hopeful that all the records that they have requested will be produced quickly.”

Late this afternoon, Durkan sent a letter to the CPC along with a new tranche of documents and records. The letter itself spells out more details on the search process that the CPC had requested, including what training and instructions the search committee had received, the full list of “assessors” who conducted the competitive exam that narrowed the finalists to three, and the information sources considered by the assessors.

The new document dump delivers on more of the CPC’s requests. It includes:

The most eye-catching of all of these documents are the assessment forms that the five assessors used to rate the five semi-finalists. The forms lay out the four criteria for assessment:

The form asks the assessors to give each candidate an aggregate “pass/fail” — not on each individual criteria, but on the four as a whole. According to the signed forms, all five assessors were in agreement on “pass” ratings for the thee candidates who moved on to the final round, and all five unanimously gave “fail” ratings to Chief Best. The forms don’t provide space for the assessors to elaborate on the reasoning behind their assessments. The agenda for the examination process makes clear that time was set aside for discussion among the assessors with city HR staff administering the process, but it’s likely that there are no additional written materials created by the assessors themselves related to how they derived their individual assessments, and the verbal conversations are confidential. 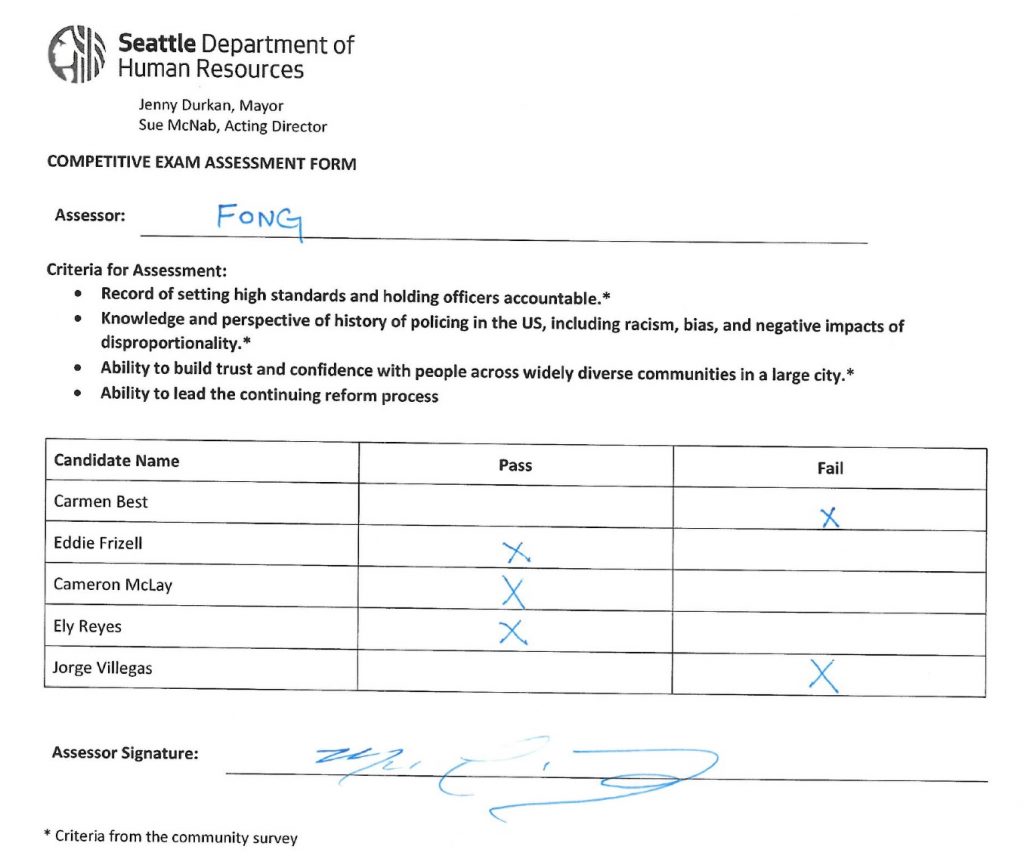 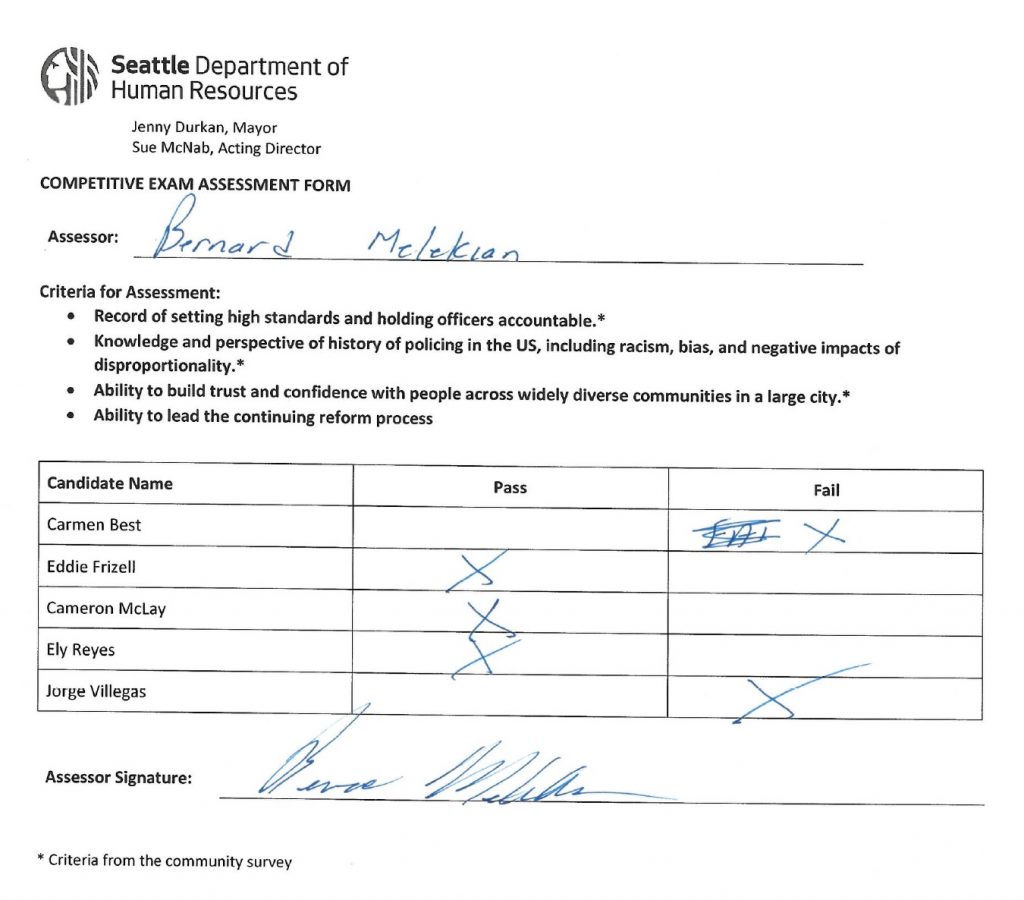 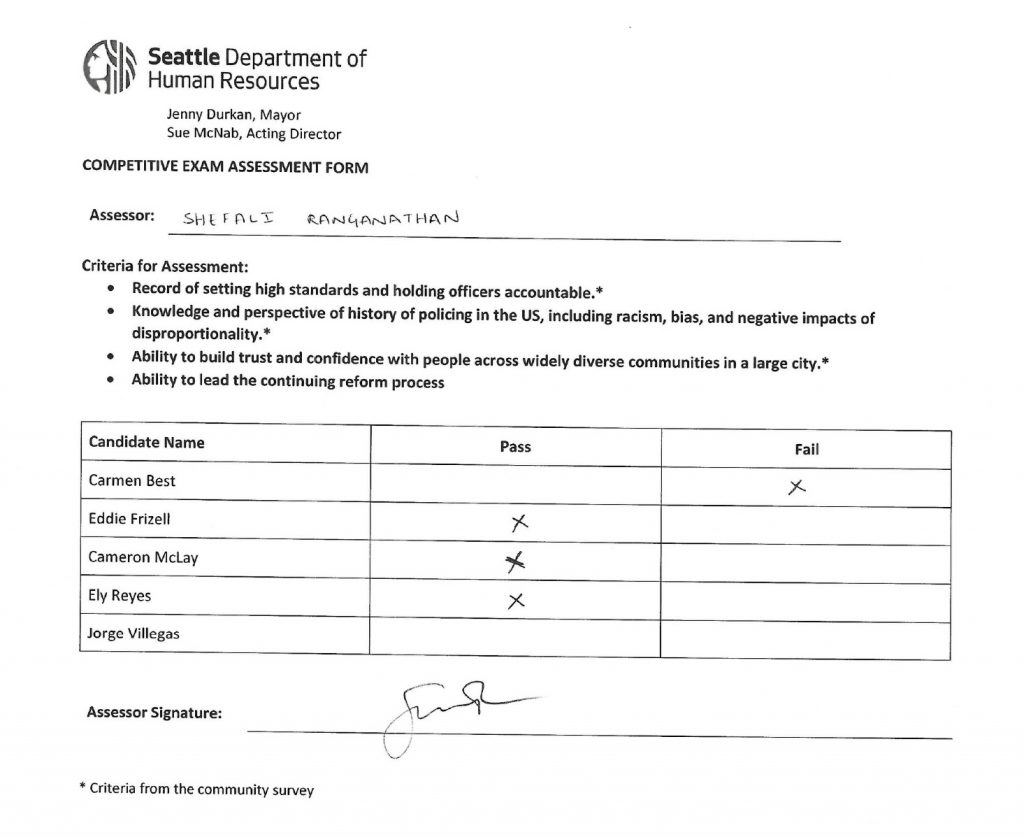 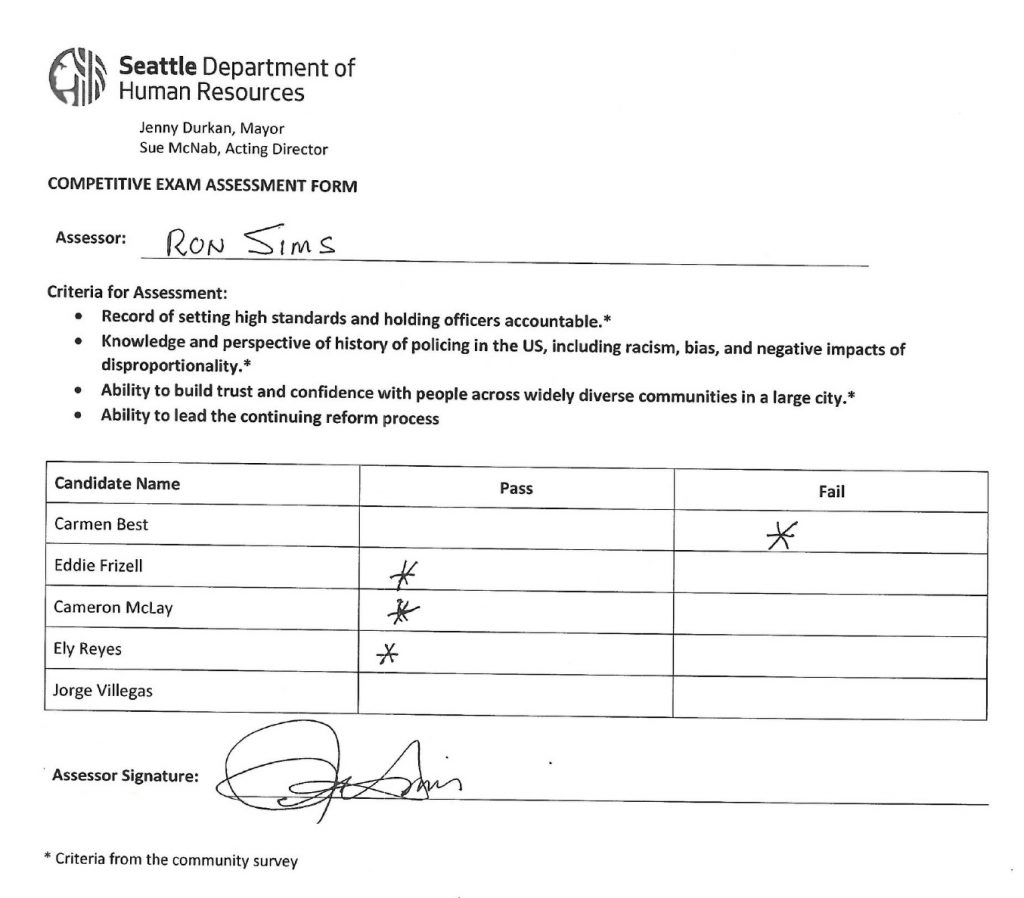 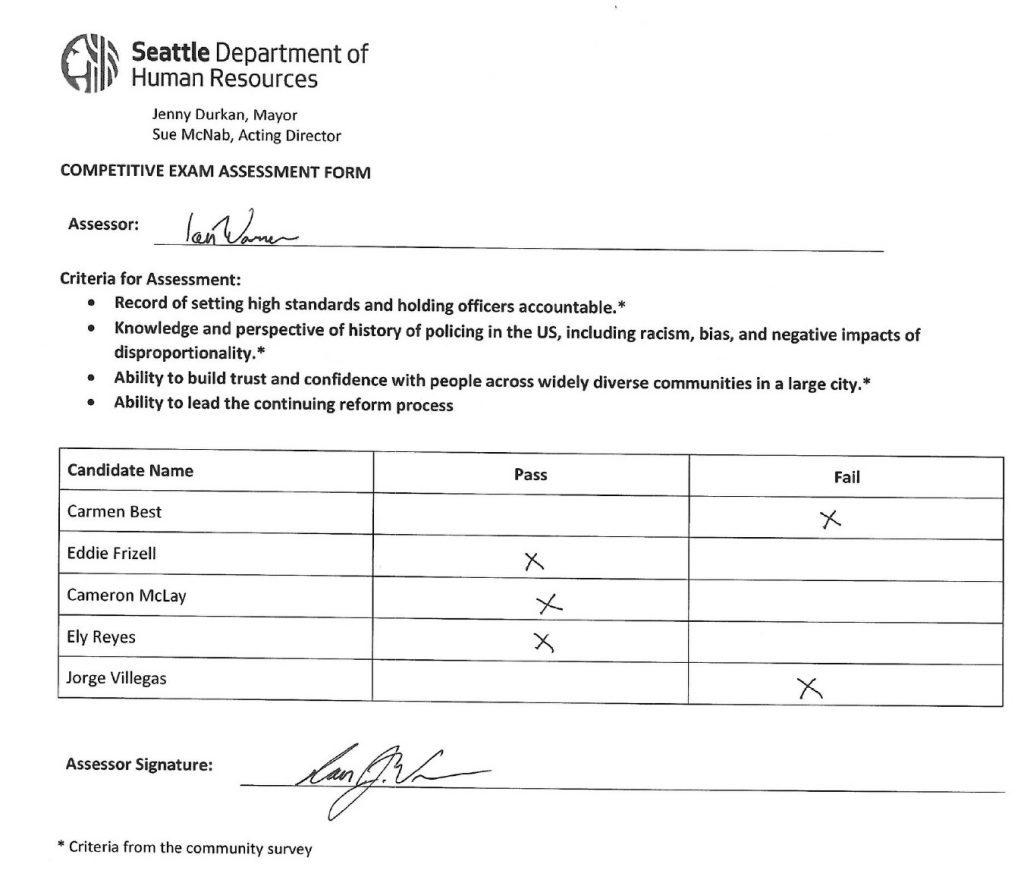 It will no doubt take the CPC several days to  process this new information, which addresses many but not all of the CPC’s record requests. As to Ruiz’s concern about the CPC having enough time to provide input to Durkan, it looks like the clock has not yet run out: the Mayor’s Office is still conducting its own site visits, and once that is complete and she has received reports, will she conduct final interviews with the three candidates in July and make her decision on whom to nominate.

In the meantime, the Mayor’s Office and the CPC are having a minor skirmish over CPC participation in the site visits organized by the Mayor’s Office. Colleen Echohawk, executive director of the Chief Seattle Club, a member of the CPC, and a co-chair of the search committee, is participating in the site visits. But Ruiz made it clear that she is not doing so as a representative of the CPC. While Durkan invited the CPC to have a representative on its site visit teams, the CPC declined; as it explains in a letter to Durkan yesterday, its policy is to choose its own representatives to participate on committees, and the Mayor’s Office made it clear that only its executive director, Fe Lopez, was invited to participate. As such, the CPC chose not to join on those terms and continues to run its own site visits.

This may seem like arguing over minor details, but to Ruiz it’s important that the CPC push back against slights and encroachments on its ability to be a fully independent, critical voice. “At this point in time, the CPC is still a relatively new oversight body. It was just made permanent last year. It’s relatively unique in the country. To me, it’s extremely important that we be independent, that we ask the tough questions, and we establish that precedent now. That means that some people in the government will be unhappy with some of the work that we’re doing. But that’s what we’ve all signed up to do.”