Two notable things happened today with regard to the proposed city-wide MHA “upzone” legislation: the city published the anticipated Final EIS addendum expanding on the historic resources analysis, and the City Council’s list of proposed amendments was released in advance of tomorrow’s MHA committee discussion.

The Final EIS addendum on historic resources came at the direction of the Hearing Examiner’s office, essentially the only fault he found with the Final EIS that needed to be addressed. Comments will be accepted until February 22, after which one assumes that the city will address any comments and issue a “final” final version.

The addendum incorporates information on landmarks and historical resources from other known (though incomplete) sources, and expands upon the analysis from the Final EIS. In particular, it notes: 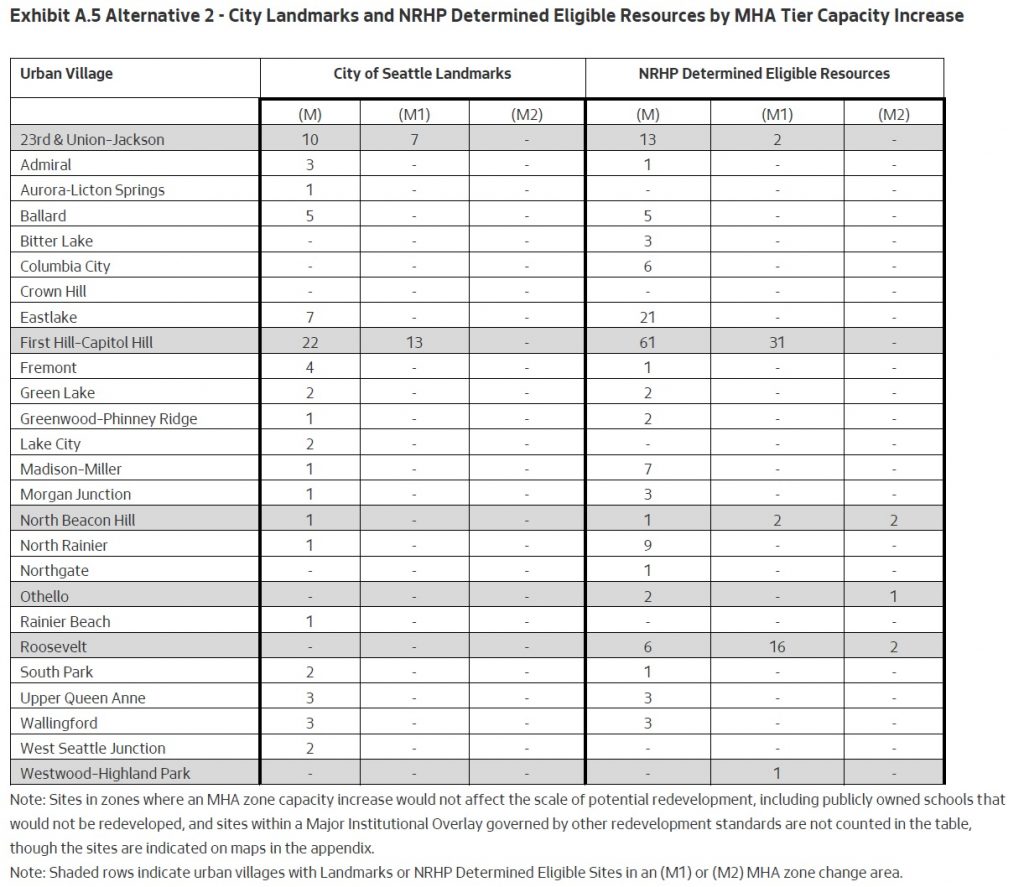 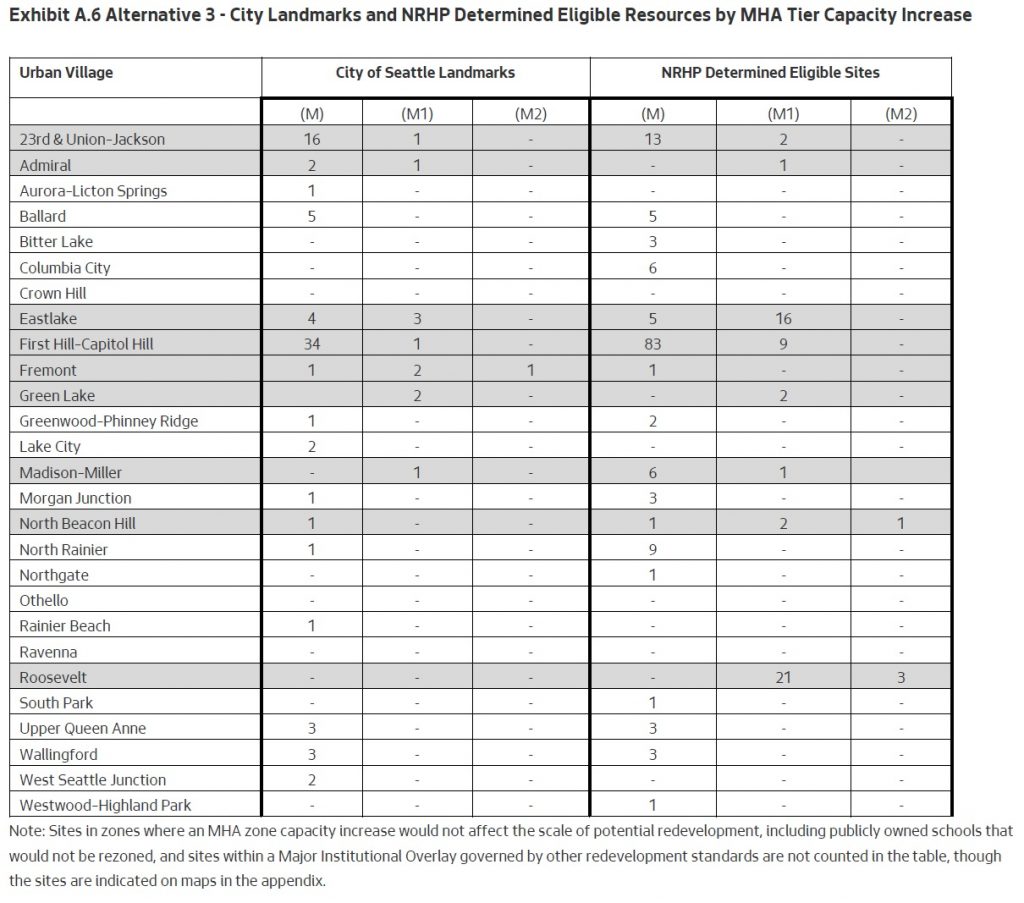 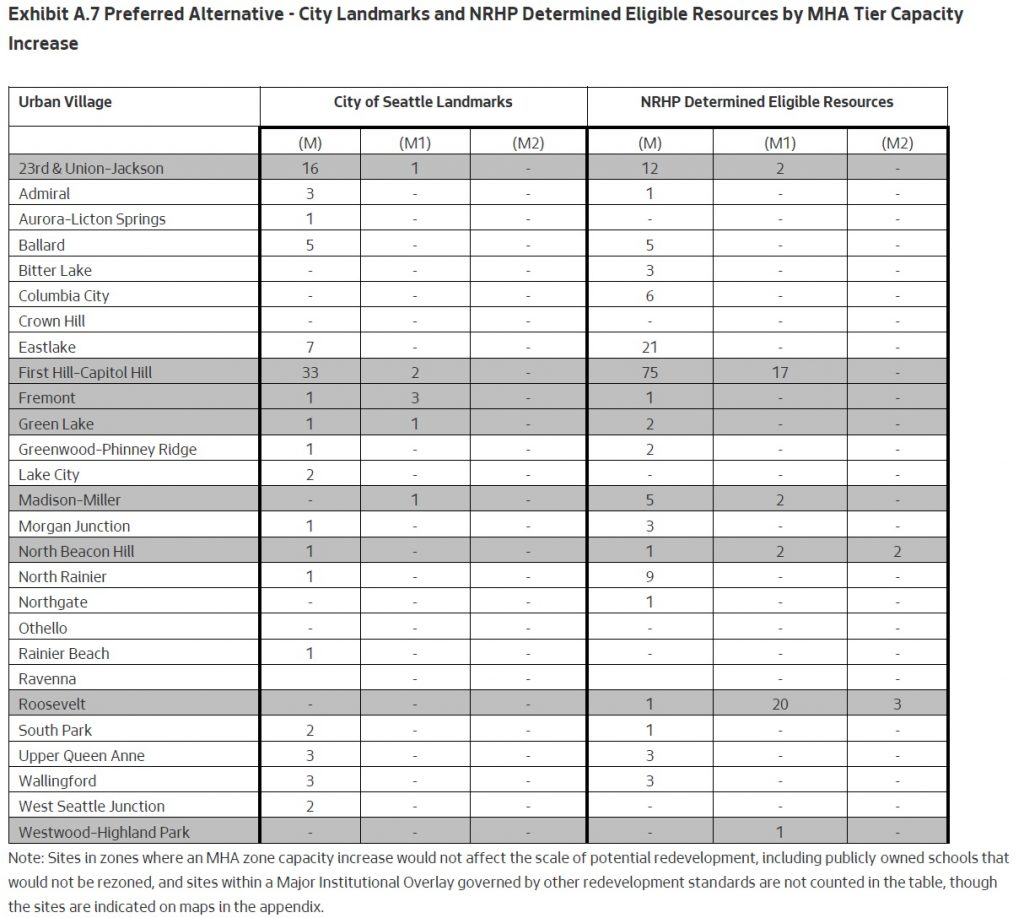 The list of amendments that the Council will begin discussing tomorrow (they won’t vote on them until later in the month, after a public hearing) is distilled down from a longer list of potential amendments reviewed last month. They are lovingly documented by Council Central Staff in this 179-page memo. They fall into two categories:  changes to the development standards attached to zones, and changes to the land use map itself to apply different zoning to specific lots.

Most of the proposed development standard changes are minor tweaks. A few more notable proposals:

The specific land-use map changes are broken out by Council district in the memo. As expected, much of what survived the distillation process were reductions, since most of the increases would have required additional Environmental Impact Statement study. Here are the district-by-district highlights (not an exhaustive list) of the proposed amendments:

District 1: reducing upzones in the West Seattle Junction and Morgan Junction Urban Villages. Council member Herbold has previously said that she is championing this because by May the Sound Transit 3 light-rail alignment through West Seattle will have been decided; that will give them the information they need to correctly upzone the lots surrounding the planned light-rail stations.

District 3: four increases: three from RSL to low-rise, and one from low-rise to mid-rise.

District 4: overall, a mix of increases and decreases. Reducing part of the upzones in the upper Wallingford Urban Village from low-rise to RSL. Removing the newly-created Ravenna-Cowen Historical District from the proposed expansion of the Roosevelt Urban Village, and don’t apply MHA zoning to the parts of the historical district that are already inside the urban village boundary.

District 6: Increase the upzone in the center of the Crown Hill Urban Village, and decrease it around the edges. Also, reduce the upzone near the Troll in Fremont.

As the memo notes, none of the individual changes will make a significant difference to the amount of affordable housing created through the MHA program, but if they all pass, it could cause a “moderate” reduction in the overall quantity. We should get a better sense tomorrow of how much enthusiasm there is for the changes. This process provides an interesting test of the district-based Council system, especially so in an election year as Council members try to balance their commitment to maximizing the amount of affordable housing built across the city against their responsiveness to their district’s constituents.

The Council members have also begun work on a companion resolution that captures other commitments they are making to ease community members’ concerns with the upzones; this is a practice they have followed with the previous MHA upzone ordinances as well. Some of the provisions of the resolution have become standard fare, such as a commitment to use in-lieu fees generated in a particular neighborhood to create affordable housing in the same neighborhood. Other interesting items under consideration (the full list is on pages 173-175 of the staff memo):

The action begins tomorrow (Friday) morning, at 9:30. Following tomorrow’s meeting there will be a public hearing on February 21st at 5:30pm, and then the committee meets again on February 25th to vote on amendments and potentially vote the ordinance out of committee. Committee chair Rob Johnson hopes to bring the final version of the ordinance up for final approval by the full City Council at its meeting on Monday, March 18th.