Following my January article documenting the extent to which the political organization Socialist Alternative directs the actions of Council member Kshama Sawant in her official capacity as a City Council member, two (substantially similar) ethics complaints were filed with the Seattle Ethics and Elections Commission: one by an anonymous District 3 voter, and one by District 3 Council candidate Logan Bowers.  This afternoon, SEEC Executive Director Wayne Barnett sent a letter to those parties (with copies to journalists, including myself) announcing that he is dismissing those complaints and explaining his reasoning.

The main allegations that he addresses from the complaints are that Sawant delegated decision-making authority to Socialist Alternative’s Seattle Executive Committee (SEC) for her vote on the confirmation of Carmen Best as Chief of Police, and the firing of two staff members from her office.

We interviewed Councilmember Sawant, and she told us that the SEC does not take votes on matters coming before the City Council. She told us she consults with the SEC, and said that she could not recall a single instance where she had taken an official action as a City Councilmember with which she disagreed because the SEC had directed her to do so. She noted that with the decision to dismiss the staff members, and the decision to confirm Chief Best, she had informed the SEC that she thought those were the proper decisions, and ultimately persuaded the SEC to side with her opinion.

Fundamentally, I believe that elected officials are free to structure their decision-making as they wish, subject to the will of the voters every four years. Campaigns are won and lost based on voters’ estimations of whose interests elected officials are serving and whose interests they are not. I do not find the way Councilmember Sawant makes her decisions to be a misuse of her position.

Barnett also addresses an allegation that Sawant accepted things of value in violation of the Ethics Code. He quotes the relevant section of the Code in his letter:

Barnett then notes the travel expenditures that Sawant has listed on her annual financial disclosure forms, totaling tens of thousands of dollars over several years, and that he discussed this with Sawant:

Finally, he addresses the issue of whether Sawant and her office withheld documents related to the firing of two staff members, in violation of the Public Records Act – or alternately the disclosure of confidential information. He notes that the Commission does not enforce the Public Records Act, and as for the potential disclosure of confidential information, that is purely conjecture without the actual documents in hand.

Barnett wraps up his letter by explaining the appeals process if either of the complainants choose to go that route. They will have 21 days to file an appeal, which would then be heard by the Commission at the “next meeting at which is may be practicable.” Its standard of review is whether the Executive Director had a “rational basis” for reaching his decision.

As you can imagine, I have thoughts on this.

First a preface: I’m a journalist, not an activist. As I have explained many times since I posted the original story in January, I did not go looking for this story. Rather, someone brought it to me, and in the face of substantial evidence of an ethically dubious relationship between Sawant and Socialist Alternative, I felt compelled to investigate for three months and ultimately publish what I found.  I’m also not an angry Sawant-basher, or a Socialist-basher; I agree with her on some issues, and disagree with her on others.  At the end of the day I believe it’s up to the voters of District 3 (which I am not one of) to decide how to deal with these issues with their elected representative. I will not be endorsing any District 3 candidate, nor campaigning for any, nor donating to any.

All that said, at this point it would be silly to argue that I’m just an uninvolved bystander — I’ve put a lot of time, effort and reputation into this story. So you shouldn’t take my word alone on any of this. Read the documents — including Barnett’s letter, attached in its complete form above. Talk to Sawant, other Socialist Alternative members you may know, and other stakeholders as you see fit. Ethics issues always have complexities and nuances, and this one is no different.

There are several problems with Barnett’s quick dismissal of the allegations in the complaints. Let’s take them in order.

Misuse of position.  Barnett says “she told us that the SEC does not take votes on matters coming before the City Council.” The most generous thing you can say about that statement by Sawant, assuming it is verbatim, is that it’s clever parsing. The allegation was made that the SEC decided how she voted on the Carmen Best confirmation, not that the decision came out of an SEC “vote” as the explicit mechanism. The SEC’s own letter following their decision makes it crystal-clear that they made the decision for Sawant. And to be clear, when they say “Understanding Our Vote” in the title of the letter, I take that to refer to Sawant’s vote, not the SEC’s  — nonetheless, the letter leaves no doubt that the SEC deliberated and then “met to take a final decision.” For Sawant to claim, through verbal gymnastics or otherwise, that the SEC did not make the decision is simply a lie.

Even more troubling is Barnett’s blanket statement, “Fundamentally, I believe that elected officials are free to structure their decision-making processes as they wish, subject to the will of the voters every four years.”  Both he and Sawant use that to justify the twisted notion that having a formal arrangement in which the SEC makes decisions on behalf of Sawant only raises an ethical issue the first time that Sawant disagrees with one of those decisions (and we only have the verbal statement of Sawant, the accused, in support of the notion that she has never disagreed with a single SEC decision).

Let’s change the names and see how this sounds. Suppose there was evidence that Donald Trump had agreed to allow Vladimir Putin to make decisions for him; would any of us argue that this isn’t an ethical problem as long as Trump agreed with all of Putin’s decisions?

Yes, elected officials need to have latitude in their decision-making processes. But there must be limits — and a clear limit is passing off the decision-making authority to a third party, which Sawant has admitted to doing both in documents and in her verbal statements. The SEEC’s own web site spells this out:

A Pledge to the People of Seattle

Seattle’s Ethics Code is a statement of our shared values — integrity, impartiality, independence, transparency. It is our pledge to the people of Seattle that our only allegiance is to them when we conduct City business.

The ethics violation happened when Sawant pledged accountability to Socialist Alternative and handed over decision-making authority — not at some future time when she finally has a falling out with the SEC and disagrees with them on an issue. Barnett’s interpretation of the Ethics Code in this instance can’t be the right reading, because if it is then it sets the bar so high for improper influence of an elected official as to render the Ethics Code toothless.

Financial conflict of interest/acceptance of things of value.  The travel payments is only half the story. Barnett omits the other half: Sawant’s husband, Calvin Priest, is a paid employee of Socialist Alternative. And unlike the travel payments that have been going on for some time, this is a fairly new arrangement first disclosed on her 2017 F-1 financial disclosure form. Priest has been an active volunteer with Socialist Alternative for years, and at times a paid staff member for Sawant’s campaign, but now as a paid employee of Socialist Alternative the organization is sending money directly into Sawant’s household. At this point it’s strange to even ask whether hiring Priest was done with the intent to “give or obtain special consideration or influence” since it’s well documented that Socialist Alternative already has all the special consideration and influence it needs: it controls her vote, her office, and her Council resources. Sawant and Priest indeed have a “special relationship” with Socialist Alternative, and both sides are benefiting handsomely from it. Again, if this doesn’t violate the Ethics Code, then the ethics code is useless — we would have to believe that if Sawant were to have a falling out with Socialist Alternative, there would be no effect on Priest’s ongoing paid role with the organization. That is difficult to believe given the amount of time that Priest spends organizing “the movement” of Sawant supporters to show up at rallies and public hearings to support her political and policy initiatives. His presence on the Socialist Alternative payroll further cements the strong influence the organization has over Sawant, and ensures that she has a strong incentive to continue to agree with the SEC’s decisions.

Confidential personnel documents. Barnett is right that he shouldn’t go on a fishing expedition, but in this case he doesn’t have to. Socialist Alternative’s own memos show that they have a “sensitive material” folder of documents related to the decision to fire a staff member from Sawant’s office — there is nothing hypothetical or conjectural about that. While Barnett shouldn’t ask “Can you provide evidence that you didn’t share confidential information with Socialist Alternative,” he can ask Sawant (and her chief of staff) specifically: “Have you read the documents in the “sensitive material” folder, and did you help to write any of them?” If she says no, the conversation is over. If she says yes to either question, then they by definition those are public records related to official city business and Barnett has an obligation to obtain the documents and see whether they contain confidential information, since by Socialist Alternative’s own description, they discuss employee performance and political retaliation. 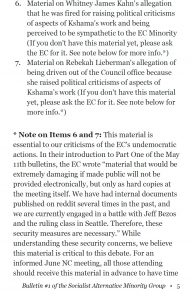 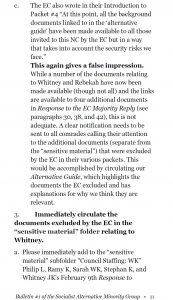 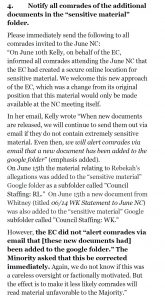 Final thought: this was pretty much exactly the ruling I expected the SEEC to come back with. Indeed, it has developed a reputation for weak enforcement and bending over backwards to find rationales to allow elected officials to do what they want to do. The extent to which Barnett simply trusts Sawant at her word in the face of hard evidence to the contrary undermines the credibility of his investigation.  And quite frankly, even if the SEEC did find a violation its enforcement abilities mainly limit it to a minor slap on the wrist. At the end of the day, it will always still be up to the voters of District 3 to decide who they want to represent them in this year’s elections, but it’s to Seattle’s detriment that the SEEC is so poor at shining sunlight on ethical lapses.