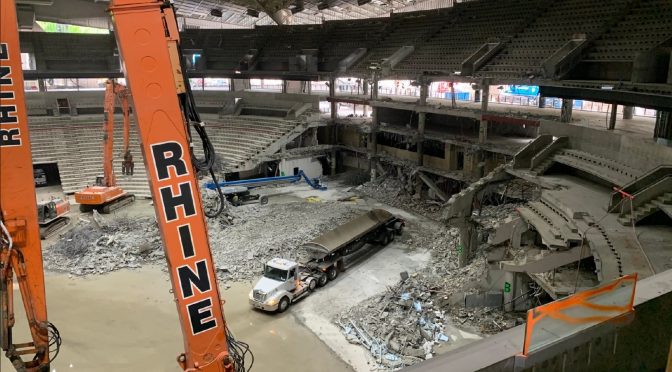 This morning, the City Council got an update on the Seattle Center Arena renovation project, as well as some reassurances from its consultant that the project’s finances are sound. It also considered a change to the city’s contract with the Seattle Storm to hopefully keep their games in Seattle while they are displaced from the Arena.

Representatives from OVG including NHL Seattle CEO Tod Leiweke, as well as the Council’s own staff, provided an update on the design of the new arena and shared some pictures of the ongoing demolition. Currently the construction team employs 120 people on site, who are busy gutting the interior in preparation for digging down an additional 15 feet. Between that and adding a new atrium on the south side of the building, OVG expects to nearly double the square footage of the facility. 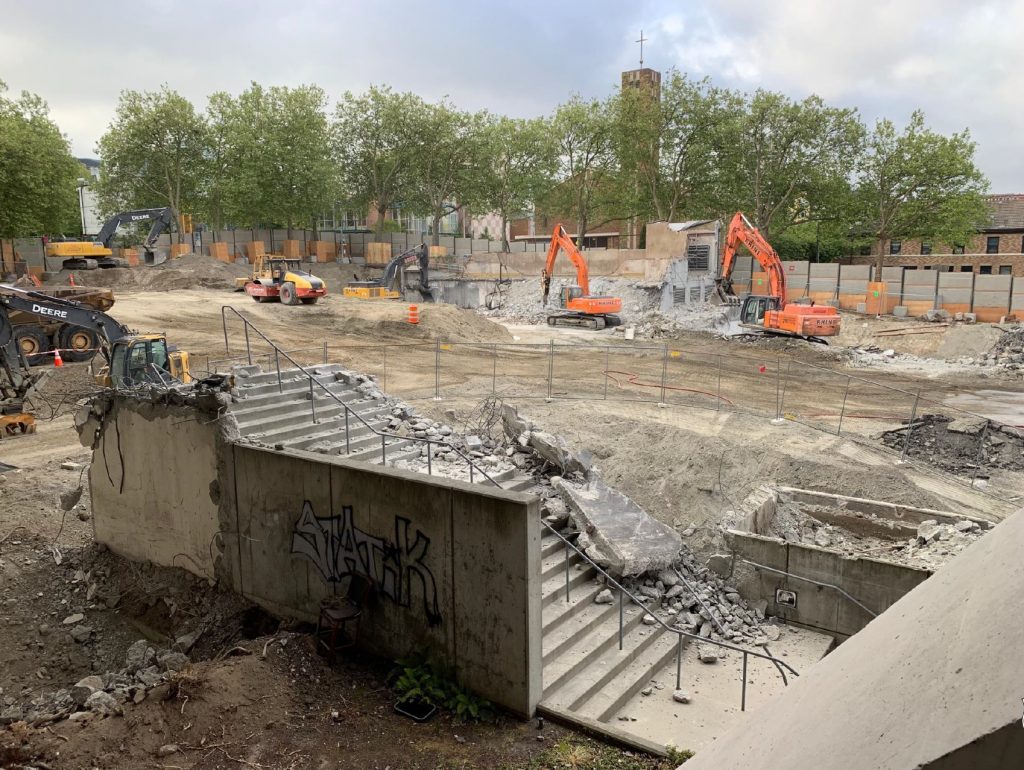 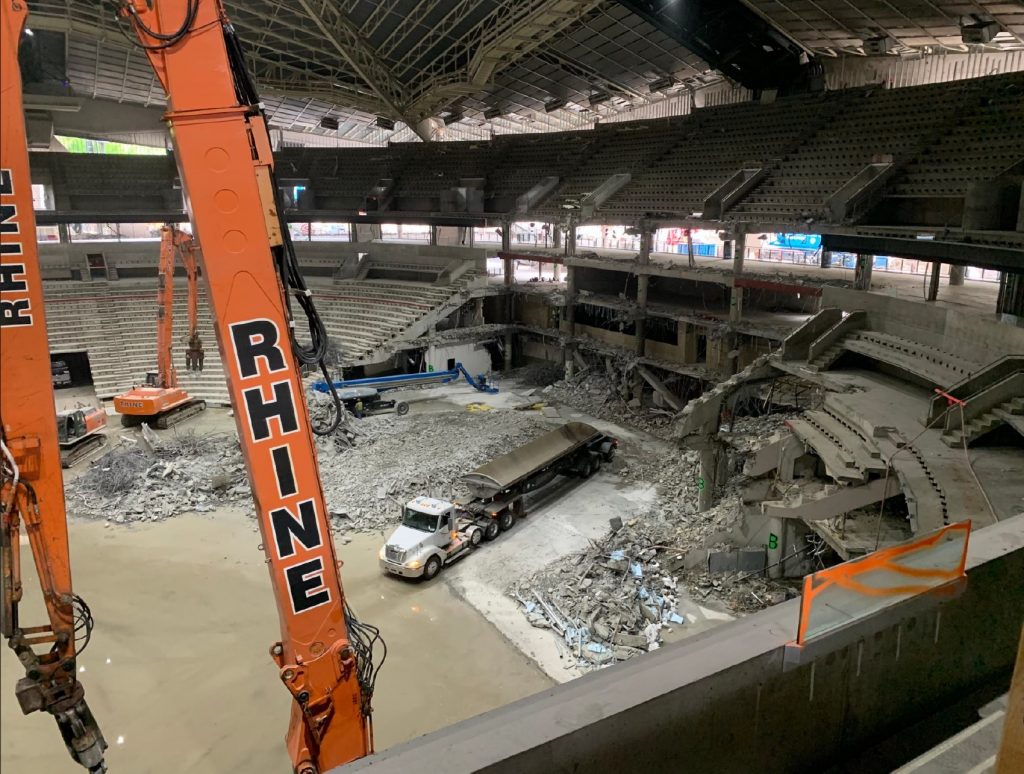 As part of the demolition, they are carefully removing all the glass window panels from the building, cataloging them, and storing them in a warehouse in Kent so that at the end of the project they can be re-installed. 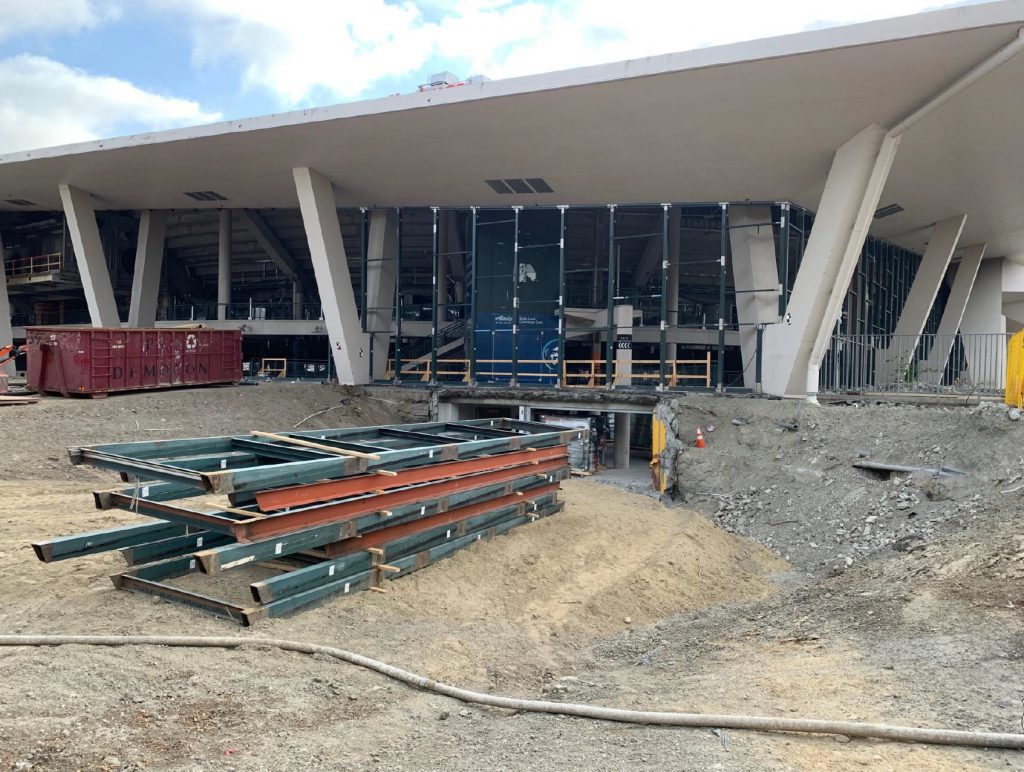 Leiweke confirmed that they still believe that once completed the Arena “will be one of the top concert venues in the world.” He also said that they remain committed to having an NBA team in the building in the future. 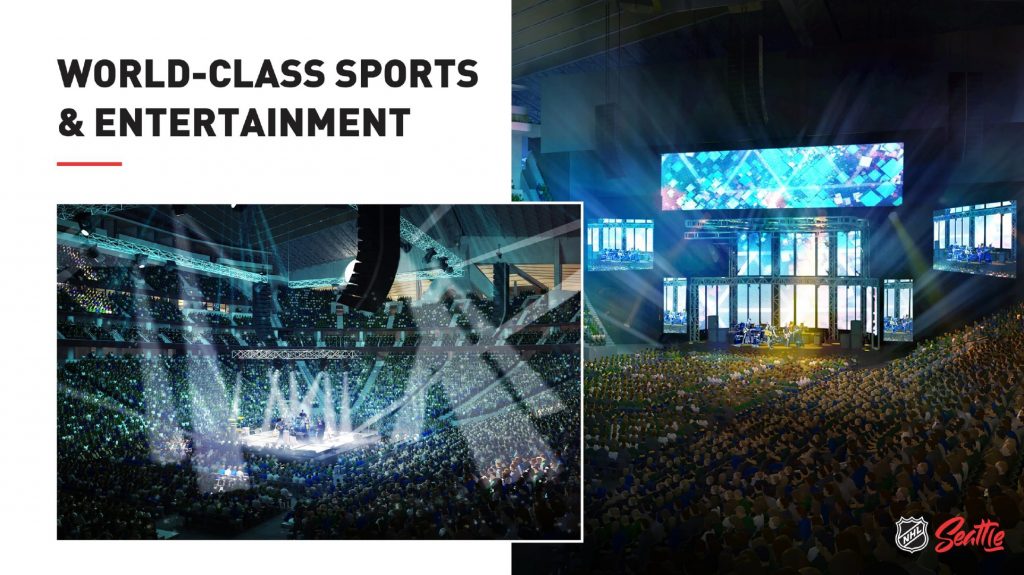 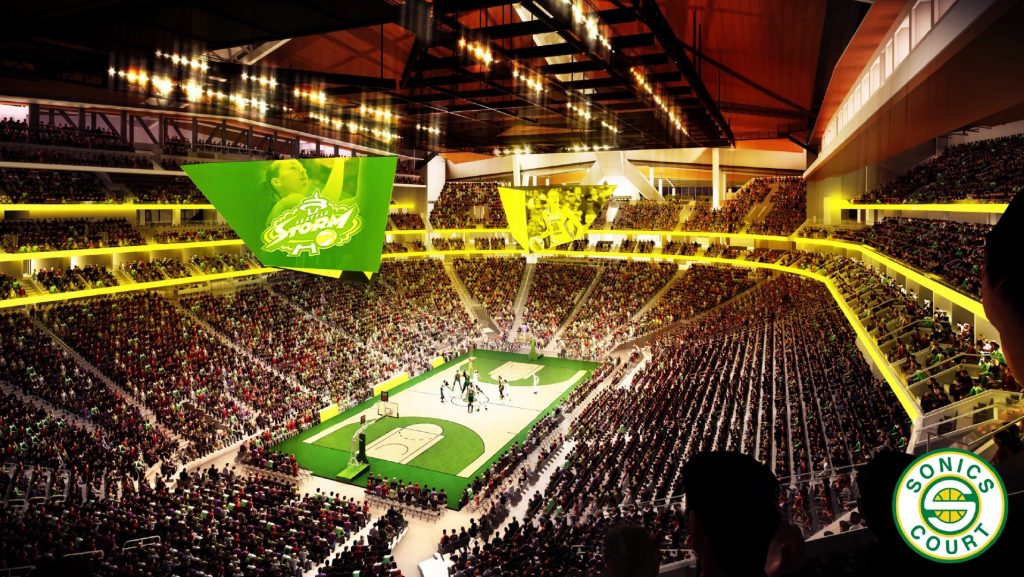 The cost of the arena project, originally around $600 million, has now risen to $900-930 million.  In addition, NHL Seattle has committed to building a training facility and public ice rink at Northgate Mall as part of the redevelopment of that site.

The Council also brought back in David Abrams, who was their independent financial consultant during the contract negotiations with OVG, to give an update on the project’s financial situation. Under the terms of the contract, OVG is responsible for all constructions costs, including overruns. Abrams confirmed that despite changes in the scope, size and cost of the project, OVG has secured sufficient funds to complete the project, and once the renovated arena is open for business OVG will be able to fund its debt service. OVG gave Abrams access to confidential materials in order for him to complete his analysis. However, the Northgate training facility is a separate project, and he has not seen the financials for that.

Council member O’Brien said in this morning’s meeting, “I feel like this is the moment where we are most exposed,” since with demolition underway the Arena is not operational, but if OVG suddenly were unable to complete the construction of the new arena then the city would be left with a useless shell. Abrams tried to provide his best reassurance that OVG has, in fact, secured the necessary financing and there is no reason to suspect that they will be unable to complete the project.

Gonzalez admitted that she was feeling “a little bit of anxiety” too, since the Council is responsible for oversight, but did not have direct access to OVG’s confidential financial information and needed to trust Abrams. “We get his conclusions, but we don’t get to see his math.”

This morning, City Budget Director Ben Noble also gave the Council a preview of legislation he expects to bring to the Council in the next few weeks that would make a minor modification to the city’s agreement with the Seattle Storm. The agreement, originally negotiated in 2017, covers the team’s long-term use of Key Arena for its games. At the time it was written, the city anticipated that a renovation might happen that would displace the team, and provided for the city paying the Storm up to $2.6 million per season for the costs and lost revenues associated with being displaced from the Arena and playing in another facility. That includes up to $2 million for lost revenues (including ticket sales, merchandise, and ad revenues), and up to $600 thousand for reimbursable costs.  Now that it has become a reality, the Storm is negotiating space in other facilities. Originally it was believed that it would play in Everett and Kent, but now it looks like the team will be able to play many of its games in “Hec-Ed” on the University of Washington campus. That’s double good news: it keeps the team playing in Seattle, which will help to preserve the fan base as well as hopefully increase revenues (or decrease the lost revenues from not being in the Arena). But there is also a downside: Hec-Ed isn’t air conditioned, because it largely isn’t used for major events during the summer months. The Storm and UW have apparently arranged to have air conditioning installed for the summer, but it will be costly. The net result: the terms of the agreement with the city don’t fit the model, since lost revenues will be lower, but costs will be higher. 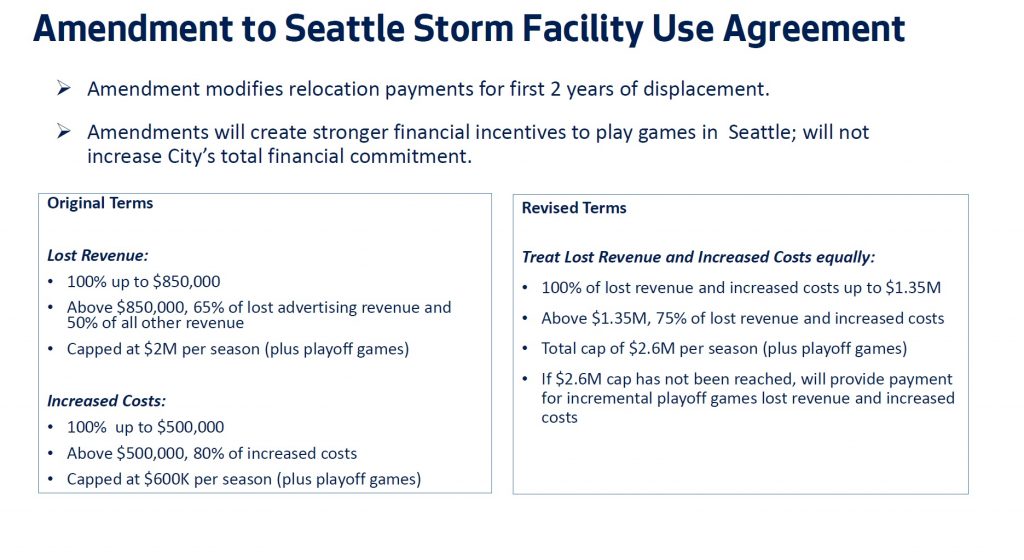 Thus the proposed amendment to the agreement, which maintains the $2.6 million annual cap, but no longer separately caps revenues and costs. Since the total worst-case cost to the city remains the same and the city believes it’s in its best interests to keep the Storm playing within Seattle city limits, it worked with the team to negotiate the amendment. According to Noble, the new terms have been agreed upon, the lawyers are writing it up, and it should be in front of the Council for its approval in the next few weeks.