This morning Geoff Wentlandt of the Office of Planning and Community Development let the Council know that it would be a while before it could implement the MHA program across the rest of the University District because it needed to complete a new environmental impact statement (EIS). 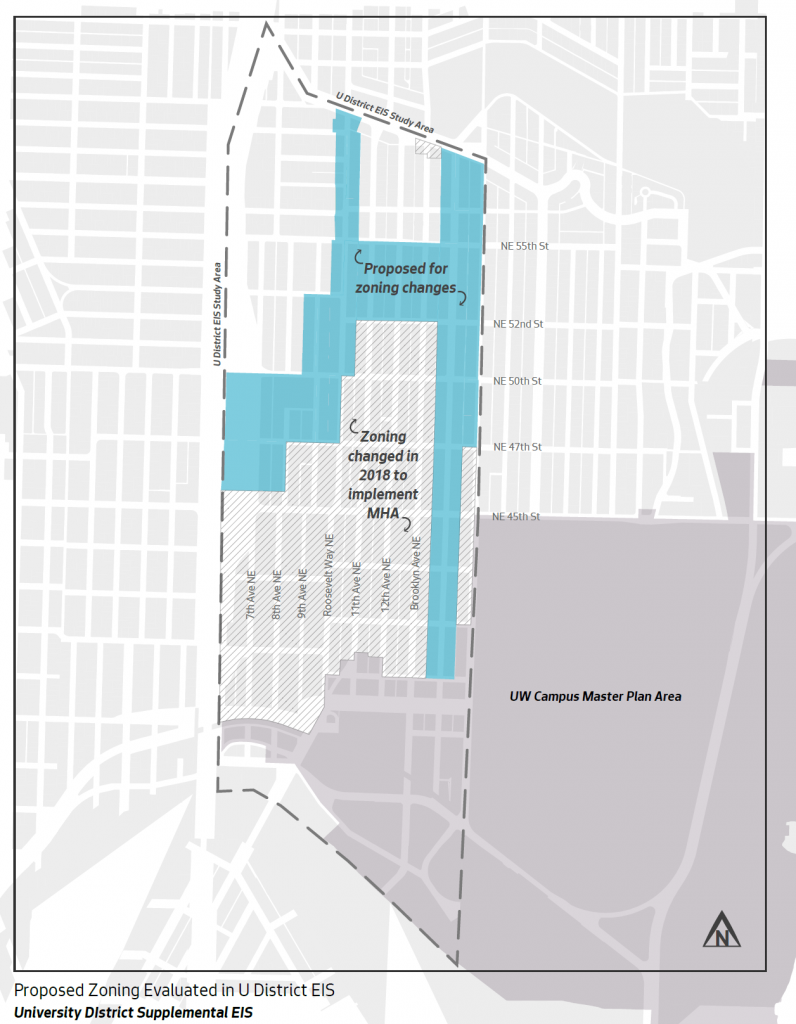 The U District was the first area of the city to be rezoned to implement MHA, back in 2017. At the time, however, businesses along “The Ave” objected, arguing that redevelopment would force them out, so The Ave and a handful of other blocks were carved out of the rezone area — with the intent to include them in the city-wide MHA legislation. However, earlier this year when the city-wide MHA came up for deliberations and vote, at the 11th hour the Ave was once again removed from the rezone area. At the time, it was explained that this was done to allow for the area merchants to complete their “small business vulnerability survey.”

Wentlandt gave a different explanation this morning. Apparently the current MHA proposal for that area is now different from what was originally evaluated in the 2015 EIS for the U District MHA implementation. In order to ensure that it survives a legal challenge, the city intends to issue a Supplemental EIS for those areas.

A Scoping Notice will be issued by OPCD on Thursday, and the public comment period will extend until June 21st with a meeting on Wednesday, June 12. The city expects to issue the draft EIS in late summer, followed by another public comment period, and then the issuance of a final EIS (FEIS) in the fall.

Alternatives expected to be considered in the supplemental EIS:

The supplemental EIS will also benefit from the EIS written for the recently-completed UW Campus Master Plan update, which has updated information on traffic/trip generation, demand for services, and growth projections.

Once the final EIS is published and any legal appeals are dealt with, the city can finally move forward with legislation. It’s very likely, however, that the final EIS will be challenged and result in another Hearing Examiner case running for several months. In this morning’s Council meeting public comment session, the usual suspects showed up once again to renew their objections to the MHA program in general, and were joined by a representative of the merchants along the Ave who complained that the city has not sufficiently worked with local businesses to address their displacement concerns, as laid out in a resolution passed along with the 2017 U District MHA upzone ordinance. In that resolution, the city committed to:

B. Bring the Community Affordability Consulting Team to work with businesses in the U District on issues such as the design of tenant spaces, feasibility analysis for building renovations and business plan development;

C. In consultation with local businesses, revise the U District Neighborhood Design Guidelines to support the creation of spaces on the Ave that are attractive to and functional for small locally-owned businesses;

F. Review the historic resources surveys for the U District and the analysis contained in the Final U District Urban Design Environmental Impact Statement, to determine whether to nominate an area as a historic district; and

G. Continue efforts with the Office of Economic Development to establish a Legacy Business preservation program for historically or culturally significant businesses.

When pressed by Council member Herbold this morning on whether the city had made progress on those commitments, Wentlandt admitted that “there is still work to be done,” but expressed his hope that part of the work could be done through the Supplemental EIS, and other parts in parallel with the EIS work. For her part, Herbold pushed for a written response from OPCD on exactly what work had been done to meet the commitments in the resolution.

Council members Pacheco and Mosqueda expressed their impatience with the delay in enacting MHA in the remaining areas of the Ave, and in the lack of a crisp timeline for the supplemental EIS. Wentlandt explained that he couldn’t give an exact date because technical issues might complicate the analysis, and because he doesn’t know how many public comments the city will receive on the draft EIS (the city is required to respond to all of them). Pacheco pushed for an accounting of exactly how many affordable housing units have been “lost” because of development projects moving ahead without MHA requirements attached.