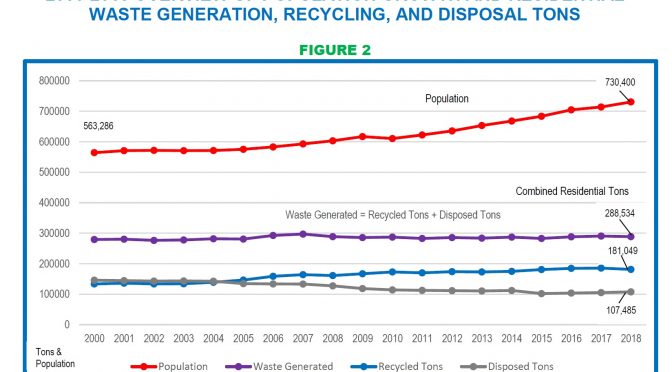 This morning, Council members Herbold, O’Brien and Sawant discussed with leaders of Seattle Public Utilities whether the city should switch to garbage pickup every other week, as was investigated in a pilot program in 2012. SPU and the Mayor think not; the three Council members, however, are championing the idea.

Of note: in this context, “recycling” is a more generalized term that includes recycled materials, reuse, and composting; it does not include “beneficial use” such as when construction materials are processed into fuels. For everything except construction and demolition, it represents everything that is diverted from landfills.

SPU is required to publish annual reports on the city’s progress toward these goals. The 2018 report was published last week, and it showed a slight tick down in the overall recycle rate, from 57% in 2017 to 56.5% last year. 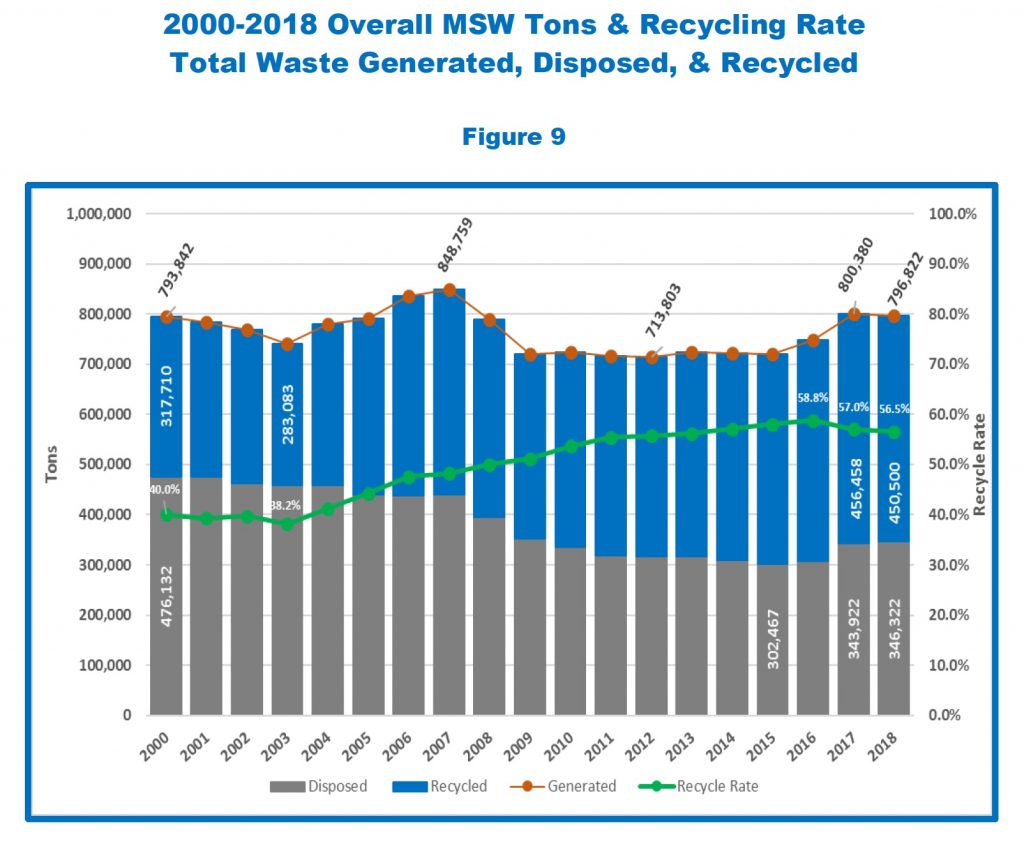 This is obviously concerning when put in the context of the 2022 goal of 70%; four years is not much time to move the needle over 13 points, especially when it seems to be moving in the wrong direction (or at the very least stalled). But digging into the details, we discover that things are more complicated, and there’s a fair amount to celebrate in the numbers.  For example, the amount that Seattle sends to landfills has declined overall in the past ten years, despite a significant increase in the population. 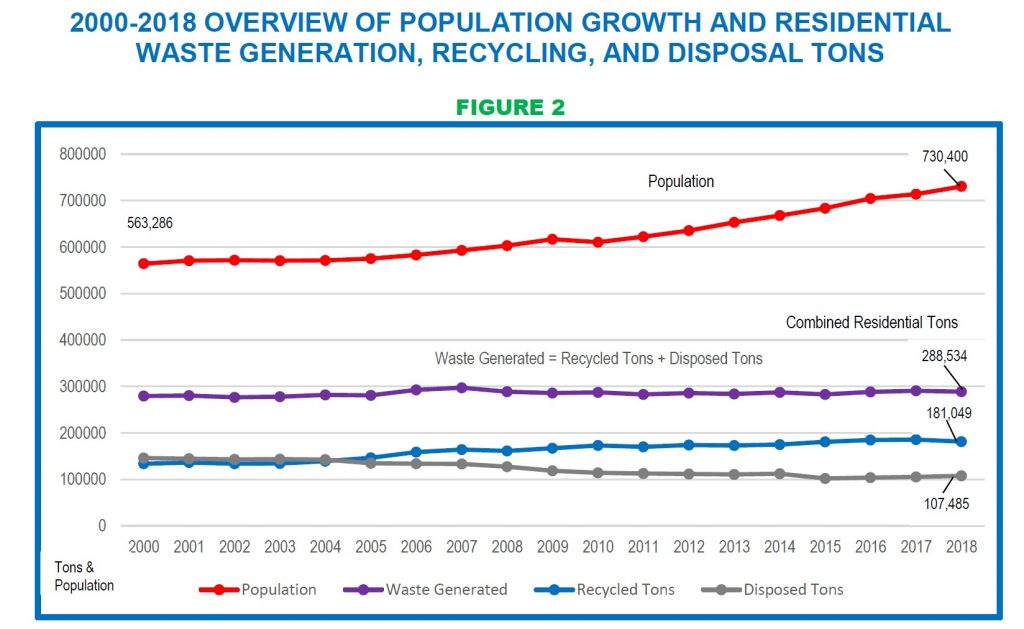 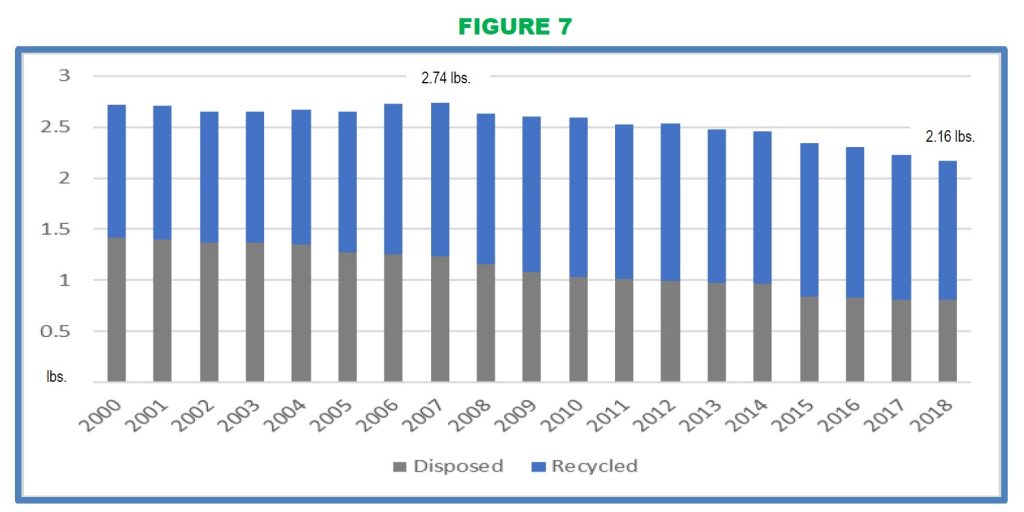 This starts to highlight for us some of the problems inherent in the way that the City Council has defined its recycling goals. For example, the city would move closer to its goal simply by increasing consumption of recycled materials, since the ratio of recycled to disposed would increase.

But here’s a more insidious problem: solid waste is measured by weight, not volume. Over the past decade, there has been a significant trend toward “light-weighting” packaging materials, with the result that the same volume of recycled and compostable materials now weighs far less. That has essentially moved the goalposts for meeting the city’s recycling goal: a ton of recycled materials today is a much larger volume than it was even just a few years ago. It’s entirely possible (and in fact likely) that Seattleites are recycling much more by volume than in past years, despite the trendline by weight moving in the opposite direction.

The report breaks out recycling performance by the five different sources: 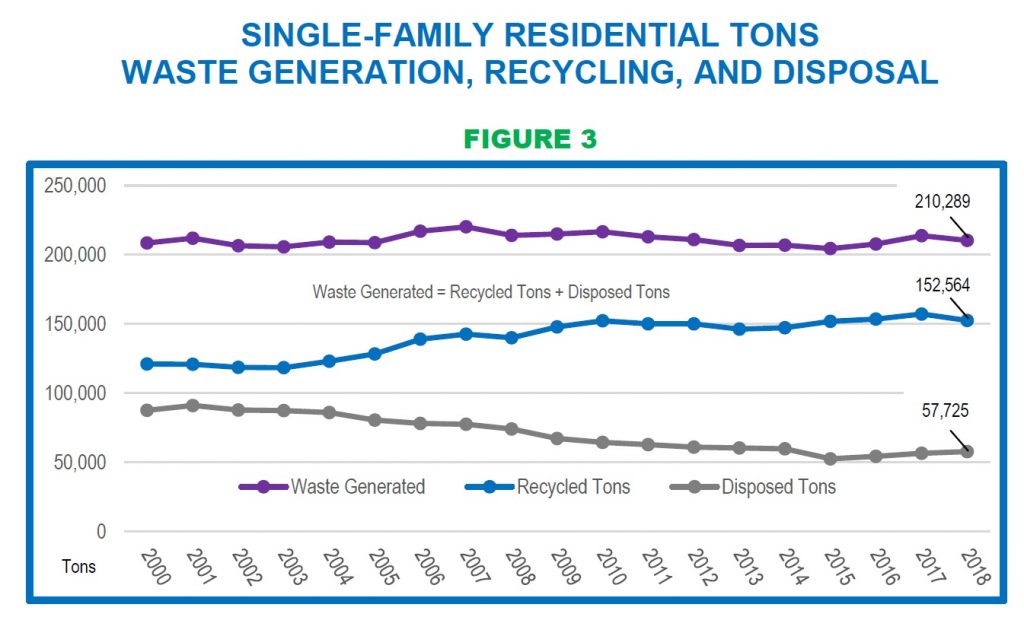 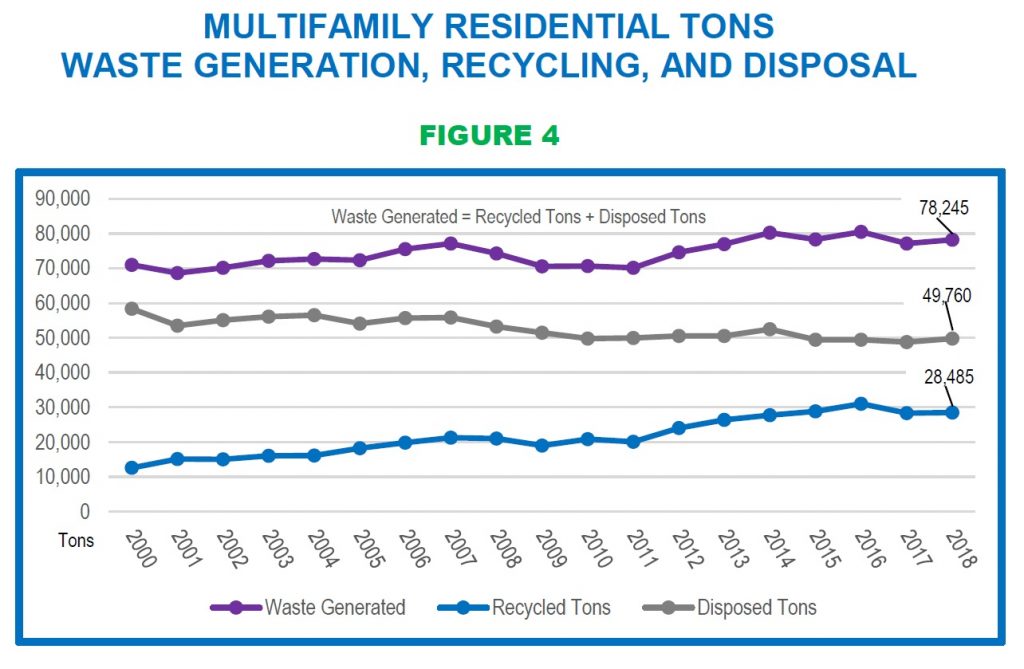 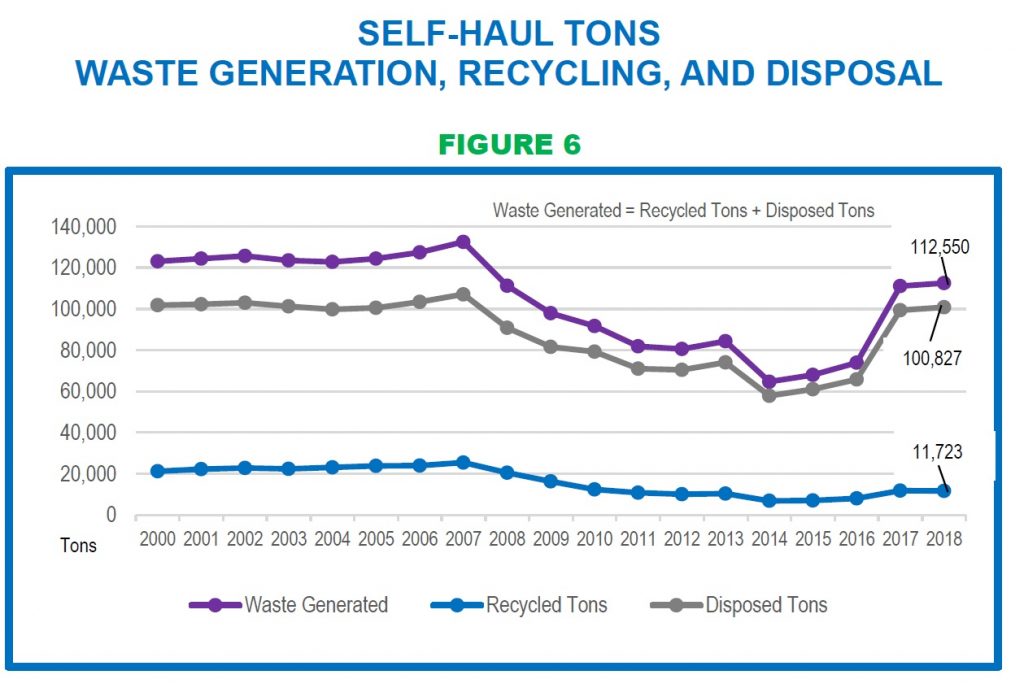 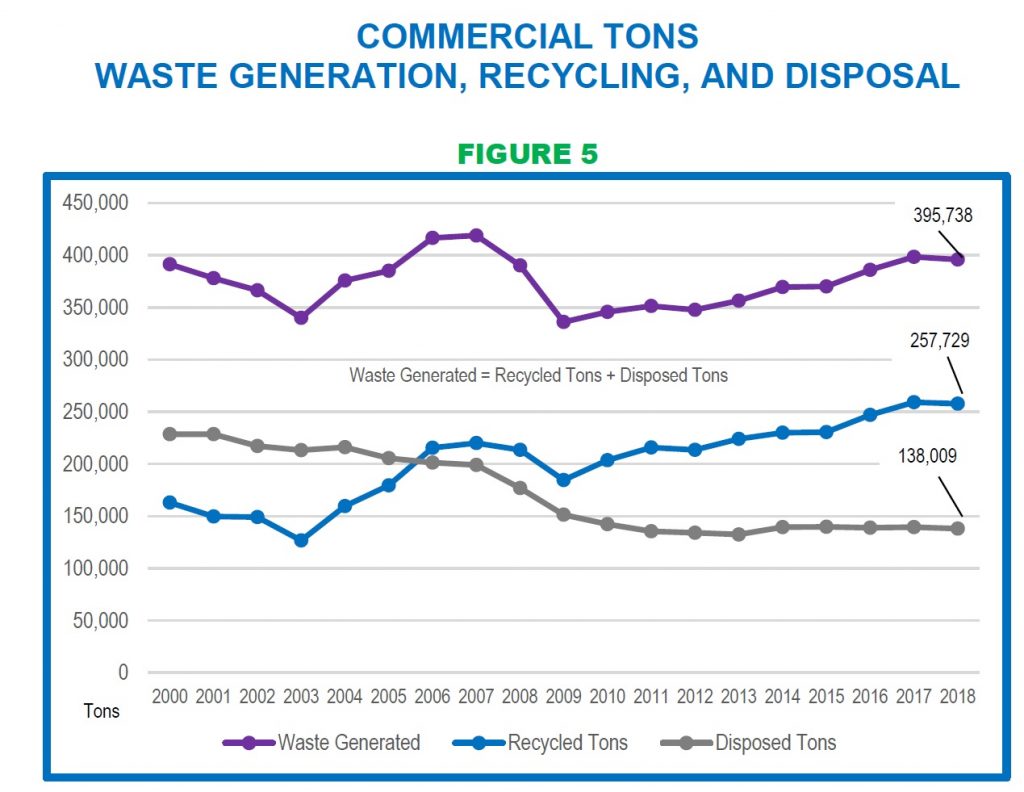 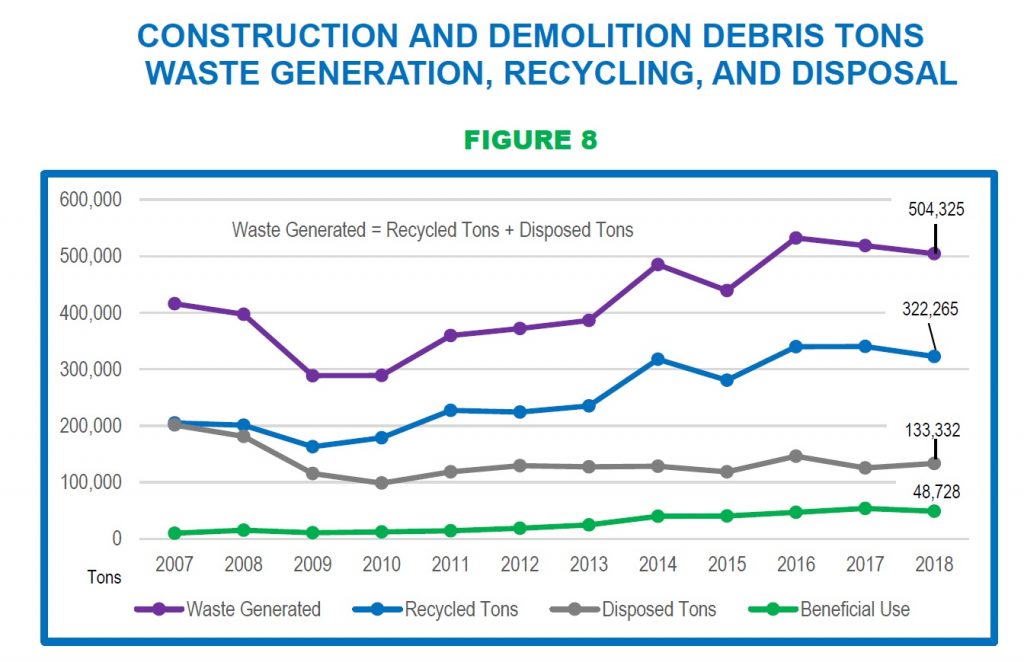 Each has their own story to tell:

The trend are interesting, but what these graphs alone don’t tell us is where we should be focusing our energies in trying go make further gains.  So I made some new graphs! 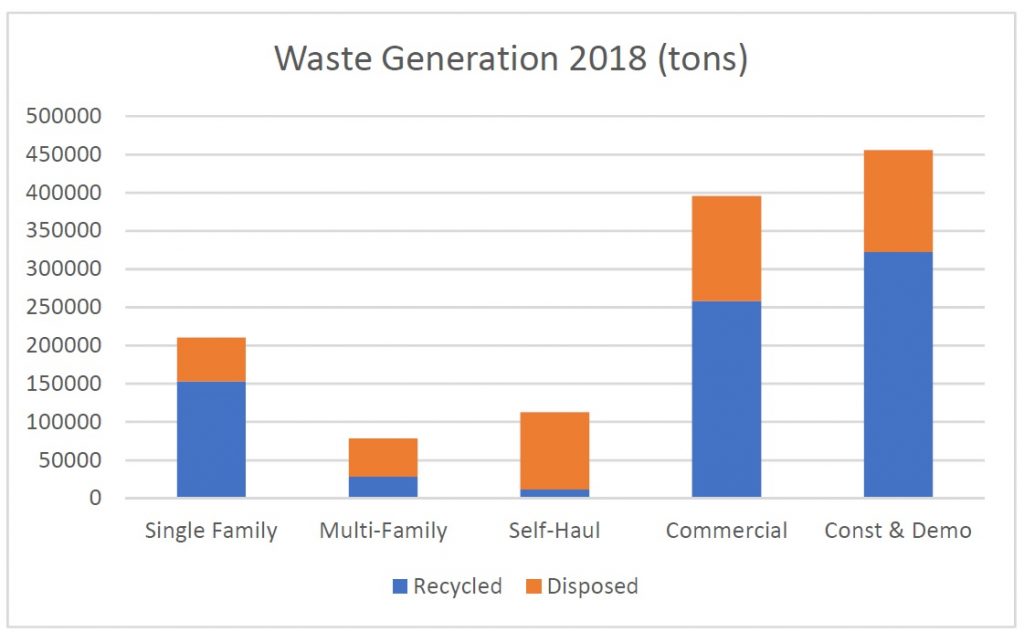 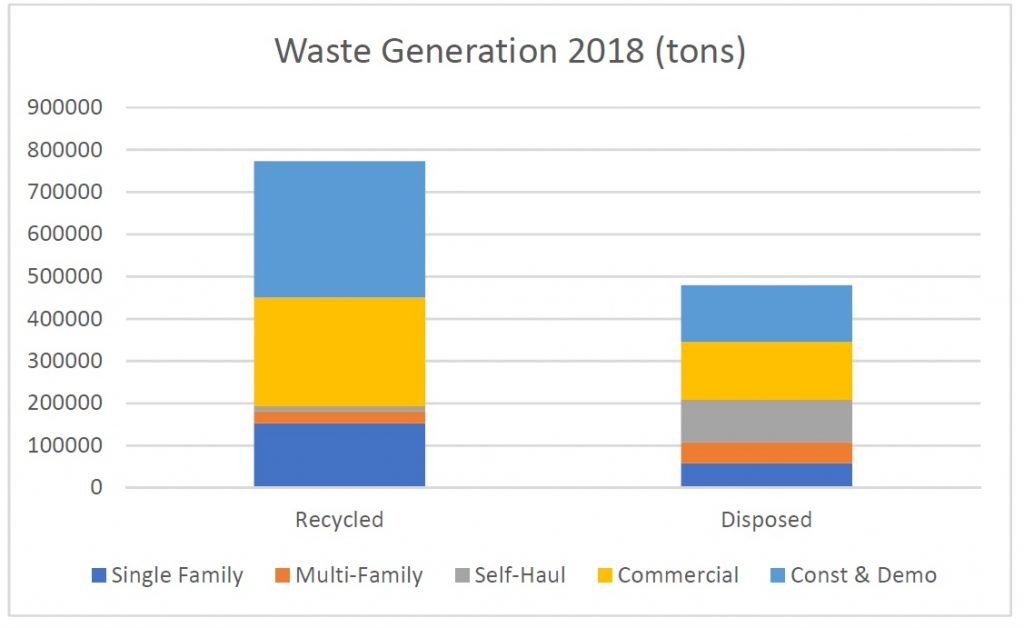 What this shows us is that single-family residential is not the best opportunity to improve Seattle’s overall landfill diversion rate — particularly if that source is nearing its point of diminishing return. There are still much larger opportunities in the other four sources. in fact, the city’s Solid Waste Advisory Committee, which reviewed the annual report, came to the same conclusion: it recommended that SPU and the city focus on multi-family, self-haul and construction & demolition (it’s unclear why they omitted commercial).

Nevertheless, Herbold, O’Brien and Sawant pushed hard this morning for the city to move forward with switching garbage collection to every other week — just for single-family residences (yard/food waste and recycling pickup would still be weekly).

This morning SPU officials gave an overview of the likely effects of a switch, and recapped the findings of their 2012 pilot, in which four neighborhoods were switched to every-other-week for six months, with surveys before, during and after the pilot program ran to gauge their feelings about every-other-week collection.

Their presentation on the likely effects focused on three aspects: the fleet benefits, the recycling benefits, and the financial benefits.

It’s worth pointing out up front that the only way the switch makes any sense at all is if it changes consumers’ behavior so that they generate less garbage to collect. If the total volume of garbage is unchanged after the switch, then SPU’s contractors still need to collect and haul away the same amount of garbage. A garbage truck will roll through a neighborhood half as often, but it would fill up twice as fast — and over time it would still make the same number of trips between the neighborhood and the landfill or transfer station. Since in total there would still be the same number of back-and-forth trips, SPU would still need about the same number of vehicles and employees to pick up all the garbage over a two-week period. There’s no cost savings, no fuel efficiency, no substantive emissions reduction — unless there’s less garbage to pick up.

But the predictions are that there will be reductions; if nothing else, all the obvious downsides of having garbage accumulate for two weeks — the smell, the attraction for pests, etc. — are strong incentives for people to reduce consumption and to better sort food waste and recyclables. The 2012 pilot showed that the amount of garbage did go down, and the amount of recyclable material went up (though food waste was hard to measure and didn’t seem to show much difference). 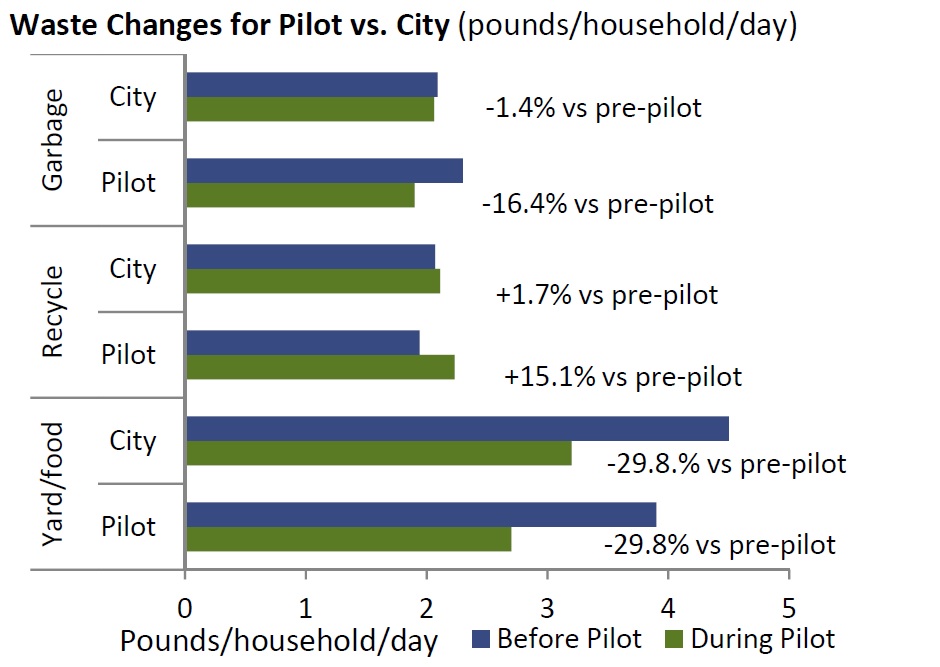 In 2012 the city predicted that switching to garbage collection every other week city-wide for single-family residences would divert an additional 9000 tons of solid waste. However, given that since the city switched to requiring food waste diversion in 2015, it estimates that the benefits today would be less. 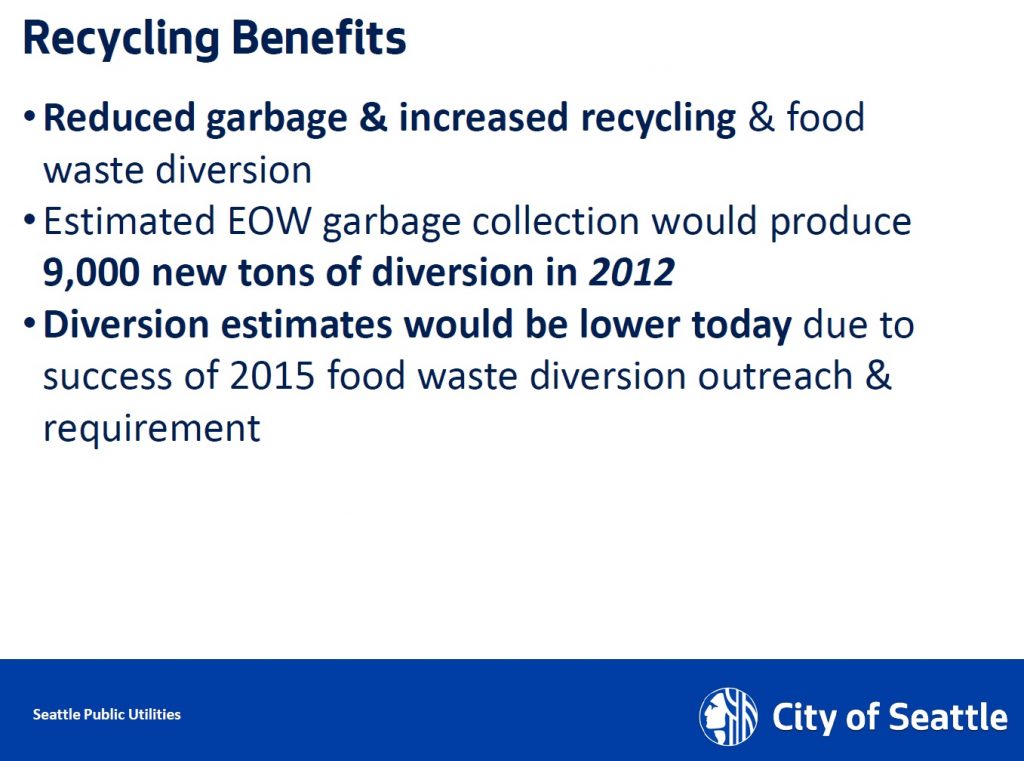 SPU predicts a 35% reduction in fleet and related emissions for the household garbage component of its solid-waste collection service — 15% for the solid-waste program as a whole (these numbers seem high, since the 2012 pilot only produced a 15% decrease in garbage, and today’s decrease would likely be smaller. But SPU didn’t show its math). Likewise, they predict a 25% reduction in truck traffic on neighborhood streets: half as many collection days, but more back-and-forth trips when collections do happen. Also of note: the latest contracts with SPU’s two solid-waste service providers already require phasing in of “greener” collection trucks that would reduce emissions. 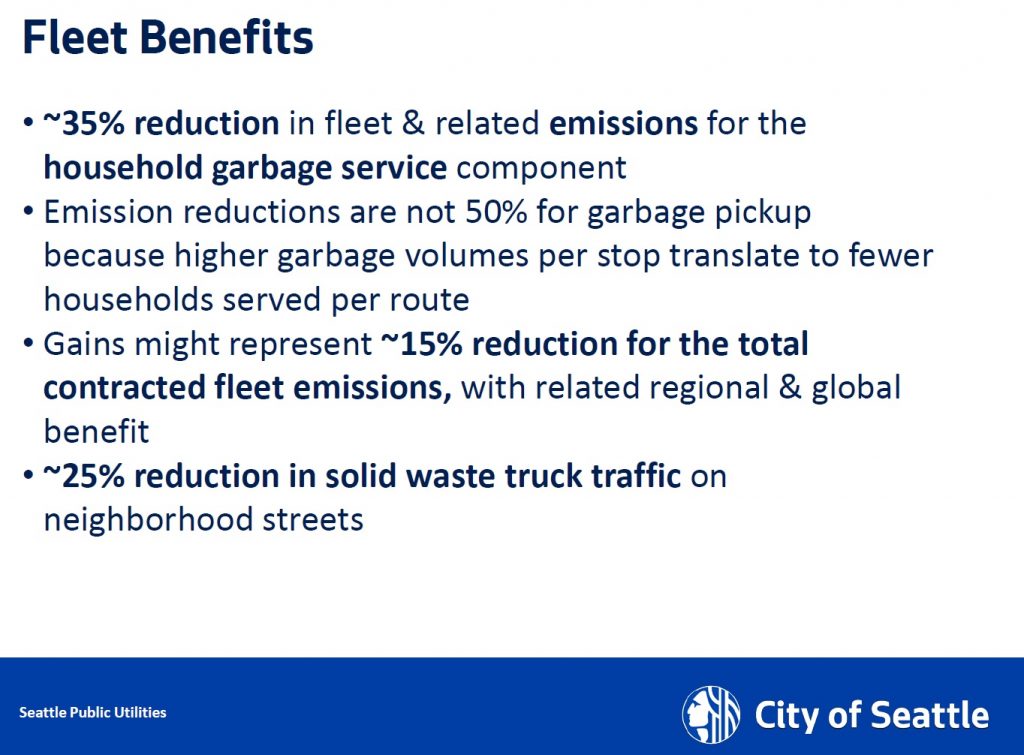 The financial impact is messy. Last year SPU signed new 10-year contracts with its two solid-waste providers, and there are no options in those contracts for shifting to city-wide every-other-week garbage collection — so a switch now would require re-negotiating those contracts. Also, those contracts were built to allow the contractors to spread the capital costs of updating its vehicle fleet, and that would need to be sorted out as well.  With those factors, as well as the overhead costs, SPU estimates that customers would see less than a 10% savings on their bill from a 50% reduction in service. That’s going to be a hard sell. 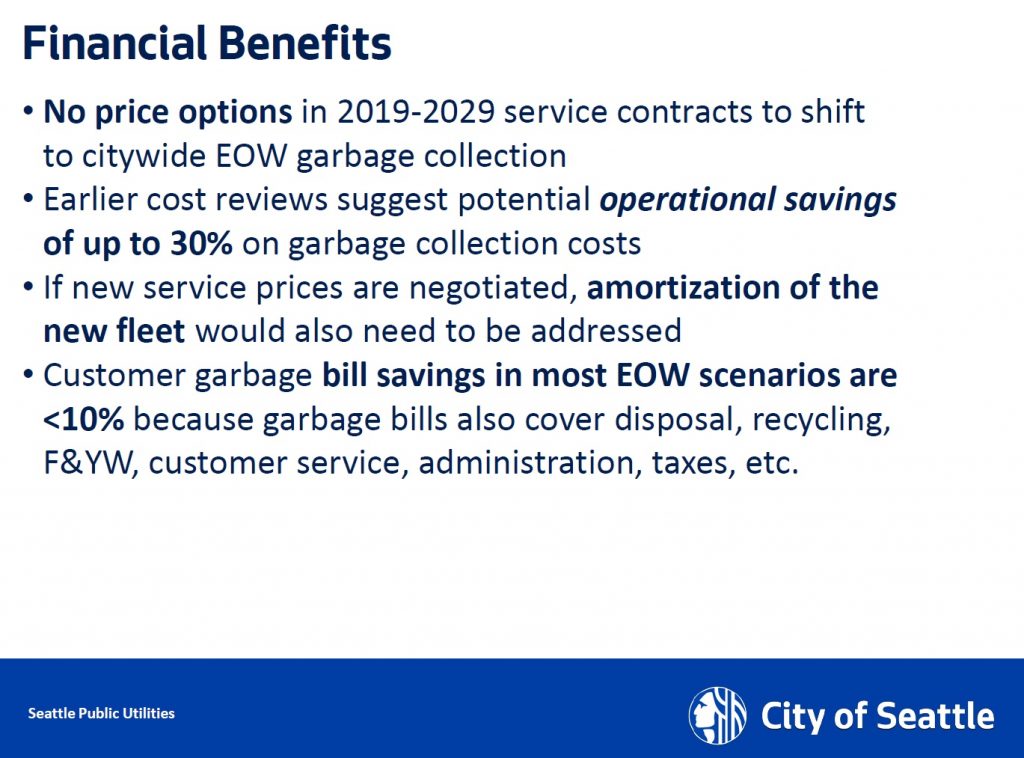 Looking back at the 2012 pilot, the survey had several interesting insights as to what participants thought of the change to every-other-week garbage pickup. Citywide, 53% of the pilot participants were in favor of citywide implementation at the end of the six-month period, but it wasn’t a uniform result: low-income neighborhoods were significantly less positive.

Households with babies in diapers were also more negative — as were people who run businesses out of their homes (including day-care facilities). 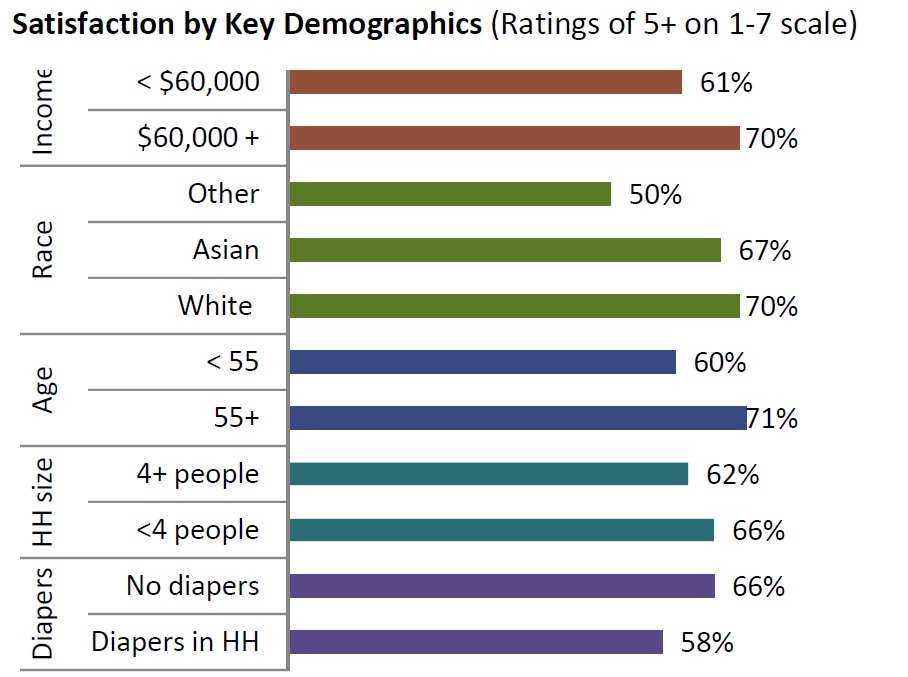 Satisfaction rate with the program grew among the participants over the course of the pilot, though (no surprise) at the end the participants who were satisfied were far more likely to approve of a city-wide rollout. 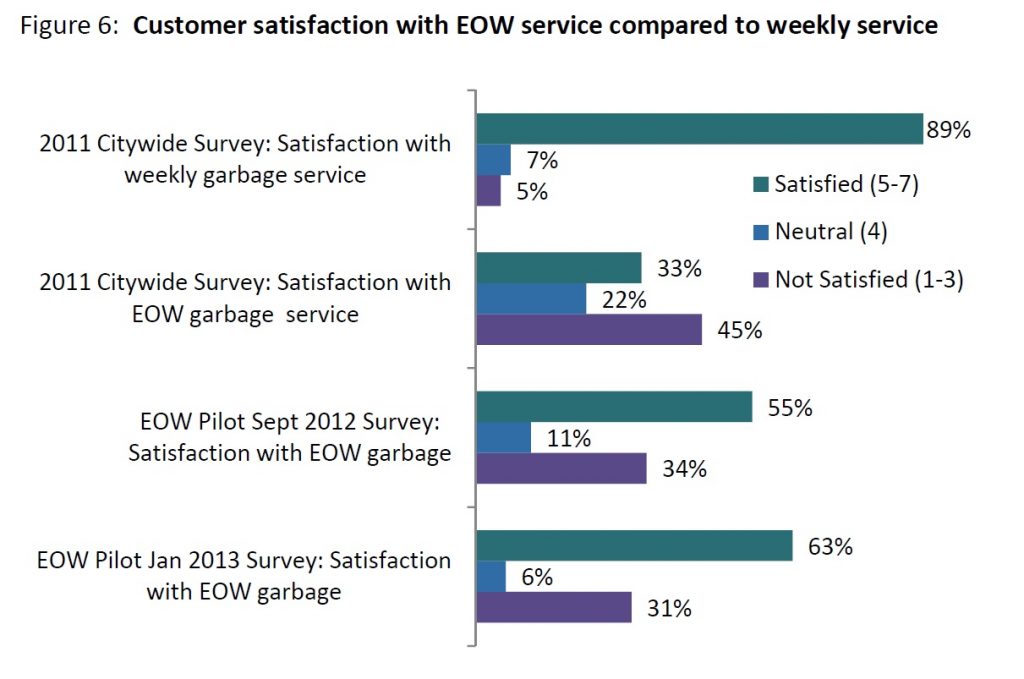 Among the people who were satisfied, there were several reasons specified. The most common was that they liked seeing the city find efficiencies and lower costs. The second most common was that participants were offered a $100 stipend in return for their participation in the pilot (which some used to upgrade their service to a larger garbage can).

The full report from the study raises concerns about disparate impacts from the switch on underserved communities.

This morning, just before the Council’s hearing, Mayor Durkan sent a letter to Herbold saying that while it was fine for SPU staff to present on the 2012 pilot, switching garbage collection to every other week was not an option that she was open to discussing at this time. She cited the previously raised concerns about disparate impacts and that there was no Racial Equity Toolkit analysis of the impacts of the program as one of the factors in why she won’t consider it.

Durkan also notes that “the potential cost savings of going to Every-Other-Week Garbage Collection are not commensurate with the level of service reduction.”

Herbold, O’Brien and Sawant expressed their frustration this morning with the Mayor’s refusal to consider the switch. Herbold noted that part of her frustration stemmed from seeing other jurisdictions implementing the switch to every-other week, including Portland. She observed that the decision not to go forward after the 2012 study was ” a customer service decision backed up by a customer satisfaction survey,” and said that she believed Seattle residents’ views have changed since then and would be more open to it.

For his part, O’Brien noted that a narrow majority of the pilot participants approved of it, but argued that the race and social justice concerns shouldn’t stop the city from at least doing another pilot. He also hammered on the need to address whether the city was on track to meet its 2022 recycling goals:

“Let’s start a mandatory pilot in the wealthiest, whitest neighborhoods in Seattle first, if that’s our concern. Let’s see how that rolls out, and let’s see what we learn. And let’s work on, you know, if diapers are the issue, what are the type of odor-sealing bags that we can offer to everybody with diapers in the household. There are things we can do to address those concerns. It takes a little bit of work, and as I said it takes some political leadership to do that, but let’s do that. And so, I don’t know that the Council is positioned to come up with the specifics, you guys hold the expertise, and so I think how we can ask the Mayor to support the department in coming back to us in the next month or two and saying ‘here’s a roadmap for how we think we can get to, here are the things we think we would need to do if we want to hit our 2022 goals I the next few years, and it’s going to be ambitious and require more resources, here’s what we’re going to have to do.’ But let’s at least have an honest discussion with the public on what the options are before us and as a community are we ready to kind of live up to the goals we set a few years ago or are saying no, we are going to give up on those and adjust our goals, and be clear about what changes are going to happen.”

Which brings us back around to a hard look at the goals: not only whether they are achievable, but whether they are the right ones. It’s easy to argue that focusing only on the percentage diverted from landfills is incorrect: the metric is only one part of the bigger picture of Seattle’s solid waste generation and it fails to incent overall reductions. It’s also inaccurate because it is based on weight and thus misses the larger “light-weighting” trend in packaging materials. Seattle would be much better off if the City Council, SPU and the Mayor took a step back and gave some thought to a new set of goals that meaningfully captures the kinds of changes we need to make to the stream of solid waste we generate here — and then took action to make progress on them.