This morning, Mayor Jenny Durkan rolled out her proposal for the city’s budget for 2020. With total planned expenditures of $6.479 billion, the budget represents an 8.5% increase ($509 million) over 2019.

The Mayor’s Office has been trickling out announcements of budget initiatives over the last two weeks, but today they rolled it all up into one big proposal with a few new additions. 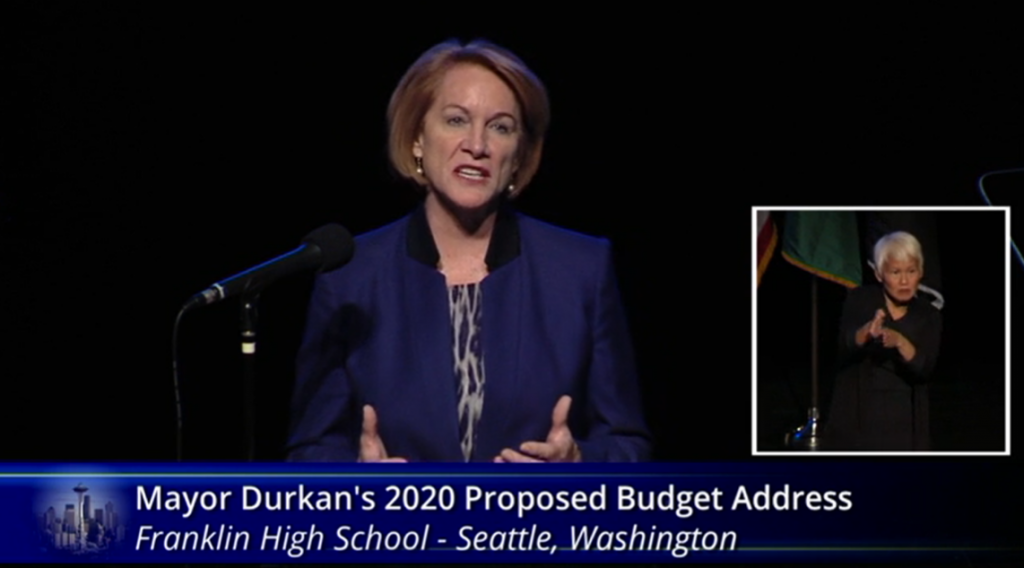 In a speech at Franklin High School, Durkan laid out her five priorities for 2020:

Most of the revenues into the city are restricted in their use, while  the money that our elected officials can actually make decisions about resides in the unrestricted “general fund.” The 2020 general fund revenues are expected to grow about $71 million (5.13%) to $1.469 billion. That includes the portion of the Mercer Megablock sale proceeds that are unrestricted (and a one-time windfall). 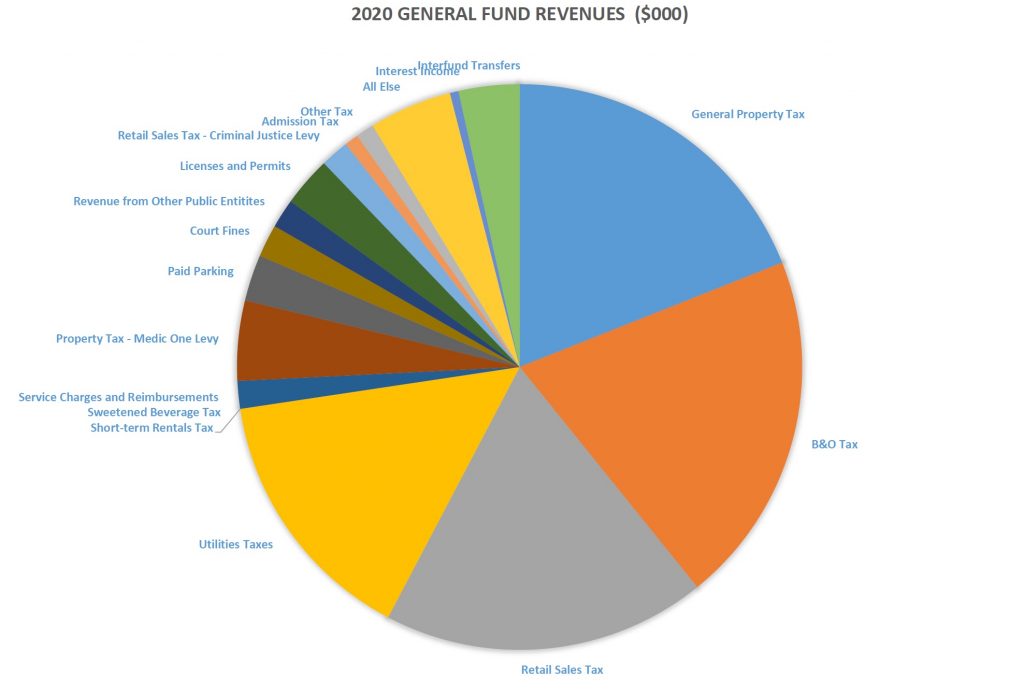 And as you can see in the chart below, those four have been the major, steady source of revenue growth for the city over the past five years. Nearly everything else is rounding errors. The lone green spike to the right is the Mercer Megablock sale proceeds. That’s really the only thing that stands out as different this year; the rest of the general fund revenues are in line with the recent past. 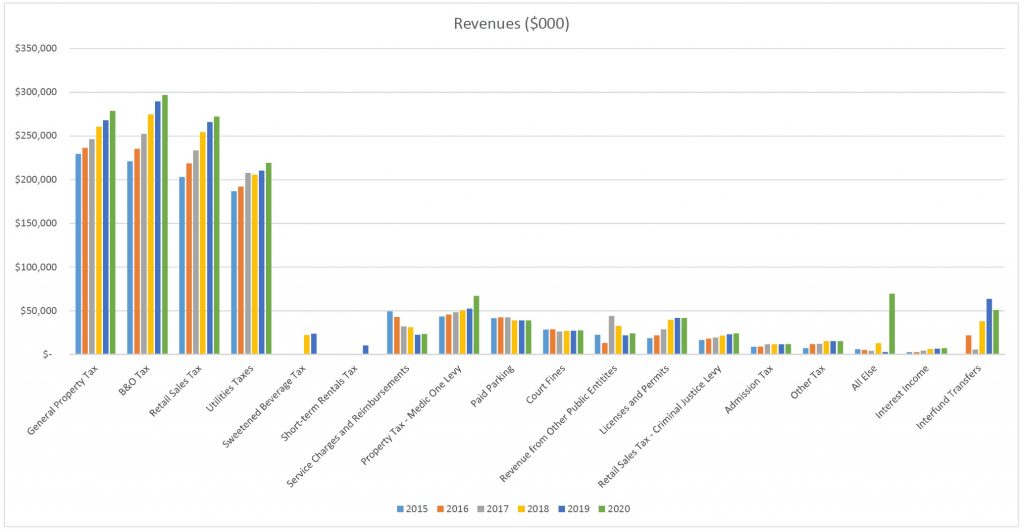 On the expense side, nearly 86% of the money ($5.56 billion) is being spent in the largest ten of the city’s 40 or so departments (down just slightly from 88% last year). That includes the city’s two behemoth public utilities, Seattle City Light and Seattle Public Utilities. It also includes the “Personnel Compensation Trust,” an amalgamation of the city’s expenditures on employee healthcare, life insurance, and other benefits. 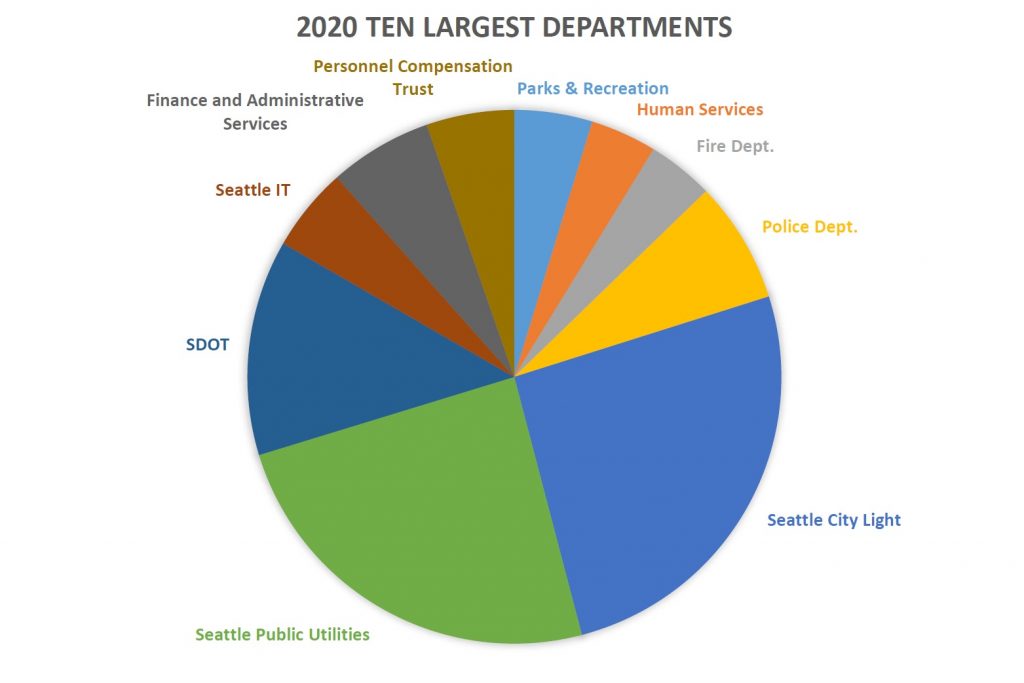 Several departments are budgeted for continued steady growth in expenditures, but two pop out: Seattle Public Utilities, and SDOT. 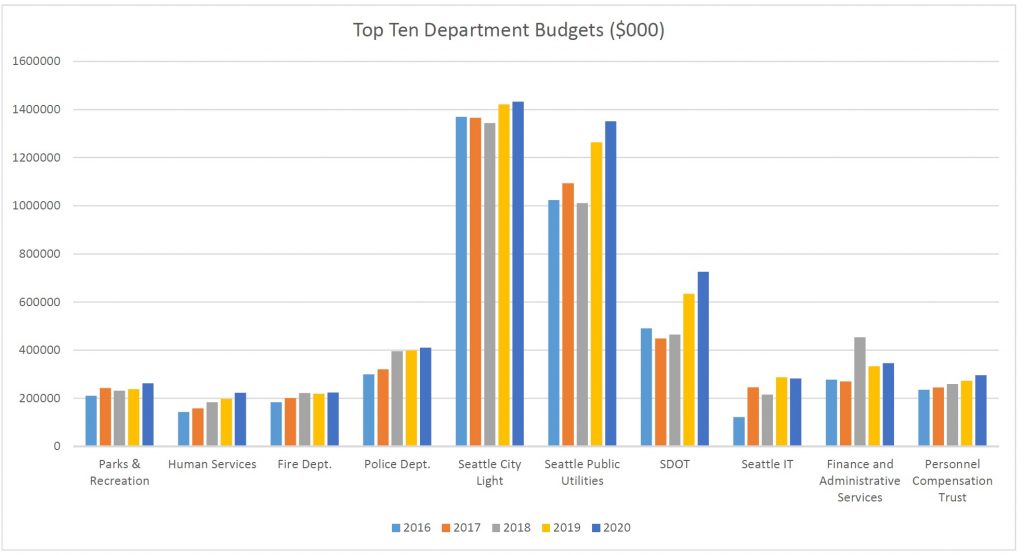 Seattle Public Utilities’ increase is mainly due to the ongoing Ship Canal Water Quality Project capital expense, which is now deep into the construction phase. It’s worth noting, however, that the 2020 increase over 2019 is about $45 million less than what was projected in last year’s endorsed budget.

SDOT is a different story. It’s proposed for a total budget of nearly $700 million, a $92 million increase from 2019 and $28 million more than the figure in the 2020 endorsed budget last year. There’s a long, complicated list of changes, both up and down, which you can read about here (page 408). Later this week we will undoubtedly see a presentation to the Council drilling into the details.

Finance and Administrative Services is often a holding area as departmental functions are reorganized, so its budget tends to be volatile — and we see that in the above chart.

The Seattle Police Department’s budget has remained flat over the last two years as it has struggled with hiring and retention. It has launched several new initiatives (and will continue to do so in 2020 under the Mayor’s plan), but they tend to be paid for by repurposing the underspend in wages.

Some notes and initial take-aways:

On Wednesday, the Budget Committee holds its first meeting, which will likely start with a revenue presentation from the City budget Office. And don’t expect that to be a happy, optimistic presentation: as the reveue overview in the proposed budget details, the prospects for 2020 and beyond are decidedly mixed as the threat of a recession looms.  More later this week, but here’s a quick sneak peek: 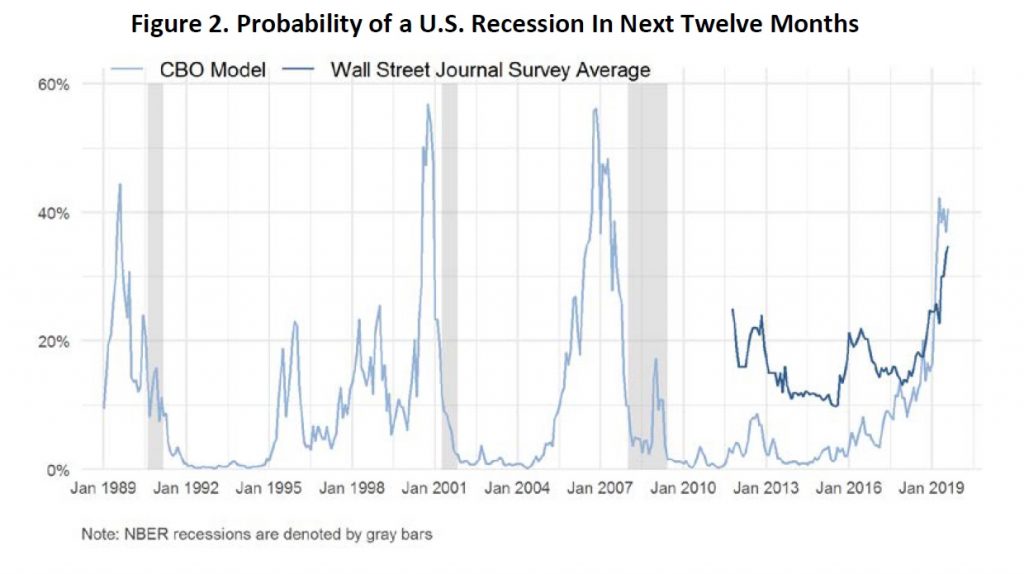 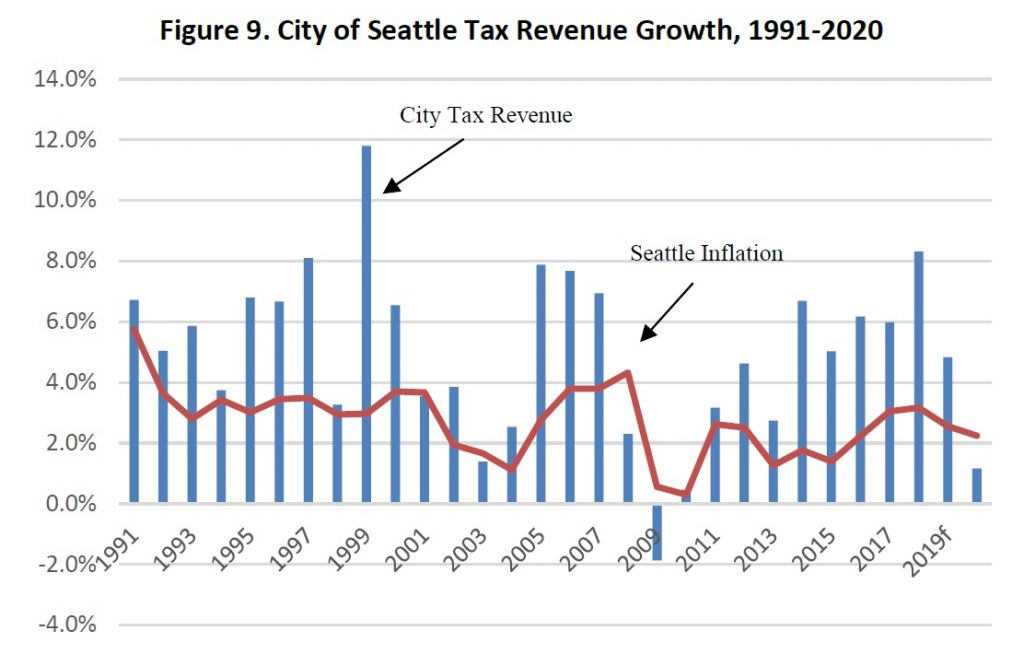 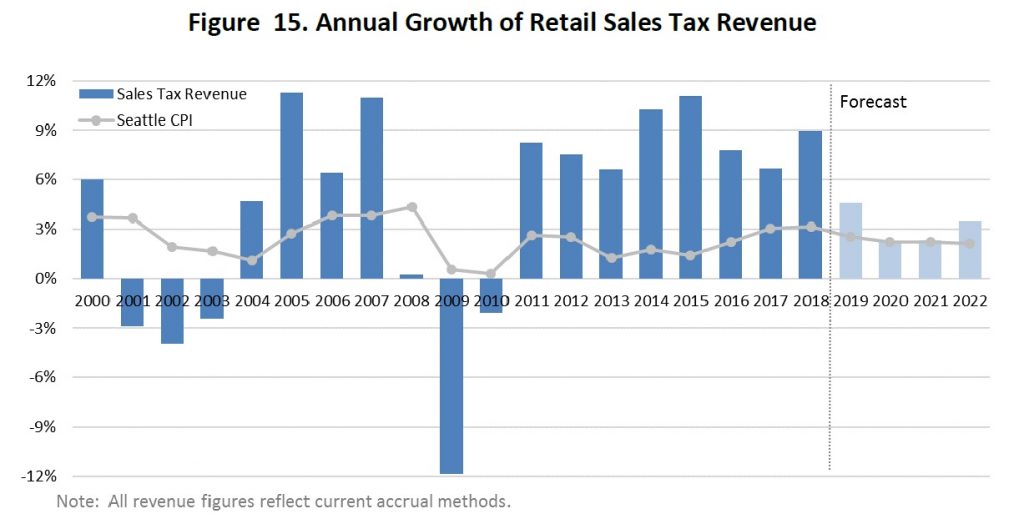 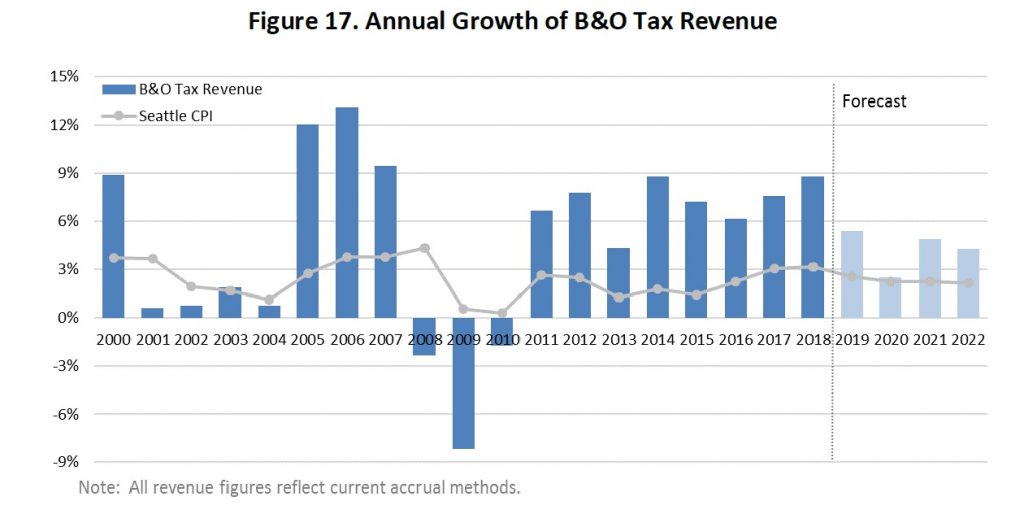