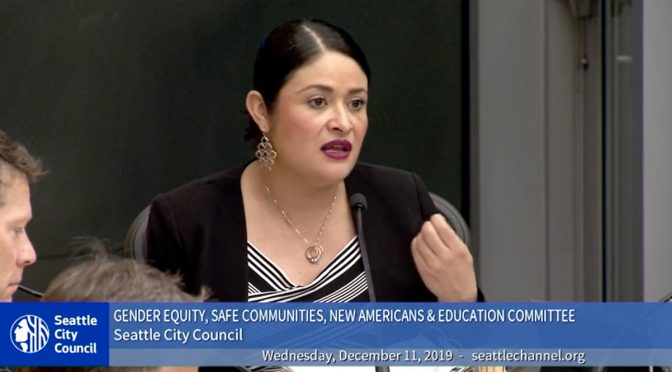 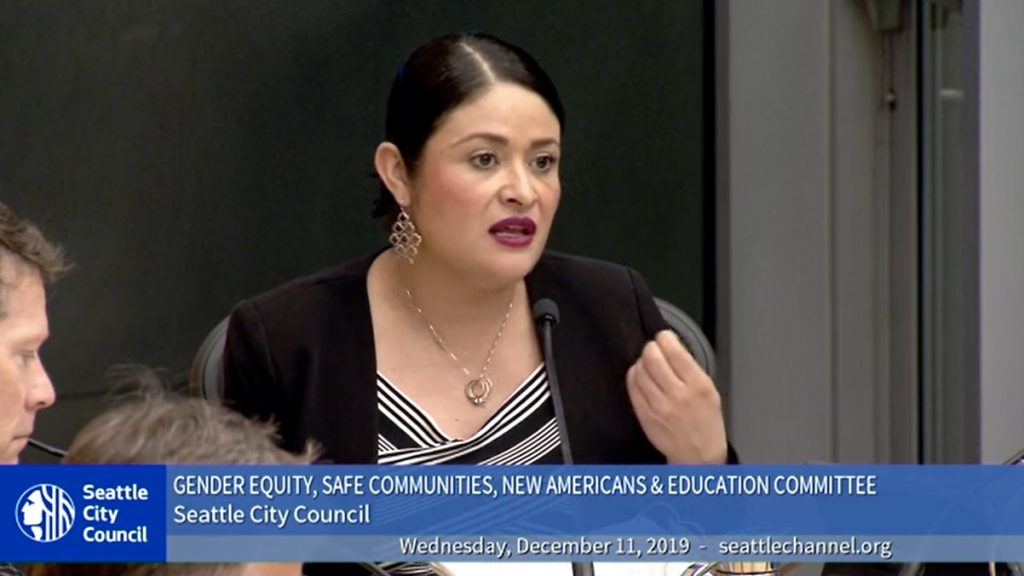 After the Council’s central staff presented an overview of the bill, Council members Gonzalez, Bagshaw, O’Brien and Pedersen were joined by a panel of subject-matter experts, including:

The conversation followed the same general narrative that I laid out in my previous post, summarizing the legal arguments for why the proposed ordinance’s prohibitions on contributions from “foreign-influenced corporations” and limits on contributions to PACs would, in the experts’ opinions, pass legal muster.

Darden said that there have been no signs that people are trying to circumvent the ordinance or to challenge it in court, though she speculated that they might see it during their 2021 mayoral election.

Weintraub proposed the legal logic for the restrictions on contributions from foreign-influenced corporations, noting that the Citizens United ruling said that corporations derive their First Amendment rights from the rights of their individual shareholders. Following that logic, she said, limits on contributions should also flow up to the corporation from the limits on its shareholders, because “you can’t have a right collectively that you don’t have individually.” To that end, she suggested that while some might see the 1%/5% ownership limit as a harsh standard, but it isn’t working its way down from a higher level; rather, it’s working its way up from 0% — the effective rate for a company owned by a single foreign national. This is a bit of a disingenuous argument, since the owners’ collective has a mix of individuals with different rights, and the question before the courts will be how to interpret the hybrid collective’s rights in that situation. The situations with 0% foreign nationals or 100% foreign nationals are easy to adjudicate; a mixture is far more complicated. Do you err on the side of granting more rights to some, or restricting the rights of others?

Coates continued pushing on the notion that 1%/5% is a proper threshold, hammering on the growing investment level of foreign nationals in U.S. corporations. According to Coates, 1 in 10 U.S. publicly-traded companies now have foreign owners that hold 5% blocks, and there are over 100,000 U.S. companies with over 50% fooreign ownership. He also cited (again) the SEC rule allowing an investor with a 1% share of a company to place an item on the agenda for a shareholders’ meeting, claiming that showed the influence of even a 1% shareholder. That’s also a slightly dodgy argument, since that isn’t “natural” influence of having 1% share: it’s a level of influence imposed upon companies by the federal government. Nevertheless, Coates insisted, based upon his experience as a corporate attorney, that a 1% share gives a shareholder the ear of the CEO and the ability to influence company decisions. He also reiterated the same point that Weintraub made: the rules are strict for foreign nationals (essentially a complete prohibition), and the question is how much looser the rules should be for corporations — but side-stepping the fact that the rules are already much looser for corporations and the bill would in fact be tightening them.

Alshuler spoke to the separate question of whether limiting contributions to super PACs is constitutional. “I can’t assure you there is no risk,” he said, going on to summarize the legal situation: rulings in the 9th Circuit and D.C. Circuit Courts of Appeals both prohibited limits on contributions, but the U.S. Supreme Court hasn’t ruled on the issue — neither ruling was appealed. Alschuler speculated that the Supreme Court, given its case history of distinguishing between expenditures and contributions, would probably overturn the appeals courts if given the chance — and he gave away the game here by saying that The “Clean Campaigns” law may be that opportunity. That is indeed what is going on here: this is being set up as a test case in the hopes that the U.S. Supreme Court will take it up and rule in favor of limits on contributions to super PACs.

There was no discussion today about whether the law should apply to union and labor organization PACs as well as to corporate and business PACs. That will also be a tricky issue to defend in court, as it raises a First Amendment concern about the government favoring certain entities’ political speech over others’, as well as an equal-protection issue.

The Council will meet in committee again on December 19th for “issue identification,” and then again on January 7th to consider amendments and possibly vote the bill out of committee. If that happens, the bill would come before the full City Council on January 13th for final approval.

On a side note, Gonzalez noted this morning that she would likely be absent for the final vote on her bill, since her baby is due on the Janaury 12th.

Thanks for reading to the end!  Articles like this one take days to research and write. If you find my reporting valuable, please consider making a contribution to support my work. Even just $2 a month helps. Thanks!