There is a trio of research papers from 2007 that look at how U.S. cities responded to the the Spanish Flu pandemic of 1918-1919. They provide interesting insights into how Seattle and other cities might respond today as the coronavirus sweeps across the country.

There are more than a few similarities between the Spanish Flu pandemic, which struck in multiple waves in 1918 through 1920, and the COVID-19 virus making the rounds now. Both are respiratory viruses and are suspected to be zoonotic in origin. Both started offshore and were imported into the country: Spanish Flu started on the East Coast and worked its way west, while COVID-19 seems to have made its big entrance along the West Coast (and particularly here in Washington) and is now starting to show up on the East Coast. Both viruses have similar patterns of transmission, symptoms and mortality. And it turns out that 100 years ago the public health systems did a pretty good job of record-keeping on deaths and the press did an equally good job of recording government actions to respond to the pandemic. 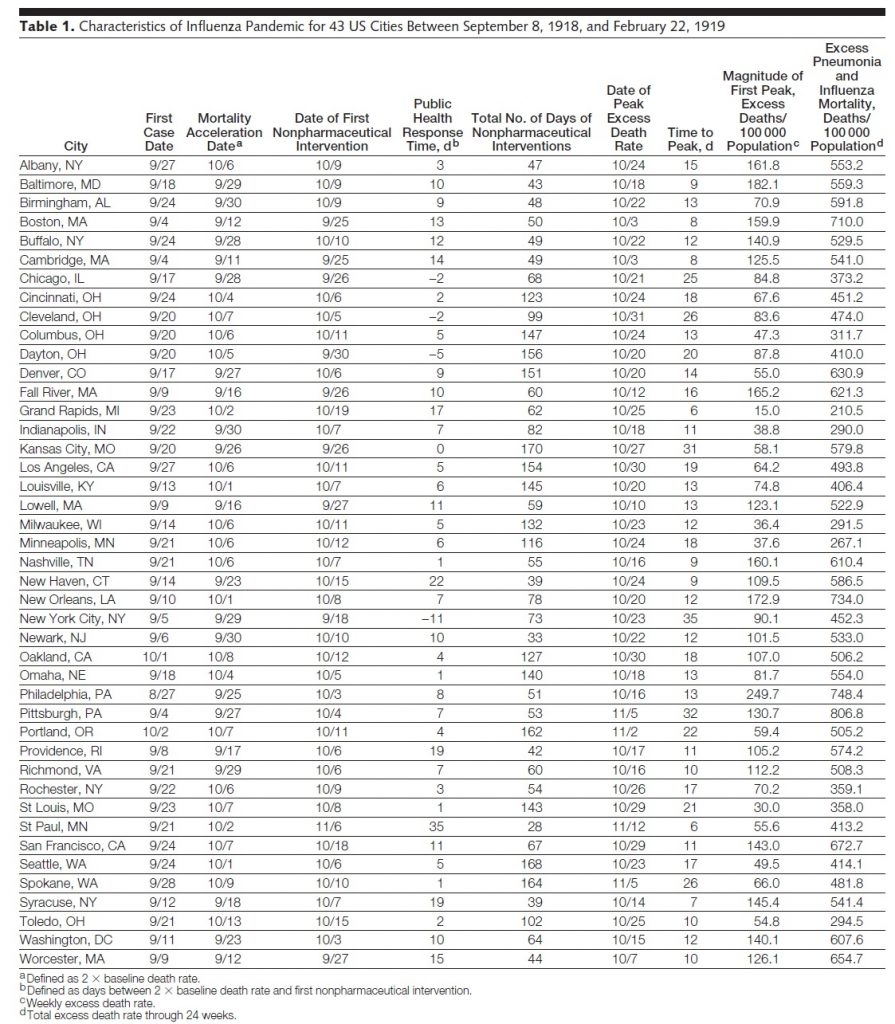 There are, to be sure, some differences as well. There was no air travel, though there were trains and ships that were well used as long-distance transportation systems, as well as streetcars and other means of getting around cities. Also, governments were more at liberty to impose draconian measures without regard to infringements on civil liberties. Also, 100 years ago families and households were larger, many people lived in crowded boarding houses, children spent fewer years as full-time students, and malnutrition was more widespread. And today there is a broader understanding of germ theory and how diseases are spread, as well as improved basic hygiene. Nevertheless, there are apt comparisons to be made.

The three papers (here, here and here) catalogue the “non-pharmaceutical interventions” (NPIs) taken by local governments to try to stop the spread of the Spanish Flu. Here are some of the findings from the papers, which for the most part independently come to the same conclusions:

We come away from these studies with a very messy picture of the challenge for public officials in deciding how to respond to the COVID-19 outbreak. They need to right-size the response: enough to save lives and slow the spread, but not so strong as to make future waves of resurgence inevitable. They need to respond early and quickly, but still ensure that people see and believe that the threat of the virus is real enough to take personal action. They need to delay the spread of the virus to buy time for the public health response, including treatment facilities, to mobilize. And officials need to decide how long to sustain the interventions, despite the substantial economic and political impacts. That was a challenge that officials faced in 1918 as well, and it looks like China’s leaders will be facing the same issue in the weeks to come: as a result of their draconian measures the COVID-19 outbreak in China seems to have peaked at around 80,000 cases — in a nation of 1.2 billion people. But it’s also severely disrupted their economy, and there will be enormous pressure to lift their NPIs before the virus is eradicated in the rest of the world (and before a vaccine is available in 12-18 months). Even if China completely eradicates the virus inside the country, it will be exposed to the risk of re-introduction from other countries. It appears unlikely that China will avoid a second wave of COVID-19.

Let’s hope Seattle, and the rest of the United States, fare better. There are lessons here for the many cities and states in the U.S. that still have no reported cases: they shouldn’t be waiting for the virus to show up to start preparing their response — or to take action. In 1918 several cities didn’t wait and were well served by being proactive.

In case you’re interested, the CPC maintains a list of research studies on non-pharmaceutical interventions for disease outbreaks.