Earlier this week the Institute for Disease Modeling (IDM) released a pair of research papers (here and here) looking at the transmission rate of the SARS-CoV-2 coronavirus in King County. It provides hopeful news for the effectiveness of the social-distancing methods being used to try to slow the spread, and it also suggests some new ways to predict how we’re doing.

The data that we’ve had to-date on COVID infections has been meager, mostly because of the lack of testing. But particularly over the past two weeks as testing has started to ramp up, it’s become more possible (though still not easy) to start looking for meaningful trends in the data. This becomes even more true as researchers try to find correlations with other related data sources that might be more reliable, such as hospitalizations and deaths: to the extent that modeling the number of infections using different sources produces similar results, we can feel more confident in those results.

The IDM has been working on a model for estimating “R”, the reproductive rate of the coronavirus (where R represents the number of additional people that an infected person will in turn infect). R changes over time as an outbreak progresses: R0 represents the initial, unimpeded reproduction rate in a community, where there are no measures in place to slow it down and no innate or herd immunity, but as measures are put in place and herd immunity grows, R will decrease. The farther than a community can lower R, the more likely that the disease outbreak can be controlled and eventually extinguished without a major healthcare crisis. Ideally, the goal should be to get R below 1; that’s the threshold below which the outbreak will start dying out as people recover from the illness.

The IDM now estimates that in King County R for COVID was about 2.7 at the beginning of March, putting it on par with a nastier influenza strain in terms of contagion; but by March 18 it estimates that R had been reduced to around 1.4. That’s a huge accomplishment that we can chalk up to all the social distancing measures that have been put in place; we’re not over the goal line yet, but it will save lives and significantly reduce the load on the county’s healthcare system.  A caveat: the R measurements have a large level of uncertainty at the beginning of the month (+/- 0.9), though it decreases significantly by March 18 (+/- 0.2).

Much of the two papers that the IDM released focus on looking to see whether various measures of population mobility correlate with the reduction in R over the last month. To do this, they used social-media data made available through Facebook’s “Data for Good” research program, which on a typical day tracks 230,000 people around the Puget Sound region. They collected mobility data for February 26 through March 28, as well as for a “baseline” period for three months before that. First, they checked to see whether the mobility data derived from Facebook was reasonably accurate by checking to see whether it correlated with local traffic data — and it does.

The researchers looked at where individuals were spending their time, and when and where they changed locations. Not surprisingly, they found that over March people spent increasingly more time in residential neighborhoods and less time in commercial and mixed use zones or at UW. The trend is much more prevalent on weekdays than on the weekends — which is partly because of people flouting the “stay at home” rules on the weekend, but also because in general people spend more time at home on weekends so the change to weekend behavior during March was less significant. 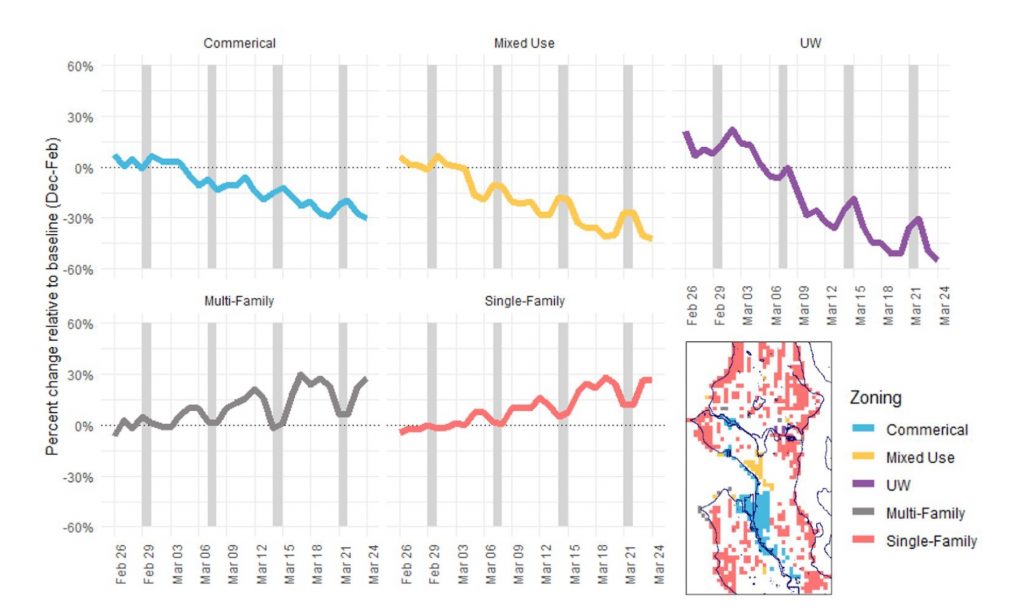 You can see in the map below how, at the beginning of the month, there was a lot of commuting — represented by a lot of people spending their day in one place and their night in another. But two weeks later, much of it had disappeared. 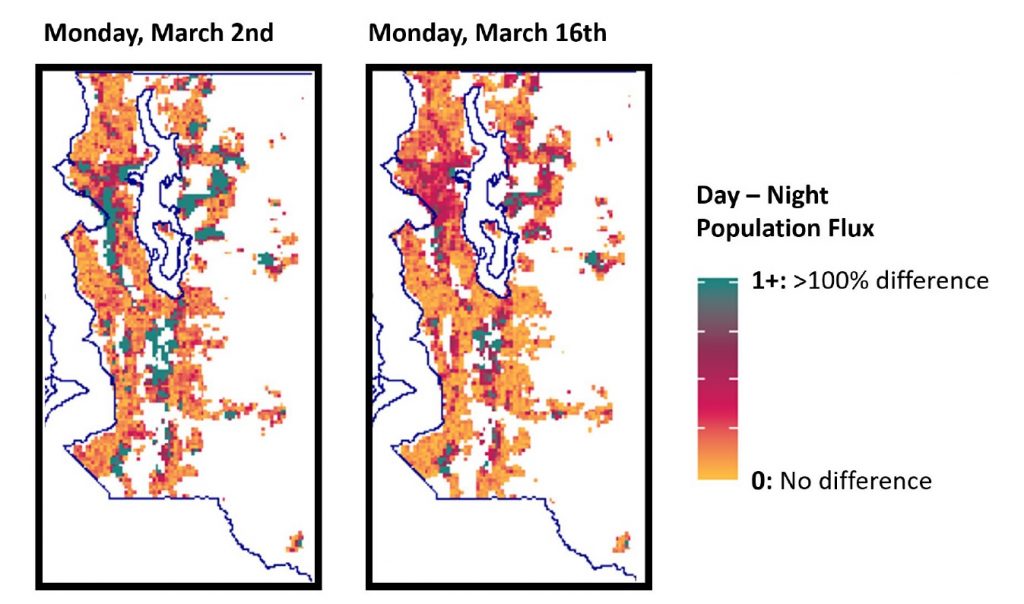 It’s interesting to look at the data at a more granular level: overall mobility has gone way down, but not as much on weekends. In fact, the situation has flipped: now more people are staying home during the week and getting out on the weekend, in defiance of the “stay at home” mandate (shame on us). 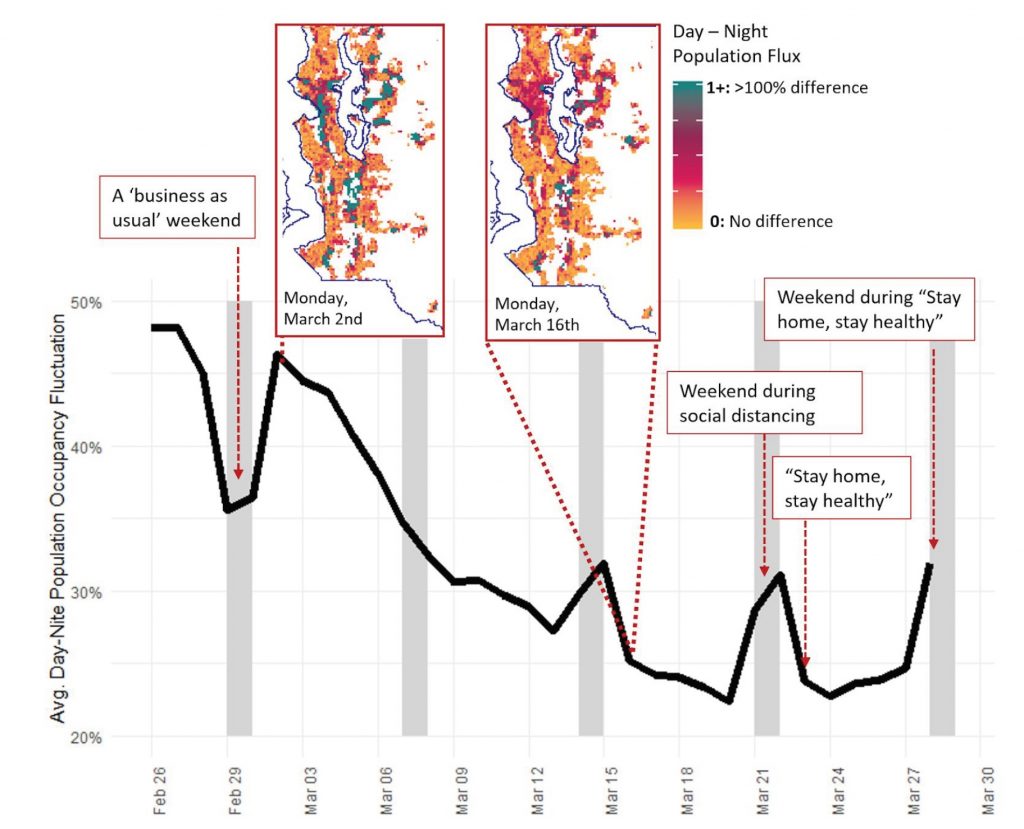 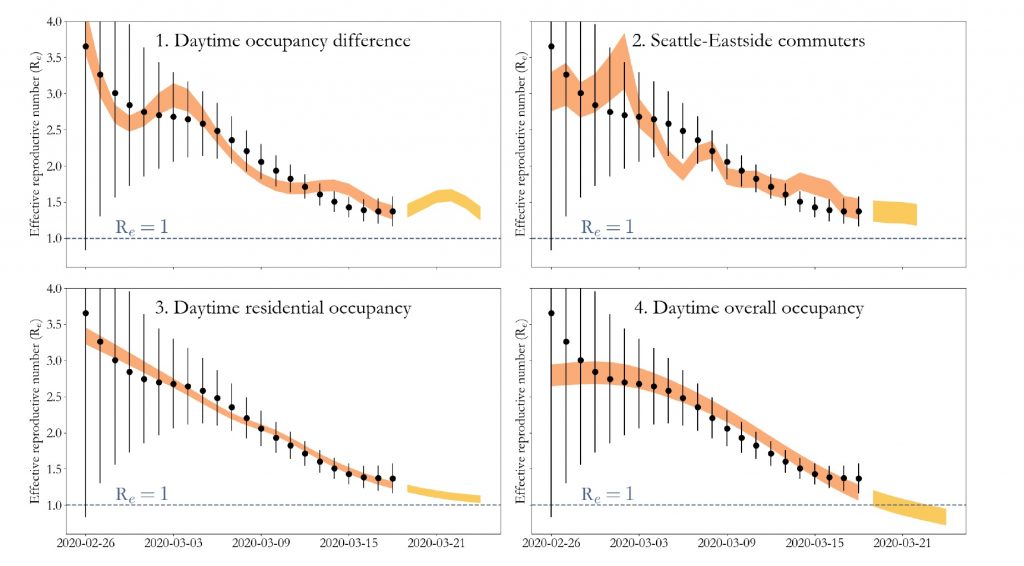 That doesn’t mean that we can assign a cause-and-effect relationship to any of these measures, or to some combination of them. But R is very difficult to measure, especially in real-time since there is a time lag in patients becoming symptomatic and in getting test results back. So having a way to accurately predict R, right now, is immensely valuable.

Unfortunately, the catch is that these four measures don’t yield the same predictions for the future; you can see from the charts above that according to the daytime overall occupancy data R should already be below 1, whereas the Seattle-Eastside commuter data suggests that we’re leveling off around 1.4. This is an interesting test for their predictive models: because of the lag in epidemiological data, they only have reliable information on infections through March 18; but Governor Inslee’s “Stay Home, Stay Healthy” order wasn’t announced until March 23. There’s a very good chance that R is significantly lower now than it was on March 18, but we will need to wait a bit longer to know for sure.

A follow-on question is whether the prediction of R gets even better when you combine the epi data and the Facebook mobility data. the IDM researchers built a new model that did just that, and it predicts that R was 1.3 +/- 0.07 on March 18 — just slightly lower, consistent with the case data, but with higher certainty.

The IDM researchers then used their new ability to model R to predict the trend for new daily cases in King County.

So far so good: yesterday there were 171 new COVID-19 cases, which is close to the predicted curve.

In all there is a bunch of good news: the social-distancing measures seem to be working so far (but please don’t ease up; we’re not out of the woods yet), and policy-makers potentially have a new tool that will help to inform them as to whether more drastic actions need to be taken without a 1-2 week lag time for data.