This morning, representatives of Seattle City Light went before the City Council to pitch a change to the retail electricity rates that the utility charges. The bottom line: no visible change to rates this year, and a 3.9% increase next year. But these are complicated times, and there’s a fair amount to unpack in their proposal.

The retail sales are to customers (residential, commercial, industrial, and government) in Seattle and a handful of neighboring jurisdictions that have contracted with SCL to provide electrical utility service. Since SCL is owned by the City of Seattle, the City Council officially sets its retail rates, based on a six-year Strategic Plan that is updated every two years. The utility sets its rates on a “cost recovery” basis, with the intent to cover its costs of operations, capital costs, and debt service. It understands reasonably well what its future costs will be for the power it generates itself, and for capital costs. The power it purchases from Bonneville Power Administration (BPA) is subject to periodic rate adjustments; the next one is coming up in October. What it can’t predict well is the weather, which can have a substantial effect on the amount of hydro-power SCL can generate in its own facilities; the demand for power, which fluctuates based on the weather, economic boom and bust cycles, pandemics (as it learned last year); and the cost of purchasing power on the open market if its own generation capacity and its contract from BPA together are insufficient to cover the demand.

The wholesale sales are to other power utilities on the open market, to the extent that SCL has spare capacity after serving its retail customers. SCL’s hydro-power is cheap compared to fossil-fuel-generated electricity, especially when factoring in carbon offset costs that some jurisdictions now impose on power generation, and is often still price-competitive compared to solar. Hydro-power is also available around the clock, unlike solar and wind power, and SCL sometimes plays this to its advantage by buying solar power during the day when it’s very inexpensive while holding water back behind its dams, and then running the water through at night and selling the power at higher prices on the market.

The problem with SCL’s wholesale revenues is that as more solar and wind power has come online and conservation practices have spread (including LED lights and more energy-efficient buildings and electronics), the price of wholesale power has dropped dramatically over the past several years. That has led SCL to lower its forecasts for wholesale revenues — and even then, it has missed them in several years. But the utility has a method for dealing with this, called the Revenue Stabilization Account (RSA): a $100 million buffer created as an insurance policy against another Enron-style (or Texas ice storm) implosion of the energy market. In years where wholesale revenues drop below the budgeted amount, the equivalent amount of money is withdrawn from the RSA to cover the shortfall. If the balance in the RSA drops below $90 million, then a 1.5% surcharge is automatically added on to retail electricity bills to begin to refill it; if it drops below $80 million, then the surcharge increases to 3%. Likewise, when the balance goes back above $90 million the surcharge is reduced to 1.5%, and it is removed entirely when the balance tops $100 million. At the moment, a full 3% surcharge is in effect, due to cratering wholesale prices in the latter part of the last decade that sapped the RSA’s balance. However, for reasons we will discuss shortly, there is good news on that front.

The Council approved a six-year rate plan in 2018 that included the following rate increases:

SCL was working on the 2020 update last year when the COVID-19 pandemic hit. As businesses shut down and people stayed home (many of them working from home), the utility saw a significant shift in electricity demand. Commercial demand plummeted; industrial demand dropped a bit, and residential demand rose. However, commercial customers make up 57% of SCL’s retail revenues, so the dramatic drop in commercial electricity demand made a big impact on SCL’s business. 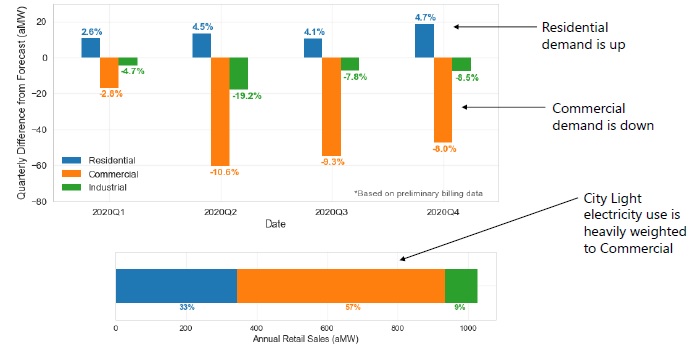 Still, recognizing the broad economic hardship the pandemic was causing to all of its customers, SCL scrapped the planned 5.4% increase, and cut $30 million of expenses in its budget to compensate. It also shelved the strategic plan update for the time being, until there was a clearer indication of what an economic recovery might look like. Since then, SCL has also skipped the rate increase of 3.6% planned for the beginning of 2021. But it can’t keep doing that forever: costs are still going up, and it’s creating a backlog of capital project work that will be important in the coming years.

However, SCL sees an opportunity to get itself out of this jam. In the last year the utility had much higher than expected wholesale electricity sales, due to two factors: higher-than-average precipitation that led to more water running through its generation facilities, and the decrease in retail demand. Wholesale prices weren’t necessarily better, but SCL had a lot more product to sell. Those extra revenues have quickly brought the RSA fund back up to $100 million, and the 3% surcharge is about to come off our bills starting in April. What SCL is now proposing is a 3% increase in retail rates starting next month to coincide with the removal of the 3% RSA surcharge: our bills won’t go up or down, but the utility gets some much-needed extra revenue to cover ongoing costs of operation. It will then follow that up with a 3.9% increase next January, the same rate approved by the Council back in 2018.

It is now working again on the update to the six-year Strategic Plan, which it expects to bring to the Council in May. You can see in the above table the draft target rate increases it currently plans to propose in that update.

One last twist: SCL expects the Bonneville Power Administration to adjust its rates down by about 1.5% in October. That decrease is automatically passed through to retail customers through a corresponding rate decrease. If that prediction turns out to be accurate, then next January’s proposed 3.9% increase will effectively be just a 2.4% increase. That translates to $1.80 per month for a typical residential customer, or 72 cents per month for those low-income customers enrolled in the city’s Utility Discount Plan.

The new strategic plan will be interesting, as it projects out retail demand for the next twenty years — a task that SCL (and the rest of the industry) has been notoriously bad at, even in the short term. But last year it introduced a new forecasting model that stopped predicting demand would go up in the next few years. That model needs to be reset since demand took a 4.1% drop last year, but SCL’s new reality is that any future increase in demand will be tied to one thing: broad-based electrification of transportation and buildings The extent to which that happens between now and 2040 could affect SCL’s retail demand by as much as 10%, according to their current calculations. 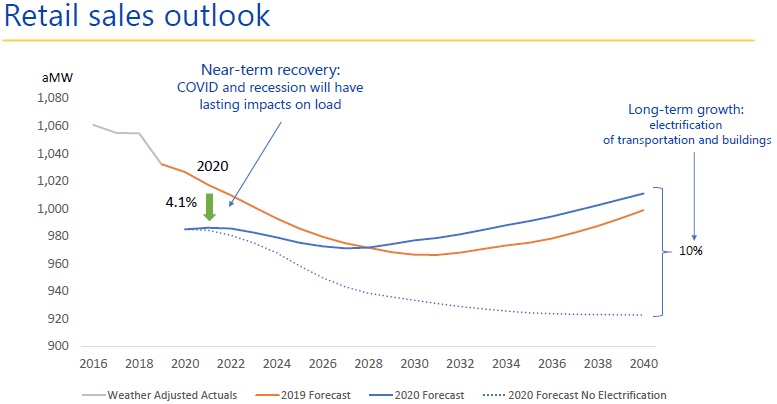 For the moment, that is a discussion for another day (in May), and will no doubt be tied to SDOT’s “Blueprint for Transportation Electrification” that it just released. And farther down the line, SCL will need to address a thornier, and more politically-charged, question as to whether to rethink its rate plan more radically in terms of the more favorable rates it gives to some of its larger customers — a question that came up in 2018 with the last iteration of the Strategic Plan but was ultimately kicked down the road over the protests of Councilmember Sawant. But for now, the question in front of the Council is whether to approve the immediate rate change — or rate swap, perhaps more accurately. Councilmembers voted it out of committee this morning and teed it up for a final vote on March 29, waiting an extra week so that they could spend a little more time asking questions about a complicated proposal. But at this point, there is no indication they will reject it.