This is the second in a series of articles drilling into the details of Mayor Durkan’s proposed 2022 budget. The first installment, looking at city revenues, is here. This installment dives into the Mayor’s proposal for how to spend the forecast $235 million in payroll tax revenues next year, which has already raised some eyebrows among the City Councilmembers.

Let’s begin by refreshing our memories on the history of the payroll tax. When it was first passed last summer, the Council set an effective date of January 1, 2021, and dedicated the entirety of the 2021 revenues to offsetting COVID-related revenue shortfalls in 2020 (they borrowed the money from other city funds with deep pockets, and intend to pay it back when the 2021 payroll taxes are collected next February). At the time, the Mayor and Council had strong disagreements about how the funds should be used — not to mention about whether a payroll tax should be imposed at all in the middle of an economic recession — so the to prevent the Mayor from proposing other options for how the funds should be spent in future years, it decreed via ordinance that all payroll tax revenues should go into a special fund with restricted uses. The ordinance includes specific formulas for calculating how much of the payroll tax revenues should be spent on each of several categories that the Council determined were its priorities. Mayor Durkan objected to this too, arguing that it was foolish for the city to tie its own hands and reduce its flexibility in how it may spend city revenues in the midst of a pandemic, a homeless crisis, and a recession. But the Council had a veto-proof majority and got its way — the Mayor simply returned the ordinance unsigned and let it pass into law.

The spending plan ordained by the Council is complex. First, it says that if general fund revenues are projected to fall below $1.51 billion in a given year (the original 2020 general fund budget before the pandemic hit), payroll tax revenues may be used to top it up to $1.51 billion. The remaining payroll tax funds should be spent as follows:

The 62% earmarked for housing and services is further subdivided:

The ordinance is also clear that the Council intends for the payroll tax funding to be additive to the amounts in the city’s 2020 budget, and not dollar-swaps for existing funding.

It’s time to crank up Excel and run the numbers.

General fund revenues in 2022, excluding payroll taxes, are forecast to be $1,429,174,000. According to the formula in the spending plan ordinance, that means $80,855,000 of payroll tax dollars can move over into the general fund to top it up, leaving $153,772,000 to be applied to the ordinance’s allocation-by-percentage formula. 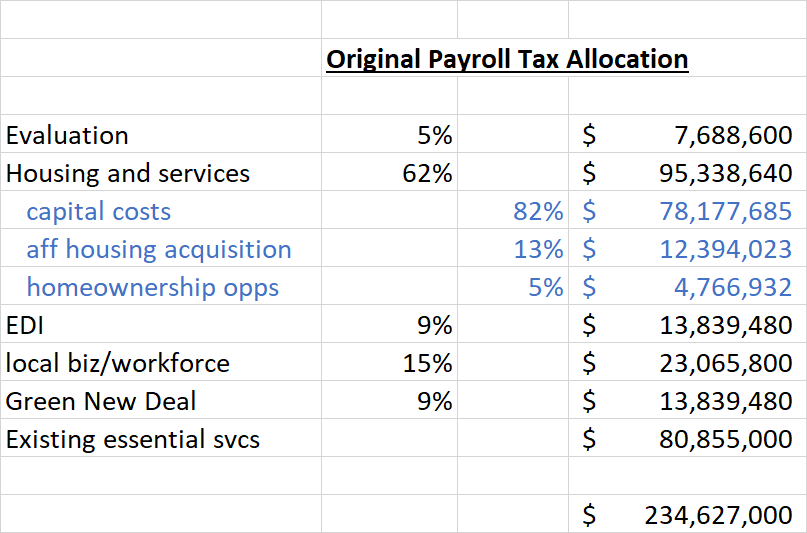 The Mayor, however, has proposed a different allocation. First, she redefined the “housing and services” bucket to include homeless response services, and added $9.7 million to that subcategory. Second, she reduced the spending below the target allocations in three categories: evaluation and administration, housing and services, and local business/workforce support. Third, she moved the remainder of the payroll tax revenues — another $66.9 million — to the general fund, raising that total to $147.7 million.

There is in fact a method to the Mayor’s madness, though you may not agree with it. You will recall from the previous article that the city has two large buckets of new money this year: the payroll tax, and the second tranche of ARPA federal relief funding — another $116 million. Those federal dollars come with plenty of restrictions on how they may be spent, external restrictions that the City has little to no flexibility on. The payroll tax revenue restrictions, in contrast, are self-imposed, and the City Council can modify or remove them at any time. The Mayor chose to invoke a tried-and-true budget tactic: spend the most restricted funds first, and the least restricted funds last, to maximize flexibility in what you can use remaining dollars to fund. Since there is substantial overlap between the allowed uses for ARPA funds and the Council’s payroll tax spending buckets, she chose to put almost $98 million of the ARPA funds into those buckets and then to supplement that with payroll tax dollars. By doing so, she claims that she has met the Council’s spending targets in the payroll tax ordinance — just with a different mix of funds.

If we check the numbers, we see that the Mayor is mostly telling the truth. There is substantially less spent on administration and evaluation, though that’s overhead and especially this early on it is probably a good thing to be underspending there. The proposal misses the target on housing capital costs by $12 million, though because of the new investment in homeless services it meets the overall target for housing and services by a large margin. All the other categories are approximately at or above the Council’s target spend level.

But that is only the first part of the Council’s stated intent with the funds: the second part is that they wanted the funding to be additive to the amounts in the 2020 adopted budget, not a dollar-swap.

When we compare to the numbers in the 2020 adopted budget, we see that several categories are almost spot-on: for instance, the total increase in spend on housing and services is $93.9 million, whereas the intended payroll tax allocation was $95.3 million. The housing capital costs are now also almost in-line, bolstered by spending from other sources beyond the payroll tax and ARPA funding. The budget for business and workforce support misses the target, as do home ownership program investments.  There was no EDI in the 2020 adopted budget, so that category is entirely additive; similarly, the only Green New Deal spending in the 2020 budget was to hire a staff person to spin up the program.

A further part of the Mayor’s stated justification for moving more payroll tax dollars into the general fund was to “support the Council’s other priorities” as represented in legislation enacted over the past year. According to the Mayor, that includes ongoing funding for the Equitable Communities Initiative, participatory budgeting, and other civilian and community-based alternatives to policing to enhance public safety; restoring the parks and libraries departments to their full pre-pandemic funding levels; and rebuilding the city’s emergency reserve funds. The Mayor’s proposed budget certainly invests in those three, and more; however, it will be up to the Council to decide whether those are appropriate uses of payroll tax funds. As we discussed in the previous article, moving $147 million of payroll tax revenues back into the general fund keeps it flat year-over-year.

To achieve these changes to the Council’s legislated spending plan, the Mayor included in her budget package a bill that would rewrite the Council’s ordinance. For 2022, it lists the specific dollar amounts she includes in her budget. For 2023 and beyond, though, it erases the formulas and percentages, and simply lists a set of allowable categories without specific apportionments:

B. Beginning with the 2023 Budget and in subsequent years, the proceeds of the Payroll Expense Tax may be used for any or all of the following purposes:

The Mayor’s category list includes “maintenance of existing essential City services,” which in practice is so broad as to be nearly all-inclusive and would probably be used simply to continue moving an arbitrary amount of payroll tax revenues into the General Fund every year. While in-line with previous comments by the Mayor about not “tying their hands” with self-imposed spending restrictions, it is very unlikely to be passed by the Council in this form.

There are two policy questions that the Mayor’s proposal for how to spend the payroll tax funds bring to the surface:

1. With regard to the 2022 budget, the Council intended the payroll tax funds to be additive, not replacements for existing funding. The Mayor seems to be trying to meet that goal, though by mixing multiple funding sources. Is that appropriate, or should the Council amend the budget to ensure that the full amounts of payroll tax revenues originally specified in their spending plan ordinance are appropriated? To do so would be tricky, as they would need to unwind some of the Mayor’s other proposed payroll tax uses — and many of those wouldn’t be eligible for ARPA funding. If they truly are “Council priorities” as she says, the Council may have few options.

2. For 2023 and beyond, should the Council maintain its original, very specific spending plan and, as the Mayor argues, “tie its own hands”? Certainly in the context of last summer when the spending plan ordinance was being written, it was at least in part a clap-back at the Mayor during the power struggle between the executive and legislative branch over budget issues. But Mayor Durkan will be out of office in less than three months; would the Council feel the same way about tying the hands of a Mayor Gonzalez, if she were to win the upcoming mayoral election? On one hand, the Mayor’s proposed budget is just that — a proposal — and the Council always has the final say on the budget and can rewrite it as it sees fit. On the other hand, looking at the Mayor’s proposal for use of ARPA and payroll tax revenues, and how difficult the Mayor can make it to unwind the complexities of a spending plan in order to take back money, there’s a good argument that a Mayor has at least some power to tie the Council’s hands as well. Unfortunately, when it comes to self-imposed spending restrictions, the Mayor will always have the power to include a bill changing spending restrictions as part of the budget proposal, just as Durkan has done here; that certainly raises valid questions as to how much, if at all, the Council can truly constrain a Mayor’s proposed budget before it’s dropped in its lap.

Next up: a detailed look at the expense side of the Mayor’s proposed budget.