Last week Mayor Durkan transmitted to the City Council her proposed budget for 2022. The Council immediately began its deliberations on the merits and drawbacks of the proposal, and things they might want to change — a process that ends the Monday before Thanksgiving when the Council votes to formally adopt a 2022 budget.

This is the first part in a series of articles on the Mayor’s proposed budget. This installment focuses on the revenue side.

The proposed budget forecasts just over $7.1 billion in revenues for the city government next year, up about $500 million from 2021. Those revenues come from 80 separate sources: two over $1 billion each (Seattle City Light and Seattle Public Utilities), twelve between $100 million and $1 billion, and the rest under $100 million. Here is the complete list (thanks to the City Budget Office for supplying this at SCC Insight’s request).

Of that sum, about $1.56 billion is unrestricted “general fund” dollars; the rest come with restrictions on how they may be spent.

Setting aside the two utilities, which are run as separate businesses (the Mayor and City Council have some say over how they spend money to run the business but by law can only extract money from them for other purposes through utility taxes), there are two dominant narratives around revenues:

The Mayor’s budget keeps the general fund flat at $1.56 billion, though there is a fair amount of shifting in the underlying sources. Mostly there are large increases in small budgets, and small increases in large budgets, driven by the recovering economy; the one notable exception is the B&O tax, which is growing back substantially both in relative and absolute terms. Those increases are offset by $235 million in payroll tax revenues taken out of the general fund — though in the Mayor’s proposal $148 million is put back in through an “interfund transfer.”

Here’s a look at several of the more significant changes. 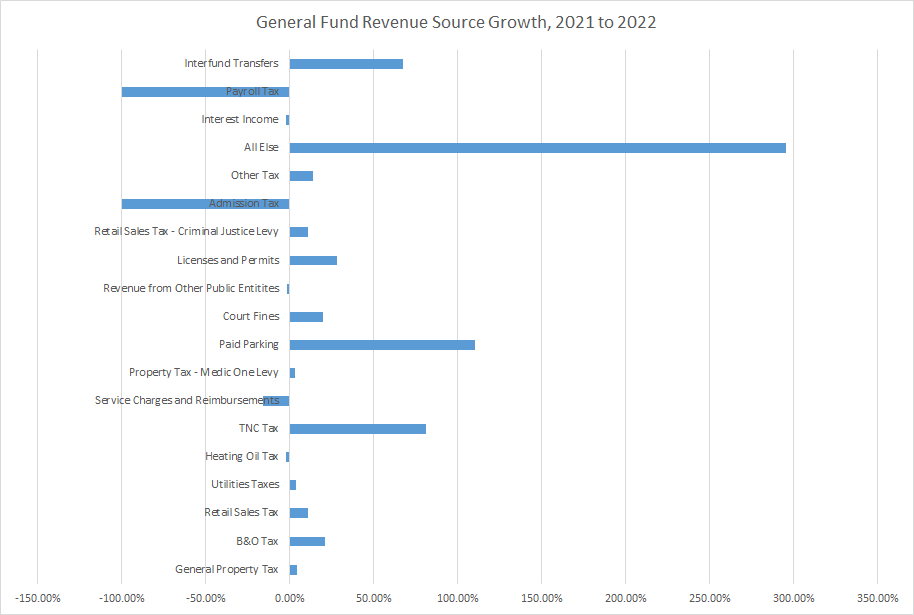 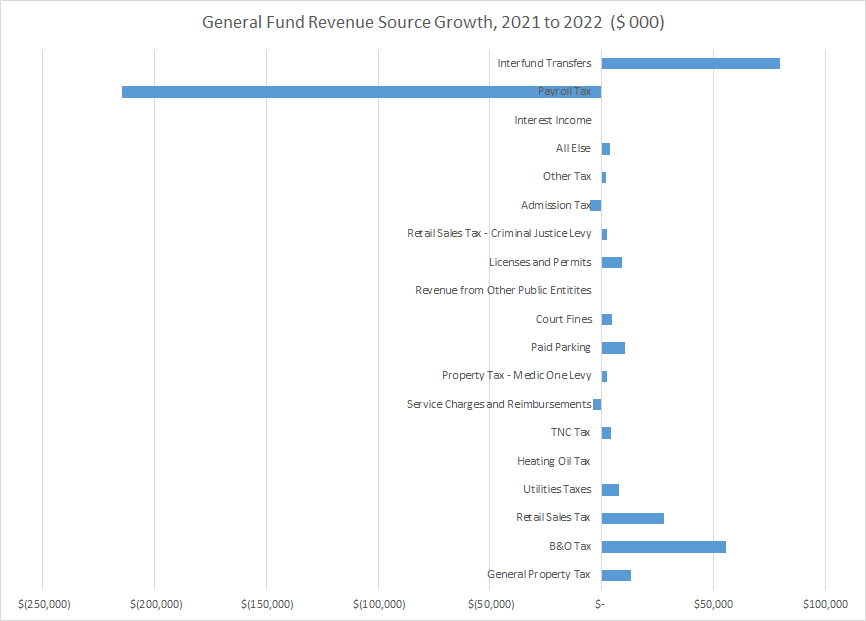 As in past years, there are four big sources that make up the lion’s share (about 71%) of general fund revenues: property tax, B&O tax, sales tax, and utility tax.

You can see in the year-over-year trends the effect of the revenue hit in 2020 (and the federal relief funding), the payroll tax in 2021 (ARPA funding is restricted use and therefore not in the general fund), and the Mayor’s proposed transfer of payroll tax funding back over in 2022. You can also see that the “big four” revenue sources are nearly back to their 2019 level.

Next up: we’ll dive into the Mayor’s proposed spending plan for ARPA relief funding and the payroll tax revenues, and why it’s controversial.