Late this afternoon, Mayor Murray dropped a bombshell on the District Councils — quite literally. He blew them up.

Established in 1987 by resolution 27709 as part of a larger Neighborhood Planning and Assistance Program (which also established the Community Service Centers and the Department of Neighborhoods), the District Councils (DCs) were intended to be populated by representatives of community councils and neighborhood business organizations within each district — though not to restrict those organizations’ ability to interact with city officials directly and independently. Each District Council then chose one business representative and one residential  representative to serve on the City Neighborhood Council (CNC).  Collectively the DC’s were tasked with being a “forum for consideration of common concerns including physical planning, budget allocations and service delivery and for the sharing of ideas for solutions to common problems,” and the CNC was asked to “review and recommendations regarding City budget issues including the general fund, capital and block grant budgets and the Neighborhood Matching Fund.”

The Neighborhood Matching Fund, which is still active today, is a sub-fund of the city’s budget allocated toward projects in each neighborhood. The DCs and CNC rate and prioritize those projects, and that process is seen as one of the most substantial and coveted annual duties of the District Councils.

Almost immediately it became clear that the District Councils were not reflective of the population of the city as a whole, and so in 1989 the Council passed Resolution 28115 which tweaked the program to try to achieve better diversity. It added language to the description of membership of the District Councils to say:

So how did that work out? Well, in 2009 a City Auditor’s report found multiple dysfunctions in the District Council system, not the least of which was that the Councils still were not representative of the diversity of the city’s population.

A demographic study in 2013 found that the 150 District Council members where overwhelmingly white, over 40, and homeowners, whereas in Seattle’s population the median age was 36, 34% were people of color, and 52% were renters. 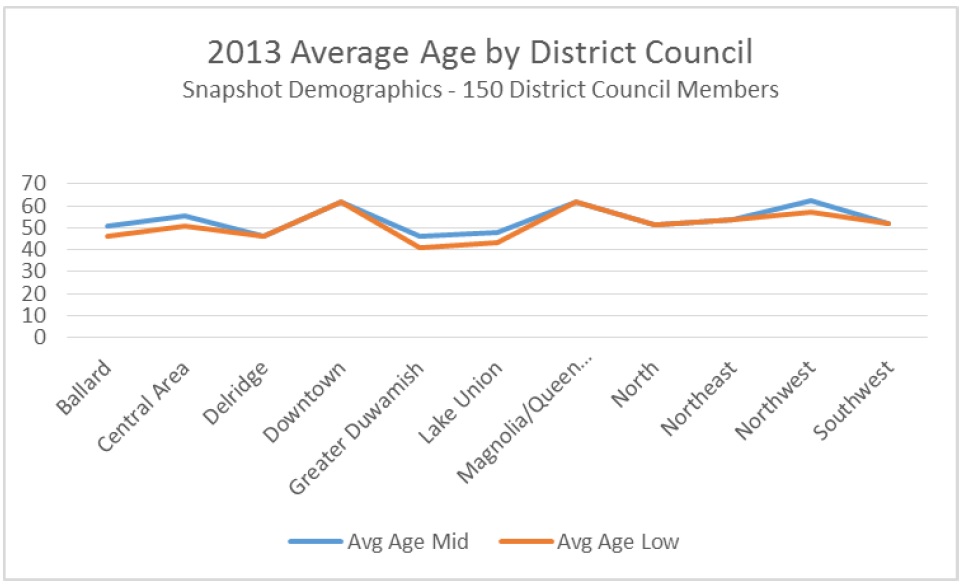 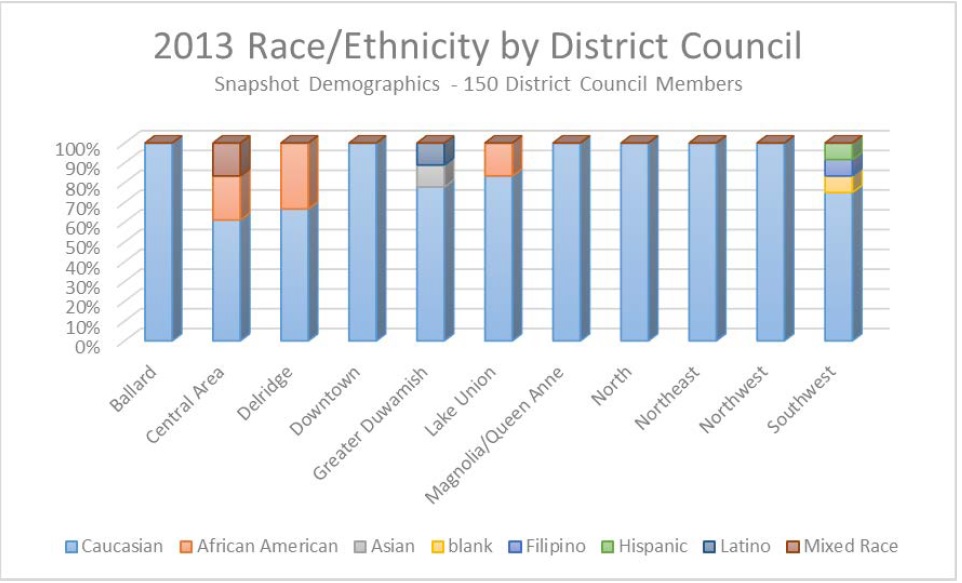 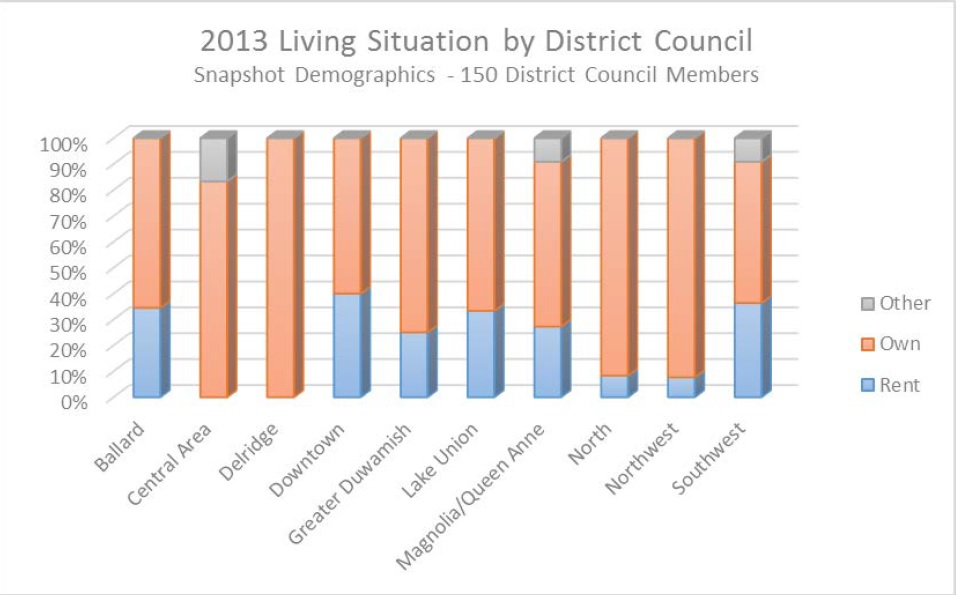 Which brings up back to last fall’s Statement of Legislative Intent. On May 3rd of this year, Department of Neighborhoods Director Kathy Nyland delivered a preliminary response to the SLI to the Council’s Affordable Housing, Neighborhoods and Finance Committee. In that report, she argues that while District Councils do some good work, and the people who serve (as dedicated volunteers) on DC’s largely feel that they are working for them, they are still far from representative of the city’s population. Further, she suggests that geography as the single organizing principle for community involvement is an outdated view, as many people experience community through common “language, ethnicity, religious affiliation, or issue-based interests.” While the preliminary report never explicitly argues that DCs should be abolished, it does say:

… Seattle’s demographics are changing. Perhaps this is the time for some of the City’s systems and structures to change as well, to become more responsive and accessible to a new generation.

The timing of today’s announcement is curious. The preliminary response to the SLI in May promised a final report by July 15th: two days from now. We can now guess what that report will recommend, and it’s fair to assume that the Mayor did not want such a drastic change to show up quietly in a bureaucratic report to the City Council — thus the press release today.

On the flip side, the timing is also bad, because the existing city municipal code specifies that not only must the District Councils be consulted as part of the Mayor’s submission of his budget for the 2017-2018 biennium (which is due shortly), but the District Council and City Neighborhood Council are also to be consulted with on updated to the Comprehensive Plan and the accompanying Neighborhood Plans. So by withdrawing immediately all resources and support for the DC’s and CNC before the Council can pass legislation to abolish them (assuming they agree with that  recommendation) the Mayor has made it impossible for those legislative requirements to be fulfilled.

It’s likely too that some will argue that the Mayor doesn’t have the authority to take this drastic step. In his executive order, he spells out what he believes his authority is to do so. Essentially his argument goes like this:

Some will certainly quibble with the Mayor’s logic, and those invested in the current system will take issue with the notion that the DC’s are broken. But it’s hard to argue with the fact that they are not representative of Seattle’s population. And then there will be the debate about whether the existing DC’s can and should be fixed, instead of scrapping them entirely for a new, different, as-yet-unknown system for community engagement.

The most eyebrow-raising part of the Mayor’s executive order, however, is the brashness in immediately pulling the plug on the DC’s and re-allocating the supporting resources. It may or may not be legal (since those resources were allocated for that specific purpose in the legislation), but was it necessary? A more conservative approach would have been to keep the DC’s running while the legislative process runs its course on creating a replacement. The only thing the Mayor buys by cutting ties now is the ability to reallocate those resources to help drive the process of creating the new system — and arguably the people with the most to lose (i.e. their jobs) and who are deeply invested in the old system are probably not the right people to be leading the discussion of how to replace it.

The Mayor’s FAQ states that the DC’s and CNC have not been disbanded. That’s technically correct, but highly misleading. First, he is withdrawing all resources and support, so they might continue to exist but without logistical support and any formal, sanctioned pipeline for communicating with city government. Second, his executive order specifically anticipates superceding the resolution that establishes the District Councils, which means they will no longer be recognized by the City. So for all intents and purposes, they are orphaned now and will lose their charter in October.

There is time pressure to get this done given that any changes to the Department of Neighborhoods’ budget will need to be incorporated into the 2017-2018 budget process; thus the late-September deadline for draft legislation.

The coming days will be interesting as the smoke clears from today’s announcement. It will be very interesting to see how much political clout the District Council members have, and how much pressure they can bring upon the City Council.  So far, there is no response from Council member Tim Burgess, the Chair of the Affordable Housing, Neighborhoods and Finance Committee as well as the Budget Committee. His leadership and cooperating will be essential for the Mayor to see this through.

And by Friday we will have the Department of Neighborhoods’ final response to the Council’s SLI, which will no doubt contain further details on the plan to replace District Councils.

UPDATE Thursday 6:30pm: This evening Council member Burgess told me that he had not yet received the final response from the Department of Neighborhoods which is due tomorrow. He had no other comments on the Mayor’s announcement, other than to say “Haven’t fully engaged on this topic just yet.” That certainly implies that the Mayor and Department of Neighborhoods didn’t consult with the City Council before announcing their plan. UPDATE to the UPDATE Friday 8:30am: Councilmember Burgess clarifies: “I was briefed so I knew the general direction they were headed. My committee will take this issue up this summer.”

UPDATE Tuesday 7-19:  Here is the final version of the SLI response from the Department of Neighborhoods. More once I get a chance to read it in full.