Earlier this month, a UW research team released its first report from its city-funded longitudinal study on the impacts of Seattle’s increase to the minimum wage. This morning they presented their findings to the City Council.

Here’s my earlier story on their baseline study back in April.

It’s important right up front to acknowledge the limits to this report. The minimum wage law went into effect in April of 2015 with the first of several phased increases to the minimum wage. The research team got around 4 terabytes of data from the state government which is comprised of quarterly reports from employers in Seattle and across the state, and they used that data set to look at what happened from April through December 2015. So it’s a short period of time, for just the first and lowest phase of the increase; the long-term trends mike look very different as the rest of the phase-in progresses. 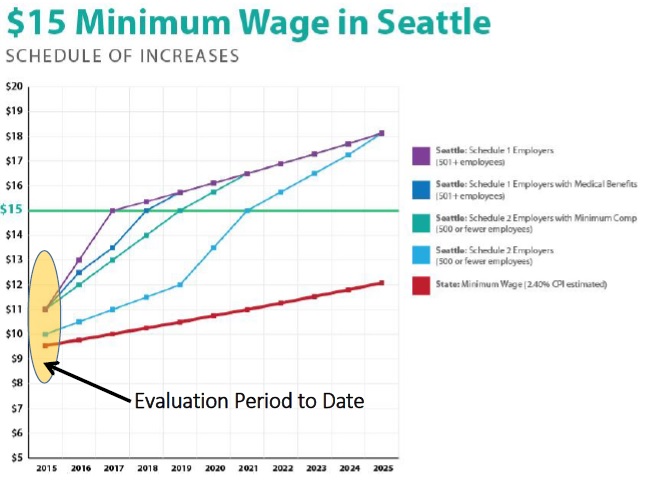 Also, the data set doesn’t include contractors, or those who are getting paid under the table, so to the extent the minimum wage increase have shifted employers to use contractor relationships instead of hiring employees, or to employ and pay people off-the-books, that is not represented in the data.

The team also hasn’t looked at how the minimum wage applies to different demographics — yet. They plan to do that in their next phase, but for now it’s all one homogeneous group of employees. And they also are working on a separate study on how the minimum wage has affected nonprofits, commissioned by the city auditor’s office.

The team warned again generalizing these results to other cities, or to the state as a whole.

With all those caveats, they attempted to answer three central questions:

The easy part is to do direct observations and report the data.  The hard part is to ask and answer the contrafactual: what would have happened if Seattle hadn’t raised the minimum wage? The traditional way to answer that is to look at what happened in neighboring cities and counties, or in similar cities in other parts of the country. To that end, the study group looked at all of King County excluding  Seattle and Sea-Tac (since it also has raised its minimum wage), and a combination of Pierce, Snohomish and Kitsap Counties. But they came up with a new third point of comparison, which they dubbed “synthetic Seattle.”

Synthetic Seattle identifies zip codes in Washington state where the economic data patterns for the ten years preceding April 2015 closely matches Seattle’s, and combines their labor data for April through December 2015 — with the reasoning that those areas become a proxy for what would have happened in Seattle without the minimum wage increase. To the extent that general economic trends drove up employment and wages, that would be seen in Synthetic Seattle’s data. It’s a clever idea, though a new one.  In the end, they looked at all three and reported results when they found consistency across them; that level of consistency lends stronger credence. 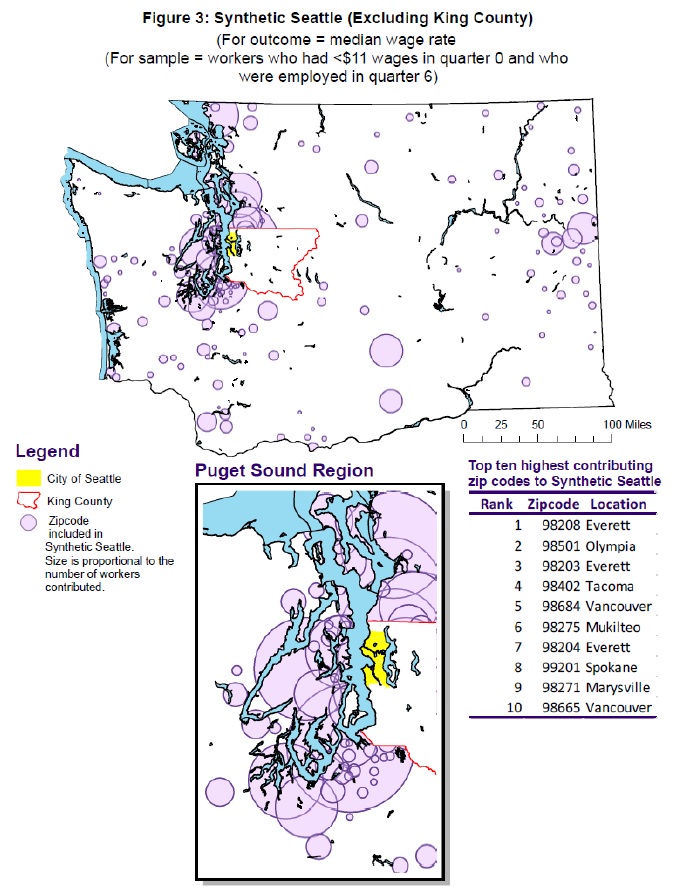 And they came up with a fourth point of comparison that they called “business as usual” which assumes that Seattle’s economy would stay consistent with the previous years.

So then the math works like this:  take the observed economic data for Seattle, subtract out the “business as usual” baseline and the contribution from the 2015 changing economic climate as seen in the comparators, and what’ left is the impact of the minimum wage. 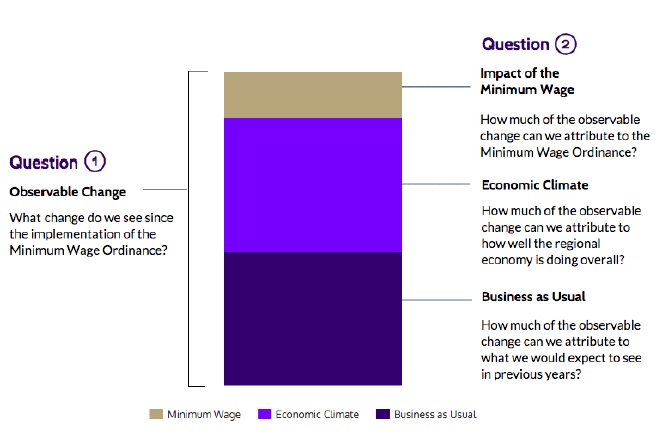 So what did they find? Let’s go back to their original three questions:

What happened to wages? They went up — in fact almost exactly as you would expect them to after a minimum wage increase. 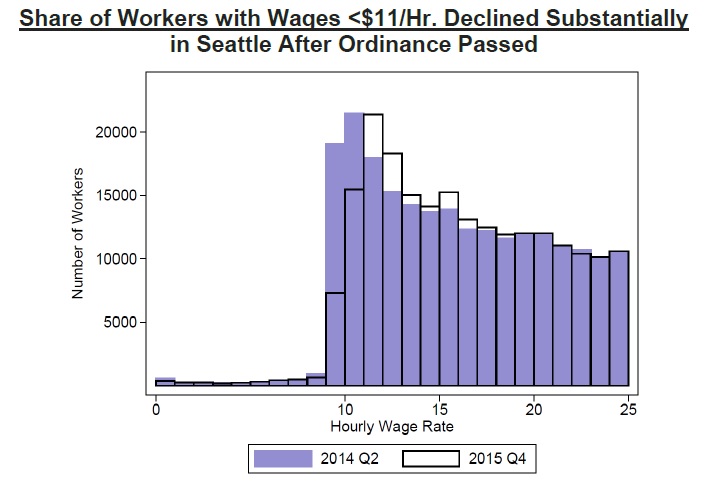 After the increase, there has been a clear shift up in wages. (as an aside, there’s probably some data error in the bars below $10 — the wage is calculated by dividing the total earnings by the number of hours worked, and if either of those numbers is reported incorrectly, the wage rate will be wrong) 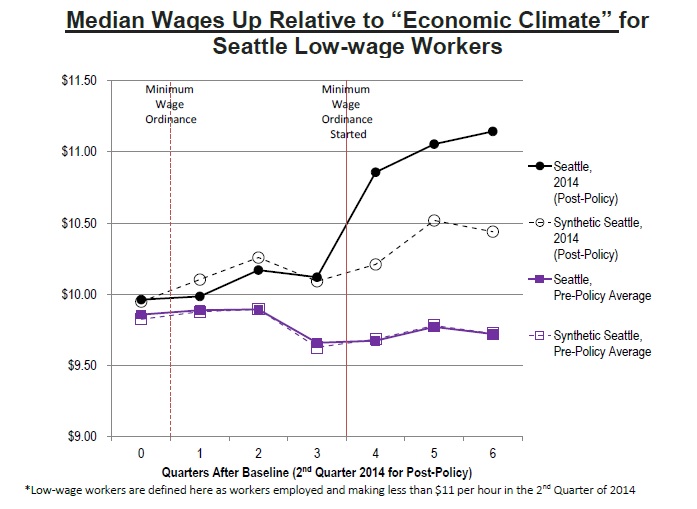 Subtracting that out, the researchers concluded that the effect of the minimum wage was to raise wages for low-wage workers by $.73 per hour.

The team used the same methodology to look at employment, hours and earnings: 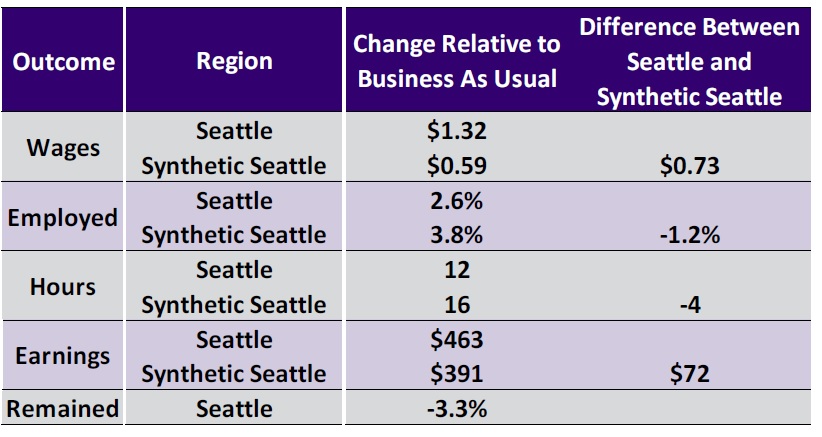 Employment went up 2.6% in Seattle compared to what would have been predicted by historical trends. But Synthetic Seattle did even better: employment rose 3.8%. If synthetic Seattle represents the effect of the economic climate, then the minimum wage just slightly slowed employment growth. That’s hardly the “job killer” that was predicted by the opponents of the minimum wage, but it’s noticeable; it’s also just the first phase of the increase and we can’t predict what happens from here.

Similarly, the number of hours worked by a low-wage worker grew by 12 hours per quarter in Seattle, and Synthetic Seattle slightly outpaced it at 16. That’s a little bit of drag, but hardly a boat anchor — a difference of 16 hours per year for a worker on average working just over 1000 hours per year (according to the research team’s data).

For earnings, however, Seattle outpaced Synthetic Seattle with an increase of $463 per quarter versus $391. That’s $72 per quarter, or $288 per year, attributable to the minimum wage increase that’s money in low wage workers’ pockets. But there was an important caveat here: there was significant variation across the points of comparison. Seattle outpaces Synthetic Seattle, but it lagged behind the combined Snohomish, Kitsap and Pierce County comparison point.

The team also looked at how many people working in Seattle at the beginning of the period were still working in the city at the end; they found a decrease of 3.3%. Some of the Council members speculated as to what might be causing that, with many fingers pointing to the affordable housing crisis forcing many low-wage workers to move farther out — and then potentially finding jobs closer to their new homes.

What happened to employers? The research team found that business closings increased slightly in Seattle. On the other hand, new business openings also increased, and more than compensated for the closings. Again, in the absence of a clear explanation from the data, there was much speculation for the increased “churn.” It’s entirely possible — though far from proven — that business owners might be shifting from labor-intensive businesses to capital-intensive ones.  The team will take a harder look at industry segments in a future report, which will shed more light on what’s happening.

So what are the big conclusions from this report on the first phase of the minimum wage increase? In a year when the economy was booming in Seattle, the first bump up in the minimum wage provided a modest boost to low-wage earnings with minimal drag on other economic factors.  That’s in line with what most economists predicted. But that finding on its own is of little value in trying to predict what the future incremental increases will do, nor does it help us understand what effect an increase during a flat or declining Seattle economy might have. We know that the sky isn’t falling, but one data point isn’t a trend and we don’t know what the future holds.

The good news is that the research team will continue to work on collecting and analyzing data for several years (so long as their funding holds up). So we can expect regular reports. In September they will publish their finding on nonprofits. Later in the fall they will release a report based on a merging the employment data with social services data. And they will be conducting follow-up surveys with both employers and workers to gather more qualitative data to help with interpretation.