Yesterday morning the Council had its first substantive discussion on the merits of the bill introduced earlier this month to rewrite the city’s protocol for clearing unsanctioned homeless encampments. While yesterday’s meeting was intended to be just a forum for discussion with no decisions, it nevertheless highlighted just how much work needs to be done on the details of the bill before it’s ready for adoption – and how unlikely that work will be finished before the Council’s self-imposed deadline of the end of the month.

It’s worth reviewing the context of this bill. At the moment there are three separate debates happening within the Council related to the homelessness crisis. First, there is the discussion of the long-term plan to solve homelessness and get people off the streets back into housing. Second, in the absence of available housing today for the 3000 unsheltered people in Seattle, there is a debate on how to deal with the unsanctioned encampments all over the city. Third, there is a pointed discussion about the largest and most dangerous unsanctioned homeless encampment, known as the “Jungle” (though others prefer to call it the “EDGE”). If you’re having trouble tracking these discussions, you’re in good company: there have been hearings on all three this month, and pending legislation on the two related to unsanctioned encampments (though the bigger strategy for solving homelessness will be a major focus of the 2017-2018 budget discussions next month).

No one on the City Council, and few residents of the city, are happy with how unsanctioned encampments are being dealt with. Mayor Murray’s administration, following a set of rules developed years ago, has been “sweeping” those encampments that have been the subject of complaints from nearby residents and businesses. While they make a certain effort to offer emergency shelter space to the displaced people living in the encampments, the offer often doesn’t meet their needs or the shelter won’t accept them, so in effect the encampment sweeps simply bounce the homeless around the city. That makes the Council members and the collective body of homeless advocates unhappy with the Mayor. It also makes the residents and business unhappy because in many cases a few days after an encampment is swept the homeless people return. So while the current protocol isn’t working for everyone, the Mayor has paid lip service to reforming it while in practice simply continuing with business as usual.

This came to a head in August when the ACLU, Columbia Legal Services, and a handful of Council members started drafting an ordinance that defines a new protocol for clearing encampments. The new rules specify the conditions under which the city may clear an encampment and several steps (including advance notice, outreach, and safely storing possessions) that must happen first. Notably, a camp may not be cleared unless the city has either suitable housing or a suitable alternative encampment to move each displaced person to. In the middle of August, as a pre-emptive move Bagshaw and Murray co-created a task force comprised of stakeholders to review and recommend changes to the sweep protocol. Interpreting that as just one more delaying tactic, the ACLU and CLS announced their draft bill the following week and on September 6th Council members O’Brien, Herbold, Johnson and Sawant formally introduced the bill. Bagshaw, who clearly didn’t want that to happen as it would undermine her authority and force her hand, negotiated one compromise: the bill would be referred to her Human Services and Public Health committee. In return, she promised it would emerge from committee in a form the full Council could adopt by the end of September.

So far this month, Bagshaw’s committee has been tied up with the release of two consultant reports on the city’s homeless response, the rollout of the Mayor’s Pathways Home initiative adopting most of the consultants’ recommendations, and a separate resolution granting the Mayor permission to finish clearing out the Jungle. Thus it has taken until yesterday, September 22nd, to finally bring up the bill for consideration.

Bagshaw began the discussion by noting that the primary emphasis for the city – and the bulk of its resources – need to be focused on the long-term strategy to solve homelessness. But the Pathways Home plan will take between 18 and 24 months to roll out, which leaves a “gap” in which there will continue to be a large number of homeless people living in unsanctioned encampments. She sees the bill as one component of Seattle’s “gap plan” for coping with the short-term situation, one that sets rules for treating homeless people humanely and with compassion, creates spaces for people, but allows the bulk of the work to be on the bigger systemic change. “Better” is a word commonly invoked to explain the short-term plan: in the absence of a way to make things perfect, we can make them better. President Obama is often quoted as saying “I’ll take better any day.” And Bagshaw frequently says “Better is better.”

So with that, the Council dug into how to make unsanctioned encampment cleanup processes better. There has been much talk over the last month of the perceived overreach of the ACLU/CLS proposal, in particular the restrictions it places upon city personnel (including SPD and SFD), and the extent to which it creates a right for people to camp on city property including sidewalks, school grounds, and parks. Much of that criticism was unfounded, at least as to the intent of the proposal, though it did point to problems with the language of the bill in several places where it could be construed other than as intended. In response, ACLU and CLS created a chart to summarize the different situations that unsanctioned encampments present and their proposed process for the city to follow for each of them. 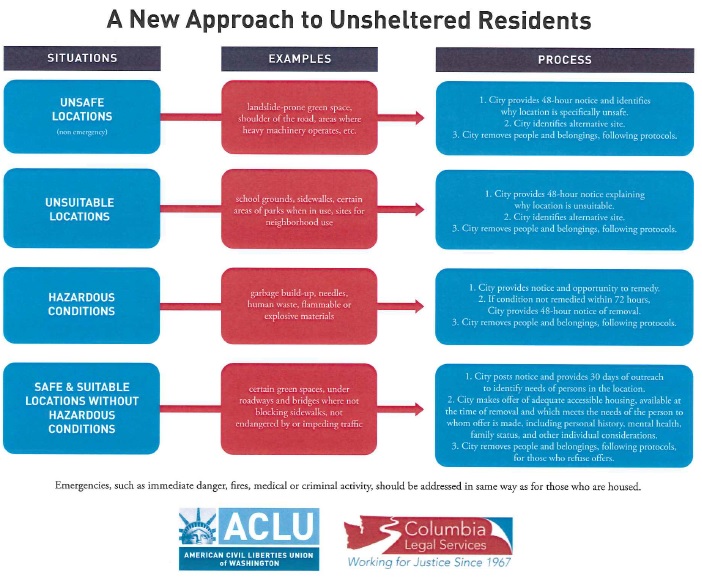 With that clarification, the Council dove into the salient points of the ordinance and the thirteen separate “decision points” that their staff had identified for them to consider.

The first set of questions related to the definitions of different classes of encampments in the ACLU/CLS taxonomy:

“Safe” and “suitable” turned out to be difficult terms to define. Council member Herbold asked the group to stop using the term “safe,” as she believed that living outdoors is not safe. “Suitable” and “unsuitable” became tricky as well; it’s easy to list cases that are unsuitable, but if by extension all locations that are not “unsuitable” are then termed “suitable” has huge implications – bringing the conversation back around to whether the bill creates a de facto right for people to camp on all city property that isn’t deemed either unsafe or unsuitable. They concluded that the intent of the ordinance should be to answer “no,” and in fact to explicitly allow for the city to remove homeless people from suitable locations as well – but only if there is a real offer of “adequate, accessible housing” or an alternative suitable location. But the devil is in the details: several Council members wanted to place the bar very high on what alternative housing might suffice. Council member O’Brien argued that if someone is camping in a suitable location and is offered a space in a 24-hour shelter that isn’t “low barrier” (meaning it might not accommodate all their possessions, or their pet, or their mental health issue) and the person refuses, the city should not remove them from their current suitable site. And that led to a digression (a frequent one) on the long list of criteria for a “low barrier” shelter: 24-hour, pets, possessions, partners, the “right to return,” etc.

Another set of issues relate to notifying people in advance of their encampment being cleared. O’Brien characterized the current practice as “the cable guy rule” wherein the notice lists a large window of time in which the actual clearing might happen, and in practice the city often doesn’t show up until after that time. That leaves homeless people not knowing when they need to be there to get assistance moving or to protect their possessions. O’Brien argued forcefully that the city needs to be much more rigorous about setting reasonable window s of time for clearings, and actually living up to those commitments.

Another important area of discussion was the requirement to provide basic sanitation and harm-reduction services to encampments, and what the threshold or trigger was for when it needed to be provided. There was general consensus that it should be provided in many cases, but no specific proposals on what the trigger should be.

The proposed bill requires the creation of a new advisory committee to provide community input into implementation of the new protocol. Bagshaw complained that there were already five standing committees related to homelessness so she was unenthusiastic about creating another She also noted that now George Scarola is in place as the Mayor’s homelessness response czar, she would like to get his input as to what would be helpful. O’Brien pointed out that community input needs to be at the neighborhood level, since each neighborhood is unique and has different ideas about which locations are suitable, unsuitable, or otherwise have a unique role in the community and are thus inappropriate for encampments.

The ordinance’s imposition of penalties against the city for violations took heat from Bagshaw. She pointed out that the financial implications are daunting. Herbold wondered whether it could be limited to cases where personal property is destroyed, but Bagshaw countered that she didn’t want to turn encampment clearings into “financial debates” every time someone claims that their wallet or other possession was thrown away. Herbold agreed that it shouldn’t punish people for making mistakes and suggested that the standard should be high; Baghsaw suggested that more community input was needed. Harrell suggested that they might want to allow some kind of financial liability against the city for garbage cleanup; the city makes property owners pay to clean up graffiti on their buildings, so it should be held to its own standard.

Finally they took up the question of whether there should be a “sunset” clause on the ordinance, so that it goes away at a future point in time when the long-term homeless response has finally spun up. There seemed to be a general consensus that a sunset clause was appropriate, with Bagshaw leading that charge.

It will take a heroic effort for Bagshaw and her Council colleagues to sort through all of those issues by the end of the month and arrive at a finished bill ready to be adopted. The issues they have identified require detail and nuance, and many stakeholders will have strong opinions.  Bagshaw’s committee meets again next Wednesday afternoon to continue trying to push this through to a conclusion. n the meantime, if you were thinking that the task force surely was doing better than this… think again.