This afternoon, the City Council had its first discussion of the near-final Pedestrian Master Plan in the Sustainability and Transportation Committee.

This is the first major update to the Pedestrian Master Plan since 2009. SDOT released a draft version of the plan last July, and since this is Seattle there was a lengthy and voluminous public engagement process. 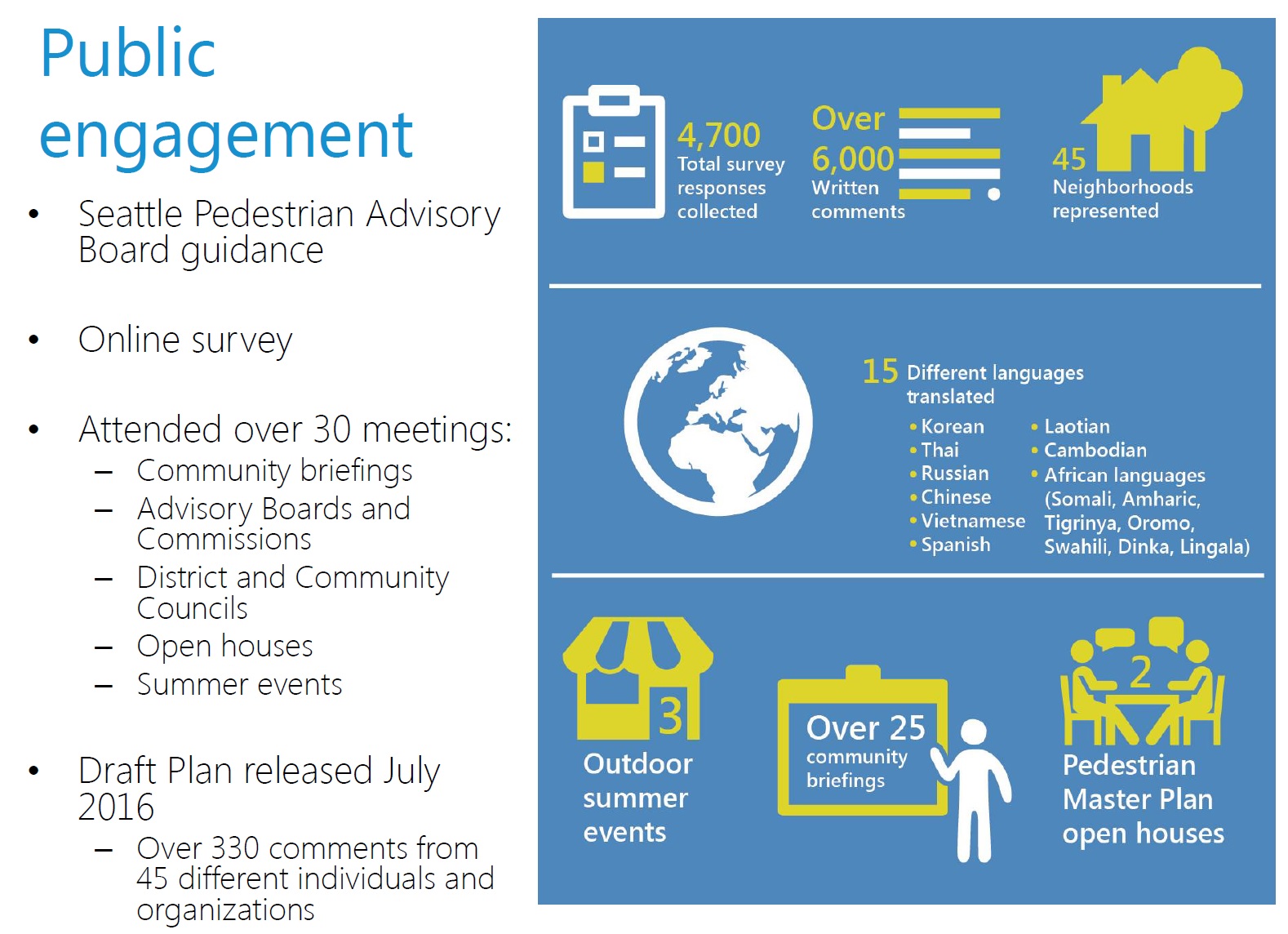 Now the feedback has been incorporated into the plan and the department has submitted its final version to the Council for adoption. The Council could send it back for more work; it’s unlikely to do that, though, opting instead to write a bill that adopts the plan but also specifies some priorities for implementation. Once the Master Plan is adopted, SDOT needs to create an implementation plan that will receive annual updates.

The plan itself is 134 pages; it also comes with 270 pages of appendices.

SDOT Director Scott Kubly told the Council that the public feedback led them to focus changes on five areas:

The public also asked them to be realistic about the funding outlook for projects, and to include performance measurements and goals in the plan so that it will be clearer whether implementation of the plan is improving things. To that end, the plan includes six performance targets: 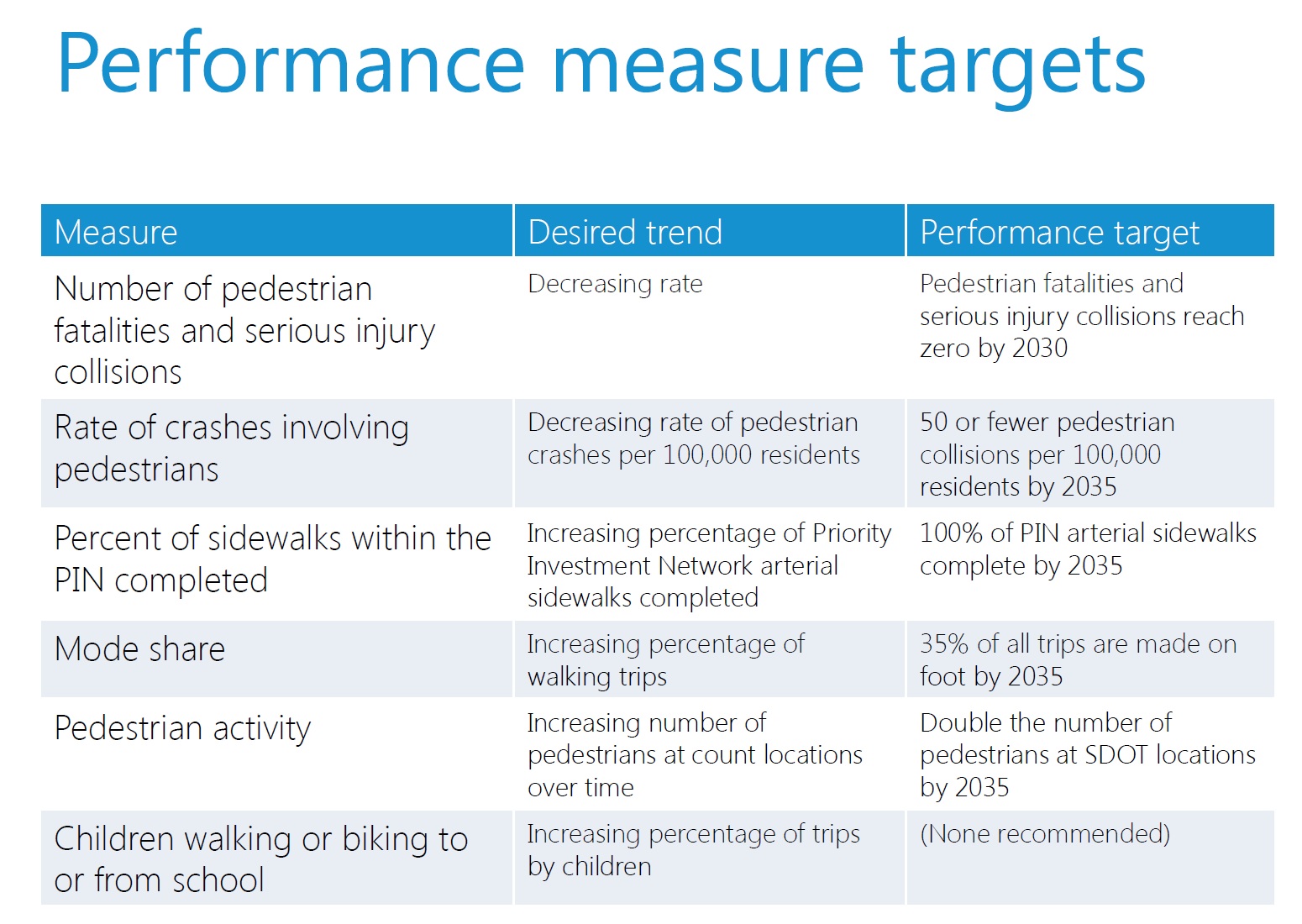 Core to the plan is the Priority Investment Network (PIN), which identifies arterial and non-arterial streets without sidewalks and sets priorities for adding, repairing, and maintaining sidewalks based on the five areas above: streets, transit stops, busy arterials, dangerous intersections, and residential areas. 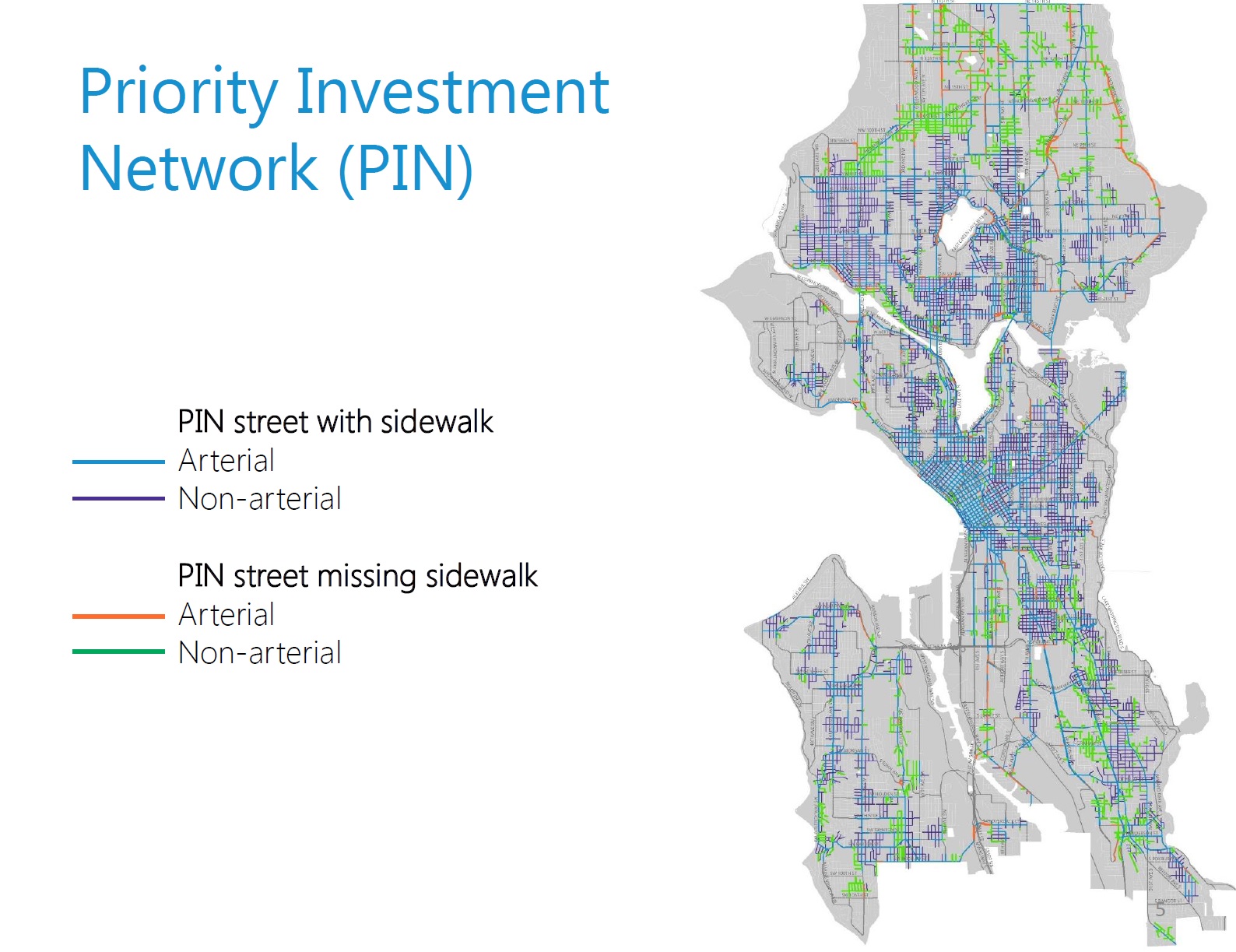 The PIP is also aligned with the city’s Transit Master Plan, so as to ensure good connections to transit centers and safety improvements where the transit plan will make them necessary. 72% of the city’s arterial streets, and 46% of non-arterials, are included in the PIP.  15% of the block faces in the plan are currently missing sidewalks. This revision of the plan doesn’t expand the PIP from the 2009 version, focusing instead on continuing to make improvements to the existing one.

Council member Rob Johnson had much to say about the plan, starting with the performance goals. He said that it was personally “heartbreaking” if it really took another 18 years to get sidewalks on 100% of the arterial streets in the city. He also pushed SDOT to explore lower-cost solutions that might stretch the budget farther and get more projects implemented sooner (SDOT said they were already looking at this).

There was much talk about sidewalks. The Council members have been hearing frustration from residents who have requested SDOT to add crosswalks on busy streets but have been told that people aren’t trying to cross at those locations — a wonderful catch-22. Johnson reiterated his belief that crosswalks follow the “if you build it they will come” rule, and encouraged the city to look at cost-sharing models with the community for installing crosswalks so that as part of fundraising the community participates in prioritizing the most important sites. There was also talk of building an equity program around that, where if a community wanted to add a crosswalk it would be asked to raise twice as much money so that another one could be added in an economically disadvantaged part of the city at the same time.  Council member Bagshaw asked the Bicycle Advisory Board members to look at what Pasadena, CA has done with its bicycle program.

In the meantime, the city is working on a sidewalk condition assessment, which is expected to be completed this summer and will feed into the first annual version of the implementation plan due by the end of the year.

The S&T committee will take up the Pedestrian Master Plan again on May 2nd, and like recommend its adoption to the full Council along with a statement of its priorities for implementation.