Earlier this week, the city released its draft Environmental Impact Statement on the proposed renovation of Key Arena by the Oak View Group. The document is 321 pages, with another 306 pages of appendices. Here’s a guide to what it says, and how you should let the city know your thoughts.

Also, we learn what a “woonerf” is.

First, some context: the state Environmental Protection Act (aka SEPA) requires that development projects expected to have a significant impact on the environment go through a public review and comment process before the project is approved by the government. That process involves publishing a draft Environmental Impact Statement (DEIS), followed by a public comment period, which in turn is followed by revising the DEIS and issuing a final EIS which becomes the basis for approval or denial of the project (and, often, lawsuits).

Earlier this year the city sought comments on how to scope the DEIS; the comments they received are summarized here. Now that the DEIS has been published, there will be an open house and public hearing on May 14th starting at 6:00pm at the Seattle Center Armory building. The city is also accepting written comments until June 7.

Despite the title “environmental impact,” SEPA actually requires EIS documents to look very broadly at potential impacts arising from the project — though it only needs to include the significant ones.  This particular DEIS reports on impacts to:

It does not consider potential impacts to water, energy and natural resources, animals, or environmental health (except for noise).

EIS documents also present at least two alternatives for a project in order that we might compare them side-by-side: the proposed one, and a “no action” alternative predicting what will happen if the project is not undertaken. Understanding the “no action” alternative is useful because it points out environmental changes that are outside the control of the project, for example traffic continuing to worsen in an area due to population growth.  In this case, the DEIS presents three alternatives: “no action;” “alternative 1,” the OVG plan as originally proposed, and “alternative 2” which tweaks various aspects of the project. Before we dive into the details of alternative 1 and 2 and what the DEIS tells us about their impacts, it’s important to understand that “alternative 2” is not a package deal that must be chosen in its entirety; rather, at this stage it’s an “a la carte” menu of ideas that could be considered and adopted independently as modifications to alternative 1.

The “no action” alternative leaves Key Arena and its surrounding buildings intact. 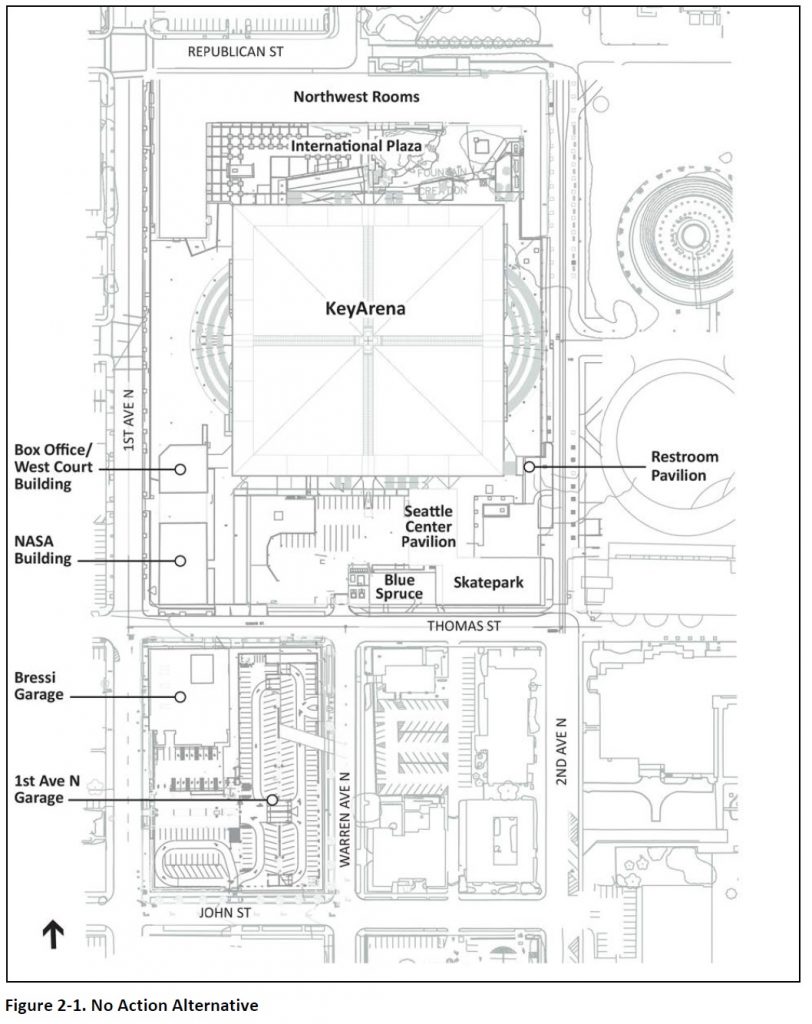 Alternative 1 is the OVG plan, which includes: 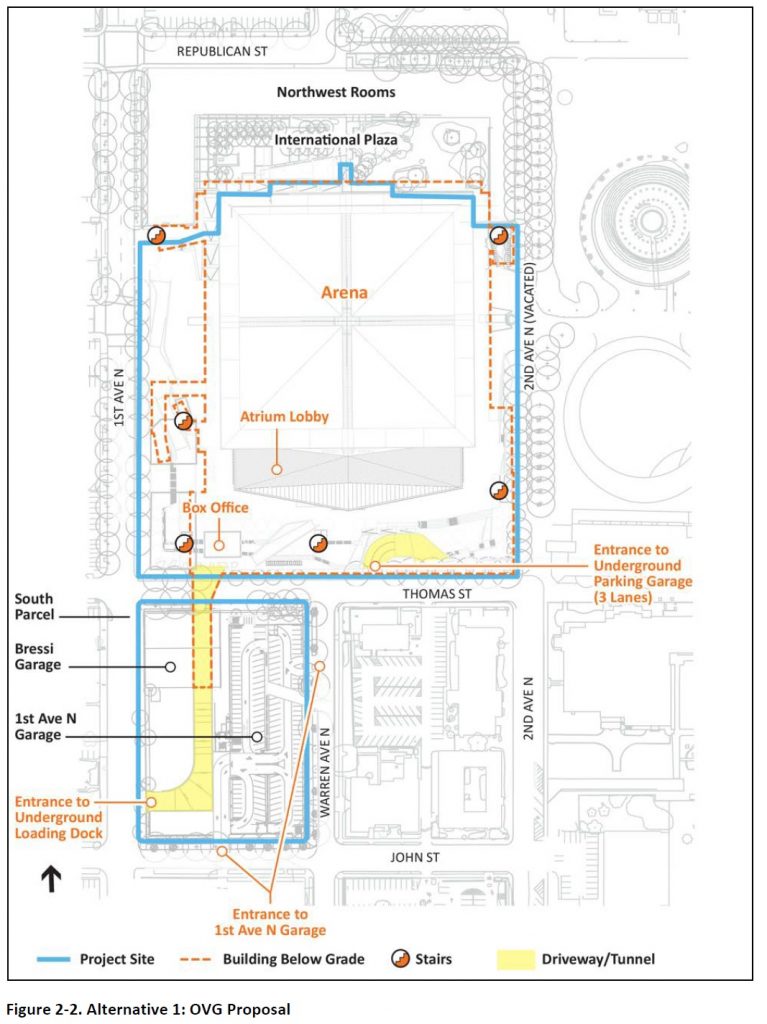 Alternative 2 is mostly the same as Alternative 1, except for these changes: 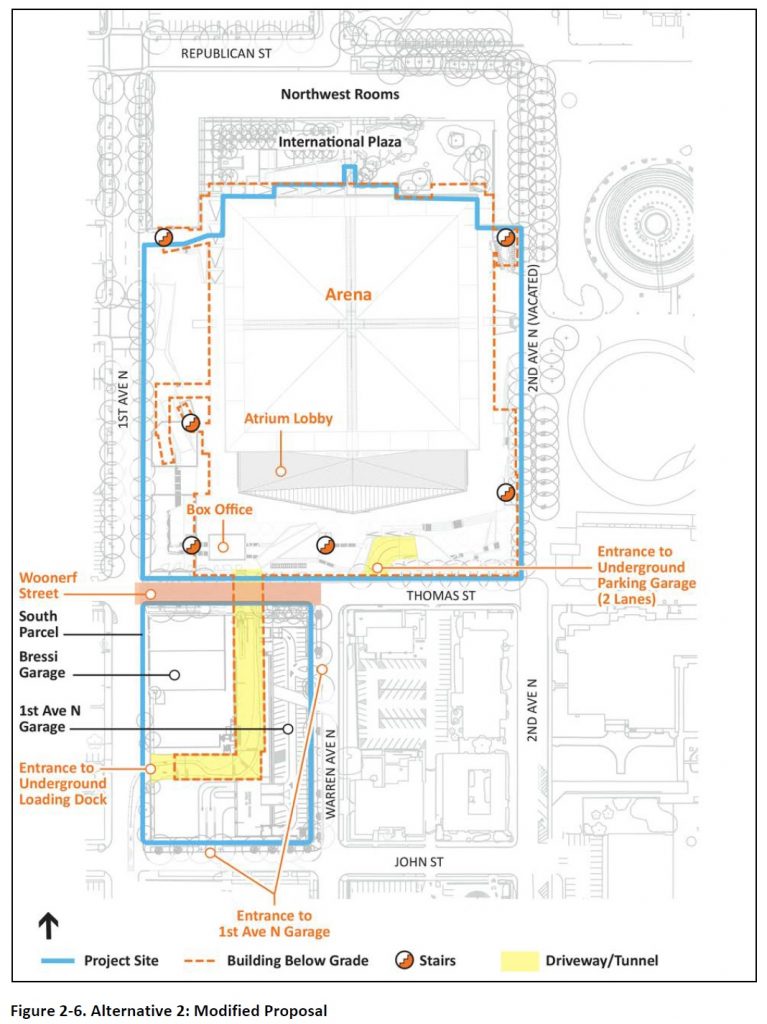 Many of the impacts we knew about already, or could have deduced, from OVG’s earlier announcements of the design for the renovated Arena (i.e. its original plan, “alternative 1”). Those include:

The two alternatives for construction pose interesting tradeoffs. Under the original “alternative 1” plan, truck hauling would be up to 18 hours a day, 7 days per week, for the first six months, during excavation and demolition (though not during peak hours); that’s up to 290 truck trips per day.  Under alternative 2, truck hauling would be 8 hours or less per day, likely between 8:30am and 3:30pm, 7 days per week, but would extend for the first twelve months as excavation and demolition would take longer.  And by adding six months to the first phase, alternative 2 also pushes the project completion date out at least to February 2021.  The community and the city’s leaders will need to make some difficult choices between maximizing pain to minimize the time, or vice versa.

But of course the big impact, and the one everyone will undoubtedly focus on the most, is transportation. The DEIS rightfully goes into excruciating detail in its examination of this area, and particularly focuses on two (admittedly related) areas: vehicle congestion on roadways and in intersections, and parking.  It lays out the current situation for both, and then projects out what will happen under all three alternatives in 2020 when the new arena opens, and again in 2035 after several new transit projects complete that are expected to contribute to easing vehicle traffic loads.

Transportation impact analysis is all about quantitative comparisons. But what’s important to remember is that the most useful comparison is not between the current situation today and alternatives 1 and 2 in future years. Instead, we need to compare the alternatives with what the “no action” alternative suggests the future will be like, since a myriad of factors will continue to shift the landscape for vehicle traffic in and around Seattle Center independent of the Arena project. That includes (as the DEIS points out) the “reknitting” of surface streets once the new SR99 tunnel opens, and the opening of a light rail station at Seattle Center in 2035.

Let’s look at parking first. Currently there are 8,229 public parking spaces in the “study area” around the arena and Seattle Center. 62% of those are in off-street lots and garages. On a typical weekday evening where there is an event at the current Arena, there is about 33% utilization of the existing parking; that figure is about 44% for weekend events. 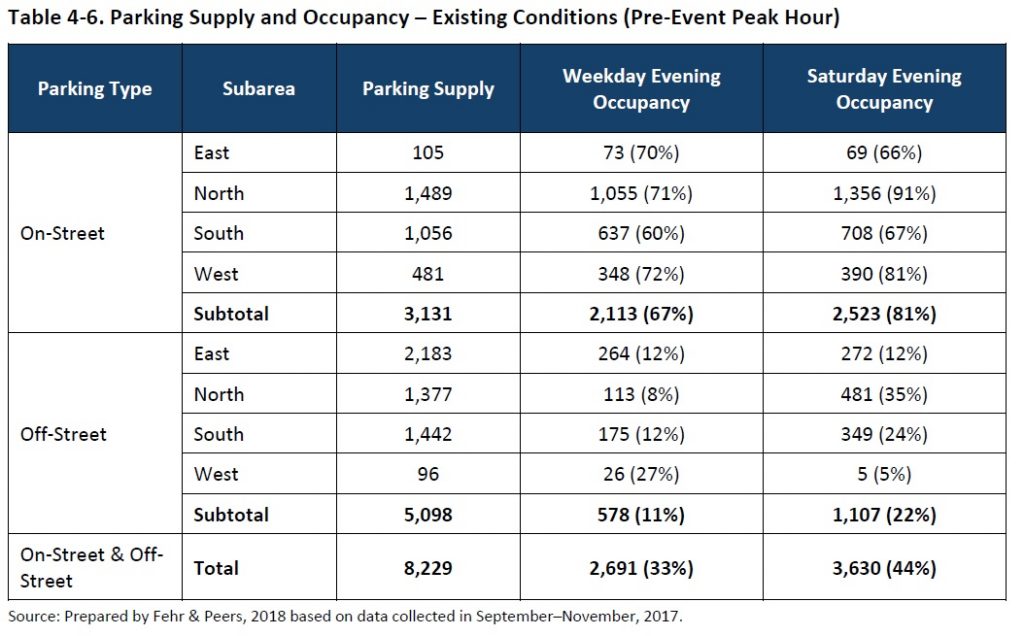 For 2020, the city predicts that the “no action” scenario, which really means “no NHL or NBA team,” continues to yield an occupancy rate of about 33% on weekdays and 45% on weekends. But alternatives 1 and 2 (which imply Seattle lands an NHL team) see a significant jump in utilization; in alternative 1 it’s 82% on weeknights and 92% on weekends. In alternative 2  — remember, it has 450 less parking spaces — it’s even higher, as one would expect. 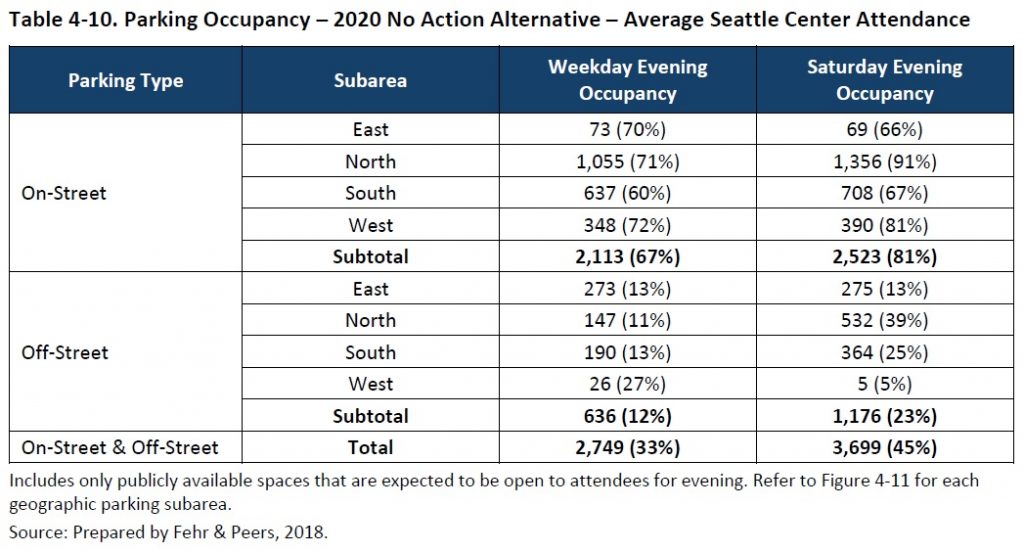 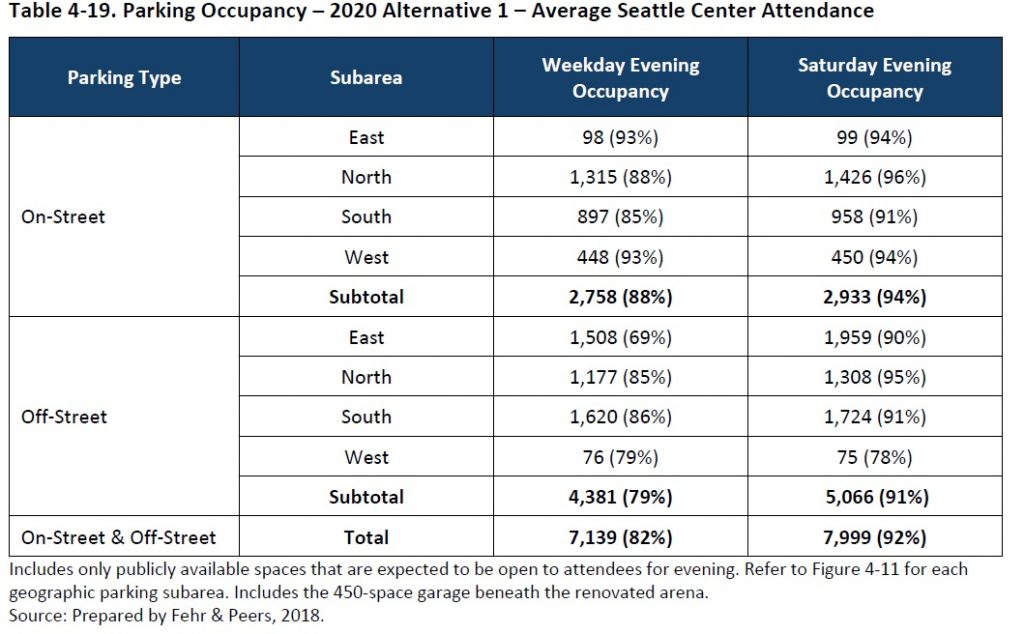 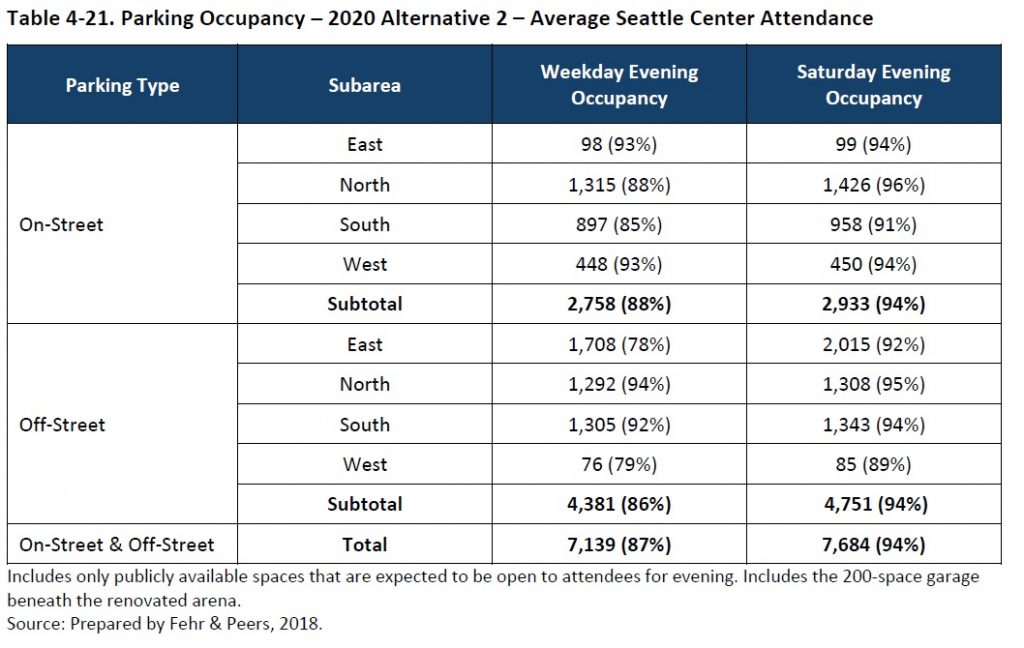 But the numbers look very different in 2035. That’s because the city expects the opening up of a light rail station at Seattle Center to dramatically change the “mode share” of how people travel to events at the Arena. 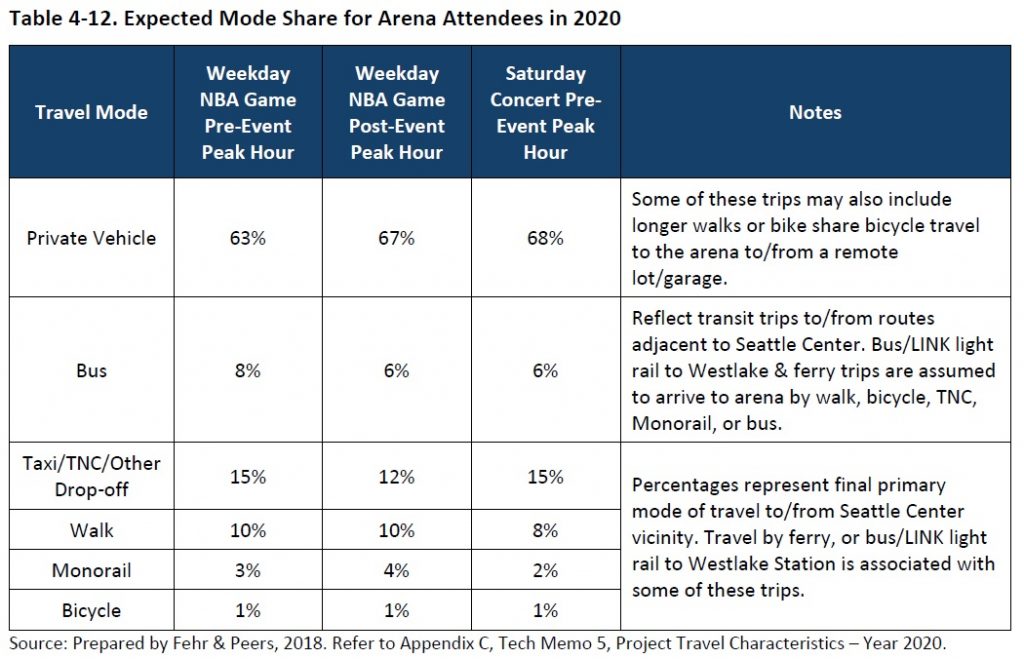 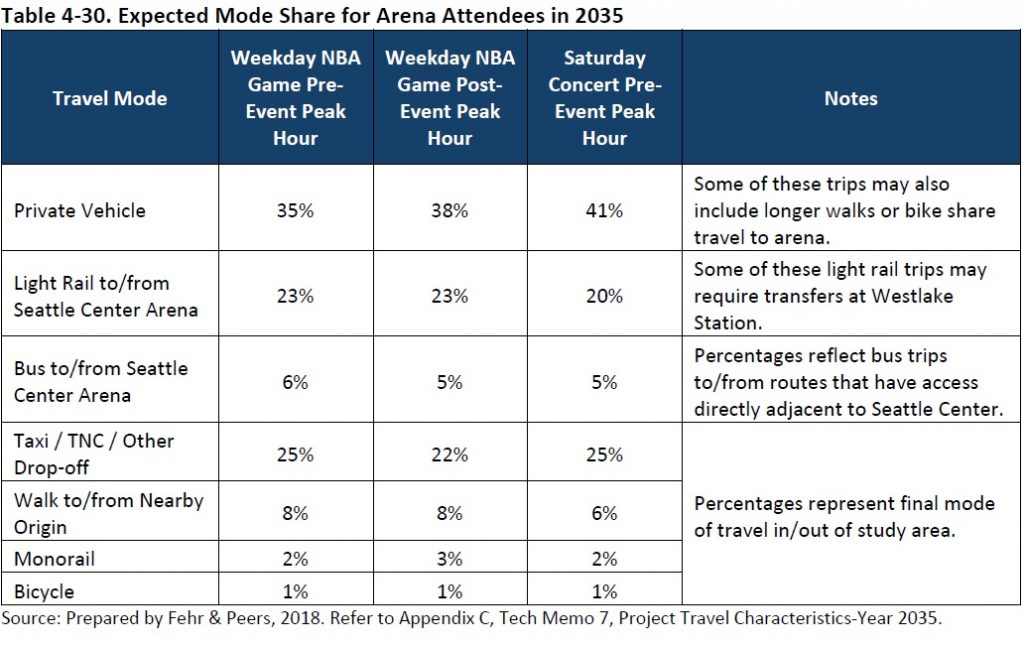 They predict that light rail will serve 20% of the trips, taxis and TNCs will be much more popular, and private vehicle use will drop from 68% of trips down to 41%. Here’s what that does to parking utilization: 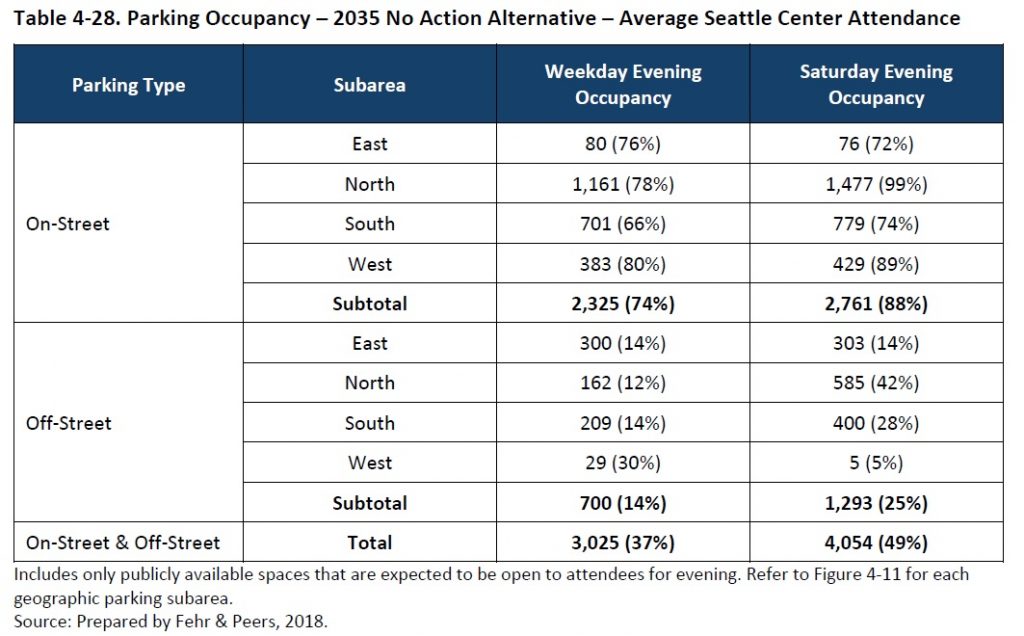 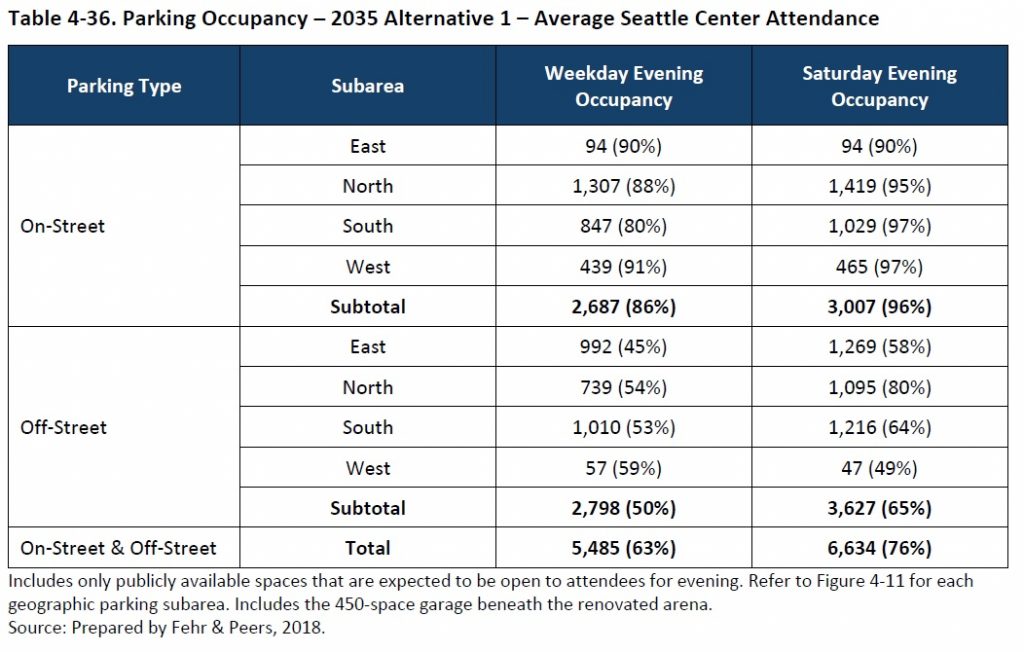 The city predicts that alternative 2 will have essentially the same parking occupancy rates as alternative 1, because the demand for off-street parking stays relatively low.

So if you believe the city’s numbers, the message is that cutting 450 parking spaces in alternative 2 will cause short-term pain as demand approaches peak capacity, but by 2035 it won’t matter because demand for parking will drop. What they don’t say, though, is that it isn’t a steady drop in parking demand between 2020 and 2035; it’s a small gradual reduction attributed to TNCs, and then a huge change in 2035  when the new light rail station opens up that year. If it’s on schedule, that is — a big question. In any case, under either alternative 1 or 2 (but especially 2), there will be 15 years of parking pain before the light rail brings relief. The Shoupistas in the audience will say that adding more parking will simply encourage more people to drive, which also adds to traffic congestion headaches around the Seattle Center. I won’t take sides in that particular battle, but expect it to be a heated one as the DEIS is debated around town.

Nevertheless, we should look at what the arena project is likely to mean for traffic congestion. First, the DEIS suggests that alternative 2 will slightly reduce the traffic congestion in the immediate vicinity of the Arena because it reduces off-street parking in the closest garages; that’s probably true. But the bigger impacts are the choke-points: major intersections around Seattle Center, and the Mercer and Denny corridors.

SDOT grades “level of service” at intersections on a six point scale from A (best) to F (worst). In the DEIS it predicts conditions in 2020 and 2035 at 70 intersections in the area to give an overall picture of how congested things are likely to become. They have maps showing the individual ratings, but you can get the “big picture” from the histograms they provide of intersection ratings: 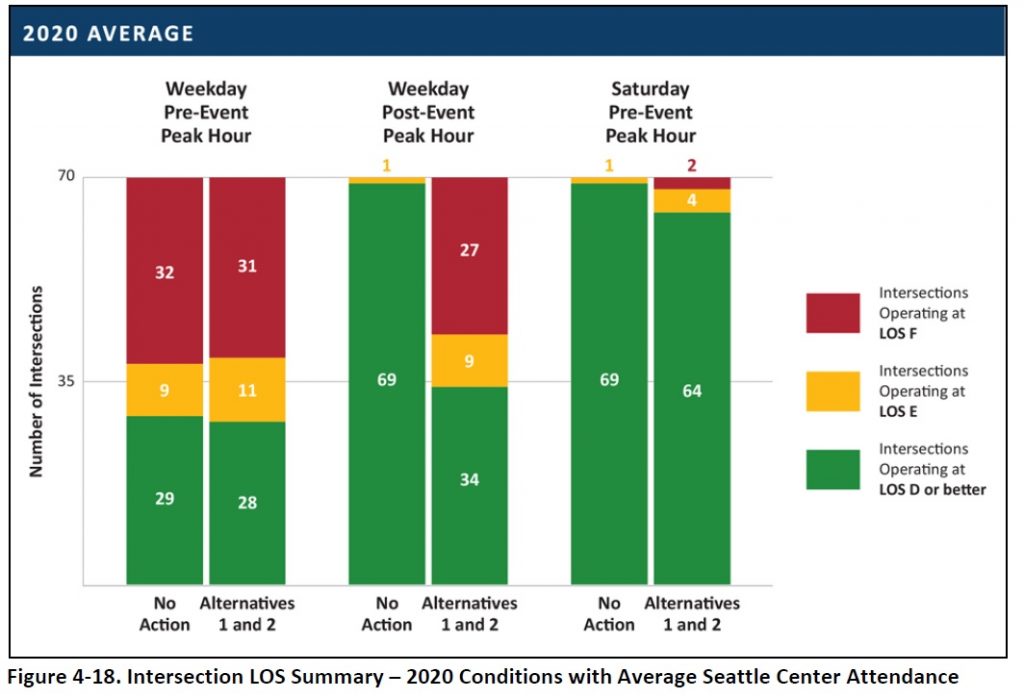 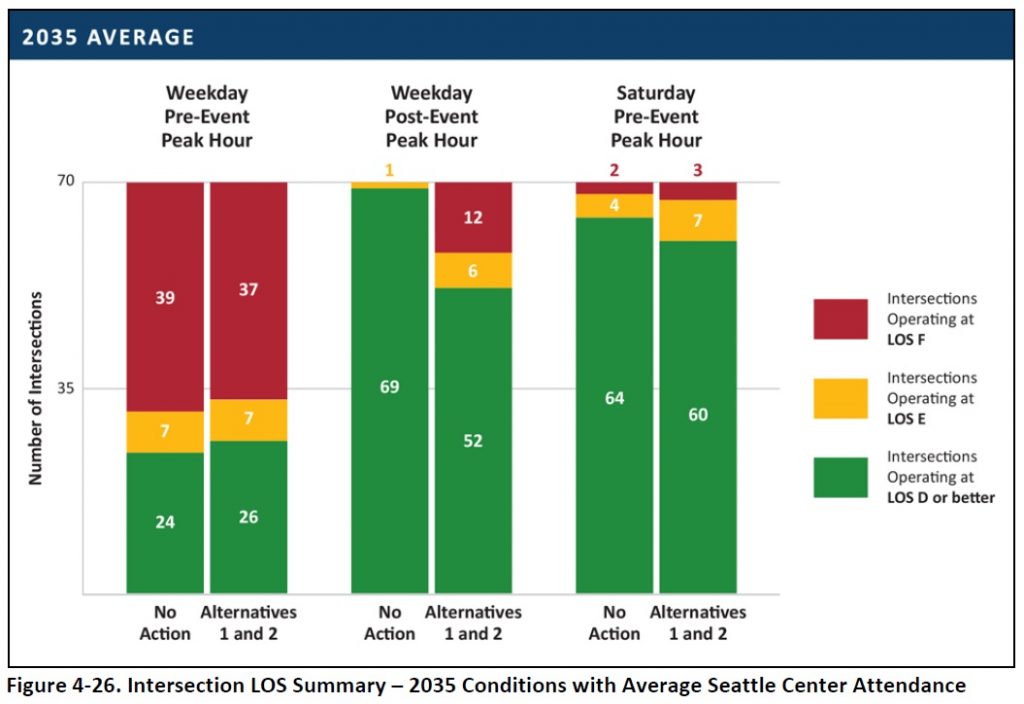 The picture looks bleak for travelling to an event at the arena on a weekday evening: it sucks around Seattle Center today, it will suck in 2020, and it will continue to suck in 2035. Also, as expected, building the new arena (and hosting an NHL team) will make the post-game traffic miserable in 2020. But the small consolation is that by 2035 the post-game crush should be substantially eased on weeknights — again, because of the new light rail station.

The city also looked at flow and speed along several major traffic corridors, and what is likely to happen with a new arena. 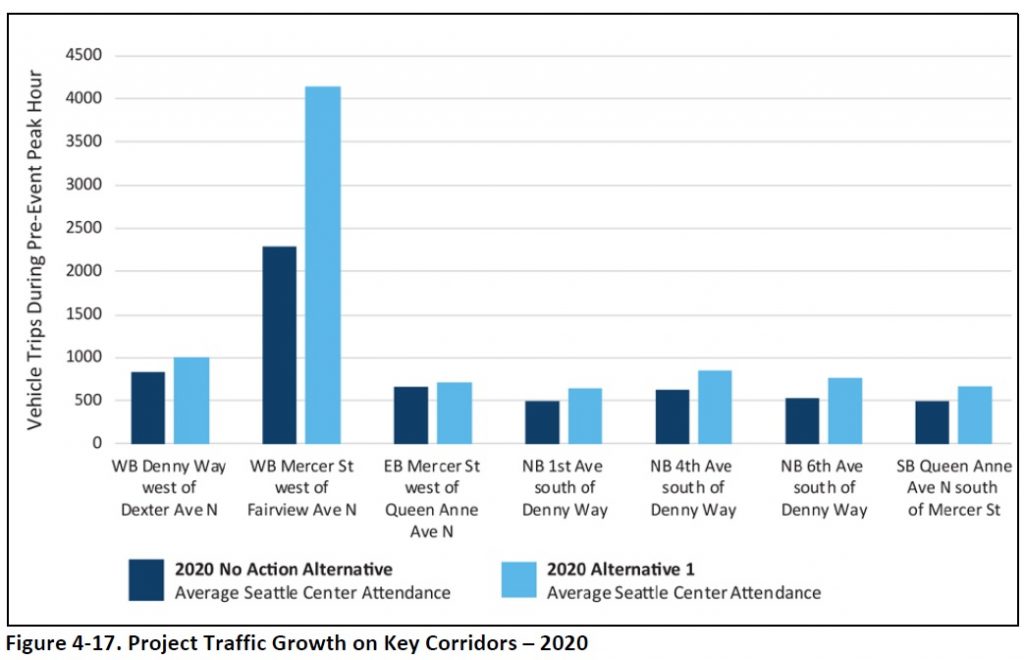 Obviously having major events on weekday nights pushes a lot more traffic westbound on Mercer. But the extent to which more traffic is a problem is really a question of the capacity of those corridors, so the city looked at the two key ones: Mercer and Denny. Here’s 2020:

Westbound Mercer and Denny flows pretty freely even during evening commutes today; the real backup is eastbound leading to the I-5 onramps (and the new arena isn’t expected to make that worse). The city predicts that a big arena event will halve the speed of westbound traffic along the corridors; that’s a big change, but it will still be far better than the  eastbound traffic backup.

Somewhat surprisingly, though, the mode-share change in 2035 isn’t expected to provide any relief for westbound traffic to the arena; in fact, it’s predicted to degrade even further.

So the short answer on transportation impacts is: there are no miracles in the plan that will make everything better. The light rail station in 2035 is the closest thing to a silver bullet; it will ease the parking crunch a bit, but traffic for weekday evening events will be just as unpleasant as it was when the Sonics were here a decade ago. And it will be particularly painful from 2020 to 2034, not to mention during the construction period itself. But even if the arena renovation is scuttled, traffic is predicted to get worse: more intersections operating below an acceptable level of service, and traffic flow along major corridors degrading. Again, the arena project won’t make the evening eastbound commute along Mercer and Denny worse; it will just make other things worse instead.

The DEIS also reviews transportation impacts on bicycles, pedestrians, buses, and other components of our multi-modal transportation netowrk; most of the impacts are minor, though there is some concern about how the increase in Uber and Lyft dropoffs and pickups will cause problems for pedestrians, bicycles, buses, and general traffic flow around the Arena. There are some mitigation steps suggested, including geofencing post-event pickups to disperse them around the area and away from the most congested places.

None of the other topic areas in the DEIS raise issues of significance; the main concerns are construction impacts; the fate of the neighboring buildings; relocating existing events, activities and tenants; and transportation. If you have thoughts on those topics, you should plan to attend the open house and public hearing on May14, and to submit your written comments to the city by June 7. All the details are here.

The DEIS notes that several members of the public wanted the draft EIS to evaluate the proposed SODO Arena as another alternative. The EIS writers chose not to do so, arguing that the objective of this EIS is to evaluate a renovation project for Key Arena, not to determine the best location for an NHL/NBA class arena in the city. Don’t be surprised to hear that objection raised again in the weeks to come, though it’s unlikely to find traction.

The city hopes to have the final EIS issued by the end of the summer.