This afternoon Council member Kshama Sawant introduced two bills: a resolution related to EMT wages, and an ordinance to save the Showbox. She wanted to get the resolution passed this afternoon and the ordinance next Monday, but the her colleagues on the Council had other thoughts.

The first is a resolution related to the EMT employed by American Medical Response under its contract with the city to provide first-responder ambulatory services. The current contract, which expires on August 31, has a general provision on the compensation that its EMTs must receive:

According to Sawant’s office, AMR pays its Seattle EMT’s $15.54 per hour. But the Bureau of Labor Statistics says that the national average for EMTs is $17.64 per hour, and the average for the Seattle metropolitan area is $36.34 per hour. Some other points of comparison:

AMR’s Seattle EMT pay is miserable compared to all of these areas. Plus, according to Sawant’s office their healthcare plan is substandard — not a desirable thing for a group of people who witness trauma on a daily basis.

If the average pay for EMT’s in Seattle is so high (actually, the highest in the nation, according to the BLS) then why is it so low for AMR? Because the company has “market power” — out of the 1190 EMTs in the greater Seattle metropolitan area, it employs 430 of them.

Nevertheless, AMR is violating its contract with the city; it is not offering a compensation package that is substantially equivalent to similar areas of the country. But the City of Seattle has not taken steps to enforce that provision of its contract with AMR.

AMR’s Seattle EMTs are represented by Teamsters Local 763, which is in the process of negotiating a new contract with AMR. Sawant’s resolution requests that the city carry forward into the new contract it is negotiating the same provision requiring a competitive compensation package for its EMTs, but also specifies that the rate should be no less than $25 per hour, and the benefits package should be comparable to Seattle Fire Department workers. It also requests that the executive branch provide the City Council with a draft of the new contract it negotiates with AMR before approval before it is executed.

Sawant’s intent was to introduce and pass the resolution this afternoon. However, today SFP Chief Harold Scoggins, who apparently hadn’t seen the bill before this morning and whose staff is negotiating the new contract with AMR, asked several Council members to hold the bill to understand the issues, including budget implications. AMR isn’t simply going to absorb a $10/hour increase in wages; that largely will get passed through to the city.

The other Council members expressed their general support for the resolution, but most of them wanted more time to work it through. Gonzalez, whose committee oversees public safety, wanted to give Scoggins the change to provide input. Herbold noted that AMR hasn’t received an increase in its Medicaid reimbursement rate in several years. Harrell raised the concern that with the contract expiration date so close, if the Council derails the negotiations by helicoptering in three weeks for the deadline, the city may be faced with a lapse in ambulance service come September.

In the end, the Council voted 6-2 to hold the resolution for a week over Sawant’s protests (Juarez was absent; Sawant and O’Brien voted against holding it).

Sawant made a big deal today out of the fact that the city isn’t enforcing the competitive compensation provision of the existing contract; however, her resolution doesn’t press the city to enforce it, nor does it request the new contract to create any new enforcement mechanisms. Expect that, and other changes, to be put forward as amendments next Monday when the resolution comes back up for a vote.

The second bill that Sawant introduced today is an ordinance attempting to “save the Showbox” by extending the boundaries of the  Pike Place Historical District to include the building. That would put both the structure and use of the site under the control of the Pike Place Historical Commission, which must approve all construction, remodels, and new businesses within the district. The commission could deny the tear-down of the Showbox and the building of a new 440-unit apartment tower as developer Onni has proposed. Onni has submitted the Showbox to the Landmarks Preservation Board for consideration, but the board has rejected the building before because of substantial remodels in its past; even if it did approve landmark status, that would only protect physical aspects of the building and would not protect its use. The Historical Commission, on the other hand, gets to approve uses as well.

Sawant is looking for a quick solution, because according to the Department of Construction and Inspections (SDCI), Onni’s development proposal could become “vested” under the current laws and restrictions for the site within the next few weeks, so the opportunity to make a meaningful change to those rules is short. This is exacerbated by the fact that the Council is about to recess for two weeks. So she proposed introducing the ordinance today, referring it directly to the full Council (skipping the committee process), and voting on it next Monday.

But once again, Sawant’s colleagues didn’t feel comfortable rushing it through. Johnson in particular felt strongly that extending the historical district deserves more than just one Council meeting, and pointed out that Sawant’s proposal for extending the historical district boundaries captures several buildings, not just one. Sawant countered that she would have been fine with just extending the boundaries for the Showbox, but that city staff had told her that the Historical Commission had already been receiving inquiries over the past few years for extending the boundary to include other properties. 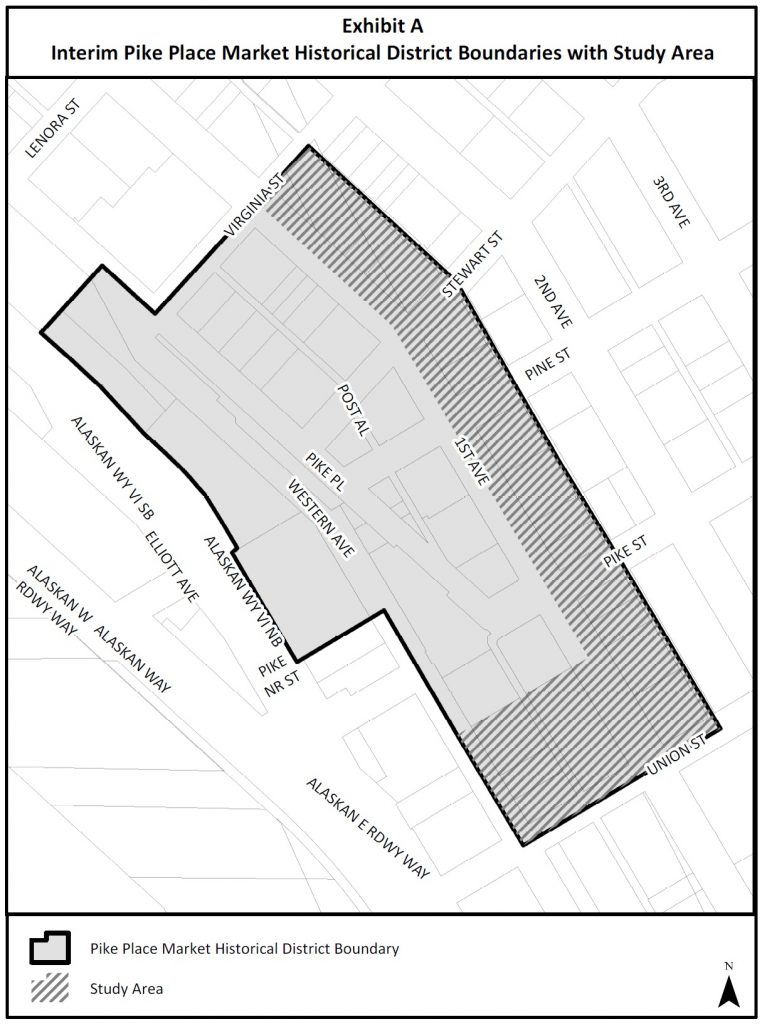 In fact, it expands the area by over 50% by adding an “interim study area,” to “allow the City to consider whether and to what extent to expand the boundaries of the District.” The study area boundary expansion would expire after two years if it isn’t made permanent.

The ordinance also notes that the Historical District ordinance is legislation that is not subject to the referendum process. For Sawant, this is a benefit: it allows for potentially putting a halt to the demolition of the Showbox without a chance for voters to suspend it. But to many of her colleagues, it’s one more reason to walk the bill through slowly to ensure that they don’t overreach.

The Historical District was formed in 1971 by voter initiative. After years of slow decline, Pike Place Market had seen better days, and as part of an urban renewal project it had been proposed to tear down much of the Market, architect Victor Steinbreuck organized the campaign to “Save the Market” that led to the vote and the subsequent creation of the district.

But a close reading of the ordinance creating the Historical District raises questions about whether the Showbox fits in with the vision of the Market as it was intended to be preserved: 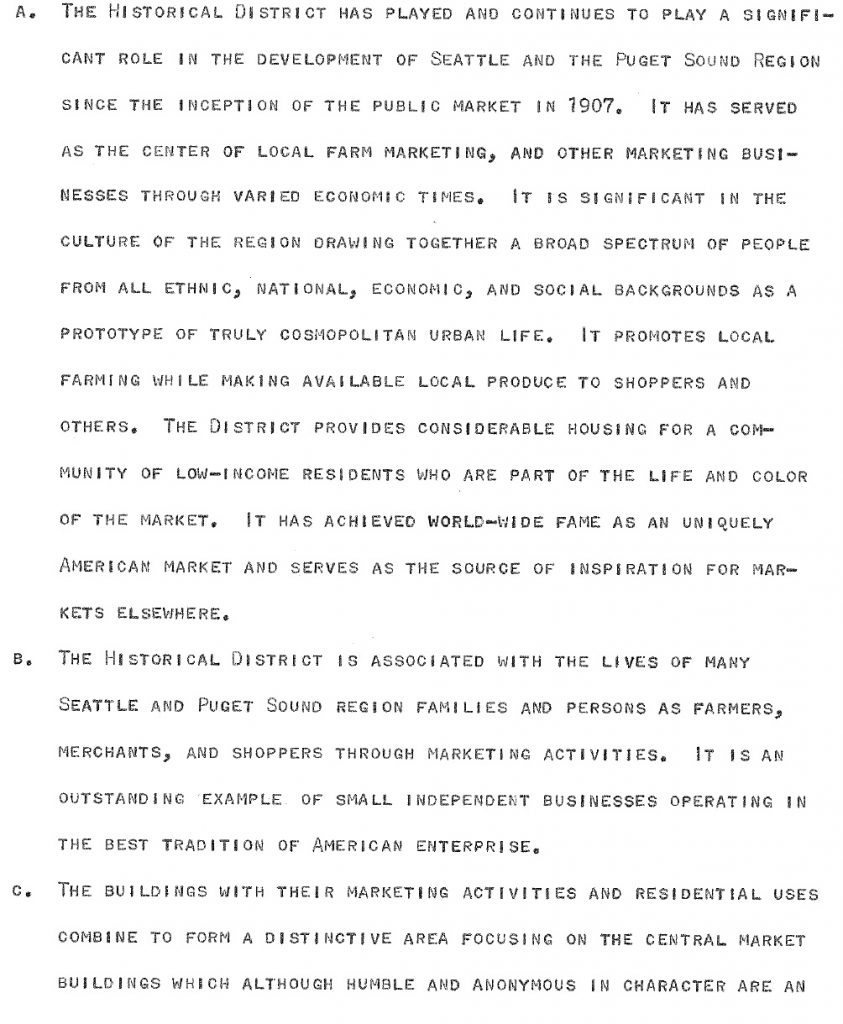 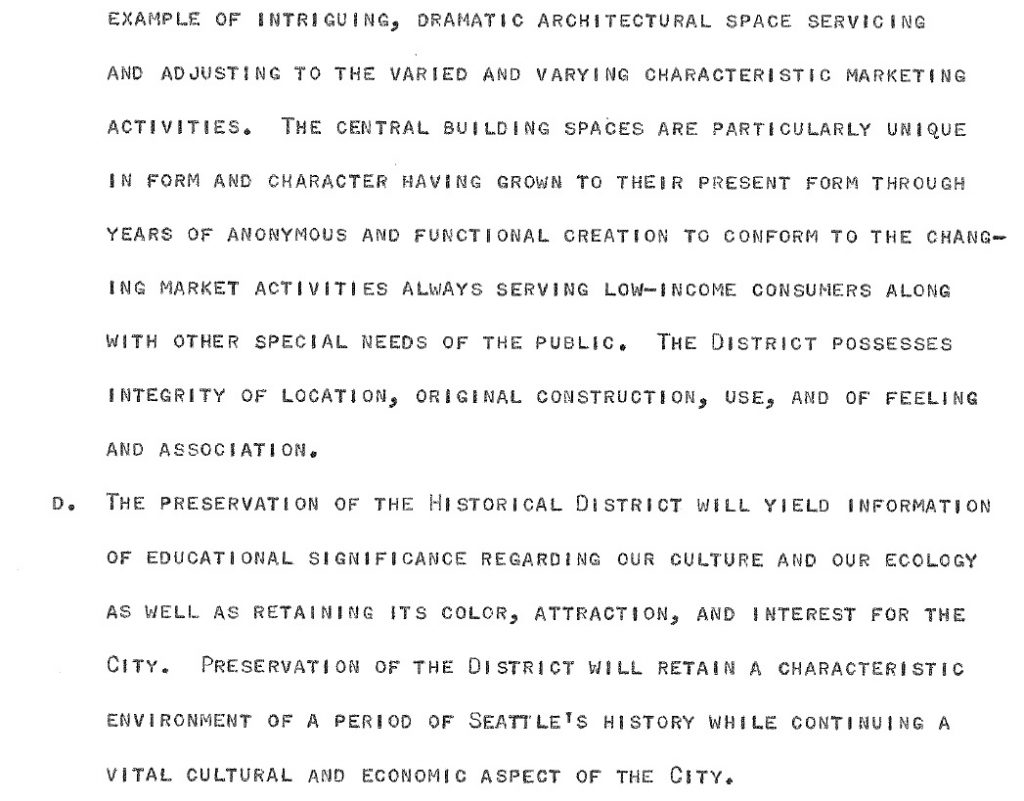 While there’s room for debate here about the extent to which cultural and entertainment spaces can be shoe-horned into the criteria, this section leaves little doubt that the main focus of the Market Historical District is to foster the marketplace, local farming, and small independent businesses — and a building structure designed to house those businesses.

The Commission’s up-to-date guidelines make it even clearer that it’s all about the market. It states the major goals of the Commission:

When making decisions on new or changing uses, the major goals of the Commission shall be to preserve the Market as:
2.1.1 A place for farmers to sell their own produce.
2.1.2 A place for local shoppers to do their food shopping.
2.1.3 A place where persons with low and moderate incomes can find affordable food, goods and services, and residences.
2.1.4 A widely varied shopping area with a diversity of many small, owner-operated specialty businesses.

It goes on to establish the priority uses within the district:

While it does say that performing arts and cinema “may be allowed in appropriate zones or locations,”  the guidelines have a lot more to say about the kind of businesses that should and shouldn’t be allowed into the district:

The Showbox is none of those things. It is run by AEG, a massive corporation that runs several venues in Seattle (plus Bumbershoot, and it will run the renovated Key Arena concert business as well) on top of dozens of other locations around the world; its local management have no significant “ownership interest” in the company; and the Showbox is much larger than 2000 square feet. But on top of all that, the Commission’s certificates of approval are non-transferable: even if the Showbox were “grandfathered in” to the Market district, if it every changed hands then the new owner would need to apply to the Commission for permission to run the business.

It’s very clear that the mission, structure and guidelines for the Pike Place Market Historical Commission are incompatible with a business like the Showbox. None of this implies that the Showbox isn’t worth saving; rather, it simply points out that pulling it into the Pike Place Market Historical District is a poorly-conceived way to go about it that is likely to backfire. It’s admirable that Sawant is looking for creative options to meet a policy goal, but this one isn’t well thought-out — and certainly shouldn’t be rushed through.

At today’s Council meeting, Sawant and her colleagues reached a tenuous compromise: the ordinance was referred to Council member Bagshaw’s committee, which handles landmarks and historic districts, but they committed to consider it in a committee meeting this week (most likely the scheduled Wednesday meeting) and report it back to the full Council next Monday for a potential vote before the Council goes into recess. Baghsaw and her staff were already hard at work this afternoon in trying to schedule representatives from SDCI and the Office of Neighborhoods as well as the Pike Place Historical Commission. They will doubtless want to also consider what it would mean for all the other adjacent properties that would get swept into the Historical District.

Both of these bills will likely be in front of the Council again next Monday.