Council member Mike O’Brien’s proposal to increase the number of mother-in-law apartments and “backyard cottages” has been on hold for over two years, since the Hearing Examiner ruled in late 2016 that a full Environmental Impact Statement was required. The final EIS was published last week, and once the inevitable appeals are dealt with that hurdle will have been crossed. But later this week, O’Brien’s office will hold a special meeting to discuss a Racial Equity Toolkit evaluation of the proposal that looked on how it will affect underserved communities at risk of displacement.

Let’s look at what the final EIS and the RET report say.

The Final EIS incorporated comments received on the draft EIS, and introduced a new “Preferred Alternative with tweaks on the two alternatives in the draft version. Highlights of the new preferred alternative include:

The preferred alternative is expected to produce 4430 ADUs by 2027 versus 1,970 under the current rules — more then doubling production. That won’t solve the city’s affordable housing problem by any stretch, but it’s still a contribution.  It is also predicted to reduce the number of teardowns of existing single-family housing between now and 2027 from 2,030 under the existing rules to 1,580.

The point of the EIS is to evaluate the impacts on the “environment,” writ broadly, of the proposal versus taking no action. The EIS analysis suggests the impacts — about 200 additional ADUs per year for 10 years — are mostly minor. Street parking is unlikely to be impacted unless ADUS are concentrated in neighborhoods — and they are expected to be spread just as they are today. The roughly 2000 additional ADUs are also not expected to impact public services and utilities: schools, sewers, power, water, etc. Overall, the final EIS concludes that the impacts will be “negligible when considered in the context of changes occurring throughout the city.” 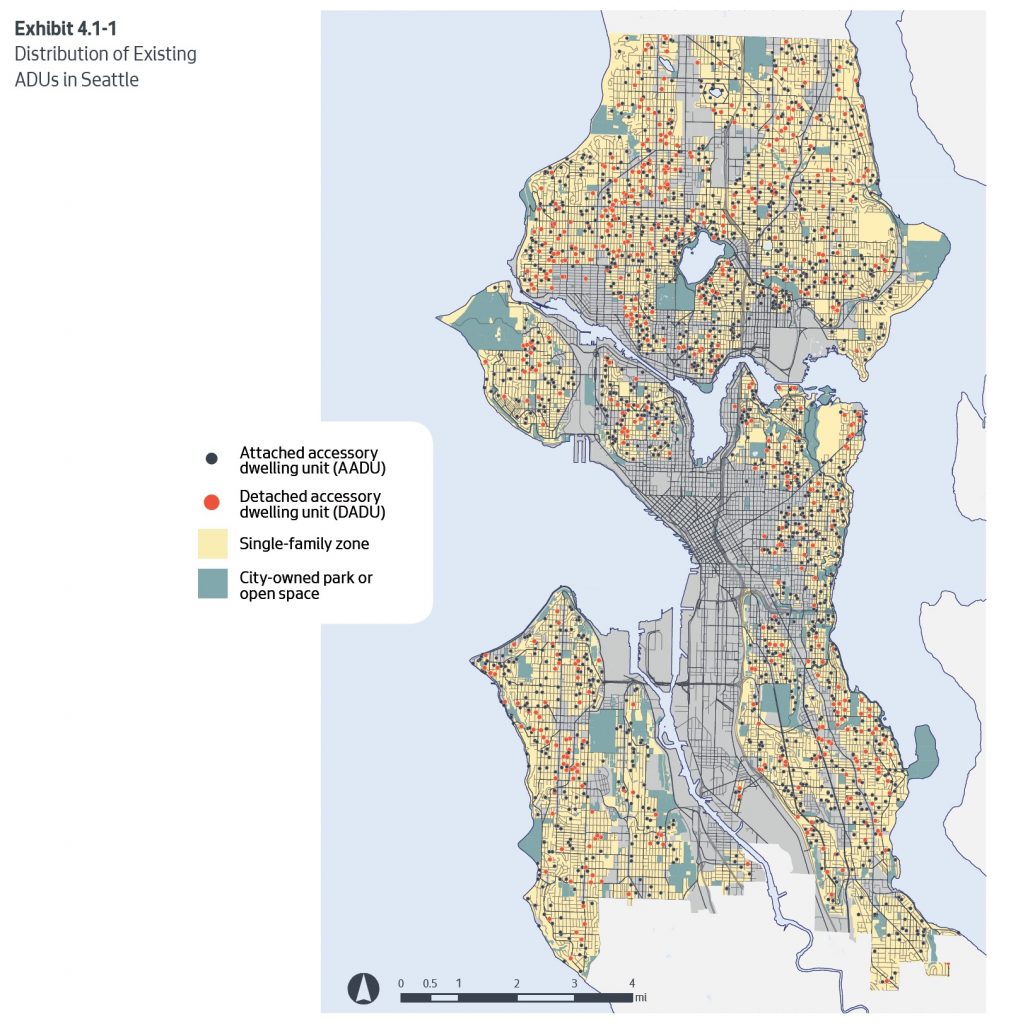 The Racial Equity Toolkit evaluation attempts to answer different questions, and in particular how the proposal will impact race-based disparities in the community.

On the positive side, it is expected to increase the variety of housing options in single-family zones, and could marginally reduce physical displacement by discouraging teardowns of existing housing to build McMansions, and economic displacement by relieving a bit of upward pressure on home prices and rents.

But it also suggested that the benefits to underserved communities might be limited, due to three factors:

The RET report concludes by noting that the city doesn’t have a comprehensive anti-displacement strategy, let alone an understanding of whether an ADU-focused program should be a part of that program. It also points out that homeowners in underserved communities rarely know about the existing city programs and services to help people stay in their homes, including the Office of Housing’s home repair and weatherization programs, and that increased community outreach around those programs might be a better value for many homeowners than trying to build an ADU.

The Sustainability and Transportation Community will discuss the RET report Friday morning. As for the Final EIS, any appeals must be filed by October 18th.