This morning Seattle City Council member Lorena Gonzalez confirmed long-standing rumors of her ambition for higher office by announcing that she is running for state Attorney General in the 2020 election.

She joins the Olympia game of musical chairs: if Jay Inslee, who is currently running for President, decides not to run for a third term as Governor, then it is widely expected that current Attorney General Bob Ferguson will run for Governor. That would leave the Attorney General seat open.

Gonzalez’s announcement today is well-timed to scare off other potential Democratic contenders from jumping in to an open race. On the other hand, if Ferguson doesn’t run for governor and instead runs for re-election as Attorney General, she would have a formidable — perhaps unbeatable — opponent in the Democratic primary.

The timing works well for Gonzalez, who is in the second year of her current term on the City Council and will not need to decide whether to run for re-election for that seat until after the November 2020 election. Currently, Inslee is rushing to meet the qualification criteria to participate in the third Democratic presidential debate; if he is unsuccessful, he may decide shortly thereafter to discontinue his run for President — and whether he wants a third term as Governor. Then the dominoes fall for Ferguson and Gonzalez.

In her announcement video, Gonzalez highlights her eastern Washington roots and her early career as a civil rights attorney fighting to protect migrant farm workers, as well as her work on the Council passing legislation to protect the rights of workers and members of the LGBTQ community and driving the police reform process.  However, she also co-chaired the Progressive Revenue Task Force that led to the “head tax” debacle last year, and she pushed through the Council the city’s contract with SPOG that Judge James Robart later found to be incompatible with the Consent Decree driving reforms in the Seattle Police Department.

UPDATE: Gonzalez tweeted out this morning that she will NOT run again Ferguson, if he decides to run for re-election as Attorney General. 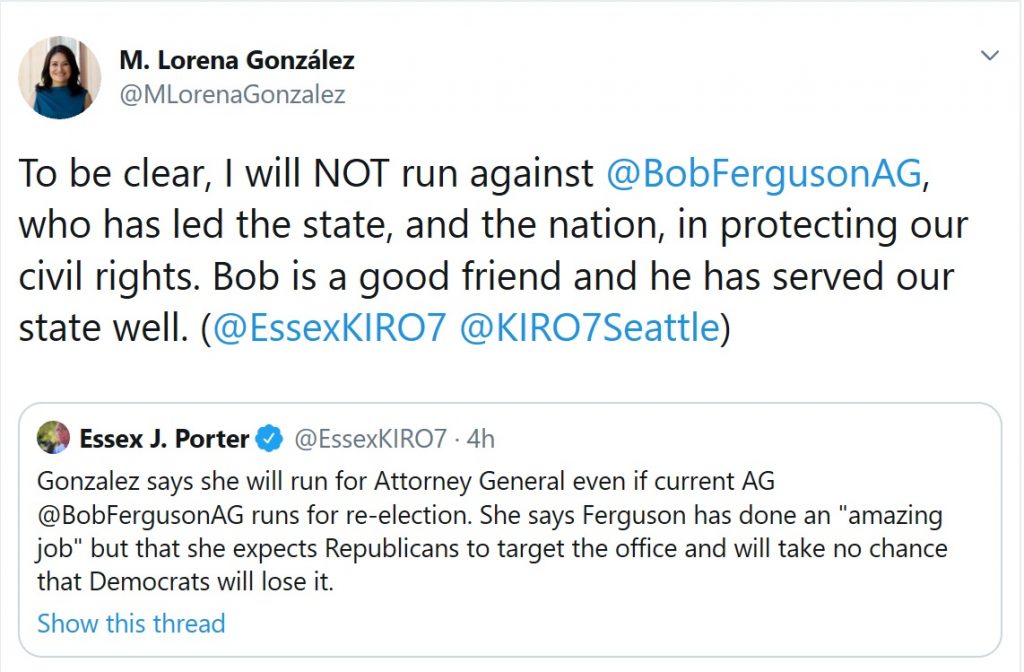