After yesterday’s press conference on the city’s response to I-976, I had a brief interview with the Council’s Budget Committee chair, Sally Bagshaw, in which she discussed her approach to dealing with the aftermath of Initiative 976 as well as the endgame for the Council’s 2020 budget. Earlier this week, Bagshaw released her “initial balancing package,” and her colleagues are now preparing their proposals (aka “Form C’s”) for the last round of edits to the budget before it’s passed later this month.

For context on the interview below: Initiative 976 cuts a $60 car-tab fee imposed through the Seattle Transportation Benefit District that raises $24 million per year for increased transit services and programs, and a $20 car-tab fee imposed by the city that raises $8 million for basic transportation maintenance services such as pothole repair. The Transportation Benefit District currently has a $20 million reserve balance that the city can tap into in the short term while it fights I-976 in court and plans a longer-term response, but the missing $8 million for basic services is a tougher problem for the city — and for the Budget chair — to solve. 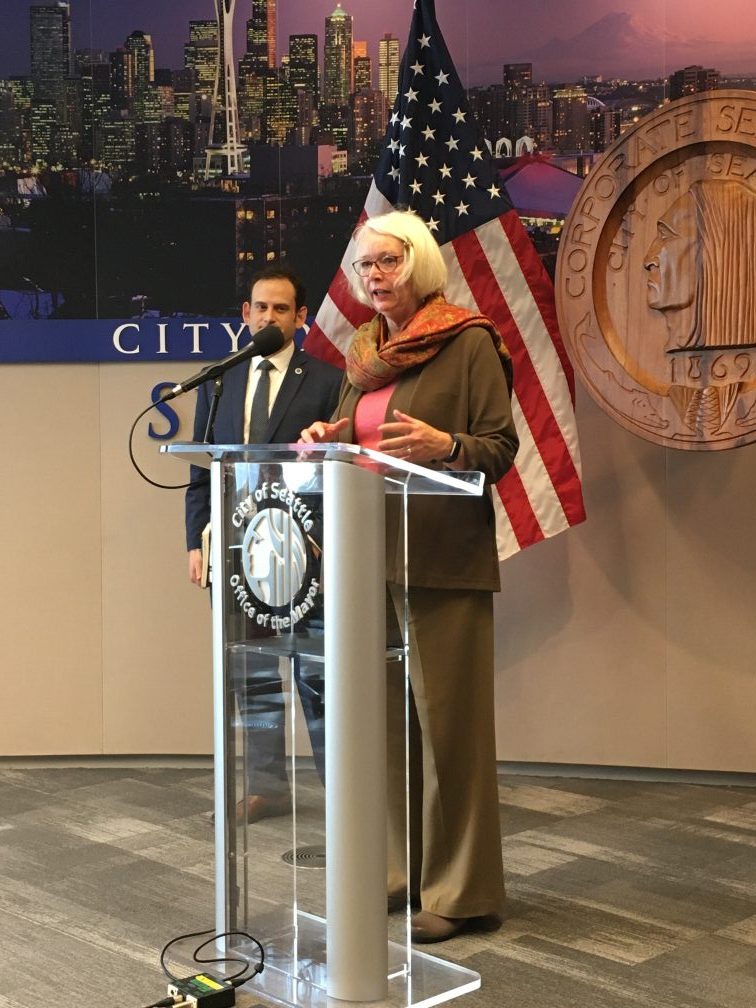 SCCI: Initiative 976 takes away $8 million in funding for basic transportation services through a $20 car-tab fee, and the Council needs to replace that. Where will the $8 million come from?

SB: Well, there’s one thing that we had raised a couple of years ago, and I think that’s still worth exploring, and that’s the unearned income tax. We think that that can raise a lot of money. My lawyers have told me, “just cool your jets on that, we’ve got to figure out what we’re doing with the income tax as proposed. But I think that this unearned income tax is something that would be perceived as being naturally progressive, that there’s money to be had, it’s constitutional based upon everything that we’ve learned, and I think that’s something that we can go after. I don’t like it, but you know, we’re looking at everything right now.

SB: Oh yeah, and we have actually, but it really brings in so little, and it has to be raised for future projects; we can’t go back. I would look at that, absolutely, but I don’t think that solves the problem. It’s a strategy.

SCCI: How much would the unearned income tax bring?

SB: I can’t remember. It depends. We could have a flat fee up to I believe 1%. I think the estimates were in the $40-50 million dollars, but I don’t want to give that to you and have you say “that’s the number.” I’ll have to go back and look at it again, it’s been a couple of years.

SCCI: When do you expect to have a proposal [to replace the $8 million in lost funding] — by next Wednesday?

SCCI: Do you expect other council members to come forward with proposals?

SB: No, I do not. And if we have to address it, it’ll be in January with the supplemental budget. That’s my plan. I’m really sticking with it, because otherwise they’ll start taking little peanut-butter parts and we’ll end up with nothing.

SCCI: More generally on the budget: what other proposals do you expect your colleagues to come back with in the next week?

SB: Actually, I’ve only talked to them about a few and there’s very little. There was a question about should we fund the Samaritan program. Council member Herbold was interested in taking money from the Streetcar to apply…

SB: … just generally speaking. But we don’t have that money yet. And we certainly cannot bond against it at this point. So I’m thinking that we’re not going to see major changes over this next week when we do the Form C’s.

SCCI: Do you feel the Navigation Team funding is secure?

SB: I am not backing away from that. And I believe I’ve got a majority of the Council agreeing with me.

SB: I do. And we do have to work out the permitting. But we’ve got a pretty good percentage of business community and neighbors saying they’re willing to allow this to stay there. It’s been well managed. So definitely we have to deal with the permitting, but I have faith that we can.