After several months of work, the city is ready to complete the next milestone toward putting the Waterfront LID in place. But one obstacle remains in its path. 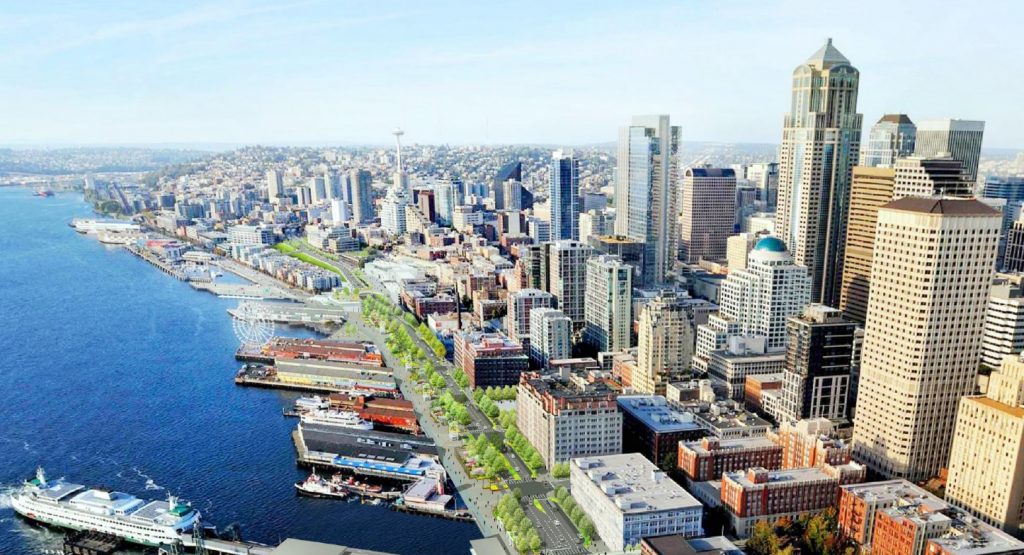 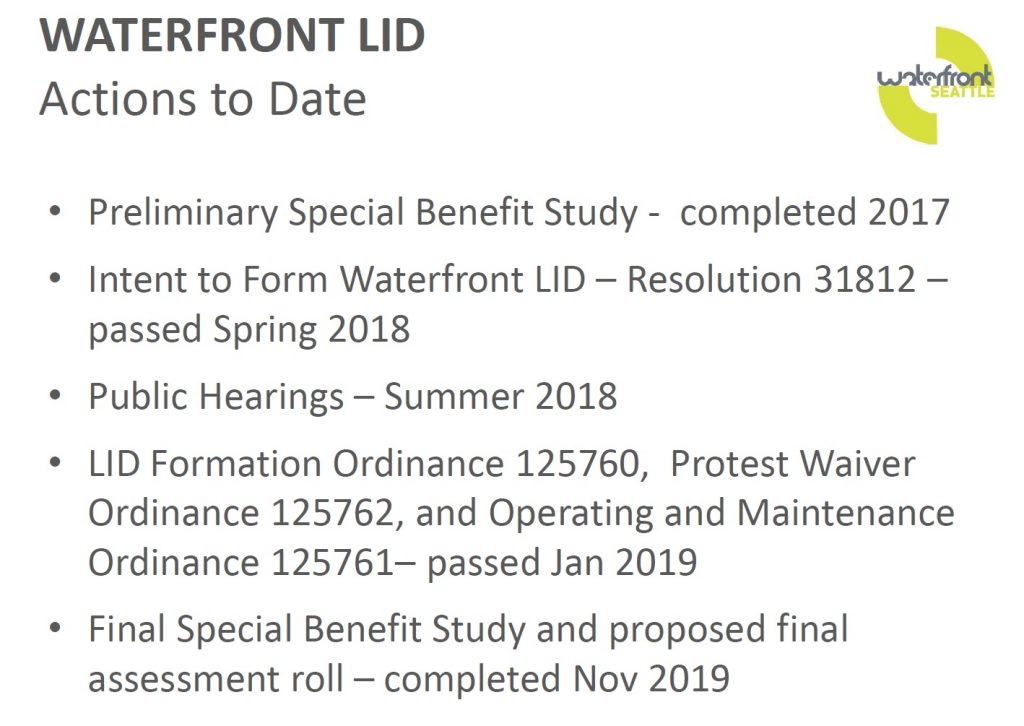 After the public hearing, the Hearing Examiner will conduct the public hearing and report recommendations back to the Council. then property owners can appeal to the City Council if they disagree with the Hearing Examiner’s recommendations, and the City Council will vote on whether to approve the final assessment roll. If all goes according to the city’ plans, this will all be wrapped up next summer. 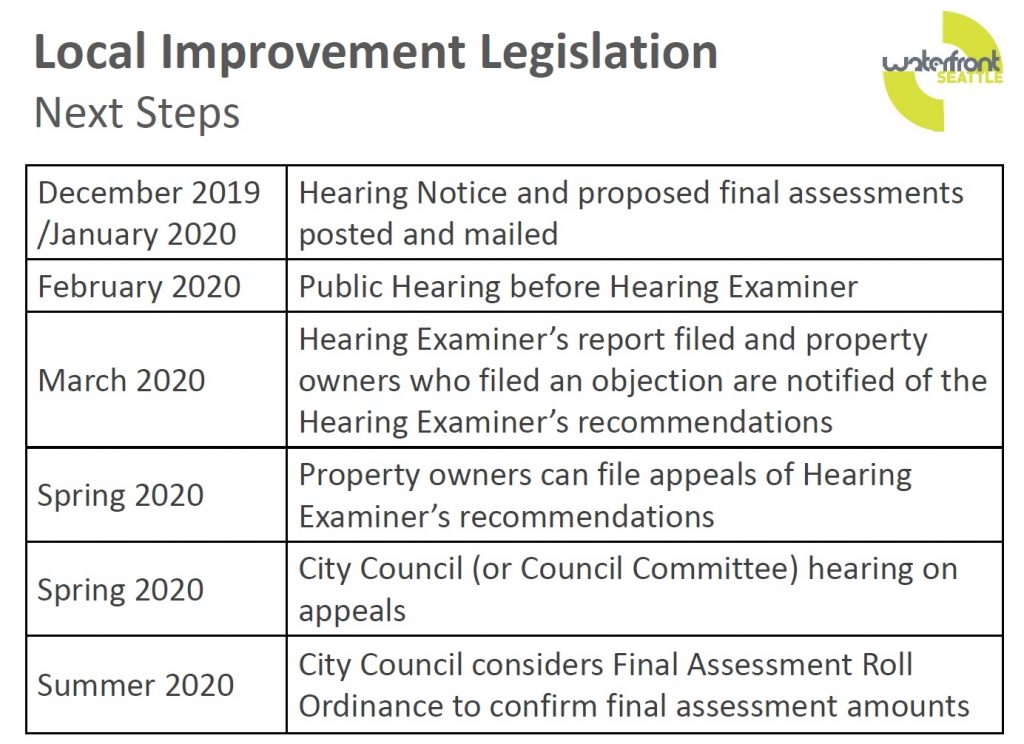 There is, however, one potential impediment remaining: a lawsuit challenging the Waterfront LID. As part of the LID establishment process earlier this year, the city negotiated an agreement with the owners of a plurality of the property not to object to the LID; under the law if a certain percentage object, it would scuttle the LID. But this is different: in this case, a collection of property owners are alleging that the process used to establish the LID violated the law, thus invalidating it. They allege one minor violation, and one major one. The minor violation is that the Hearing Examiner’s report to the Council on the Public Hearings leading up to the LID formation didn’t provide recommendations, as required by law; it simply provided a summary of the public comments. Technically, this is true; I suspect, however, that the Hearing Examiner is likely to say that he didn’t have any recommendations to make, and this will get waved away fairly quickly by the judge.

The more significant allegation is of multiple violations of the state “appearance of fairness doctrine,” which codifies how the Council members are required to act when deciding quasi-judicial matters that come before them. The Council decided that it would follow quasi-judicial procedure for the LID formation, which thus invokes the doctrine. Not only does that require the Council members to remain free from bias, but it also requires them to refrain from ex-parte communications with proponents and opponents of the matter up for consideration.

First, the lawsuit alleges that because the city internally borrowed money — the lawsuit claims $30 million — against future proceeds from the LID, the Council members were under pressure to approve it to cover the debt.

Second, it alleges that several of the Council members had prohibited ex-parte meetings with city officials at the Office of the Waterfront who are proponents of the LID. The Council members don’t dispute this, and a few days in advance of the final vote on the LID formation released a memo detailing those meetings in an attempt to “cure” the violations. The law says that the appropriate cure for an ex-parte communication is to fully disclose the communication, including its substance, and then provide the other party with an opportunity to rebut the substance of the communication. Just to be clear, here’s the sequence of events for the creation of the Waterfront LID in 2018 and early 2019:

In addition, the lawsuit alleges that through the discovery process (which is not yet complete) the plaintiffs have already uncovered fourteen additional prohibited ex-parte communications that the Council members have not disclosed and that weren’t listed in the January 25 memo.

The plaintiffs have filed a motion for summary judgment, asking the judge to invalidate the LID formation ordinance and send it back to the Council for a do-over. But a motion for summary judgment requires that the facts not be in dispute, and many of the facts the plaintiffs assert are very much in dispute here. The city has yet to file its brief in response to the motion, but one can expect it to raise that point, and insist that the case proceed to trial to resolve the facts in dispute.

The legal questions are also interesting, with a fair amount of complicated case history. At a high level, the standard for adhering to the appearance of fairness doctrine is straightforward and common-sense: “if a reasonably prudent and disinterested observer would conclude that all parties obtained a fair, impartial, and neutral hearing.” But that requires a tremendous amount of interpretation in the individual context of the case. And it’s interesting that the case law related to the appearance of fairness doctrine distinguishes “partiality evidencing a personal bias or personal prejudice signifying an attitude for or against a party as distinguished from issues of law or policy.” In other words, the Council members need to provide both proponents and opponents with the opportunity to speak, and genuinely listen to and consider both sides, but they can still have and act on their own views on the policy issues related to a LID. And that cuts at the heart of many of the plaintiffs’ arguments about whether the Council prejudged the LID: as long as they didn’t show bias toward or against either party during the proceedings, they probably haven’t violated the appearance of fairness act on the substance of the debate. That means that this case will probably be decided on the procedural issues of whether the Council did all the right things in the right order.

If the judge does, in fact, kick the Waterfront LID back to the Council for a redo, it shouldn’t delay the process that long; in fact, having a re-vote with a new Council in January without four of the six who are accused of ex-parte communications might just make the whole thing easier — assuming they can avoid creating any new ex-parte communications or appearances of bias.