This is the second in a series of articles drilling into the details of Mayor Durkan’s proposed 2022 budget. The first installment, looking at city revenues, is here, and the second part on the payroll tax is here. This installment dives into the expense side of the the budget: the Mayor’s proposal for department budgets.

There are 43 top-level “departments” in the City budget that collectively will spend $7.1 billion under the Mayor’s proposed 2022 budget. As with revenues, the division of money is very uneven. The top two spenders are the city’s two utilities businesses, Seattle City Light and Seattle Public Utilities; collectively they are $2.78 billion, which is 39.1% of the entire city budget. As discussed in previous budget articles, the utilities are a special case in the budget since they are run as separate businesses; the Mayor and Council have some say over how they spend money to run the business, but the revenues must stay in the businesses — they can’t be reallocated to other city purposes (other than by imposing utility taxes). 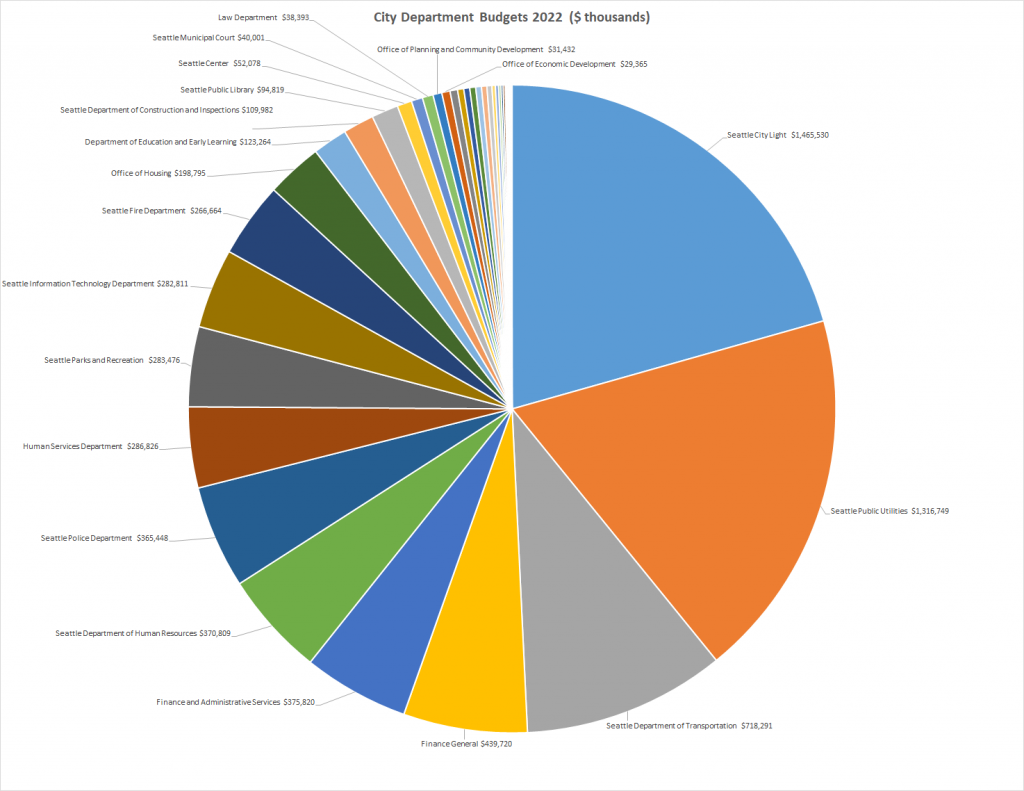 There are twelve other city departments each with budgets over $100 million, with SDOT being the largest at $718.3 million.  Together these twelve add up to $3.82 billion, or 53.8% of the entire budget.

There are fifteen departments with budgets between $10 million and $100 million: altogether $457 million, 6.43% of the budget.

Here’s the full list of city departments and their budgets for both 2021 and 2022: 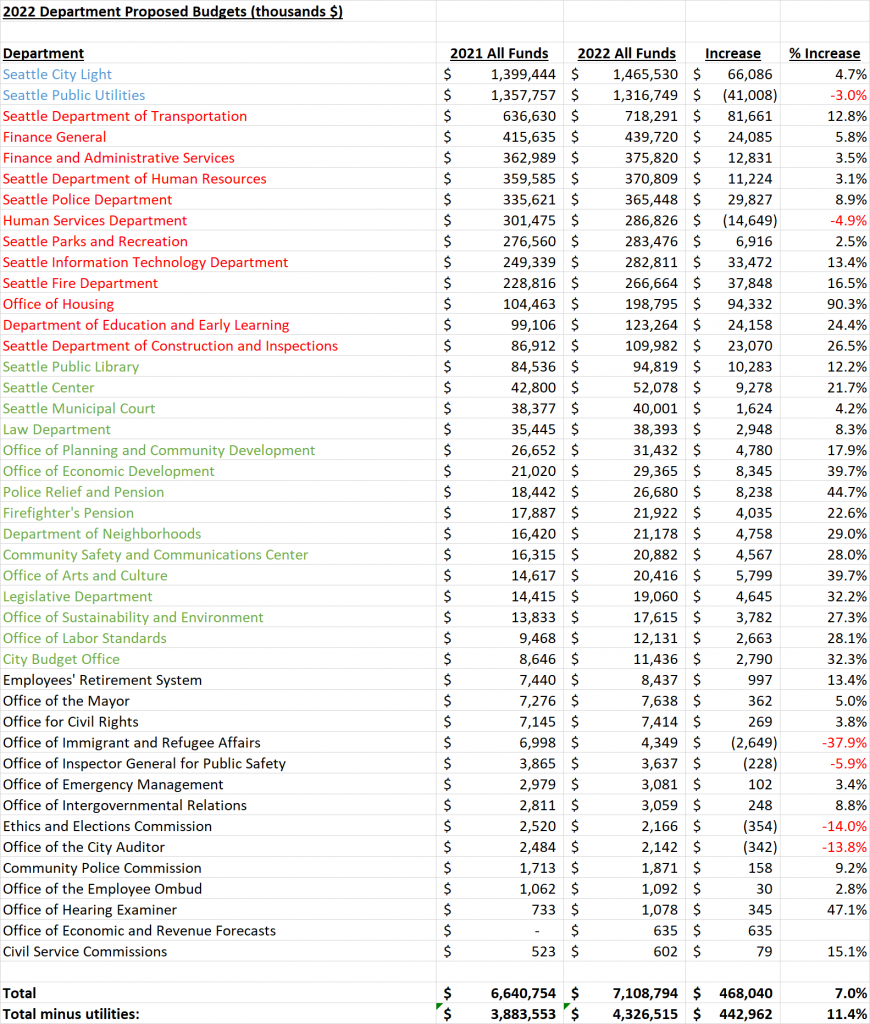 Recognizing the widely varying sizes of departments is important because it determines what constitutes a meaningful change to the budget numbers. $100,000 is a big deal for a department with a $2 million budget, but it’s a rounding error for SDOT. Similarly, if you are looking to find $10 million to fund a new program, there are only a handful of departments whose budget could manage such a large cut. Also of concern: arguably many of the smaller departments probably don’t have the internal capacity to manage an increase of $10 million to their budget, so where the money is allocated also matters.

We also need to consider “the color of money.” Many departments have some mix of unrestricted “general fund” dollars that can be repurposed, and funds that have restricted uses. Moving money from one department to another — or even between budget line-items within the same department — requires understanding if the revenues funding those dollars allow for the proposed new use. Here’s another look at those 43 departments, and their split of general fund and restricted-use funding: 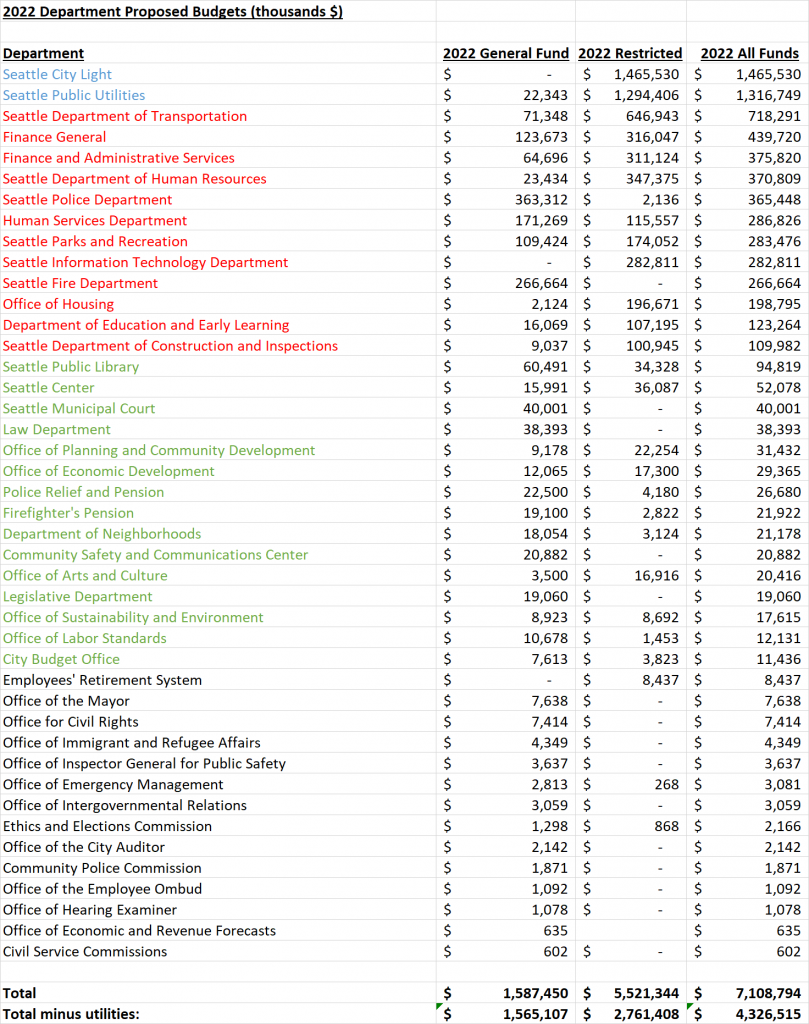 A few departments immediately jump out as being lopsided. SDOT is almost entirely restricted-use funding; that’s a combination of voter-approved levies, REET, and federal and state grants.  On the other hand, the police department is almost entirely funded with general-fund dollars; that’s good news for those who would like to see some of SPD’s budget redirected to alternative public-safety programs. Other departments that are heavy on restricted-use funds include:

With that baseline, we can start to look at what significant changes the Mayor is proposing from the 2021 budget. And generally there aren’t a lot. With the recovery in revenues as the economy comes back to life, the Mayor is proposing to restore funding cuts made in 2020, particularly to the Parks Department and Libraries, to return them to pre-pandemic levels. Other notable changes:

Overall, the Mayor’s proposed 2022 spending plan is not that headline-grabbing. There will no doubt be a fight over how to spend the payroll tax dollars, and words will be exchanged over SPD’s budget, but beyond that the changes are mostly uncontroversial and the Mayor chose to fund many of the things on the Council’s wish-list.  Most of the large departments see modest budget increases that reflect the recovering city revenues and cost-of-living adjustments, and are in-line with past years (see chart below).  The budget deliberations tend to be easier in the years where revenues are increasing, and this year appears to be no exception: there is a very large pot of new revenues to be spent, enough for the Mayor and the Councilmembers to cover many of the items on their wish-lists. 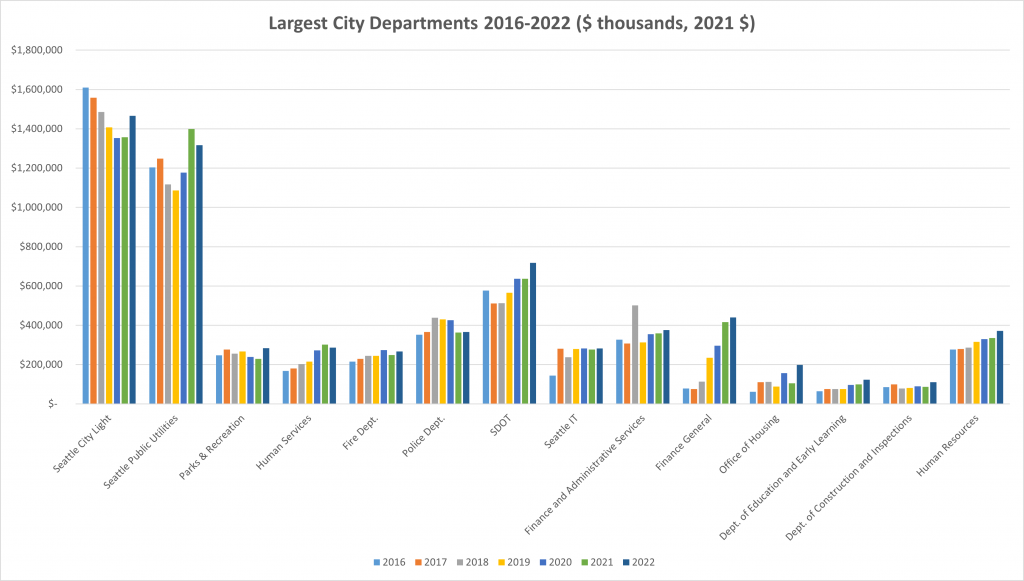 Next up: a deep-dive on SPD’s budget, and on other public-safety investments.