This is part 2 in a 3-part series looking at NCIS, the new customer service and billing system for Seattle Public Utilities and Seattle City Light. This post looks at how IT support is being reorganized within the City of Seattle’s departments.

Of course, the job isn’t done on Tuesday morning when NCIS goes live. There will be bugs to fix, additional features to add (including the CSS “customer self-service” web portal which was largely punted until after launch), and surprises that need to be addressed. For the first six months after launch, which is called the “stabilization phase,” the existing team will continue to support NCIS; that team includes the external contractor, Price Waterhouse Coopers. I reported back in May that the city was in the process of drafting an RFP for continuing support of NCIS after the stabilization phase; unfortunately that has been stuck in the city’s procurement bureaucracy, so there is still no plan in place for exactly who will provide ongoing support past March.

That alludes to a bigger issue in play: the consolidation of IT staff and resources from 15 separate IT groups spread across city departments. Of the 750 IT staff employed by the city, 650 have been brought together under the new SeattleIT department — including all of SPU’s and SCL’s ( the legislative and judicial branches have their own separate IT staff). Michael Mattmiller, the city’s CTO and the Director of SeattleIT, told me in an interview last week that his department, now five months old, is still in the process of becoming a single IT department that supports the whole city. While they launch Seattle’s new Next Generation Data Center (NGDC), consolidating servers from over 10 different locations, he is still working out the “intake process” for taking responsibility for all of the legacy applications and systems that his staff managed before the reorganization.

Where the rubber hits the road is when it comes down to priorities: how much support does each department get now that IT is a central resource that must be prioritized and, to some extent, apportioned out? All of the city employees who worked on building NCIS now work for Mattmiller; how many of them will continue to work on it, or other SPU and SCL related projects? Mattmiller’s starting point is to promise each department an equivalent quantity of IT support as it enjoyed before the consolidation.

SPU, SCL and SeattleIT just signed an agreement laying out responsibilities across the three departments for customer service, billing and NCIS moving forward. Briefly: SPU will continue to run the call center, SCL will manage billing operations and “customer care” activities like setting up new accounts, and SeattleIT will provide IT support, maintenance and future enhancements to NCIS   (previously SPU ran the call center and SCL developed and ran the billing system). According to the agreement, the projected budget for ongoing support and maintenance of NCIS in 2017 will be approximately $1.1 million. But as I said above, that doesn’t mean that SeattleIT’s own staff will do the NCIS support work; it likely will still get outsourced to a third-party, since SCL’s IT staff wasn’t up to the task on their own originally and consolidating them into a single department doesn’t magically “level up” their skills. 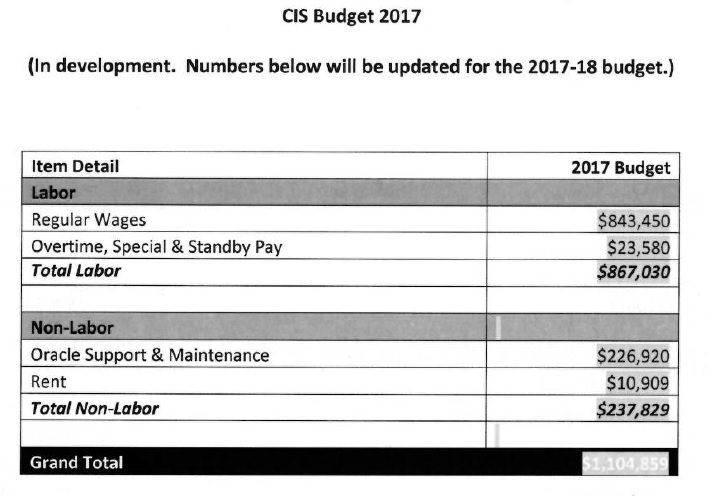 It’s worth mentioning that the SeattleIT consolidation isn’t just a reshuffling of management chains; it’s a sincere attempt to enable the city to make city-wide technology and infrastructure investments rather than having 15 smaller teams doing their own thing and duplicating efforts. For example, currently several departments have their own work-order and asset management systems, including SPU, SCL, SDOT, and the Parks Department. There are efficiencies to be gained by reducing the number of separate systems; it may never get to one, but every bit helps and creates opportunities for both cross-department cooperation and reduced support overhead.

Of course, with centralization also comes its own bureaucracy. The Mayor has an IT Subcabinet, which meets quarterly to discuss where city technology is going. And last month, Mattmiller stood up a new Business Steering Committee of CFO-level leaders from across city departments, which is focused on the day-to-day IT needs of the city and will approve new IT system requests. He isn’t clear yet as to what the threshold will be for when a system needs to be approved by the Steering Committee; on one hand, there are currently 170 active IT projects in the city and he believes city staff should be more thoughtful about which projects to take on; but on the other hand, requiring small projects to gain approval from a panel of department CFOs will slow things down mightily in city government.

So at this point it’s unclear not only how NCIS will be supported moving forward, but how the next large IT project (whatever it might be) will get proposed, designed, implemented and supported. If Mattmiller has his way, there will be more people, from across city government, involved in the IT decision-making process. In the immediate term, he has kept the legacy IT groups’ directors tasked as advocates and coordinators for the needs of their previous departments — even though they no longer have IT staff reporting to them.

Part 3 tomorrow: the budget process is fundamentally flawed, and contributed to NCIS’s problems.