If you think the Center City Connector streetcar project got put on hold because it’s overbudget, then you misunderstood what just happened. It’s on hold because the city doesn’t know how much it will cost, either to build it or to run it. It also doesn’t seem to be sure how much funding there is for it.

The problem here isn’t that the streetcar is a bad idea (though some people certainly believe that). The problem is that SDOT is a mess and incapable of managing the project.

You know you’re in trouble when the City Attorney shows up for your streetcar briefing.

This morning Interim SDOT Director Goran Sparrman and City Budget Director Ben Noble gave another briefing to the City Council on the troubled Center City streetcar project, after Mayor Jenny Durkan announced last Friday that she had paused the project until an independent, third-party review of the operating plan could be completed. Actually, she announced the review two weeks ago (without pausing the project), and the consultant who will complete it hasn’t even been hired yet — though they now have a scope of work defined for the consultant to work from. But since then, and even without the consultant in place, Sparrman and Noble have already found enough evidence of problems to apparently warrant stopping the project.

City Attorney Pete Holmes joined the Council briefing too — never a good sign. That means there aren’t just fiscal problems; there are also legal problems. Holmes, Noble and Sparrman were very guarded in what they would say in open session this morning, which means we can only guess at what they’ve found. The best case (which isn’t that good) is that it’s a personnel issue, some people will need to get fired, and they are proceeding carefully to avoid wrongful-termination lawsuits.  The worst case: they discovered that SDOT knowingly misled the federal Department of Transportation regarding the details of the project in order to secure the $83 million of federal funding that has been granted. That puts at risk not only those funds, but the city’s ability to apply for future federal funds — at a time when Trump would like nothing better than to deny all federal funds to Seattle because of its “sanctuary city” policies.

So what do we know? First, that there is a major disagreement on the annual operating costs for the streetcar once it’s built. According to the memo that first sent us down this rabbit hole, Metro thinks it will cost $24 million per year; SDOT thinks it’s more like $16 million, and has built the operating plan around that assumption. The plan was for Metro to operate it on SDOT’s behalf (as they do now with the First Hill and SLU streetcars), and the final figure is a matter for negotiation between the two. But there is evidence that SDOT concealed the fact that Metro was not onboard with the $16 million figure when the Council was writing its budget last fall. $8 million in additional annual operating expenses is a big deal for the streetcar– especially when the existing lines have consistently failed to hit their own revenue goals.

Between the letter that Deputy Mayor Mike Fong sent to the Council last Friday and the update that Sparrman and Noble gave them this morning, we know that there is a “notable capital cost shortfall” in the plan to build out the new streetcar line. Noble, Sparrman and Fong all say that the gap is about $23 million (that they know of so far). What’s less clear is where that figure came from, because nearly every document on the project quotes different numbers.

On the other hand, the “Center City Connector101” presentation from the official web site for the project say that the project cost is $177 million. 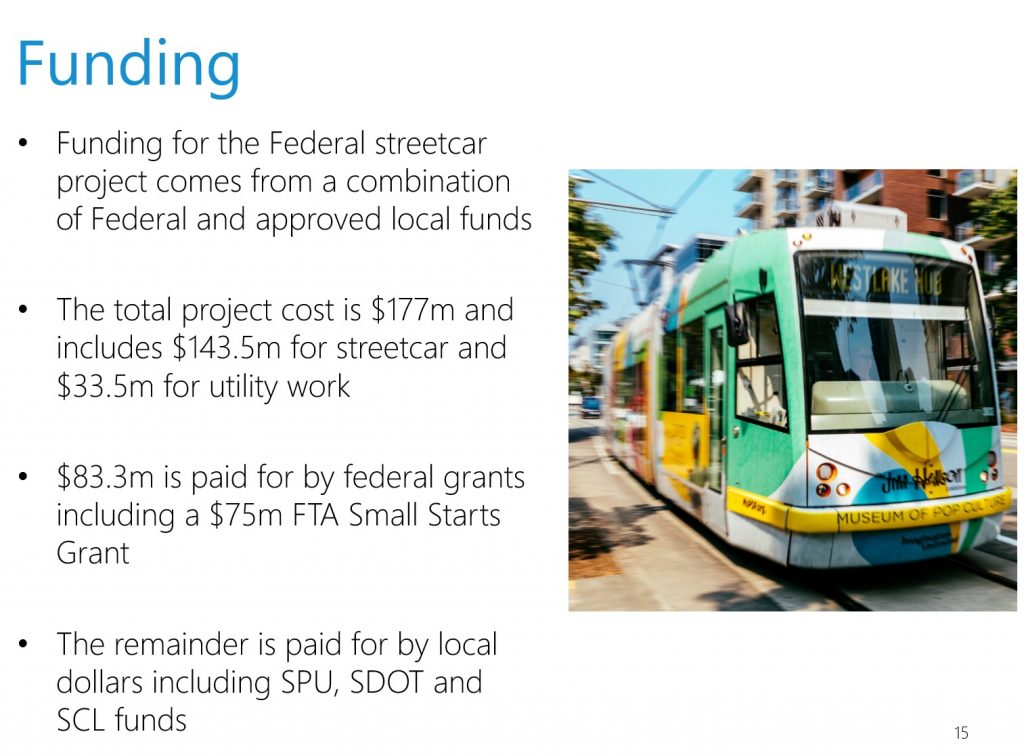 And this morning Noble and Sparrman quoted the cost at $165.7 million. Perhaps there’s some magic combination of these quotes that aligns them all, but I haven’t found it yet. 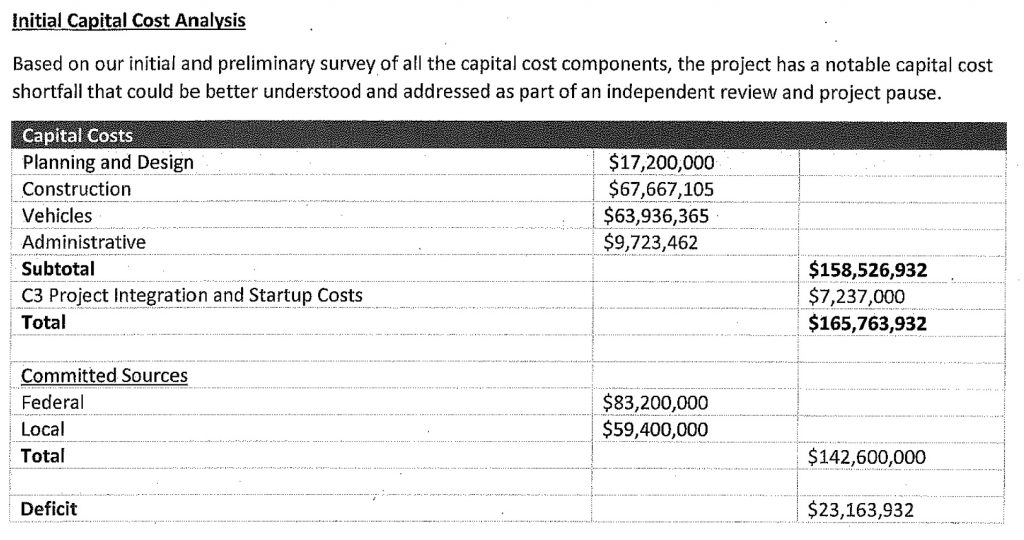 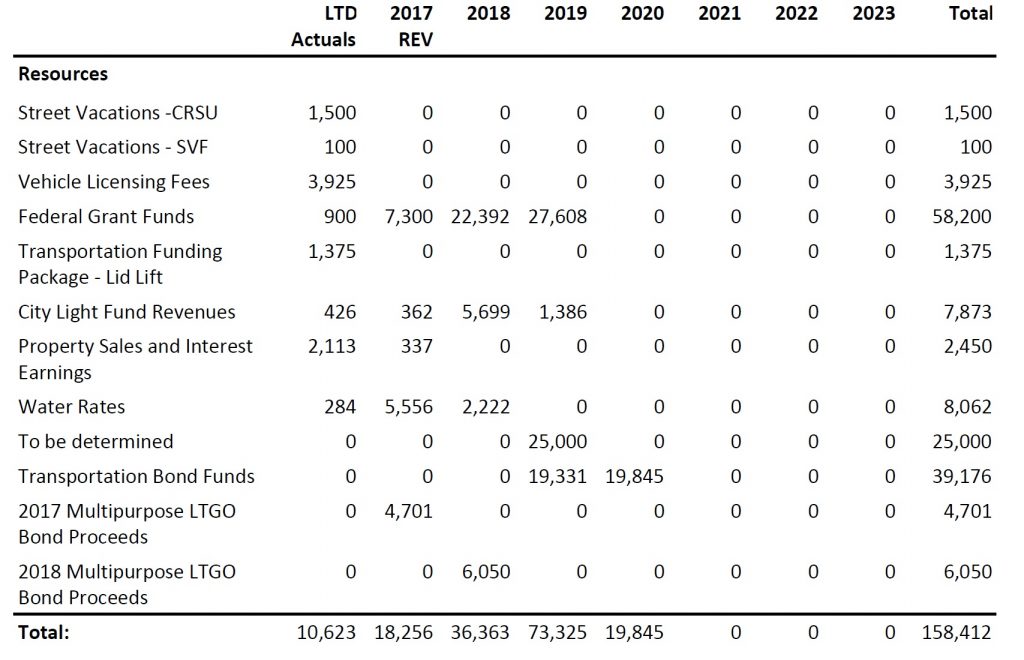 The good news is that everyone agrees there’s $83.2 million in federal funds. The bad news is that apparently no one can agree how much the city is on the hook for to fully fund the project. Worse: if Noble and Sparrman’s latest figures from this morning are correct and there is only $142.6 million secured, that’s below what the CIP says there should be — and below the lowest estimate for the project cost.

When Noble and Sparrman said there was a “notable capital cost shortfall” in their memo, they were choosing their words carefully. It looks like there are both ballooning capital and operating costs AND a revenue shortfall. And neither are well understood.

But wait, there’s more bad news. By delaying contract orders for rails, track, cars, and project planning and administration, the costs of those items increase with inflation. The city’s initial estimate is that if the delay is six months (and then the project is restarted), it will cost the city somewhere between $9.9 million and $13.6 million.

This isn’t the first time the city has had a major capital project go wrong; just recently, the city’s utilities had a similar disaster with their NCIS billing system, and FAS had an even bigger mess with the proposed North Precinct police station. And of course SDOT had the Pronto bike-share system debacle, where costs were high, revenues were low, and the department moved money around internally to hide the problems from the City Council (sound familiar?). This morning, Sparrman noted that he was reviewing project management overall within SDOT.

As I’ve written before, the way the city plans major capital projects is broken, requiring cost estimates far in advance of when accurate numbers could be developed. The last two times a major capital project overran, the Council asked Noble to revise the capital planning process to include stages and use external third-party expert validation for cost estimates. Noble noted this morning that work is underway but not yet complete.

Nevertheless, SDOT is squarely to blame here for creating another mess. Again, the issue isn’t that project costs have overrun the budget; the issue is that no one knows what the project costs are, nor apparently how much funding is available. That raises the larger question: why should SDOT be trusted to manage a project like the Center City Streetcar? Under former Director Scott Kubly, SDOT made a hash out of a long list of projects, including Pronto, the 23rd Avenue rebuild, the city’s bike network (which it insisted in building out in disconnected pieces), the mess of potholes around the city last spring, the First Hill and SLU streetcars which are perpetually stuck in traffic, the First Hill streetcar brake failure and blocked highways, and now the Center City streetcar project.  Sparrman is right to take a good, hard look at reforming SDOT’s project management capabilities, and it’s good that the scope of work for the independent consultant review includes broadly looking at most aspects of project management for the streetcar.

While we’re at it, Crosscut reports that SDOT employees “perceive a workplace that discriminates against women, plays favoritism in hiring, limits opportunities for voicing concern and lacks communication between management.”

But the Council is hardly blameless. The Council members pound their fists when projects go wrong, but otherwise they have been lacking in their oversight duties in ensuring that SDOT is actually competently run. O’Brien and Johnson, respectively the chair and co-chair of the Sustainability and Transportation Committee, have preferred instead to use their roles to push through pet projects: for O’Brien, the Burke-Gilman Trail “missing link;” and for Johnson, parking reform a la Donald Shoup and pushing through a redesign of 35th Avenue NE, despite strong, vocal opposition from the neighborhood community and businesses. O’Brien and Johnson have lobbied hard for the streetcars, and it’s worth asking whether that blinded them to problems they should have spotted earlier –or prevented them from asking hard questions along the way.

It seems clear that there is some major house-cleaning in SDOT’s future, though it’s unclear whether Sparrman as interim Director will be the one to do it, or if that duty will fall to whomever Mayor Durkan hires permanently.

I’m still working on reconciling the various budget numbers, and am waiting for information from the City Budget Office. I’ll post an update later this week when I will hopefully have a better understanding of where the “notable shortfall” is.