Since the 9th Circuit Court of Appeals handed down a split-decision last fall, the U.S. Chamber of Commerce’s legal challenge to Seattle’s ordinance granting collective-bargaining rights to Uber and Lyft drivers has been back in the hands of the district court. But it’s proceeding in starts and stops, with the occasional flurry of motions and other legal filings. Today a joint status report filed by the parties extends that pattern.

In December, the parties agreed to pause the schedule for filing briefings while the City Council deliberated on a modification to the collective-bargaining ordinance. That ordinance was passed by the Council last week, stripping out references to compensation in an attempt to avoid running afoul of the Sherman Antitrust Act. With that done, the parties have proposed a new case schedule.

You may recall the City of Seattle argued that it has “state-action immunity” from the Sherman Antitrust Act; the 9th Circuit disagreed, and sent the case back to the district court for a trial on whether the ordinance actually violates the Sherman Act. The plaintiffs intend to file a new motion for summary judgment; the status report doesn’t let on as to what their argument will be, but they have suggested in the past that they believe the Sherman Act still applies — even with the compensation issues stripped out — and the ordinance is thus illegal. 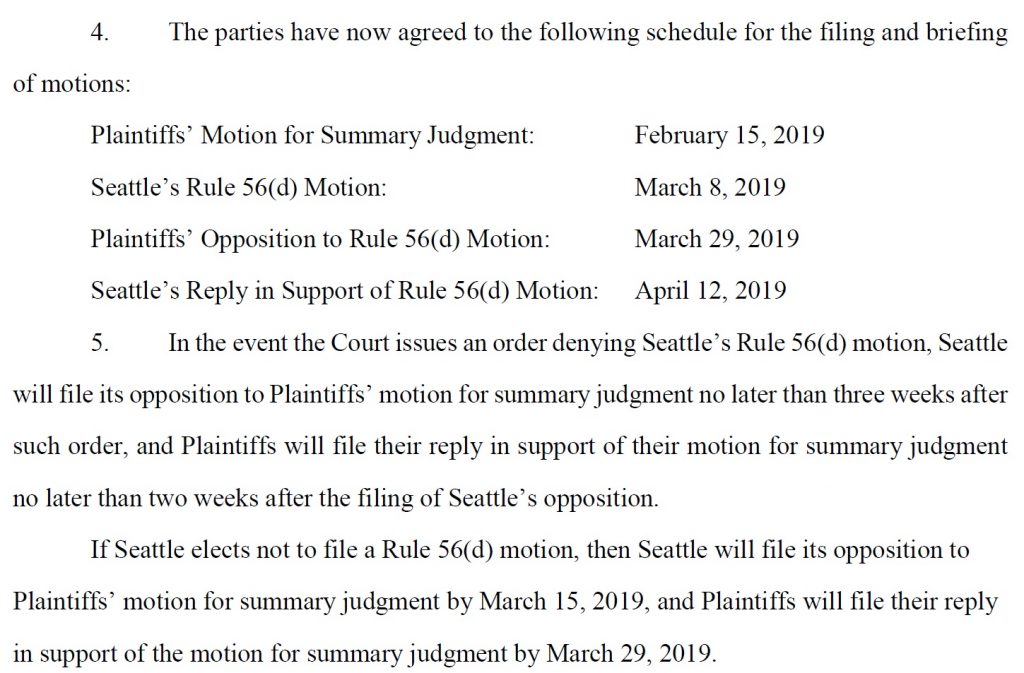 This looks like it will take all winter and spring — and longer if the judge allows time for discovery. Get comfy, we’re going to be here a while.

And in case you had forgotten, the original Uber/Lyft driver collective-bargaining ordinance was passed by the Council in December 2015. Three years of legal proceedings, with no end in sight.